I generally go for laid-back brunches—chill outings that are within a few blocks of my apartment, where no one blinks if I happen to roll up, desperate for coffee, in an outfit that’s as comfy as pajamas.

So when my brother recently descended on New York for some much-needed sibling time, I thought I was being shrewd by accepting an invitation to try a Japanese brunch. This will suck up the hangover, I thought. It’s surely a tiny, cozy hole-in-the-wall with plenty of miso soup and rice dishes. 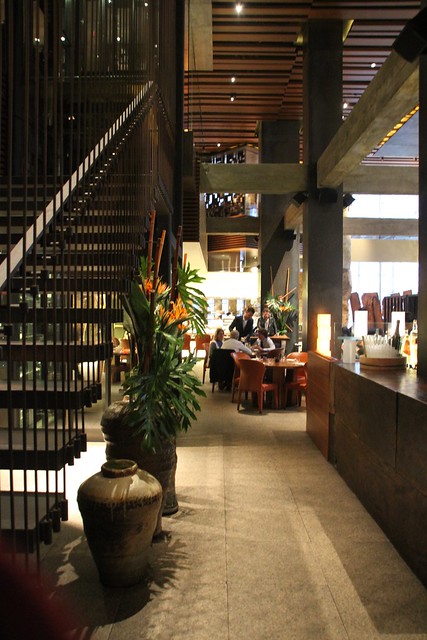 I knew I was wrong when the cab kept speeding up Madison Avenue in the pouring rain, past Gramercy, up into Murray Hill, and into Midtown, dropping us off in front of huge, heavy double wooden doors. Like the entrance to a Game of Thrones nightclub.

We both looked at one another, and at our sad Sunday attire, and shrugged. Behind those doors is one of the most stunning restaurants I’ve stepped into in New York. It’s not just sleek and well-designed, immediately enveloping you in a haze of expensive calm, but it’s also huge—enormous. 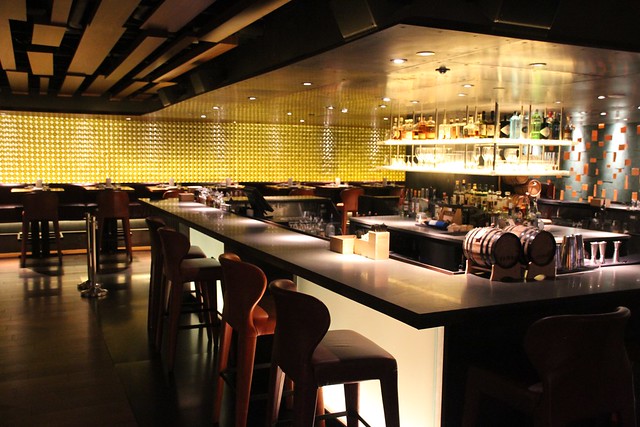 There are multiple floors, a grand staircase, two big bars, and rooms and rooms and rooms of private dining areas and spaces for private parties, each of which have a kitchen. It’s like four beautiful restaurants in one enormous Midtown space; the perfect place for a large client dinner or work event (note to self). 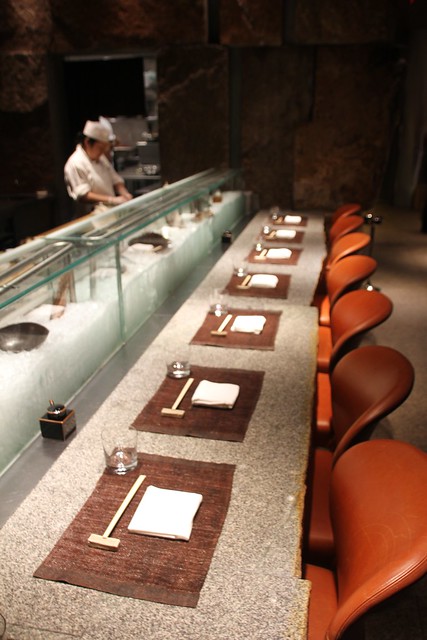 A range of wood was the builder’s choice; beautiful carved wood of all kinds from the floor, seating, staircases and cavernous hallways, making the space intimidatingly beautiful. We were seated in an alcove made of dark steel and cushions, like a brunch bird’s nest. Then we waited for the magic to begin, cautiously eyeing the sushi chefs, the bartenders, the other (very fashionable) guests, and the leather-clad DJ bopping in the corner. 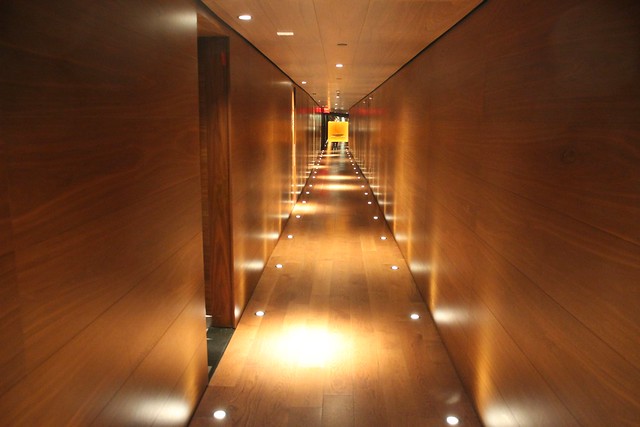 The brunch is upscale, and the menu is a prixe-fixe on par with an extravagant Saturday night dinner: $59 gets you three courses, all of which are designed to share among the table. You can add unlimited drinks to that for another $55—woah.

The cocktail list is perfect, offering sparkling, a Bloody Mary, a bellini and a unique punch for good measure. The Bloody Mary was delicious, made with organic tomato juice, wasabi, cucumber, horseradish and spicy chili, delivering a great kick. 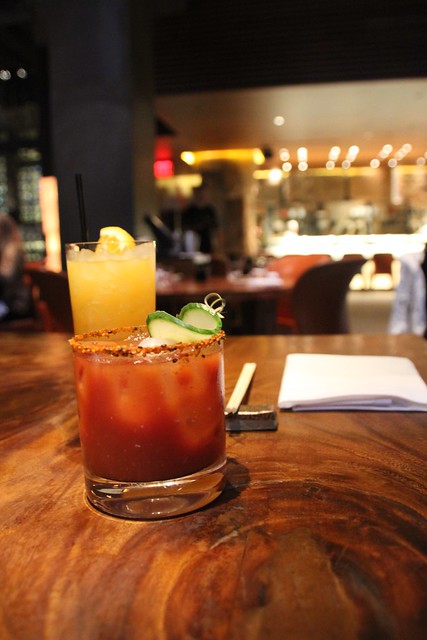 The punch, made with vodka, mint, blood orange, mandarin puree and yuzu, was sweet; more of a summery drink. But some at the table found it refreshing.

Because we were guests of the restaurant, we didn’t have to make the hard choices on our three courses, but instead got to try nearly everything on the menu—a parade of modern Japanese cuisine that nearly beat us. This is the “omakase” tradition of Japanese cuisine; the chef makes the choices. And we were in good hands at Zuma. 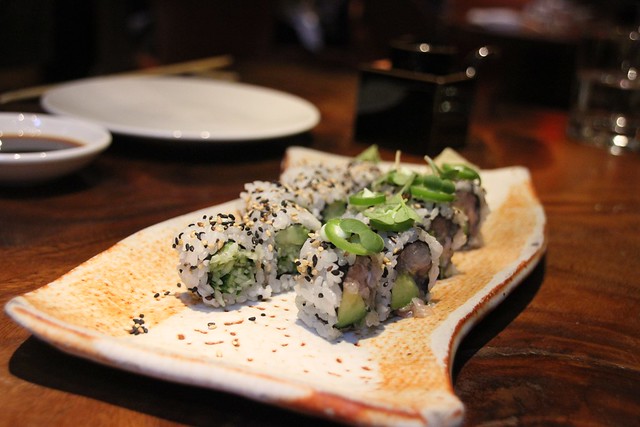 The first few courses were impressively delicious, packed with flavor combinations that were not only unique together, but unique for brunch. For instance, the Kureson to Kyuri no Salada looked like a simple green salad, but hidden in those greens were avocado, wasabi, cucumbers, and a lime dressing—a fantastic monochrome medley that became an unexpected favorite.

Some dishes arrived on sculpted stone bowls of ice, like the oysters with ponzu and serrano peppers. And the appetizer selection that featured little rolled pieces of sake no teriyaki, seared salmon with shiso, lime-soy, black sesame and mustard miso, was so stunning, we didn’t want to eat it all. (But we got over it.) 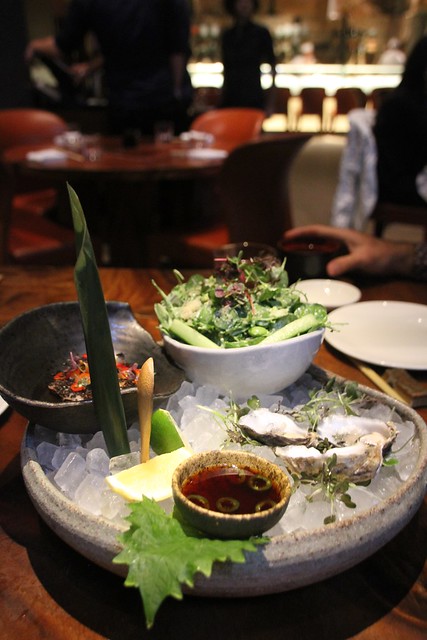 Even the small plates that seemed expected, like the yakitori-negima yaki chicken skewer, arrive with twists like baby leek. The ebi no tempura rock shrimp with lime and chili tofu; hot, fluffy and crunchy. And you may have seen prawns before, but the Zuma version is the jumbo tiger prawn with yuzu pepper is a small meal in itself. 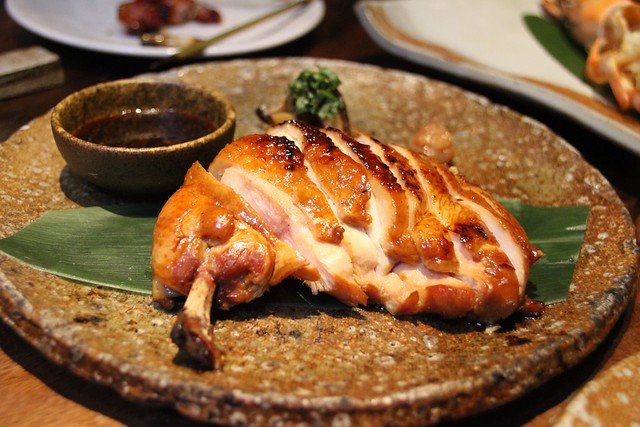 Despite the twists and the originality, there is a confidence in every dish at Zuma that reflects the chef’s commitment to quality. The entrees followed suit.

The chicken breast teriyaki with shiitake and shiso was a spread of tender and well-flavored slices. The black angus skirt steak with spicy shiso was well flavored, but was not the strongest offering, surprisingly. One of the table’s favorite entrees was the velvety yaki black cod, marinated in saikyo miso. 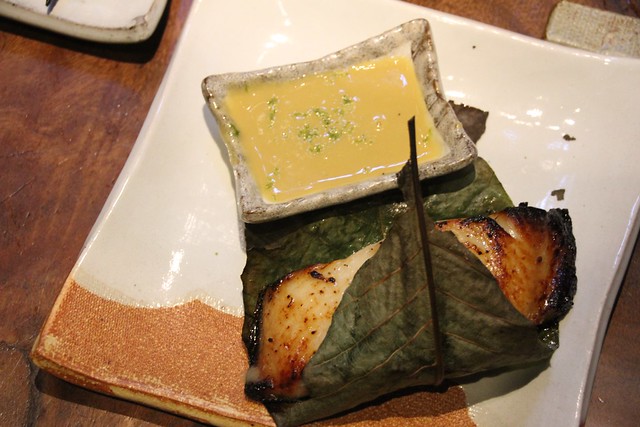 The most theatrical entree was the rice hot pot with wild mushrooms, Japanese vegetables and black truffle. A server arrives with a tray of ingredients and a steaming hot stone pot, into which he adds the mushroom mix, rice and spices, before shaving fresh black truffle over the combination. Rich and warming, it was a great side for the accompanying meats. 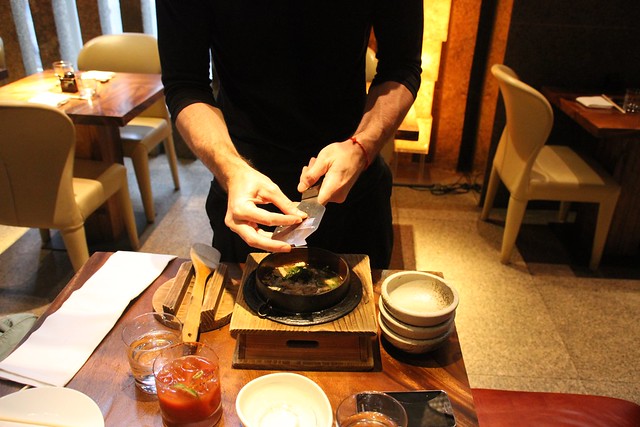 Thoroughly impressed and satiated at this point, Zuma capped the experience with a towering dessert platter. We’d see this delivered to nearby tables and hoped for one of our own. It was, by far, one of the most impressive desserts I’ve ever had. 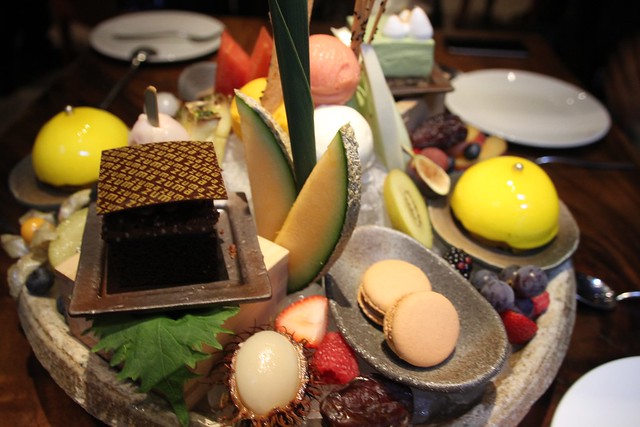 To list every element is to attempt the impossible, but we know it included three kinds of freshly made sorbet at its peak; a light, green tea cheesecake; a shining bright yellow custard; light and crisp macaroons; a semi-sweet chocolate cake with a firm ganache; and assorted fresh fruits like blueberries and lychee that filled all the crevices on top of the heavy bowl of ice that carried the sweet feast. 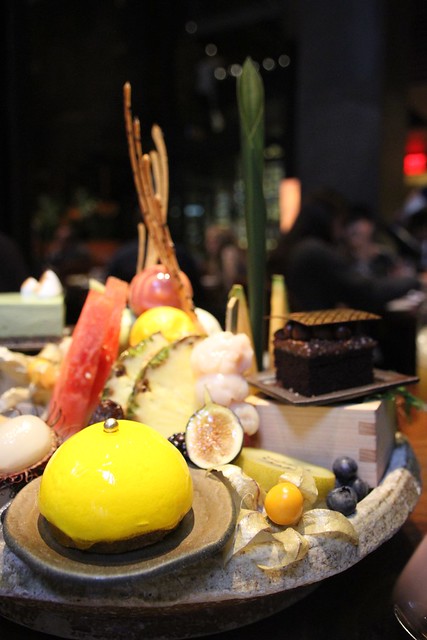 The Bitches say: B+; amazing, but exclusive. Save it for a special occasion, and then wear your best. (And bring your appetite.)