Young American Bar needs to change its name — to “Yum American!” Cheesy jokes aside, this new Logan Square restaurant has garnered buzz for its Instagrammable goth bread and CBD cocktails. This weekend, the restaurant launched a brunch menu, and I decided to check it out with my coworkers Anna-Lisa and Sheyda. 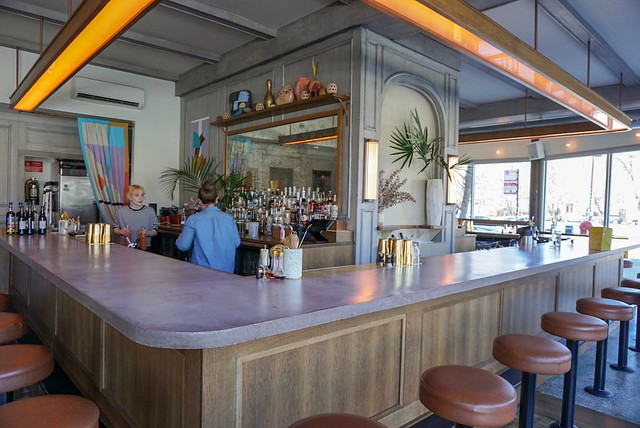 The decor is trendy-chic with neon, a gorgeous bar, and beautifully designed graphic menu. One corner of the restaurant has benches where you can casually lounge and nibble with friends, or you can get a seat at a table or the bar for a more traditional dining experience. 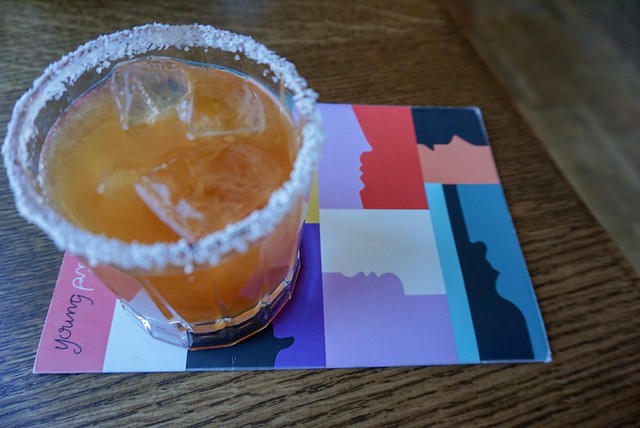 While the restaurant is known for their CBD cocktails, we decided to stick to alcohol. To get started, Anna-Lisa selected the “greeña colada,” a frothy concoction of Jamaican rum, matcha, blanc vermouth, and pineapple coconut whipped cream. She was a big fan! I ordered the “love lost” on the advice of beverage director Julia McKinley. The drink blends Spanish and Italian vermouth, grapefruit, gin, amaro, and lime with a salt rim. It was tart and tasty, and the salt rim was an elevated touch that balanced the cocktail. The restaurant comped our drinks, their treat! 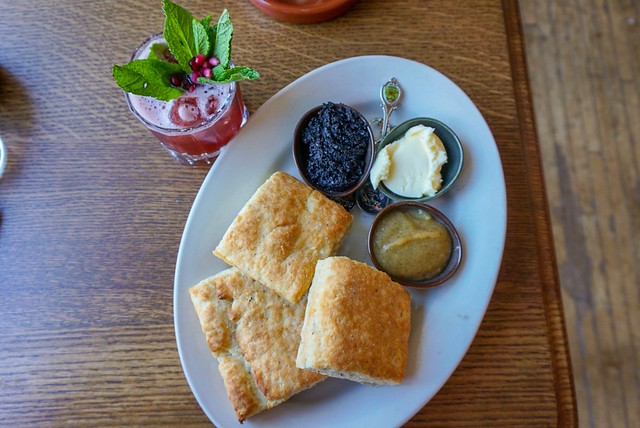 McKinley also recommended the biscuits, and  – as a fellow North Carolinian – her recommendation carries extra weight. The biscuits were everything you could hope for, fluffy and moist, served with butter, apple butter, and a veggie spread.

While enjoying the biscuits, Anna-Lisa and I decided to sample some more of the cocktails – for “research purposes.” For round two, we went with the “creature of love,” a pretty pink drink of port, Amontillado, sherry, bourbon, and tart cherry. We paired that with the “walk it down,” which is a sour/sweet combination of sherry, mezcal, kiwi, alpine liqueur, lime and absinthe. The second round of cocktails were as tasty as the first! 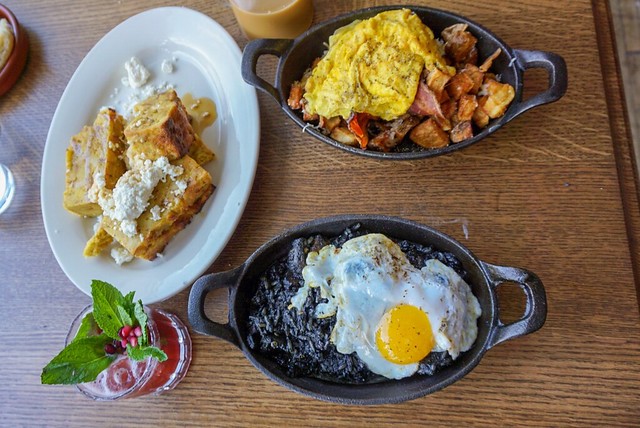 To eat, the three of us decided to split the baked French toast, nighttime sisig, and  a dish called the “old American.” The French toast was a dense, moist bread with housemade ricotta and maple syrup. The consistency is heavier than most French toasts I’ve tried, but different is not a bad thing in this case. It’s a decadent dish that will have you mopping up the leftover syrup. 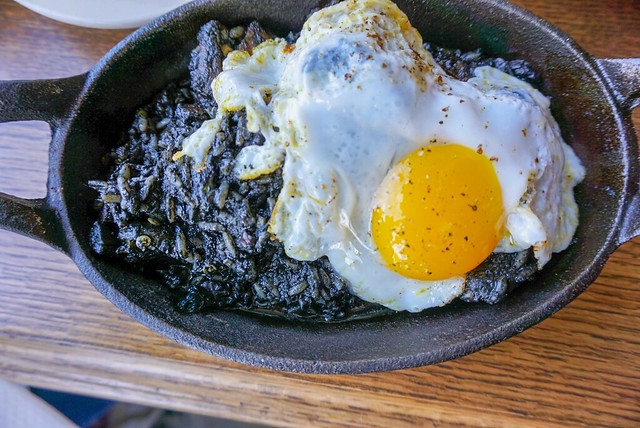 The nighttime sisig was by far my favorite. We ordered it in a skillet instead of burrito to make sharing easier. It has porky bits, poblano, rice, a duck egg, and squid ink that turns the dish an intriguing shade of black (squid ink can also be found in Young American’s goth bread and midnight Bloody Mary). I devoured this dish, which was spicy and savory, and fought to take the leftovers home to snack on later! 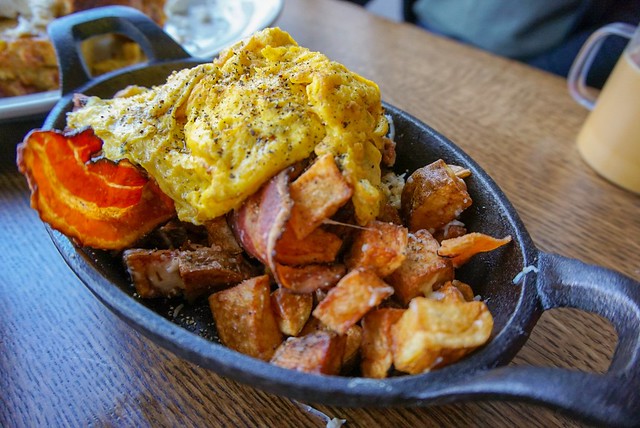 The old American was another skillet dish and a classic meal of bacon, taters, cheese, and egg. It rounded out our meal nicely, but if you’re not sampling and sharing with friends, I would stick to the more exciting options on the menu.