My husband loves running errands for the women in my family. Whether it’s making a pit stop en route from work to grab us wine or trekking to the corner store to pick up some last minute ingredients for whatever dinner concoction we have our minds set on making, Chris just loves his Kersey girls.

Please note my sarcasm, as none of that is true; he absolutely detests when we make him dart to the store for something as mundane as parsley. Nonetheless, Chris loves me and my crazy family, so on a gorgeous Sunday he couldn’t pass on the opportunity to cart my sister and me to brunch. 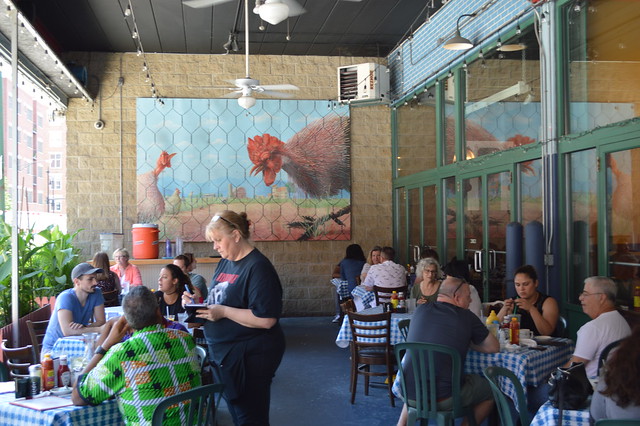 We picked my sister up from her boyfriend’s house and settled on heading to the West Loop for brunch. We wanted to check out Wishbone, a well-known Southern restaurant that just celebrated its 25th anniversary in July. We were starving and excited to grub down on home-cooking Southern fare.

Wishbone is a really big restaurant with a large outdoor patio. Thankfully, the overhead awning provided shade, so we decided to eat outside. The patio was bustling with diners, and we were happy to be seated without a wait.

Since most of our family gatherings involve booze of some sort, it was only appropriate that the three of us order some brunch libations. Chris ordered a beer, while Ashley and I decided to go with cocktails; a mimosa for her, and a Front Porch Tea for me. 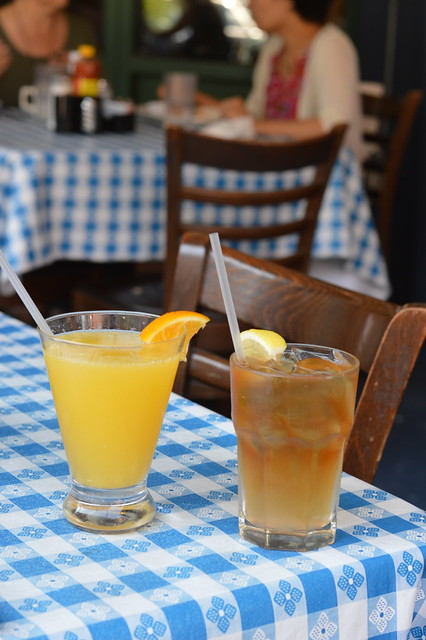 Ashley loved her mimosa, but my cocktail was so-so. I had been hoping for a strong peach flavor, but instead what I got was a watered down iced tea, with very little evidence of booze being present. On my second round, I decided to stick with a mimosa. 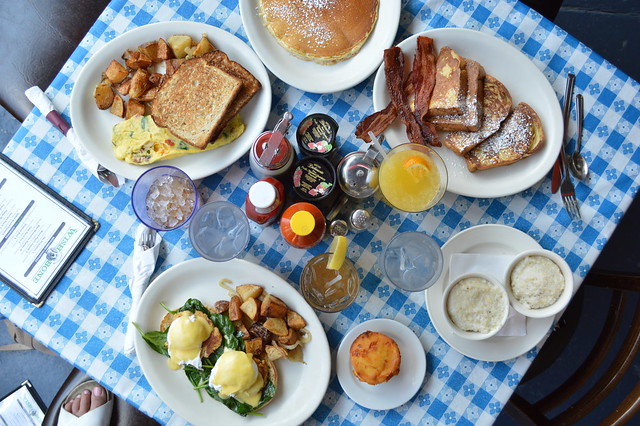 We were all hungry, and are pretty familiar with our go-tos at a Southern restaurant. Chris went for the fresh spinach omelet and Ashley went for her brunch favorite, French toast. Not one to resist crab on a menu, I decided to go with the crab cake eggs Benedict. 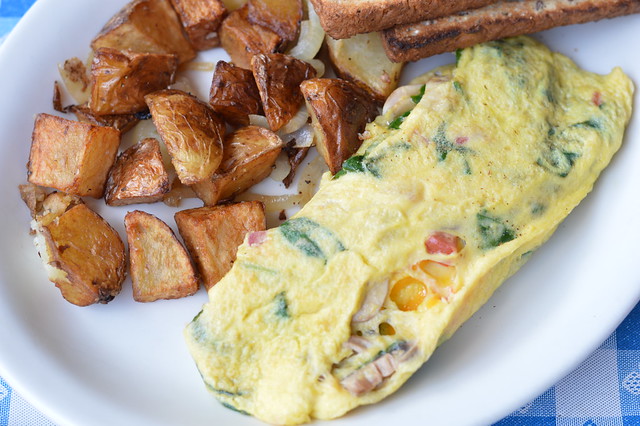 Chris enjoyed his omelet. It was filled with spinach and tomatoes, in addition to mushrooms. Plus, he added cheddar cheese to it. It was served with a side of toast and breakfast potatoes, which is always pleasing for him. 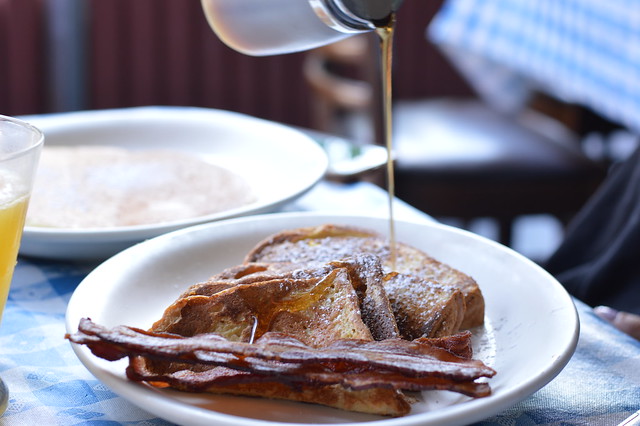 Ashley’s French toast was good, but nothing spectacular, she noted. Made with “thick-sliced” Challah bread, she was underwhelmed with how thin the French toast actually was. Challah bread is normally thick and quite flaky, but Ashley said it tasted just like regular bread. It was good, regardless. 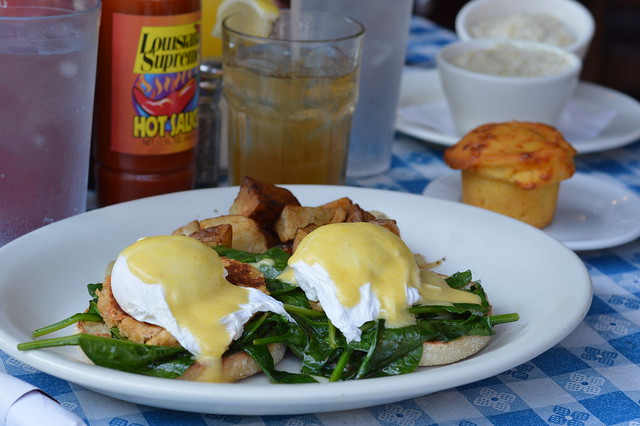 My crab cakes eggs Benedict, on the other hand, was not a likeable dish. For starters, my eggs and Hollandaise sauce were barely lukewarm, at best. The sauce was runny and too lemony; the egg was barely cooked.

While the crab cake was nowhere near an amazing crab cake that could do this Maryland girl justice, it wasn’t terrible. I picked away at it while I waited for our server to come back to the table.

After about seven minutes since our food had been delivered to the table, our server came to check in on us. I told her I wasn’t a fan of the eggs and Hollandaise sauce, and I asked if it would be possible to get a side of scrambled eggs instead. After rolling her eyes at me, she obliged, and about ten minutes later, after Chris and Ashley had finished their dishes, my eggs arrived to the table. 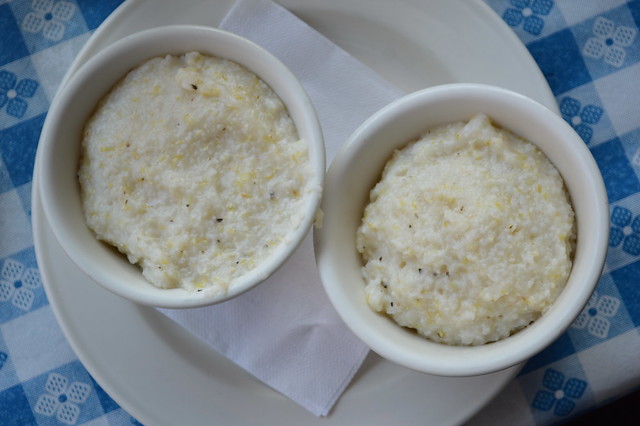 I also ordered a side of grits, which were delicious, but grits are merely a sponge for salt and butter, and it is hardly an achievement to get them right. The cornbread that I ordered on the side was pleasing. 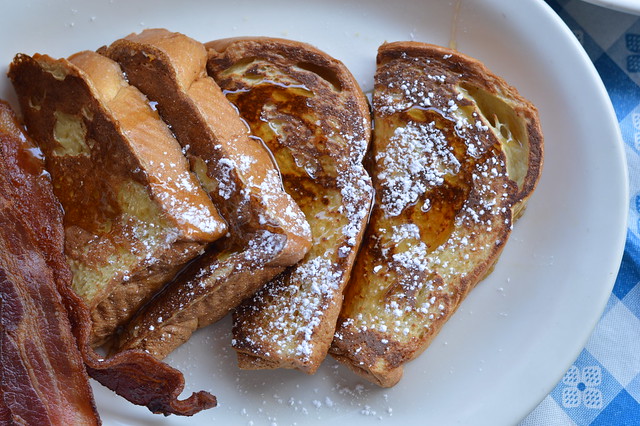 Wishbone is fun and relaxed; it is an ideal spot to take a group or have a big family brunch. With its casual picnic-style decor, servers wearing funky tee shirts, and a huge mural of chickens on the patio wall, it definitely exudes a Southern comfort vibe.

The food was average, at best, and the cocktails were underwhelming, but the charm of this restaurant will have us return again should the opportunity present itself. It is the kind of place my dad would have loved; somewhere to sit and enjoy refills of sweet iced tea for hours after eating casual, Southern fare.

Be warned though, the service is about as relaxed as the decor. Truly the only front-of-house staff that seemed to actually be working were the bussers. They did a fantastic job clearing plates and refilling waters fast, and grabbing ketchup or condiments when the server was nowhere in site.

The Bitches Say: C. Come to Wishbone for a relaxed vibe and casual Southern fare, but don’t expect much more than just that.

Wishbone serves Breakfast daily, and weekend brunch on Saturdays and Sundays from 8 a.m. until 3 p.m.