One of my favorite late-night options is Velvet Taco in the Gold Coast. This Texas chain differentiates itself from “street” tacos by elevating the dishes with unique variations and twists on classics. At night, the restaurant is lively and packed – sometimes with a line out the door. But the two-story restaurant is counter service, so even when busy, the line moves fast and tables turn quickly. 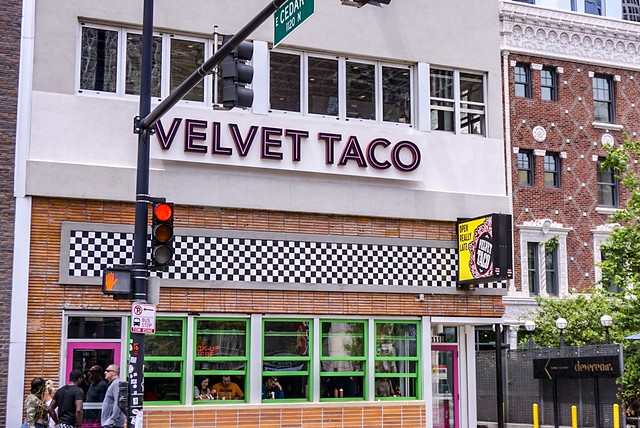 I had noticed brunch tacos on my last visit and was excited to see how this late-night staple performed in the light of day. My boyfriend Cam and I decided to put it to the test. 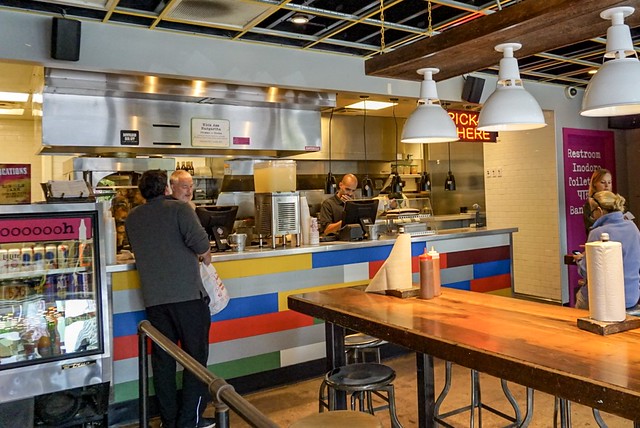 On a Saturday at 11 a.m., there was a decent crowd of brunch-goers and families, but it was not packed and it was easy to get a seat. Smaller parties will have luck sitting at the window bars.

We decided to get drinks to accompany the meal, and sipped those at by the open windows on the first level while waiting for our food to be ready. Cam got a Bell’s Two Hearted Ale, one of his favorites. While visiting at night, I typically order a frozen margarita, but in the spirit of brunch, I decided to try the mimosa. 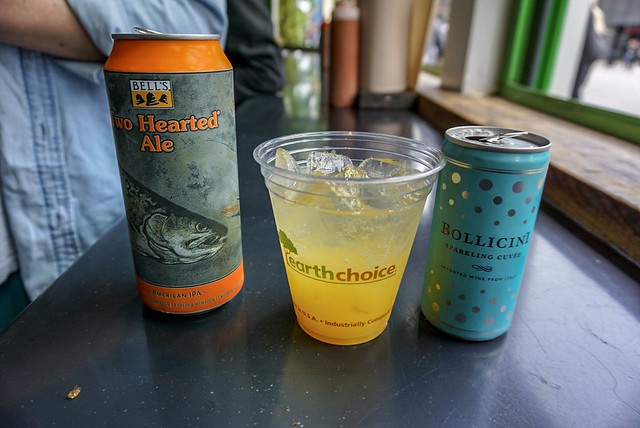 I was handed half a glass of orange juice and a small can of sparkling wine–a DIY mimosa. While I usually appreciate a good DIY, this mimosa was very acidic and not what I was looking for. If you’re looking to drink, go with a beer or the frozen margarita, and leave the cans of wine behind. 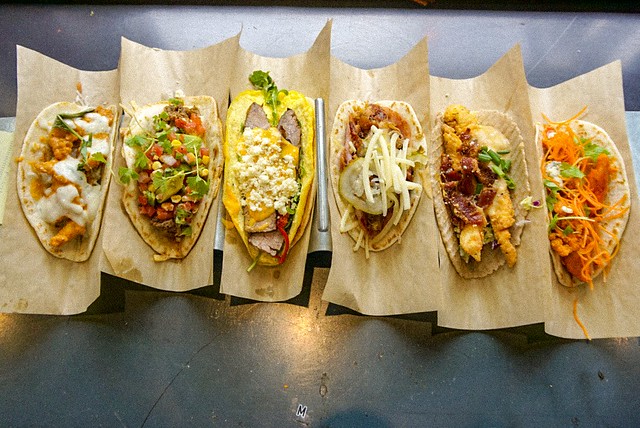 When our name was called, I went to the counter to pick up the six tacos. Velvet Taco makes it easy to carry the food back to your table with their trays that prevent the tacos from falling over. 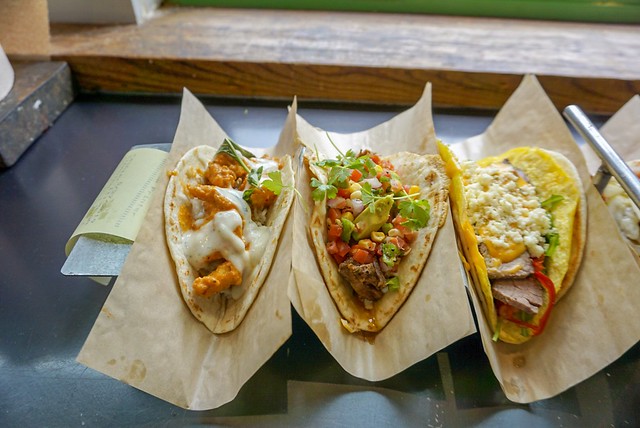 Cam ordered the spicy tikka chicken, steak and eggs, and slow-roasted brisket tacos. The chicken won out as favorite, even though it’s not a traditional taco choice. It comes with crisp tenders, spicy tikka sauce, cilantro rice, crema, and Thai basil. This brisket taco was a more typical taco, but equally delish. But we were both surprised when the steak and egg taco fell flat. It had potatoes, sambal hollandaise, arugula, tomato, pickled fresnos, queso fresco, with an egg tortilla inside of a flour tortilla. But it was dry and uninspired. After the first two tacos, it was a disappointment. 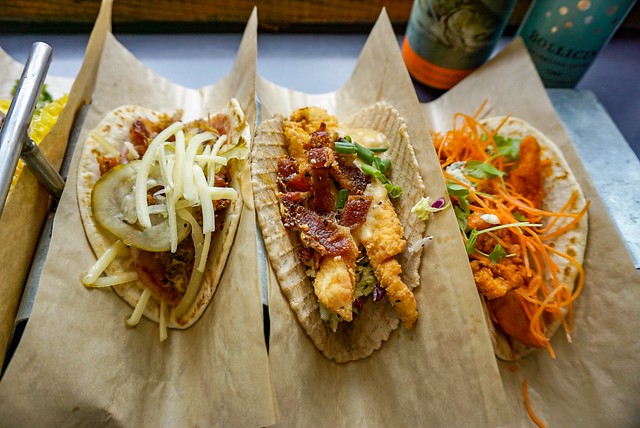 I got the buffalo chicken, chicken and waffle, and Cuban pig tacos. The buffalo chicken taco has carrots, chicken tenders, buffalo sauce, Danish bleu cheese, and ranch crema, stuffed into a flour tortilla and garnished with small slices of celery. It is crisp, spicy, and delicious. It is by far my favorite taco that Velvet Taco makes.

After polishing off the buffalo chicken, I moved to the Cuban Pig. This one has Gruyère cheese, slow-roasted pulled pork, honey ham, bacon, mustard, and pickles. While an exciting, elevated taco, I will stick to Cuban sandwiches in the future. Bread is a better vessel for these savory flavors than a small flour tortilla, and I was left wanting more. 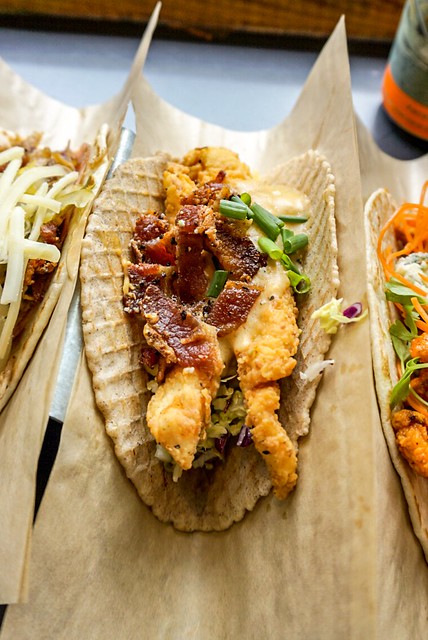 I saved the chicken and waffle taco for last. I love breakfast tacos, and I love chicken and waffles. This brunch taco is served all day and comes with fried chicken tenders, bacon, gravy, green apple slaw, maple syrup, and red chili aioli all carefully plated on a waffle tortilla. Unfortunately, the tortilla was dry and overwhelmed the ingredients. Ultimately, I left only happy with one of my tacos, and the realization that some places are meant for late night and some for brunch. And that’s okay! I will be back at night, eating tacos until the end of time.

Velvet Taco is a terrific dinner or late-night spot, but the breakfast choices fall flat compared to the other tacos and drinks.