The best place to be on a cold, dreary New York winter day is inside a cheerful, Australian all-day café, where the bright colors, quality coffee and cocktails, and friendly, accented wait staff will brighten any mood. 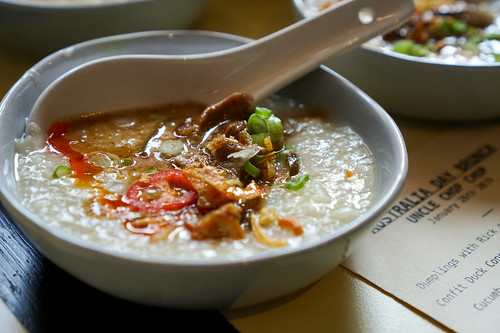 I was missing Australia something awful, having just returned from three weeks in Melbourne to New York in January, the never-ending month of bitter cold, brutal deadlines, and zero sunshine. The best cure? Head to Uncle Chop Chop, an Australian-owned restaurant serving up inventive, unique Southeast Asian fare in a bright, cheerful space. The occasion? Australia Day, the country’s independence day, celebrated with much debauchery and fanfare during their summer vacation.

Uncle Chop Chop is a small, all-day café with a sky blue, navy, and white color palette. The vibe is playfully pulled together — a picturesque place without the pretense. There’s a gorgeous bar with technicolor patterned gold stools where you’ll enjoy delightful craft cocktails. To the back lies the small, open kitchen where the chefs are making some to-die-for Asian cuisine. 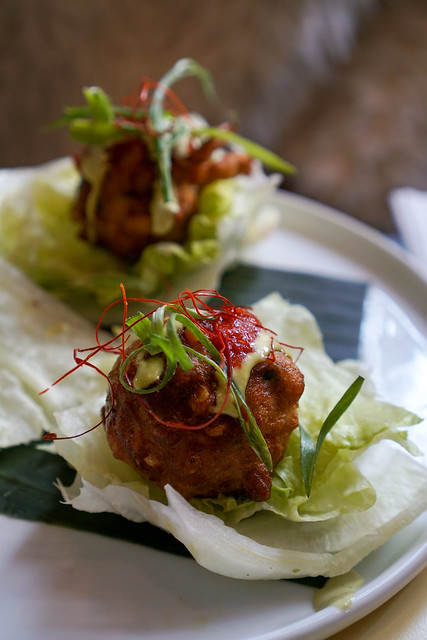 Despite the cheerful vibes, the restaurant is actually named for Chopper, a famed Australian mobster who hacked his victims to bits. Tattooed and dark eyed, he looks down upon the diners from his picture framed on the wall at corner of the bar.

Australia Day lunch was a preview of Uncle Chop Chop’s forthcoming brunch service, which will launch in February. If the brunch cocktails are any indication, we’re in for a treat. The spiked Vietnamese coffee was the perfect concoction for a sunny Saturday afternoon. It was equal parts strong and sweet. 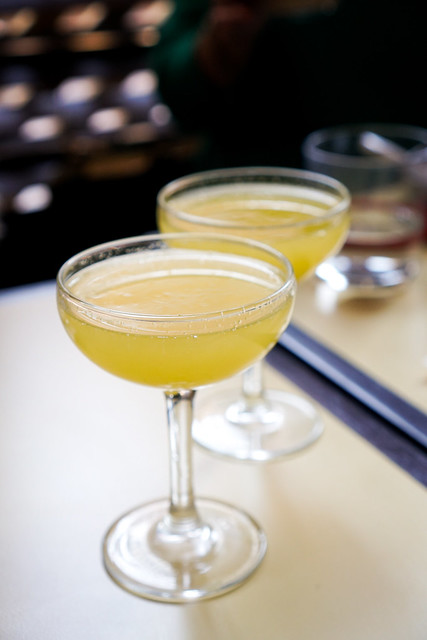 Rather than a traditional mimosa, the Crying Tiger Bellini offered a touch of turmeric, for health and for spice. Rounding out the cocktail menu, Uncle Chop Chop also offers a Tom Yum Bloody Mary and a Far Eastside.

We’re crazy for dumplings, and have yet to find a better offering than Chop Chop’s dumplings, served soaking in a Rick and Morty-esque Szechuan sauce. Between the cocktails and the dumplings, we were off to a strong start. 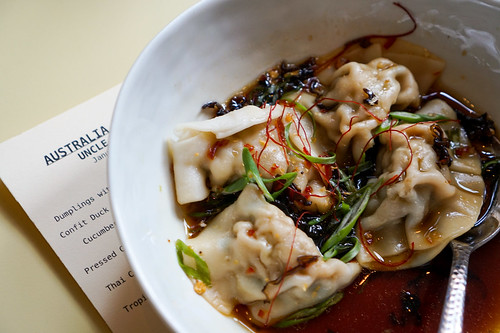 We sampled the duck confit congee, which despite being dressed with shallots and scallions lacked flavor, but then again it is congee. The cucumber salad was intriguing, topped with dried, diced prawns and served with a light, spicy, and clean chili dressing. 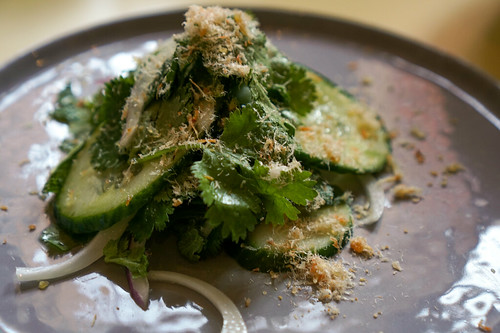 Meanwhile, the restaurant, which had prepared a prix fixe menu for Australia Day brunch, was happy to quickly accommodate our resident vegetarian, Shruti, upon learning of her dietary restrictions.  They prepared crispy corn and squash fritters served with tomato jam and nestled on a bed of lettuce . The fritters were creamy on the inside and oh so delicious.

They also brought out a generous portion of Brussels sprouts which were appreciated by all. Shruti also loved the tropical fruit medley with a toasted coconut dressing. 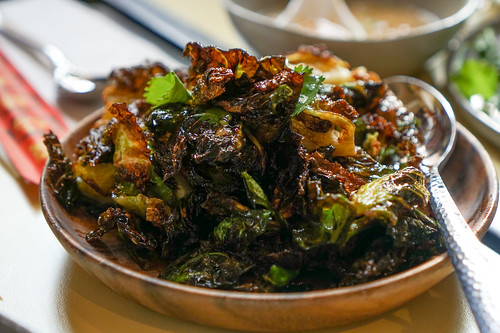 Last but not least, it’s hard not to love a Thai curry meat pie. This gorgeous, flaky pastry looks like a pot pie, but inside was filled with creamy, coconut milk curried chicken, and served with a chili raita. I’m not much for pot pies — but I love Thai food, and the combination of the flaky, buttery pastry with curry chicken is hard to beat. Don’t sleep on this cozy comfort food. 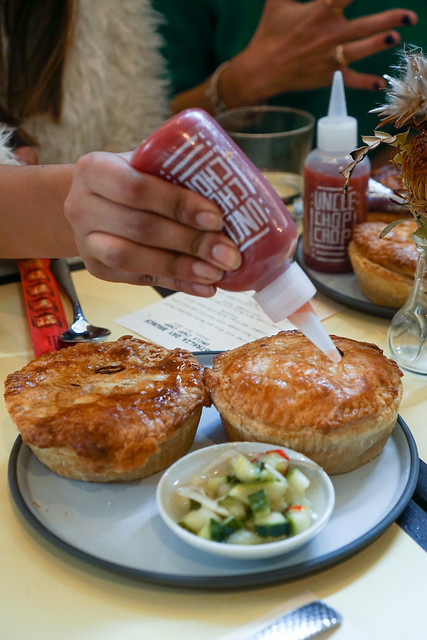 For the record, Uncle Chop Chop will be launching its brunch officially in February, without a prix fixe menu, and with vegetarian options and some sweet brunch items like French toast.

The Bitches say: five Champagne flutes. While this isn’t the official brunch, we were intrigued by the delicious, Southeast Asian offerings and the incredible brunch cocktails in the charming space. We can’t wait to go back for the real deal!