Dating a Bitches Who Brunch writer means my boyfriend, Cam, ends up spending a lot of his free time at brunches. Which, “oh no!” bottomless mimosas and fluffy pancakes every weekend. The torture! The sacrifice! But, ultimately Cam prefers beer.

So I’ve decided to dive into the world of brewery brunches. Recently, we headed to Twisted Hippo, an Albany Park brewpub that opened in early 2019. 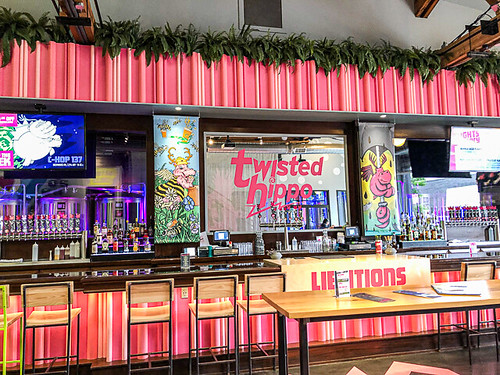 Something that originally piqued my interest was Twisted Hippo’s inclusive pricing. What you see on the menu is what you pay, and Twisted Hippo pays their staff a living wage with health insurance instead of relying solely on tips. While the menu prices can seem a little steep (like $18 for a brunch burger), when you realize the tip is included, it is standard pricing.

Cam and I went on a Sunday morning, hoping to fill up before settling in for a long day of fall football (a fair post-brunch compromise). The taproom is fun and funky with neon green and bright pink accents. Upstairs, there are games and art, making it easy to turn brunch into a day-long activity.

We seated ourselves near the open garage door, able to enjoy some fresh air while staying out of the rain. There were a few families and groups of friends in the restaurant, but it was relatively quiet. 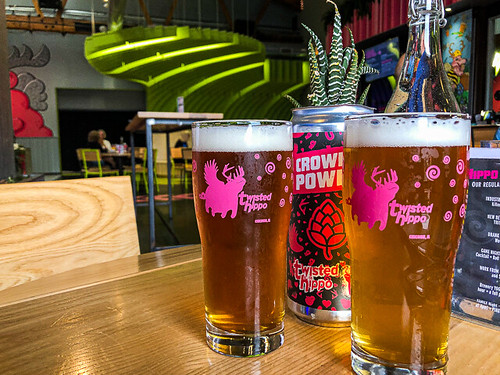 While Twisted Hippo does offer brunch cocktails, including a 10 oz. mimosa, not getting a beer seemed silly after making the trip to a brewery. Cam ordered the Lady Ella, a single malt and single hop beer that was crisp and had notes of grapefruit. I got Head of the Glass, a session IPA that has tropical and stone-fruit flavors and only a 4.6 percent ABV, which is light for an IPA. Both beers were delicious, and I adored the Twisted Hippo pint glasses, emblazoned with the bubblegum pink hippo with antlers and wings logo. 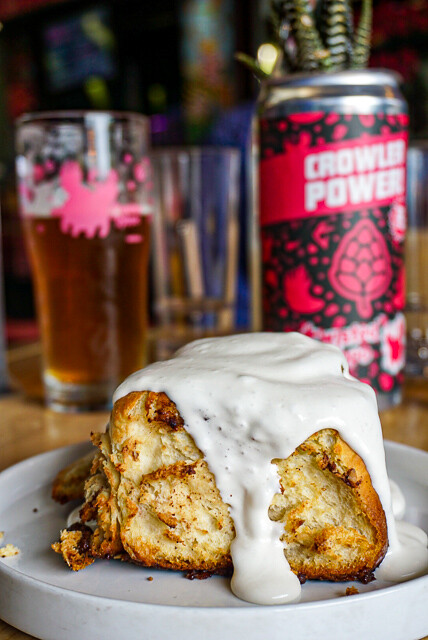 One of my favorite things of late is to order dessert first. I always fill up during the meal and then either don’t want dessert or don’t enjoy it as much as I should. So Cam and I decided to split the cinnamon roll as our appetizer. I’m glad we decided to share, because the roll is behemoth. It came drenched in icing, but the outer layers were a little dry. I peeled back the biscuit-y part and dove into the gooey center. My sweet tooth was definitely satisfied. 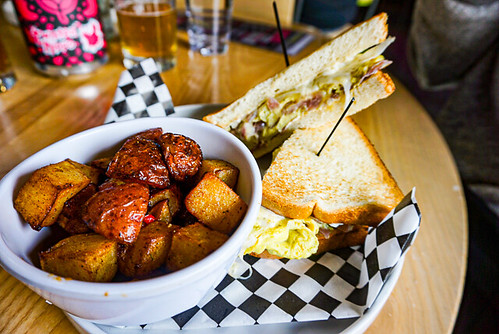 While the bun was big, we were still hungry hippos. Cam ordered the sausage and egg sandwich with a side of potatoes as his main dish. The menu describes this sandwich as scrambled egg, sautéed peppers and onions, and provolone cheese on a toasted ciabatta roll with light mayonnaise. Cam’s sandwich came out on basic white bread. Luckily, the interior still packed a punch of flavor, elevating this from school-lunch status to a brunch-worthy. 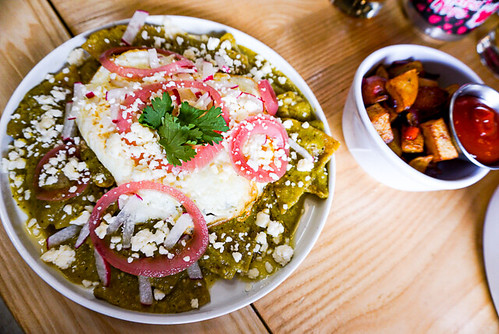 I ordered the brunch special: a plate of chilaquiles. They also came with a side of potatoes, though my serving size was big enough I didn’t need the side. The tortilla chips were covered in salsa verde, pulled pork, pickled onions, finely diced radishes, sour cream, and two eggs over easy. It was flavorful and filling. While it is only a special right now, it deserves a permanent home on the menu. 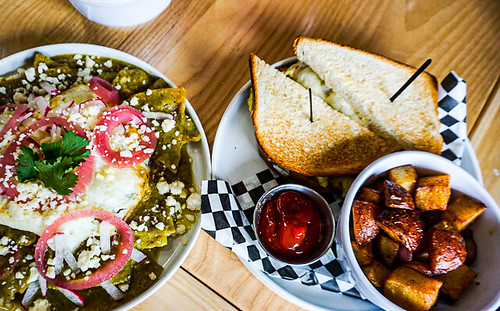 After ordering, we unfortunately never saw our server again. So when it was time to call the Uber home, we had to hunt down another waitress in order to close out. Minus this snafu, the staff was incredibly friendly and attentive.

I’d post up here during a stir-crazy snowy Saturday, but the brunch bites need to catch up to the delicious beers. Until then, visit for a happy hour instead of brunch.