Rarely do my and Cori Sue’s schedules sync up. In the event that they do, we brunch and shop, which was the case last Saturday.

After our respective morning workouts, Cori Sue swooped me up in an Uber, as car-less city girls do, so we could head to our favorite suburban oasis, Mosaic.

We arrived at True Food Kitchen to a line that was snaking out the door, proof that vegan, vegetarian, and gluten-free food can be delicious! Luckily, we weaved through the crowd and quickly snagged two seats at the bar.

If you’re into eco-chic decor, tasty, and healthy dishes, then True Food Kitchen is the place for you. The entire menu adheres to the principles of Dr. Weil’s anti-inflammatory pyramid, which looks a lot different than the one hanging in the nurse’s office when we were in elementary school.

Since we already worked out that morning, and I was trying, but failing, to fight off a cold, we elected to begin our meal with two healthy, booze-free drinks. Cori Sue ordered the Tropi-Kale smoothie, which was a blend of kale, coconut milk, pineapple, ginger, and honey. In my seal voice, I ordered the Medicine Man because it had “antioxidant” written in the description several times. 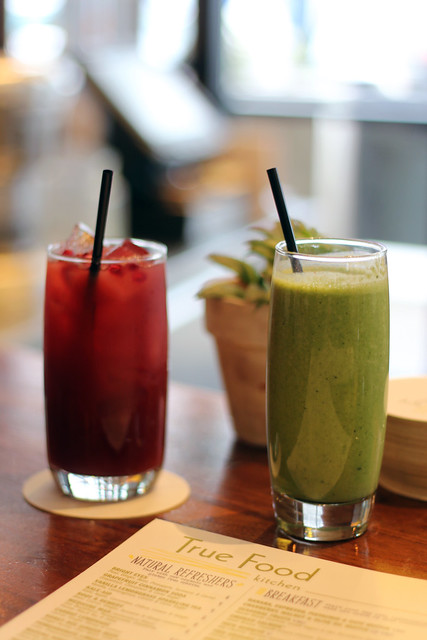 Cori Sue prefers green smoothies to green juices, as they are sweeter and heartier; and this smoothie was no exception. It was delicious, and she appreciated being able to get her greens in beverage form.

Between working out at solidcore and SculptDC yoga, respectively, and a 30-minute cab ride to Mosaic, we were starving and thus started with several appetizers: the kale and avocado dip, the gluten-free cranberry, walnut, and olive oil muffin, and the wild-caught albacore tataki to address our insatiable craving for ahi tuna.

I’m in love with the kale and avocado dip, and in retrospect, didn’t really give Cori Sue a fair chance at partaking in the dish. The pseudo-guacamole dip is made with pink grapefruit, kale, cojita cheese, and roasted poblano. I’ve tried to recreate this dish at home and failed, and so here we are. It was just as good as I remembered. 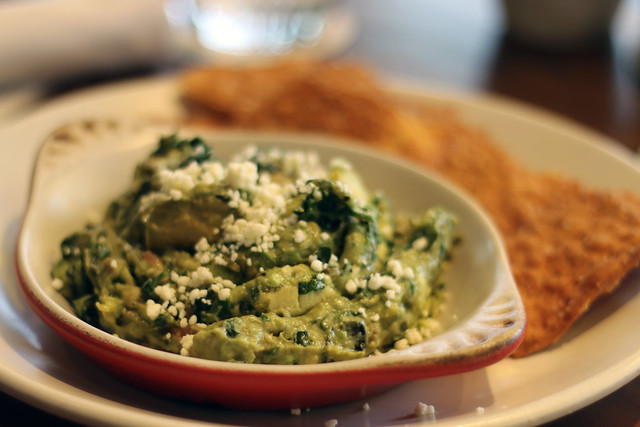 The fresh tuna is served with avocado, cucumber, radish, and scallion. You snag the pieces of raw fish and avocado with chop sticks. While Bitches tend to love ahi tuna, this particular dish was well-prepared, fresh, and flavorful, and the first appetizer to go. 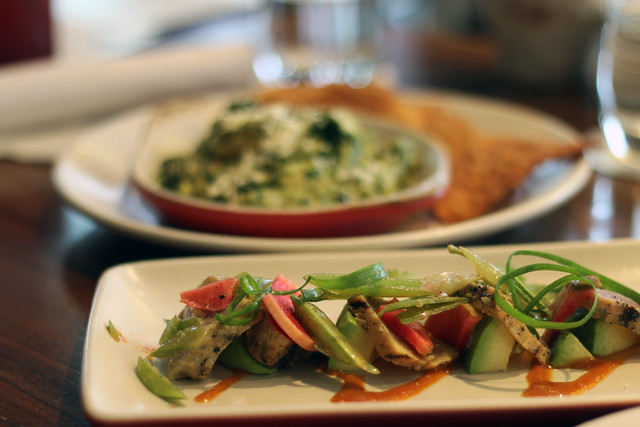 Cori Sue was adamant about ordering the cranberry olive oil muffin, as she rarely eats pastries nowadays. I was pleasantly surprised by the muffin, as you never know how a gluten-free pastry is going to taste. I think the olive oil helped keep it moist, but I have no idea how they got it that fluffy. 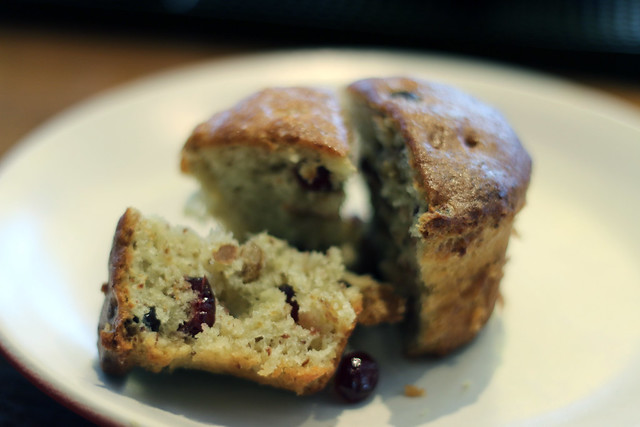 In between Snapchatting, real chatting, and Instagramming, we ordered entrees. Cori Sue went with her usual order of two organic eggs, which came with a side of chicken sausage and sweet potato hash. The eggs were cooked well, and the chicken sausage was delicious and sweet. Per usual, the hash was just OK. 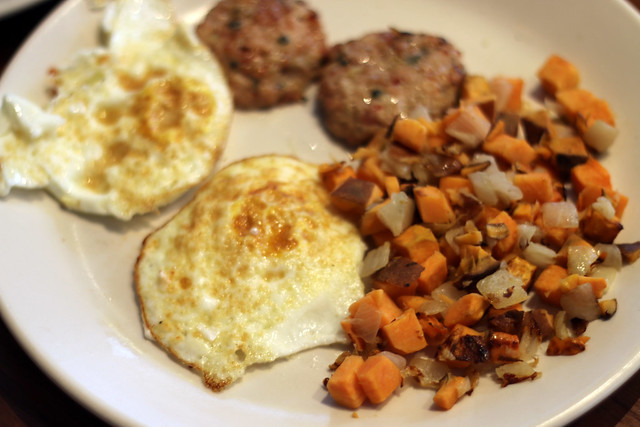 After a recommendation from our waiter, I went with the smoked salmon breakfast pizza, with gluten-free crust. The eggs were cooked into the pizza, which I appreciated, as there was no room to be messy on our little bar stools. The crust was thin and crispy, and the salmon was fresh. However, I could have survived with less of the Tzatziki cream sauce. 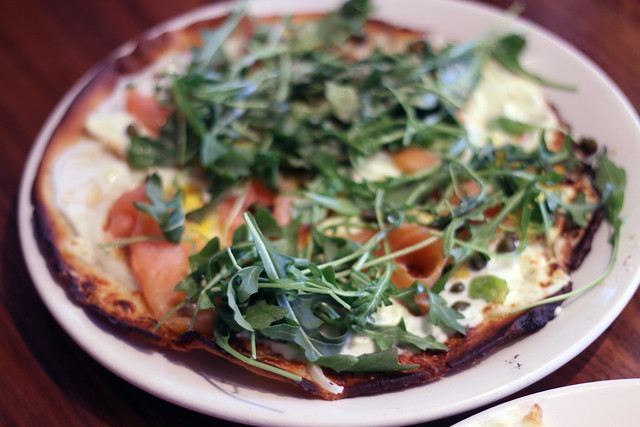 We rounded out our meal with two black coffees and the gluten-free, flourless chocolate cake, with two scoops of ice cream: dairy vanilla and dairy-free Maple coconut ice cream. Cori Sue insisted on sharing this dessert, and I wasn’t mad—it was addicting. The moist, chocolate cake had a molten chocolate center and paired well with both ice creams. It’s still one of our favorite desserts—healthy or not. 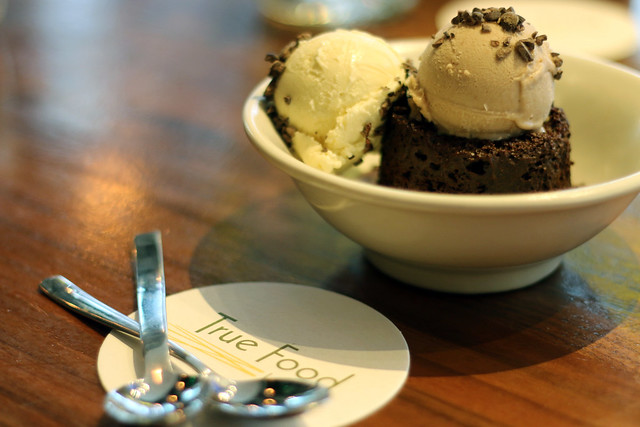 We hit up a few shops in Mosaic, namely, the essentials: Target and Lululemon. This being January, we are on a bit of a fitness kick, it’s true. With our matching Jawbones on our wrists, we worked out, Ubered, enjoyed a healthy brunch, and hit up Targét boutique and Lululemon for cute fitness wear. (Since CS works at a coffee shop, this counts as workwear!)

Since that wasn’t enough, we jumped into an Uber to head to Tyson’s Corner, so we could check out Chelsea Collective, a women’s fitness boutique that fuses fashion and fitness (Read: athleisure heaven). We then proceeded to get lost in the retail maze that is Tyson’s, while attempting to order our final Uber back to the city, as city girls do.

The Bitches say: A. It’s hard to believe the memorable and satisfying dishes are healthy, and often times Paleo or gluten-free. We’ll always make up an excuse to head to the ‘burbs for this one.