For the first time ever, I walked into brunch in Manhattan and felt like I stepped right into a kid’s birthday party at Chuck E. Cheese’s. I was meeting Becca and Giselle for brunch at Treadwell Park’s new location in Battery Park City (read our review of the UES location here).

Coming from a not-so-family-friendly neighborhood (East Village) down to the land of yoga pants and strollers was a bit of a culture shock; but the spanning umbrellas and long outdoor picnic tables made up for it.

Always a fan of the al fresco brunch scene in New York, I was excited to see what Treadwell Park’s patio had in store. That is, after we fought our way past the ping pong tables, popcorn machine, and arcade games, all surrounded by—literally—a baseball team of screaming children. 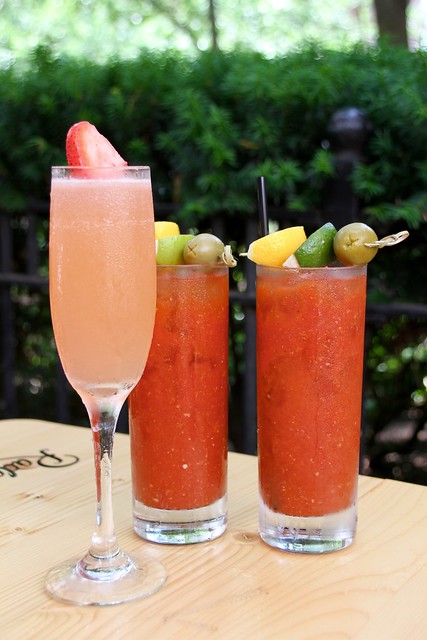 After noticing our patio table was surrounded by sun-flushed babies in high chairs, one train of thought became top of mind: cocktails. While Becca and Giselle went for the classic Bloody Mary, I decided to venture and ordered a concoction deemed “Don’t Judge.”

The name was fitting to the mixed alcohols in the flute (Vodka, St. Germain and bubbly), but this fruity libation struck me as incredibly tame. Becca and Giselle were satisfied with their cold, spicy Marys.

When you spot Bacon lollies on the brunch menu, you order Bacon lollies. Simple fact; am I right? The strange discovery was that these weren’t lollies at all. Instead, three wilted strips of dense, candy-coated bacon flopped out of a jam jar. 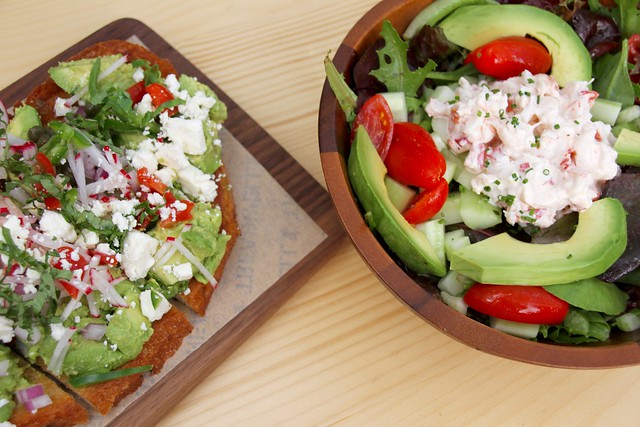 We were disappointed; expecting bacon-wrapped-bacon pops on sticks. If you’re going to claim a delectable bacon lolly, at least do it right.

One starter that was very right was the avocado on sourdough toast. Not your typical multigrain, gluten free, vegan, girly treat, Treadwell Park’s version was served on a buttery slab of sourdough Texas toast. And perched atop the greasy goodness? An incredibly fresh medley of chunky avocado, crumbled feta and colorful tomatoes, capers, basil, radishes and jalapeño.

Next it was on to the other colorful dish sweeping our spread, the freshly cracked Maine lobster salad. Is it just me, or does “freshly cracked” insinuate fresh? Expecting huge chunks of lobster atop the bed of greens may have just been a fantasy of mine, because this mayonnaise-and-vinegar-based lobster salad was worthy of the prepared foods section at Whole Foods. 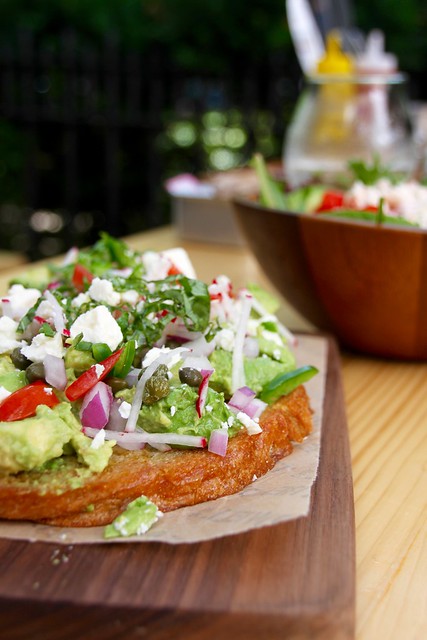 Don’t get me wrong, this dish was delicious and refreshing, but my champagne taste buds begged for more lobster.

When it comes to entrees, I’m a sucker for anything wrapped in a corn tortilla. The pulled pork tacos were no exception. Three big tacos arrived, but being a lady with Southern roots, I was begging for just a tad bit more of juicy bite to quench my craving. Other than that, the tomatillo and topping sent me smiling.

Giselle is never one to pass up on brisket, so she opted for the house smoked beef brisket and fried eggs, which came with a side of spinach, caramelized onions, and home fries. 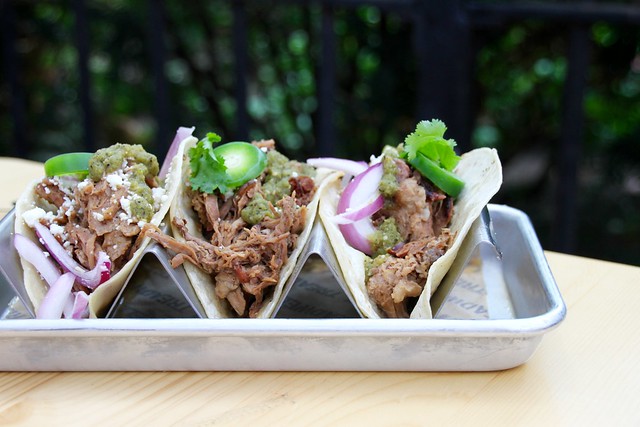 After the round of flavorful appetizers, Giselle was slightly disappointed by the bland dish she received. The barbecue sauce that was supposed to come on the dish would have helped make it more interesting, but unfortunately, it was left off.

If only the Kraft-cheese-slice-sized square of parchment paper hiding under the eggs (nicely fried, to be honest) had been left off too … The menu definitely said “cheddar,” not paper. Needless to say, that dish went straight back to the kitchen. 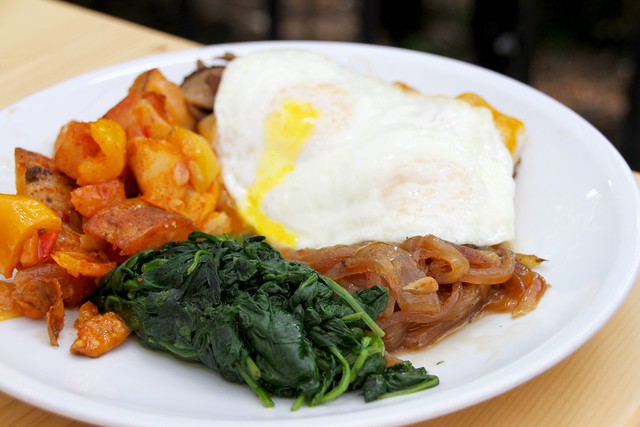 Becca tried to keep it healthy after her morning run by ordering the quinoa salad, a mix of greens, avocado, and parmesan on curried quinoa, topped with a poached egg. The egg was perfectly cooked, but the quinoa still warm, which warmed the entire dish, greens included, which she found a bit unappetizing.

You must order the giant soft pretzel with Liptauer cheese, if anything, just for the novelty of having a quintessential beer-hall dish bigger than your head. Served on a pizza tray, this fluffy contortion of salty goodness will satisfy just about any craving. 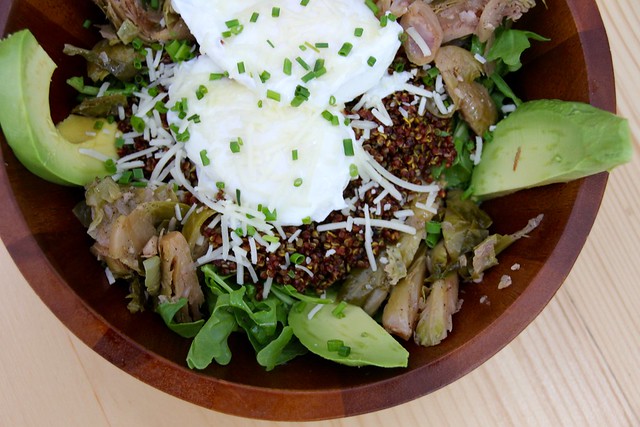 Throw a little Pimento cheese and Dijon on the side, and it’s the perfect conclusion to your meal. Besides, you may need to soak up some of those brunch cocktails before running off to an unexpected shopping spree at Brookfield Place next door.

The Bitches Say: Three flutes. If you’re looking for a kid-friendly, no-frills spot to bring your young nieces and nephews after touring the downtown Memorial, Treadwell Park is your spot. 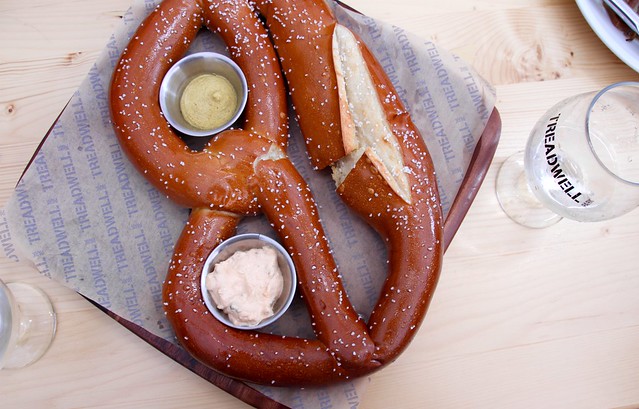 One thought on “Treadwell Park Brunch”