HBIC Cori Sue and I recently visited Houston, Texas for a girls’ weekend and couldn’t pass up testing the brunch offerings in the area (obvs). We’d heard good things about Tiny Boxwoods and were invited in to try the gorgeous restaurant during our trip.

This stunning indoor-outdoor space will remain on our list of best brunches ever, which means a lot coming from a Bitch! It’s easy to see that Tiny Boxwoods was the conception of an event-planning duo—it’s utterly pristine. You enter a large outdoor courtyard trimmed by walls of topiaries. To your right lies a restaurant with a stunning outdoor patio and even more seating in the side terrace. To your left lies Thompson + Hanson, an expansive outdoor nursery (and enough terra cotta plants to make a gardener go wild) and further back a pristine boutique of housewares, gifts and resortwear. 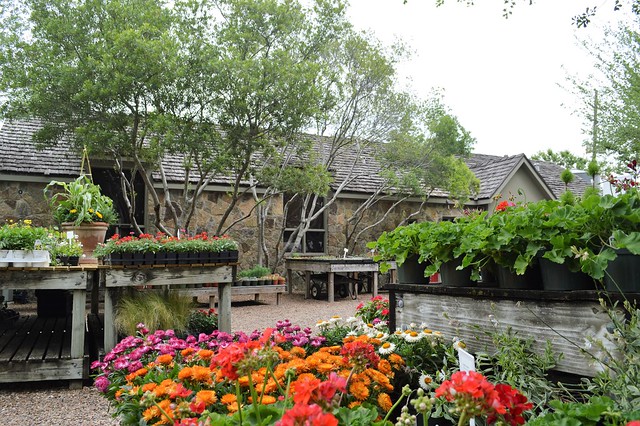 The wait is long—go early—but there’s a charming mixologist serving up mimosas, sangria, and white wine mojitos while you wait. We ordered cocktails from the charming, shaggy-haired 20-something and his adorable cocktail bar. Cori Sue’s mimosa was lovely but my white wine mojito was spectacular and gave her serious order envy. With our enormous cocktails in hand, we joined the line that had formed outside the restaurant. By the time we were finished with brunch the line actually wound around the restaurant and I was glad we planned brunch at 11 rather than noon per the PR rep’s recommendation. 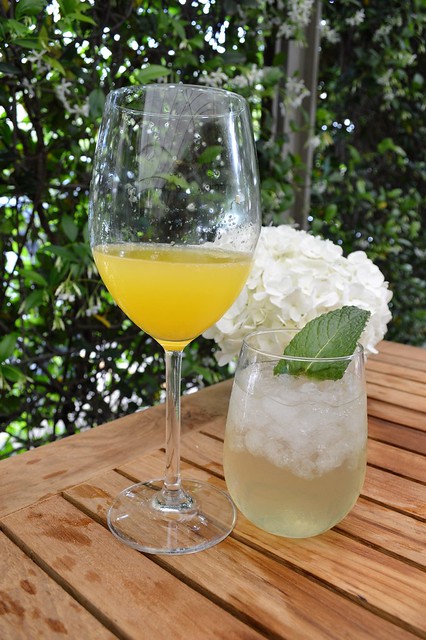 The line went quickly and we perused the chalkboard menu on the wall—wanting absolutely everything. Inside, the restaurant is bright and airy, and decorated in grey and white tones a la Restoration Hardware. 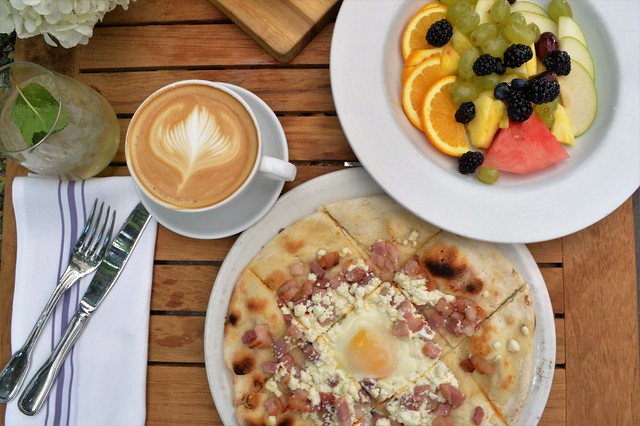 There were delicious breakfast favorites and breakfast pizzas, which we struggled to decide between. The lunch options also look delicious, with a turkey avocado club, steak salad, and a black bean and beet veggie burger. But, we wouldn’t bother with lunch—we’re Bitches—and there were too many mouth-watering brunch options. You order at the counter, with line cooks pulling enormous pizzas out of the brick oven directly behind. Once you’ve placed your order, restaurant staff seat you at your table and the food is brought to your table. It’s an interesting structure, but it works. 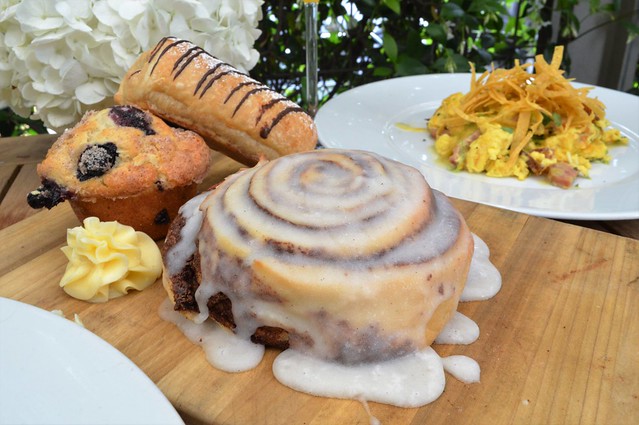 The day’s pastry board—a selection of three pastries with house-made jam and honey butter—was a must. We really struggled to decide between the selections of fresh-baked muffins, croissants, and scones. “We have to have a croissant,” we agreed, but then had to select between chocolate, almond, and traditional. “Blueberry muffin!” Alexis shot out. “Oh cinnamon roll is a must,” I said. Between our wide-eyed musings on carbs, we had made our decisions: chocolate croissant, blueberry muffin, and a cinnamon roll. Only in hindsight did we learn that Tiny Boxwoods is famous for its chocolate chip cookies, which we neglected to order. 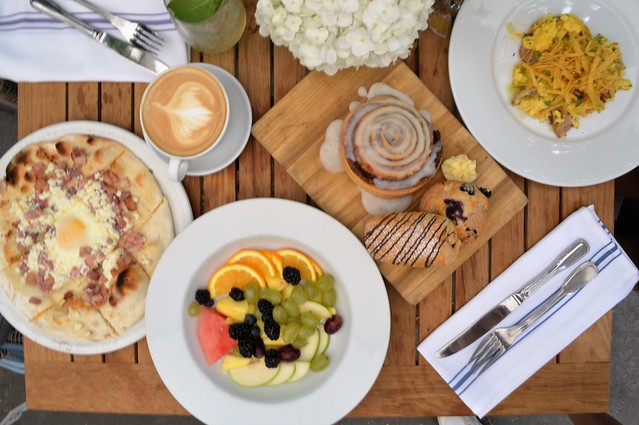 The cinnamon roll was the best of the three pastries, which were served on a wooden cutting board. The cinnamon roll was a classic: an enormous roll served warm and covered in a sugar glaze. It was large enough to cut into fourths—and good enough that I went back for that second quarter. The muffin was delicious and the croissant was stuffed with chocolate, but insufficiently flaky.

In addition to the pastries, we selected the fruit and honey over the fruit and yogurt parfait.  The fruit and honey, an enormous plate with sliced apples, sliced pineapples, grapes, blackberries, and raspberries. It was far too much fruit for the two of us—but I love beginning my meal with a hearty dose of fruit. 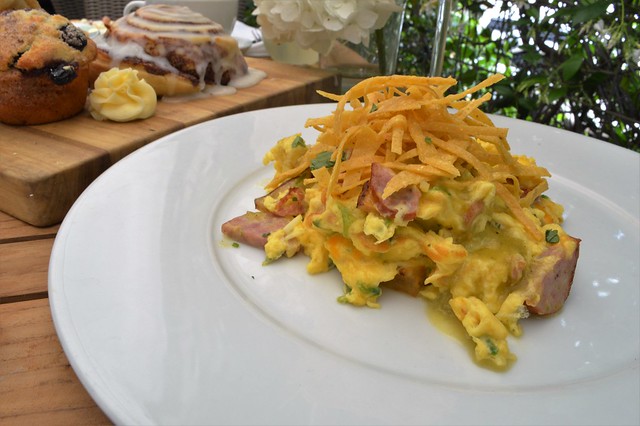 I ordered the house migas, the Spanish breakfast dish with scrambled eggs and sausage. This was a Tex Mex version—and packed with flavor. The scrambled eggs were mixed with sausage, cheddar cheese, potatoes, onions, and peppers—with green tomatillo salsa mixed evenly throughout. Topped with thin slices of tortilla chips, this blend of eggs and flavor was a hit by every measure.

I had tried to convince Alexis to order the chorizo and egg pizza, but she chose the bacon and egg pizza instead—BIG mistake. I kid, it was a slight mistake as the pizzas themselves, baked fresh in the brick oven, were incredible. The bacon and egg pizza had pancetta, goat cheese, and an egg served sunny side up, which she smeared atop the pizza. It had a bit too much cheese and fatty pancetta, and not enough of anything else, but the pizza, like I said, was incredible. 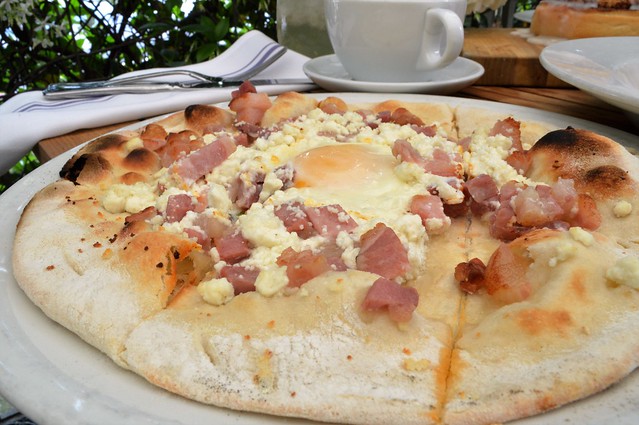 After brunch, we visited the outdoor nursery to stop and smell the herbs and flowers and went crazy over the selection of terra cotta pots. After winding our way through the nursery, we did a little retail therapy at the boutique filled with high-end home goods, gifts, and resortwear.

The Bitches say: A for a near perfect meal, save for a chocolate croissant and pizza that were slightly less than perfect. We loved the ambiance, experience, and cocktails and will travel to Houston again just to brunch.

Tiny Boxwoods serves brunch on Saturdays and Sundays and breakfast on weekdays.

BitchBiz: We were hosted by Visit Houston to experience all that the city has to offer. While this visit was comped, this article was written independently by Bitches Who Brunch.

One thought on “Tiny Boxwoods Brunch in Houston”