I have been spending a lot of time in Old Town as of late, and I have really become attached to the restaurants, people, and constant buzz around the neighborhood. While Old Town is stocked full of historic homes, landmarks, and iconic establishments, it is also bustling with buzz-worthy restaurants.

I decided to meet my friend Britt and her husband, Ryan, for brunch one late Sunday afternoon. It was a beautiful day, and the three of us decided that Old Town was our neighborhood to explore for the day; but where to brunch? 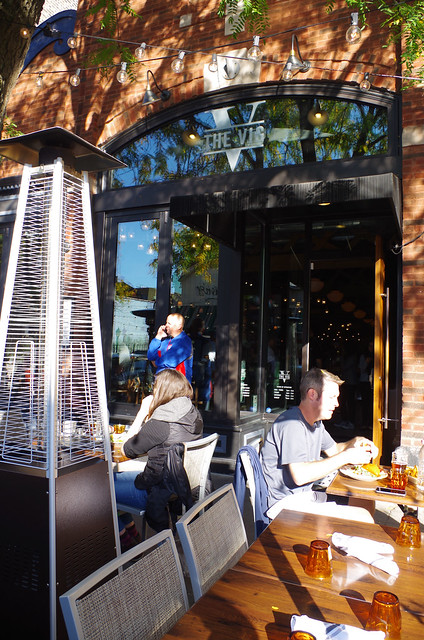 I had always walked by The Vig on Wells Street and been impressed with the amount of people there. It seems like the establishment was busy 24/7. I wanted to see what all the fuss was about, so I suggested it as an option. It was met with approval from Britt and Ryan—brunch plans made easy!

The Vig is a beautiful and enormous restaurant in the heart of Old Town on Wells Street, and as I mentioned, is always packed. I was concerned that since Britt, Ryan and I had decided to brunch later in the day, we wouldn’t be able to get a table. And of course, I was running late.

Thankfully, the waitress was able to seat Britt and Ryan inside at a four person high-top table near the front of the restaurant. It was a beautiful spot to enjoy brunch. It has floor to ceiling retractable windows, a good thing as the windows are the only natural light provided to the restaurant.

The three of us honed in on the doughnut holes and the crispy pork ribs for starters to share—two very contrasting appetizers, but nonetheless delicious dishes. 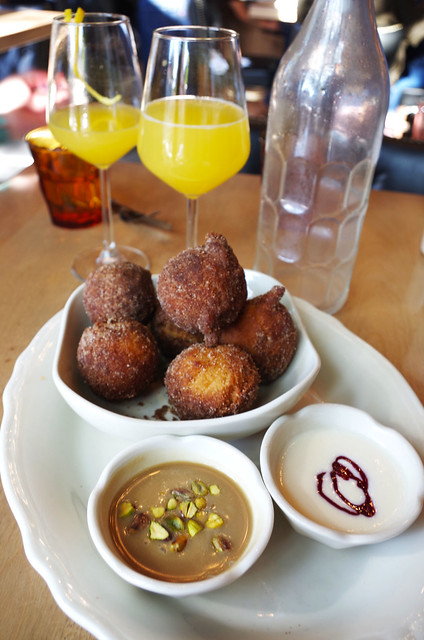 The doughnut holes were classic ginger and cinnamon homemade doughnuts, that are made right in The Vig’s kitchen. I was so happy when we asked to order them, and that they still had them in stock! The doughnuts came with a caramel pistachio sauce and a raspberry cream cheese glaze—it was pure heaven.

The doughnuts were light, airy, and perfectly dusted with sugar without being overwhelming. The raspberry and cream cheese glaze was by far the show stopper, offering a smooth finish to the bite—these are a MUST! 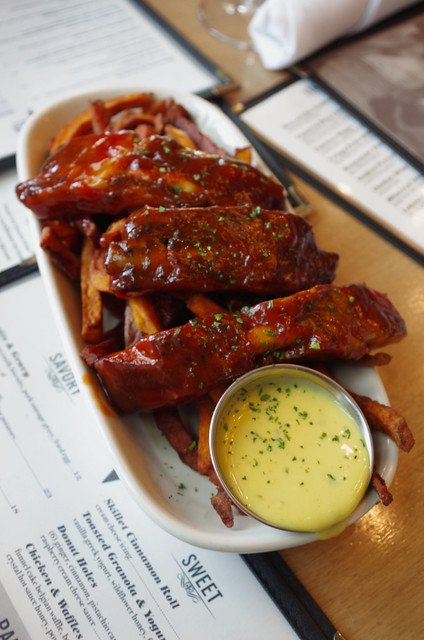 The crispy pork ribs were decadent, spicy, and fell off the bone—Ryan was a huge fan of these, along with the homemade fries that the four ribs were sitting atop. Because I was late to brunch, Ryan was quite ravenous and honestly, I didn’t have a chance to try one. I took him at his word that the appetizer was delicious. 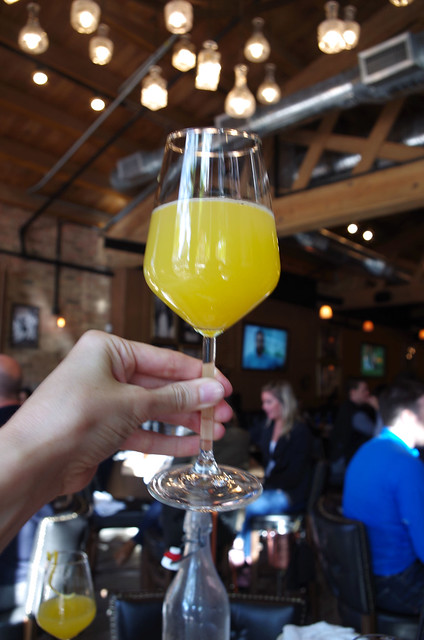 To go with these starters, Britt and I decided a sweet mimosa was the only way to wash down our appetizers and move onto entrees. The mimosa was the perfect combo of bubbles and juice—a full glass of champagne with a dash of orange juice. A Bitch despises nothing more than an ill-proportioned mimosa. 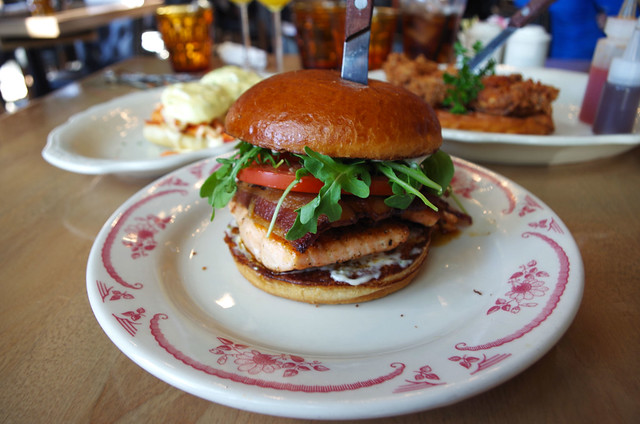 As we moved onto entrees, Ryan ordered the salmon BLT. The moment the words came out of his mouth, I remembered the fiasco we had on New Year’s Day. Ryan ordered a salmon BLT at brunch on NYE Day and was left miserably disappointed by the sandwich since it was a smoked salmon instead of a grilled filet. I jumped right in, to make sure he knew that the sandwich was not smoked salmon. Ryan looked at me a bit confused as to why I would ask such a thing about his dish. After jarring his memory, he thanked me—always looking out for you, Ryan.

Ryan’s sandwich was an impressive stack of salmon filet, bacon, arugula, tomato, and garlic aioli. It was a beautiful sandwich, and was held together by an enormous knife right through the middle—I guess that’s how you keep an over-stacked sandwich together? 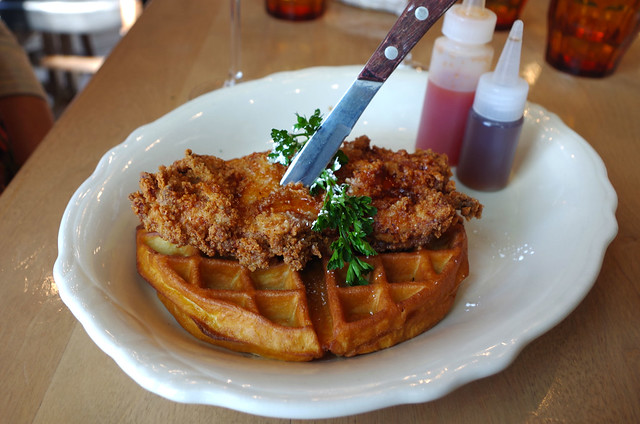 Britt saw the chicken and waffles and was set. The dish came out as a beautiful towering dish of fried chicken, atop a cakey waffle with a knife keeping everything in place. The dish came equipped with its own maple syrup and mild hot sauce, with the perfect amount of sauce and syrup. The chicken seasoning also had a kick to it, which nicely complemented the fluffy, and delicious waffles. Britt really loved this dish, and quipped she would order again for sure!

I wanted to step outside of my brunch norm and went for a former favorite: the lobster eggs Benedict. For awhile, I was on a lobster Benny kick, and for whatever reason, this dish caught my eye that day. The Benny came out, two glorious towers of poached eggs, lobster bits, and Hollandaise atop English muffins. The English muffin was soft and not toasted, which worried me initially that it would become soggy. However, I was pleasantly surprised that the muffin remained intact and withstood the puddle of Hollandaise it was sitting in. 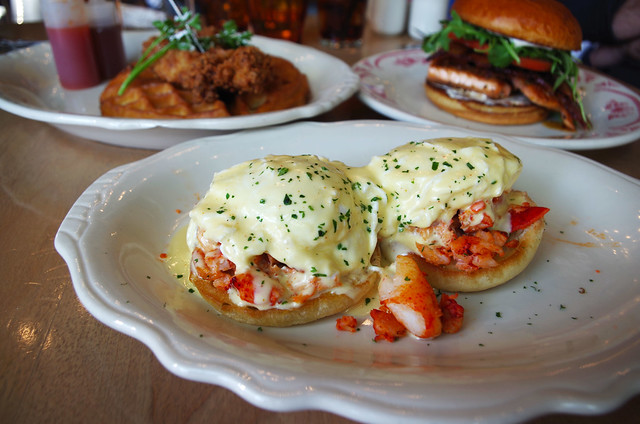 My qualm with this lobster Benny, in particular, was the size of the bits of lobster. The lobster was in small crumbles, not chunks like I have had in the past—pretty disappointing (and poor quality) for a $20 eggs Benedict.

All in all, The Vig was bustling the entire time Britt, Ryan, and I were brunching and boozing and ultimately, our experience was great with my one critique being the chintzy lobster eggs Benedict.

The Bitches say: B. This brunch was above average on the grading scale but do not opt for the cheap and chintzy lobster eggs Benedict.

The Vig serves brunch Saturday and Sunday from 10 a.m. to 3 p.m.