A few weekends ago, I met my friend Robert for brunch at The Spotted Dog on the Upper East Side, a newish pub-style restaurant on 63rd and First Avenue that invited the Bitches in for a visit. As usual, I was late to arrive, but this time I had a real excuse to back me up, one that almost threatened to derail our entire brunch experience.

While on the 6 train trying to avoid staring at a crazy man ranting about his right to a seat, I realized I had left the camera battery for my DSLR at home in the charger. However, as luck would have it, when I got off 59th street, there just so happened to be a camera shop within three blocks. I bought myself a battery, listened as the shopkeeper mansplained DSLR 101 to me, and basically saved the day. It was a classic case of the city coming through in the clutch. 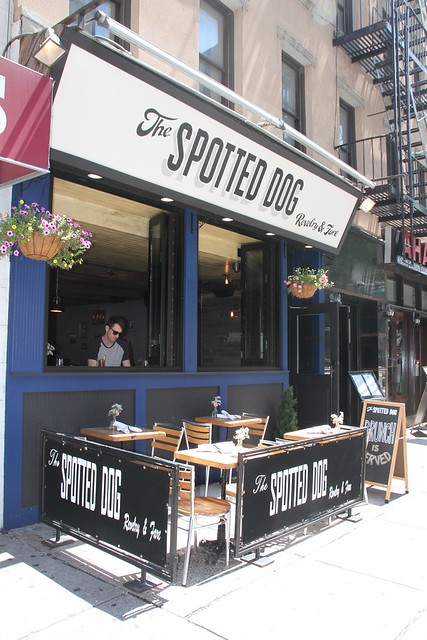 When I finally made it to The Spotted Dog, I walked in to see Robert diligently doing some weekend work at the bar on his laptop—and basically no one else. At least we had our pick of seats, and we chose to sit in the bar area at the lovely countertop facing the street.

After all my hustle and bustle, I was desperately in need of a Bloody Mary. The version here is classic and without frills; a spiced rim, olives, and celery sticks were the accoutrements du jour. Hardly memorable amid the sea of standout Bloody Marys in the city, but reliable and tasty nonetheless. (For the record, each brunch dish comes with a complimentary Bloody Mary, mimosa, screwdriver, tea, or coffee—something to remember, for sure!) 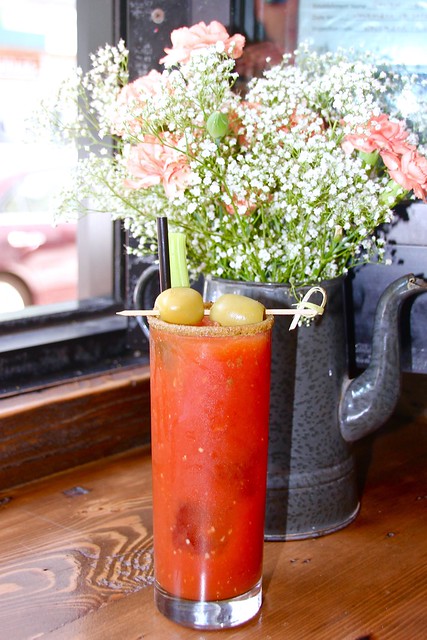 Before we arrived, the manager had the kitchen prepare some dishes for us, and obviously we couldn’t say no to chicken parmesan sticks and macaroni and cheese. But for the record, these two are not on the brunch menu, so you’ll just have to come back and get them for dinner. (I have a feeling this place is more popular in the evenings anyway—at least for now.) 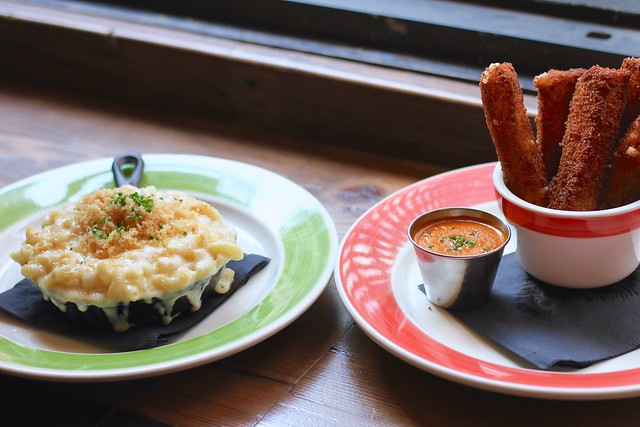 Ironically, these two dishes were my favorite of the brunch/bunch. The macaroni and cheese was pub-fare perfection. Each sticky, cheesy spoonful had me wanting more, and the breadcrumbs on top added a nice bit of texture to each bite. Plus, mac and cheese isn’t finished without a crumb topping, am I right? I know I am. 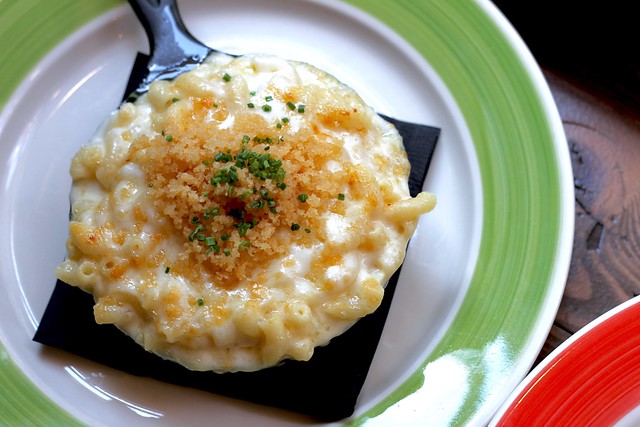 The chicken parmesan sticks were also tasty and a meal in their own right. You only need one to get the idea—half chicken, half fried mozzarella, full flavor kick—but good luck stopping yourself there. 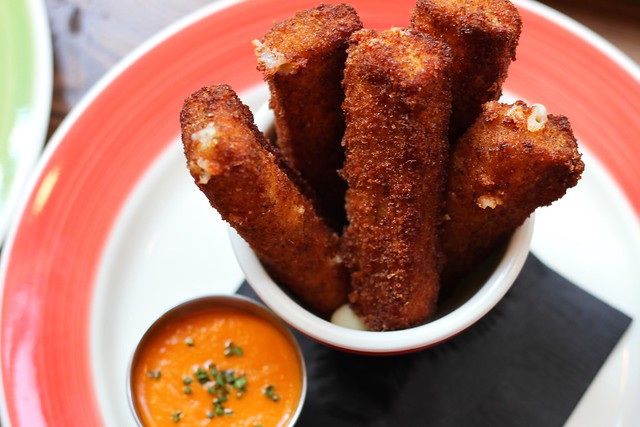 To enhance these dishes, and those that followed, we were also given a taste of the chef’s housemade hot sauce, a secret concoction that included fish sauce and who knows what else to deliver a kick in the mouth, in the best way. This Bitch was floored and in love, and I put that sauce on everything (sorry, not sorry, Frank’s Red Hot lady). In fact, it’s received such adoration from the restaurant’s customers that the chef is looking to bottle it and put it on sale. Stay tuned… 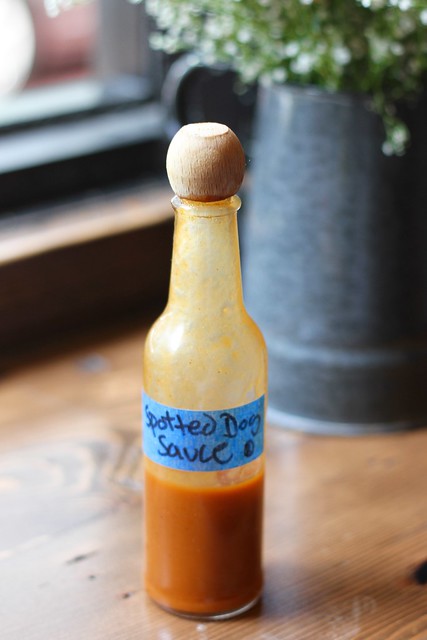 Robert and I decided to do the most and order three brunch entrees: the skillet eggs for me, the roasted asparagus for him, and the ham and grilled cheese for us. 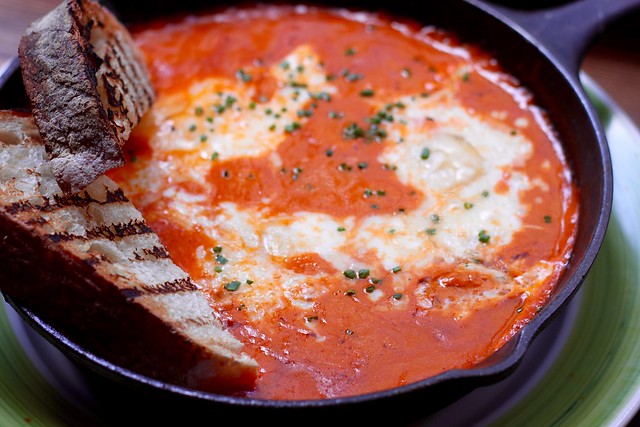 Our waitress warned me against the eggs, saying that people generally prefer other dishes during the summer, but I’m never one to listen to good advice, so I went for it. The dish arrived piping hot, and I immediately felt a pang of regret. (Or maybe it was just a heat wave from the dish’s cast iron skillet, hard to say.) But I persevered and I grabbed a piece of grilled bread and dug in. I know I could have crushed this combination of flavorful and spiced tomato cream sauce, eggs, and Irish bangers (sausage) on a chilly October day, but on that July afternoon, I had a hard time making a dent.

Luckily, Robert’s asparagus dish was on the lighter side. An unusual combo, the scrambled eggs (you can get them cooked any way you want), chopped asparagus with applewood-smoked bacon, and lemon zest were surprisingly tasty and a good balance to typical carb-heavy brunch dishes. We both truly enjoyed it. 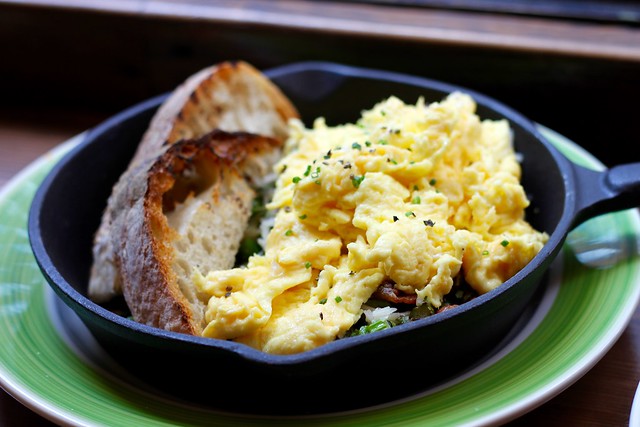 Last but not least, The Spotted Dog’s version of the classic croque madame: a grilled ham and cheese sandwiched with a fried egg topper. Hard to eat (fork, hands, who knows?) but easy to enjoy, this dish was cheesy, salty, and enhanced by wedge-cut french fries. If we hadn’t eaten so much mac and cheese, I know we could have finished it. 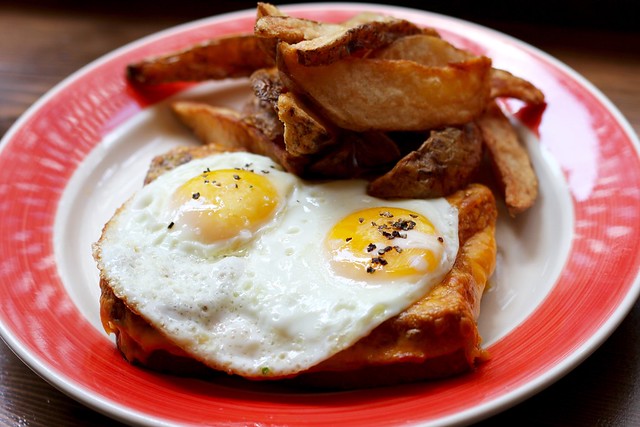 If you live in the neighborhood, I can definitely see this place becoming a staple. I’m not sure I’ll be making the journey from Harlem to this spot too often, but I’m happy to have another solid spot to recommend to friends in the area. Thank you for having us, The Spotted Dog! And please call us when that hot sauce is for sale—seriously.

The Bitches say: Four flutes. Classic and tasty brunch dishes will likely be a pull for Upper East Siders, but we won’t be flocking from afar for this one.