This winter has been dominated by record-shattering arctic blasts that are sending shivers across New England.  So, The Lansdowne Pub in Boston’s Fenway neighborhood figured the best way to warm up was a mug of cocoa – with a grown-up twist. I was lucky enough to be invited to their annual boozy hot chocolate brunch because as the event flyer noted: “It’s the kind of weather that has you stepping outside and saying… NOPE.” 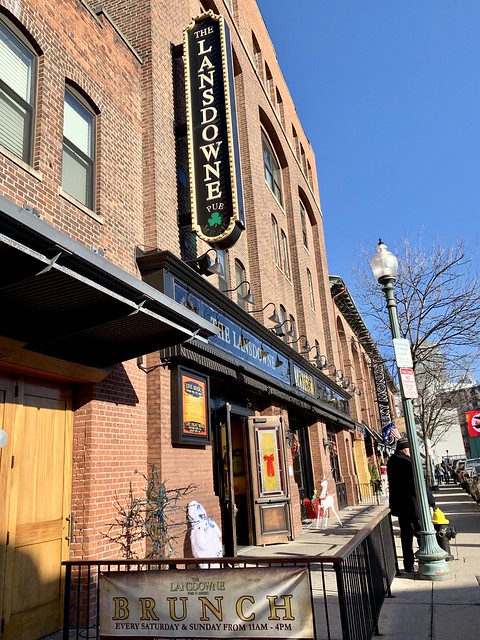 My husband Mike and I arrived at the huge Irish pub style dive bar behind Fenway Park amidst a slew of rowdy pub-crawlers. This dimly lit pub with dark wood and an expansive bar is a go-to spot after a Red Sox game for the live music scene, but this Saturday afternoon I welcomed the suggestion to sit in a more secluded back room away from the frenzy of the main bar. 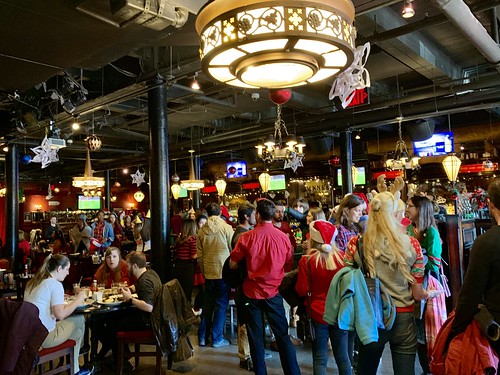 The hot chocolate bar was set up nearby, so we grabbed some mugs and began to take our hot chocolate to the next level. The display was stocked with whipped cream, candy canes, multi-colored marshmallows, and festive sprinkles that we took full advantage of. To add a shot of alcohol, you had to venture to the main bar for an added fee. I chose Baileys for a classic twist, and Mike opted for a shot of bourbon. A few sips later and sporting some whipped cream mustaches, we chatted about how we enjoyed the interactive concept and plethora of toppings and were surprised that only a few others were taking advantage of the event. 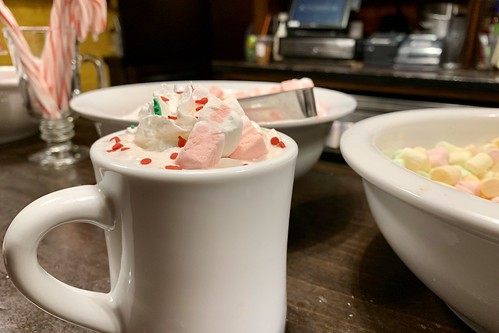 In true Irish pub fashion, we decided to order some additional drinks. Mike enjoyed the Lansdowne ice, which was a well-proportioned mix of Jameson, Kahlúa, cold brew iced coffee, and Irish cream. I ordered the pomegranate mimosa which had a festive, deep berry color and the pomegranate juice and ginger simple syrup complemented the Champagne nicely without being too overpowering. 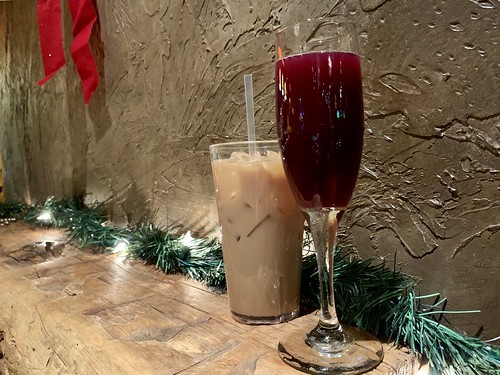 As a starter we decided to share the apple crumble pancakes. These dessert-like pancakes arrived swimming in a cinnamon sugar-type glaze and were topped with a mound of sautéed apples and a sprinkle of oatmeal cinnamon streusel. We couldn’t wait to dig in, but unfortunately we found that the pancakes were overcooked and some of the apples were crunchy and under-cooked. 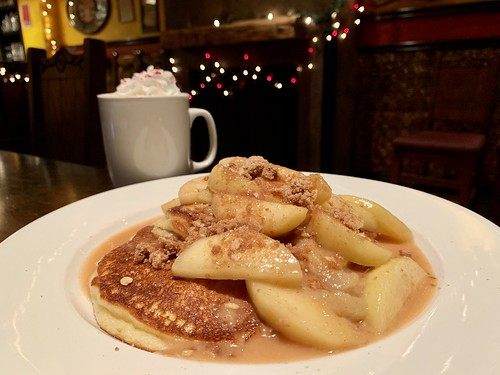 We went the savory route next. The waitress assured me the two eggs any style dish was visually pleasing for photos (she clearly knows us well), so I ordered two eggs over medium with home fries, toast, and ham that came out looking photo-ready. The eggs were cooked with just a slightly runny yolk. I layered them atop the toast and grilled ham slice. While the home fries on the side weren’t the best I had ever had, they also weren’t the worst, so I’d give them a solid five out of ten. 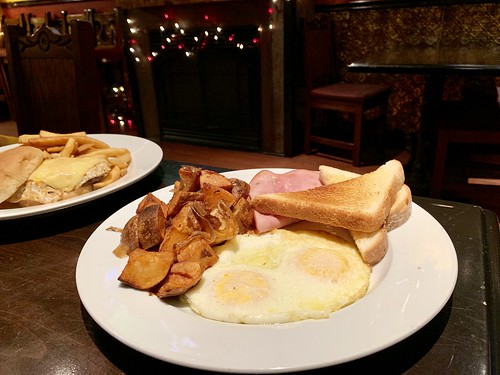 Mike ordered the four-ounce breakfast burger topped with a fried egg and cheese on a butter toasted bun, which, as a self-proclaimed burger connoisseur, he found underwhelming – especially for a pub. The burger was super thin, and not in the good In-N-Out Burger way, so the meat-to-bread ratio was way off.  But it didn’t stop him from washing it down with yet another fully loaded hot chocolate. 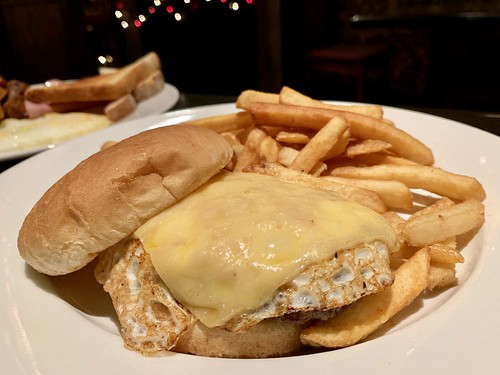 The Lansdowne Pub in Fenway is a good venue for a pub crawl or post-game drink with its expansive bar, tasty cocktails and festive events, but if you’re looking to be wowed by the brunch I would keep searching.

The Lansdowne Pub serves brunch every Saturday and Sunday from 11 a.m. to 4 p.m.