It was Pride Sunday in New York City, and everyone and their mom wanted to go to brunch—or in my case, my dad and I. That’s right, this past weekend I made my Alpha male father an honorary Bitch for a few hours, as we brunched at The Harold, an American bistro in Herald Square.

I’m not one to choose a Midtown location for anything, let alone brunch on an extremely busy Sunday. But my dad had a train to catch, and in typical dad fashion, he wanted to get there early without having to run into traffic. The Harold was only a few minutes on foot from Penn Station, and so the stage was set. 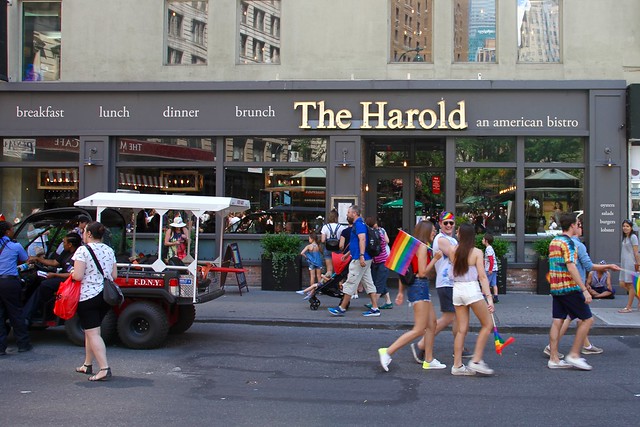 As usual, I arrived about 15 minutes late, but I’m sure it seemed like forever to my poor father, who had shown up an hour early—sorry, Dad—to wait for me at the bar. We waited there a few minutes longer for a table to open up on the first floor of the restaurant, a much more crowded and intimate space than the floor above.

When the time came to sit down, I had to squeeze myself in between my table and the neighboring one, almost knocking someone’s meal into their lap in the process. At this point, I was already wary. How was I supposed to get a good angle for a photograph if I could barely maneuver around at my own table? 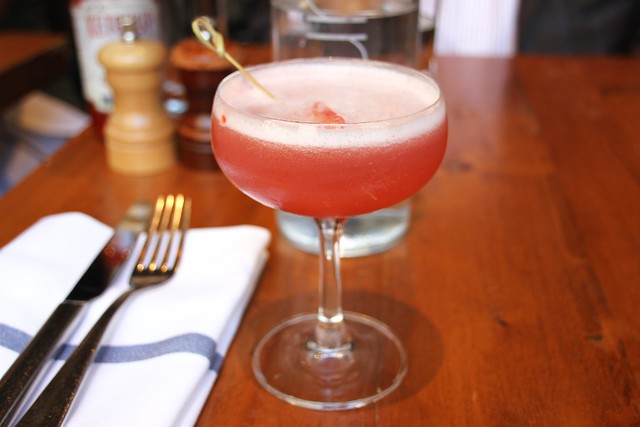 Anxiety slightly heightened due to the close quarters, I made a beeline for the cocktail menu. While squeezing into my seat, I had gotten up close and personal with the Bloody Marys on the table next to me, and they looked a bit watered down.

I opted for the light-sounding Strawberry Fields instead—a mix of vodka, fresh lemons, strawberries, and prosecco. I love each of these ingredients on their own, and I can now definitively say that the whole is greater than the sum of its parts.

The tangy, just-sweet-enough concoction was a perfect treat for the hot day, and were I not with my father, I might have indulged in multiple rounds. My dad just went with a water—he’d already indulged in a bellini (and fries) while waiting for me. 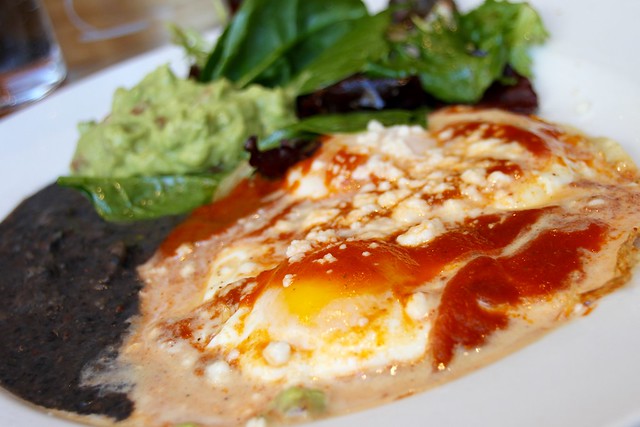 One of my hobbies is reading menus, so obviously I picked out what I wanted to eat before arriving and came prepared to order: the chorizo and manchego scramble, please, plus a side of avocado just for kicks.

The menu had a lot of great-looking options, so the choice was a tough one. Perhaps considering his prior indulgence, my dad went the healthy route and ordered the frittata. Ever the over-orderers, we also got sides of grits and bacon. 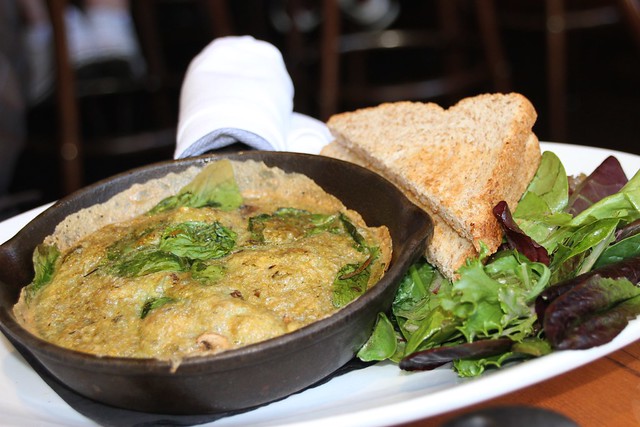 The entrees arrived in a timely enough fashion, considering the restaurant was packed for the celebration, and I got to work. Halfway into my huevos rancheros, I realized I was eating the wrong meal. A waiter had brought me someone else’s huevos and sent my scramble who knows where.

I continued with the dish I’d been given, which was tasty enough combo of two sunny-side-up eggs, corn tortillas, queso fresco, guacamole, and refried beans, but I was disappointed I didn’t get what I came for. Our nice waiter apologized, but the damage was done. 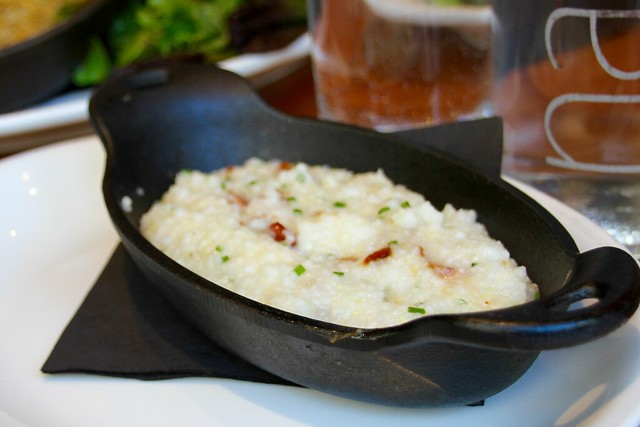 Tasty enough was the name of the game for the most part. My dad’s mushroom and kale frittata, with its side of roasted potatoes hidden by two slices of toast, was “good” but lacking in flavor. The grits came out lukewarm and also could have packed more of a punch. The bacon—thick cut, salty, savory, and delicious—was the table’s saving grace. I ate three pieces.

All in all, The Harold was pleasant and polished (in spite of the order hiccup), and my dad and I had an efficient brunch in under an hour. Not every dish is memorable, but I’ll probably be remembering the bacon and Strawberry Fields forever. If you’re in the area and in need of a quick bite before catching a ride out of town, it’s a solid option a visit.

The Bitches Say: Four flutes. The food was tasty enough and the location is very convenient, but bringing out the wrong dish knocks off some points.

The Harold serves brunch on Saturdays and Sundays from 8 a.m. to 4 p.m.