The Gage has been a Chicago classic since 2007. The restaurant’s prime location on Michigan Avenue makes it the perfect, centrally located destination for after work drinks, business lunches, Chicago visitors, and culture vultures on their way to the Art Institute, Millennium Park, and the theater. My husband Chase and I had visited many times for dinner and drinks, so we were excited when the restaurant invited us in to treat us to our first foray into brunch. Spoiler alert: it won’t be our last. 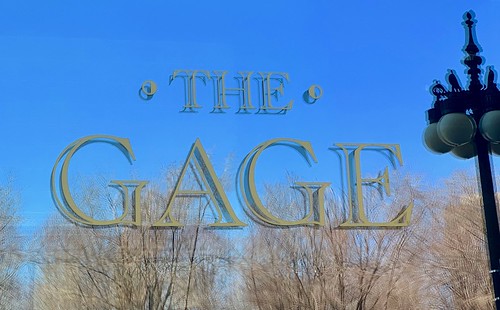 I would describe The Gage as a refined, upscale pub. On a Saturday afternoon, its vibe is lively and boisterous, but still sophisticated and elegant. It’s known for its rustic design, American fare, and attention to detail.

The restaurant was packed as we nestled into one of the big leather booths in the back and scanned the menu. Their cocktail list is creative and diverse, but we settled on a Bloody Mary and a habanero margarita. 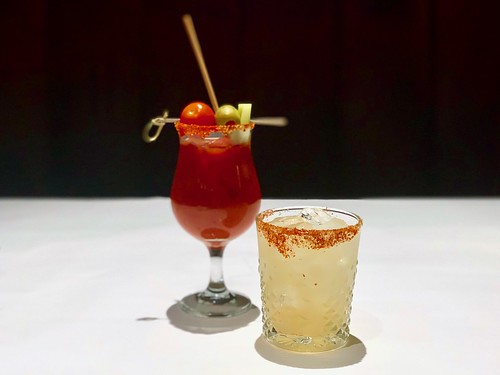 The Bloody Mary was great, but the margarita is the one we will be coming back for! We’ve been known to seek out spicy margaritas, and this is among the best we’ve tried. Beware because it is indeed spicy – but if you can handle it, we highly recommend this cocktail. It was served in a beautiful glass with spicy salt pouring down the side.

We started with an order of the coffee cake, which came with hazelnut butter and sea salt. This turned out to be our favorite dish of the entire brunch – you absolutely must order it! We couldn’t even finish our first bite before we were raving about it to each other. It tasted fresh, flavorful, moist and dense and was served warm. We expected the hazelnut butter to be traditional butter infused with hazelnut flavoring. We were pleasantly surprised that it was homemade nut butter incorporating imported ingredients from Europe. We tracked down the server to tell him we would be coming back just for the coffee cake, which he credited to the restaurant’s new pastry chef, Greg Mosko. Greg Mosko – you are a brunch hero! 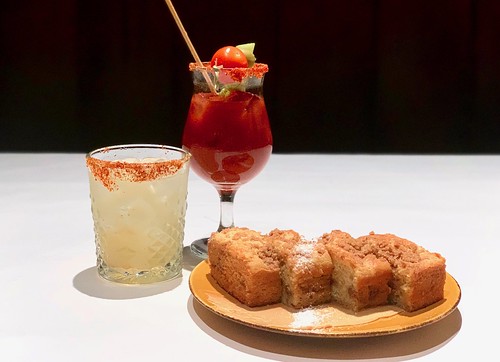 We sampled one more decadent appetizer – the “PBR” battered fried pickles with smoked serrano aioli. It was a large portion – probably better for a table of four than two, but delicious. As pickle enthusiasts, we could have used a little more pickle, a little less batter, but that didn’t stop us from eating most of them – whoops! 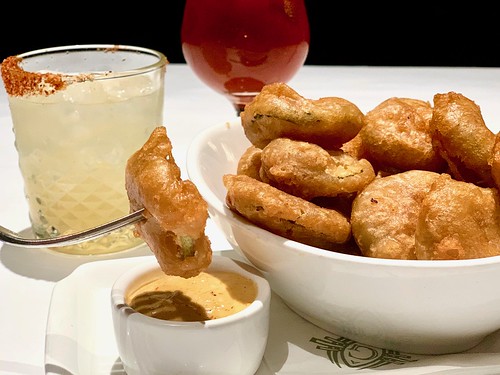 For entrees, I ordered the simple salad with hanger steak, and Chase tried the Irish breakfast. The salad’s flavors were anything but simple. The spicy seasoning on the steak is what popped the most. The honey-sherry vinaigrette added bright flavors to the mixed greens, shaved cheddar cheese, and cucumbers. The entrees were served on beautiful plates with The Gage’s logo. 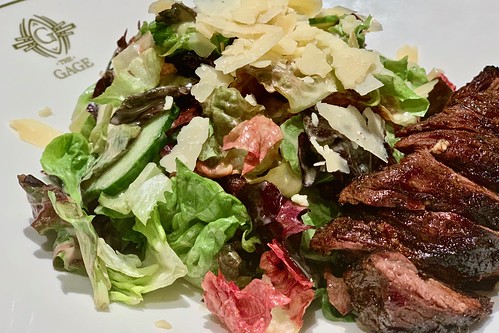 Chase customized the Irish Breakfast a little bit – ordering scrambled eggs instead of eggs over easy. The dish came with an array of homemade sausages, layered over beans and bacon with a side of toast, arugula, and a grilled tomato. It seemed like every time we thought he had reached the bottom of the dish, we found another layer. He reports that the dish was excellent, and the bacon was the best part. 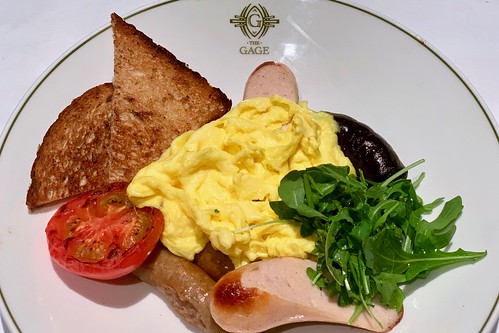 Overall, this brunch was sensational. We had pretty high expectations based on our past experiences, but we really were pleasantly surprised. The coffee cake and the margarita were the highlights, and the service was impeccable. Our waiter was attentive, and management and executive chef Chris Gawronski made appearances in the dining room, which was a nice touch.

The Bitches say: five Champagne flutes! This Michigan Avenue destination in the Loop does brunch as well as anyone in town.

The Gage serves brunch Saturdays and Sundays from 10 a.m. to 4 p.m.