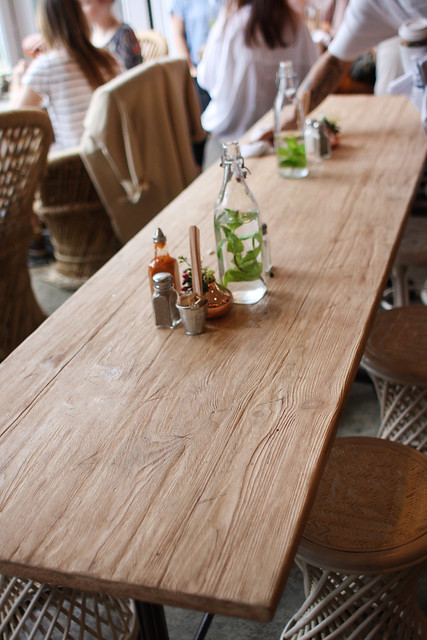 We woke up to a torrential downpour. Like, the kind of downpour that makes an umbrella completely pointless because the rain hits you at all angles. I completely misjudged the weather and insisted Paul and I walk from the subway, which was a terrible idea because by the time we arrived at brunch, my Birkenstocks were a different color and Paul’s jeans were soaked through. Who doesn’t love sitting in wet clothes and eating eggs Benny?! Woof. 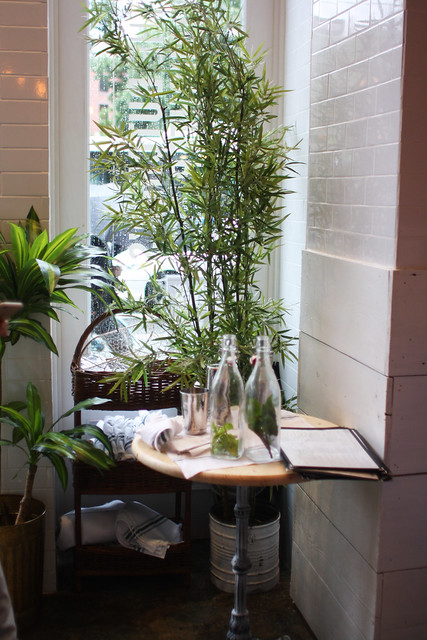 Luckily, The Butcher’s Daughter in the West Village was a dreamy vacation from the storm outside. Greenery and light flooded the miniature restaurant, and the decor paid homage to its focus on green, clean eating. Communal tables spanned the width of the restaurant, with petite stools at the bar for additional diners. 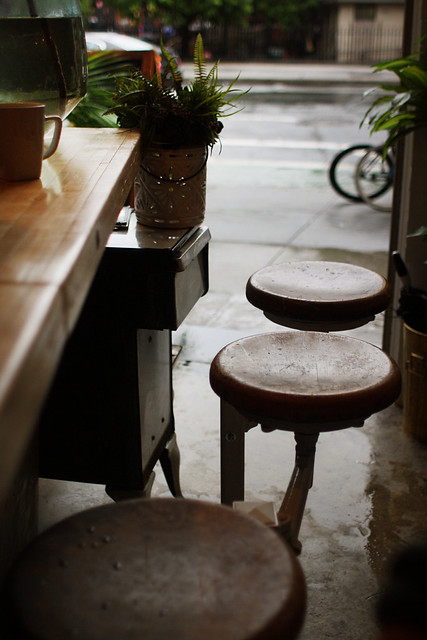 We’re seeing more and more restaurants popping up in the city focused on non-dairy, non-meat entrees and I am big-time loving the healthy vegetarian trend. It’s so much easier to get to brunch on a weekend and still feel like you’re maintaining a healthy lifestyle with places like The Butcher’s Daughter. They do a great job in both locations carrying this theme through every detail of their aesthetic and menu. 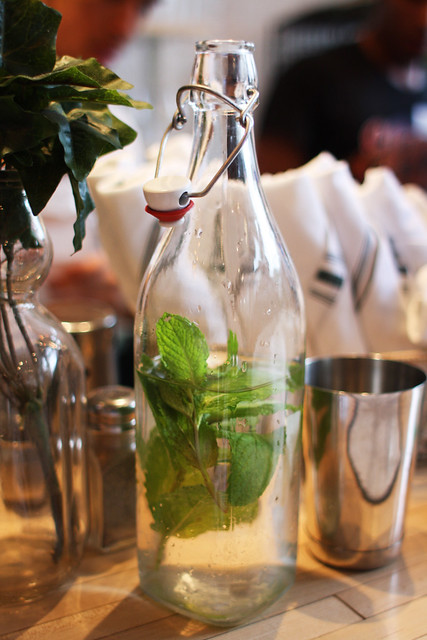 The Butcher’s Daughter has been around a while downtown (we reviewed it back in 2014), but when I saw that a West Village outpost had recently opened, I decided that a new review was in order. 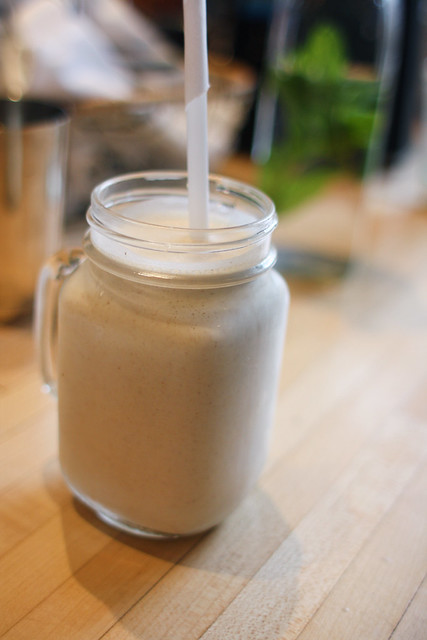 We started with smoothies, and I couldn’t resist the Brass Monkey with banana, peanut butter, raw honey, almond milk, and maca. This was really good, and a meal by itself. There was a broad selection of wellness lattes and teas, cold-pressed juices, and raw smoothies, and if I lived closer, I’d stop by here all the time for the drink menu. 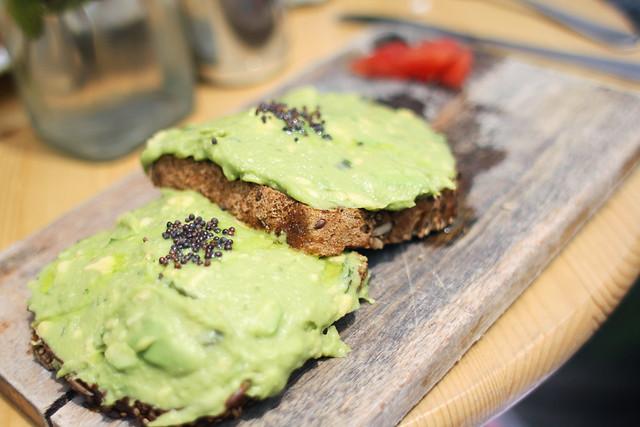 We started with the avocado toast with cilantro, lime, and mustard seed. It was basic, but satisfying. 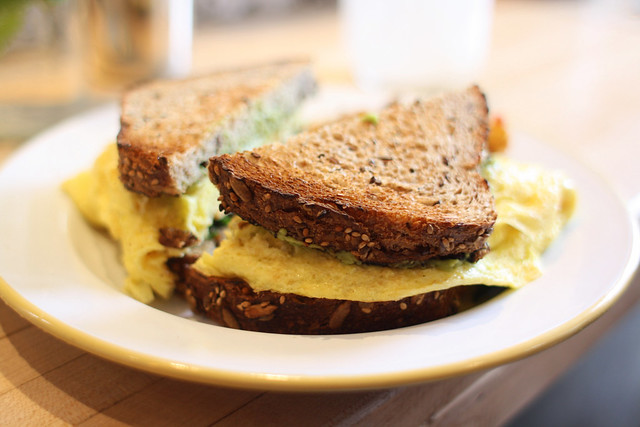 For our entrees, I selected “the best egg sandwich” served with multigrain bread, harissa mayo, cheddar, avocado, and egg. Unfortunately, this was far from the best. It was extremely dry and the bread took over the lackluster bite. The vegan mayo was just plain strange, and left a bizarre aftertaste.

I was forced to grab for the hot sauce to dress it up (something I’m strongly against at restaurants), and noticed everyone sitting around me was doing the same to their dishes. Not a good sign. 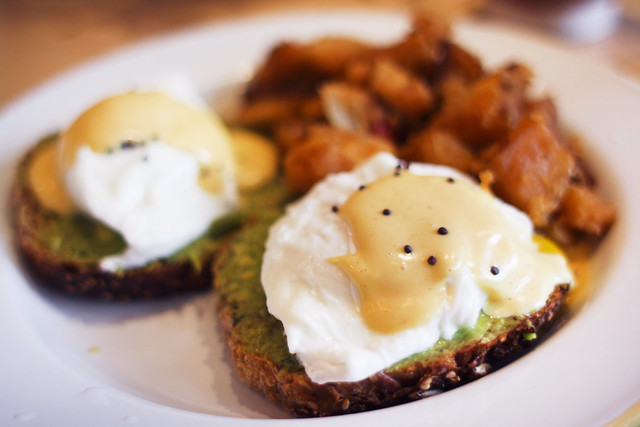 Paul selected the smashed avocado Benedict, which sounded perfect on paper. Unfortunately, the bread was once again like cardboard and the avocado was plain and un-seasoned. Where was the curry flavor we were promised on the menu? It didn’t come through in a single bite.

Even worse, the eggs were disgustingly under-cooked. So runny that I took one look at them and pushed the plate away. I imagine that any faint-hearted vegetarian coming to Butcher’s Daughter to avoid thinking about eating animals would take one look at that goopy egg and lose their appetite completely. Ick. 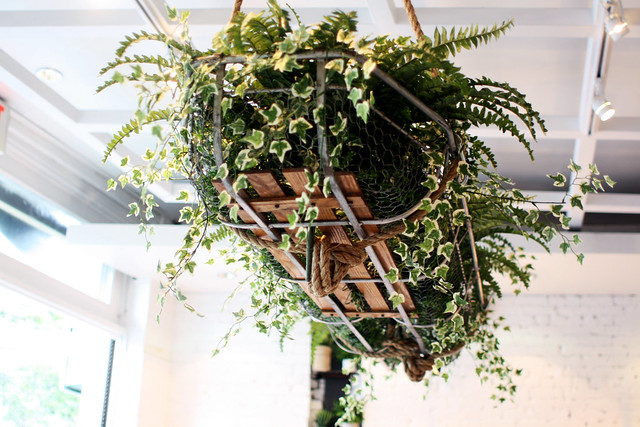 We both wished we’d stopped with the smoothie, which is totally disappointing. After having great experiences at the other location and feeling excited for a healthy meal to start our Sunday, we left hungry, still slightly damp, and put off. 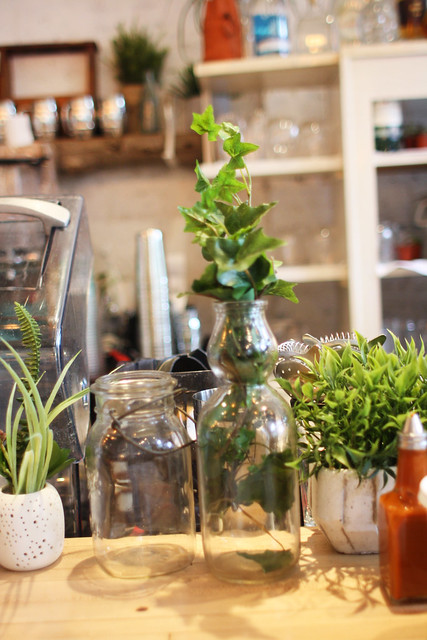 The Bitches say: D+. It’s unfortunate that The Butcher’s Daughter spent so much time perfecting their uber-cool space and clean eats theme, and gave little attention to the execution in the kitchen. The menu is robust and sounds great on paper, but the food needs a lot of work.