I’ve had quite a few adventures with my best friend, Steph, as we’ve been adventuring since our college days at UNC-Chapel Hill. From Spain to San Diego, to wild nights in Manhattan and the beaches of North Carolina, we’ve found ourselves in quite a few random locations. The latest adventure brought us to Long Beach, California, the first stop on our visits to Joshua Tree National Park, Palm Springs, and Los Angeles. 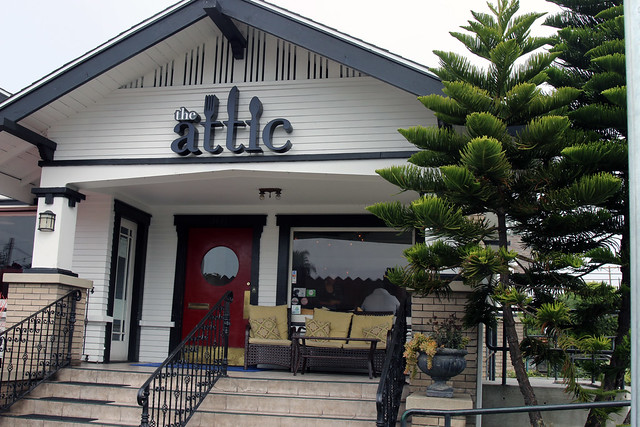 A city adjacent to Los Angeles, Long Beach exudes chill vibes and California cool, with its casual cafés and vintage boutiques. While it was a foggy morning, we were in great moods as we pulled the rental up to the Attic on Broadway, a charming little restaurant that’s built into a cottage with a great outdoor space. It was relatively quiet, as it was a weekday, and we were seated in the covered, heated outdoor patio nearby a cozy little fire. The wooden bar with white, vintage vibes made me feel like it would be a great place to come at night for cocktails, too. 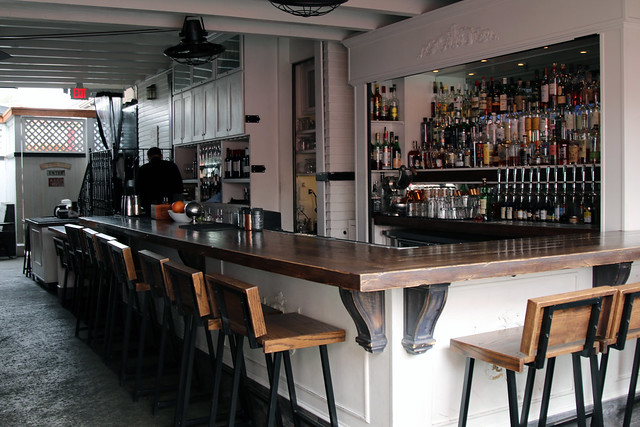 There’s a solid selection of breakfast burritos, Benedicts, and scrambles on the menu. The menu items that caught our eye were the chicken fried steak, the breakfast burrito, and the Monte Cristo, a dish made with cinnamon French toast, ham, turkey, and Swiss cheese. That’s quite the sweet-savory sandwich. 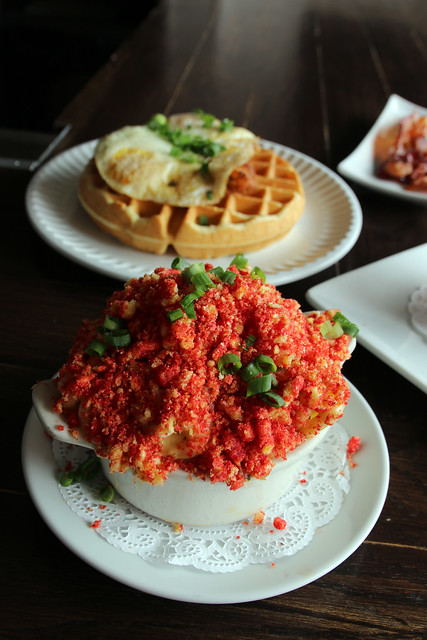 The Mac n’ Cheetos, a signature Attic dish, is mac n’ cheese, with spiraled, thick noodles and cheddar, jack, and mozzarella cheeses, topped with crumbled flaming hot Cheetos and spirals of green onion. There are six types of this inventive, cheesy pasta: a classic variety, one topped with pecan smoked bacon, another topped with jalapeño and bacon, and yet another offered mushrooms and onions with your flaming hot Cheetos. The vegetarian variety featured soy chorizo and an over-easy egg. We had no doubt in our minds which we would select: the Hey Shorty, a classic mac n’ cheese with the addition of short rib. We like our food hearty. Bring on the beef. 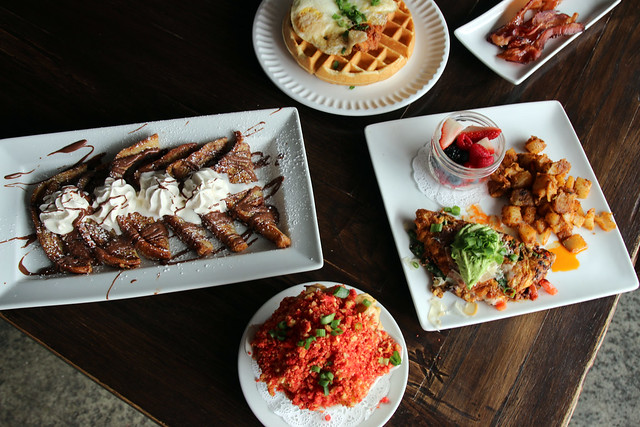 Steph loved her veggie-packed egg dishes, so she selected the Berkeley, available as scrambled eggs or an omelet. She chose the omelet, which was filled with soy chorizo, spinach, Parmesan cheese, tomatoes, and mushrooms, and topped with avocado and swirls of green onions. The plate was hearty, and packed with a nice omelet and plenty of hash browns. California knows its hash browns. The omelet was perfectly done and the ideal hearty brunch date for those looking for something healthy, yet filling. 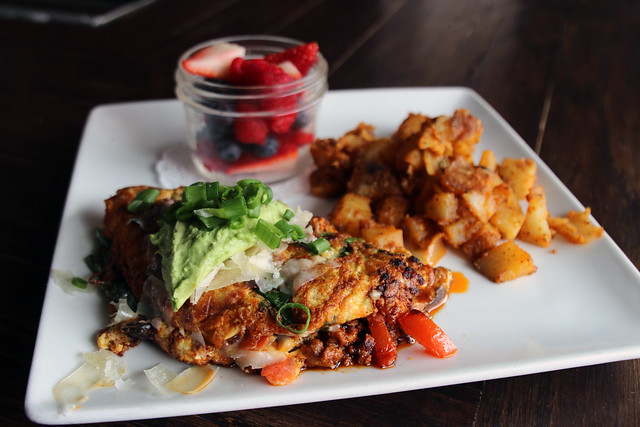 Meanwhile, I chose the chicken and waffles—hold the gravy, topped with a fried egg. While I was cautioned that gravy made the dish, I took a risk and opted to forgo the gravy. I don’t really love gravy, to be honest. The organic chicken breast was so moist and fried perfectly—it reminded me of KFC, but much, much better. I drenched the thing in classic maple syrup, which added the necessary moisture and flavor. California does its classic brunch dishes well, and this was no exception. A top-notch, sensible take on fried chicken and waffles. 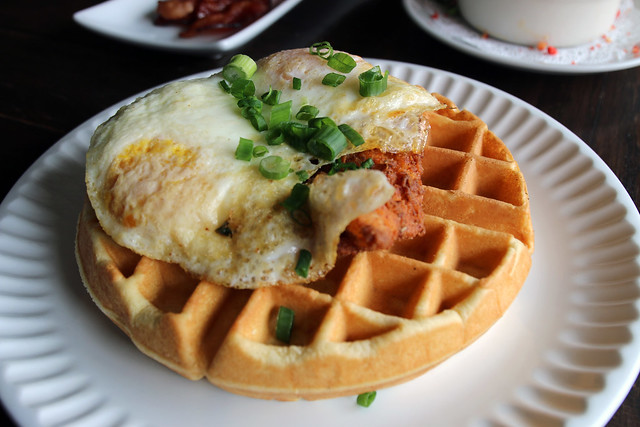 The Nutella French toast lived up to its name, with classic, triangular slices of thin, white bread, battered in eggs and cinnamon, fried, and then covered in Nutella and house-made Chantilly cream. The plate was enormous—this would be a spectacular dish to share amongst friends. And, while the combination of bread, whipped cream, and Nutella would be enough to make a dish delicious, this French toast was noteworthy, for the strong cinnamon flavor and its texture: crispy and fried on the outside, and moist on the inside. This is certainly one of the better dishes of French toast I’ve ever sampled. 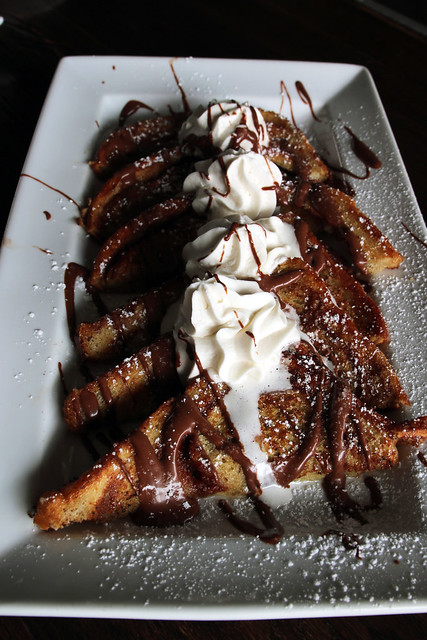 Sadly, French toast does not keep, so we refrained from bringing the leftovers on our hike and overnight camp in Joshua Tree.

There’s a pretty solid selection of sides, including ham grits, biscuits and gravy, potatoes, biscuits, soy chorizo, sausage, and two types of bacon. Being that Bitches love bacon, we selected both the pecan wood smoked bacon and the candied cayenne bacon. It was hard to tell the difference based on appearance alone, as both were glazed and sweet. After sampling, the pecan bacon was crispy and sweet, while the candied cayenne had an after-bite of spice. 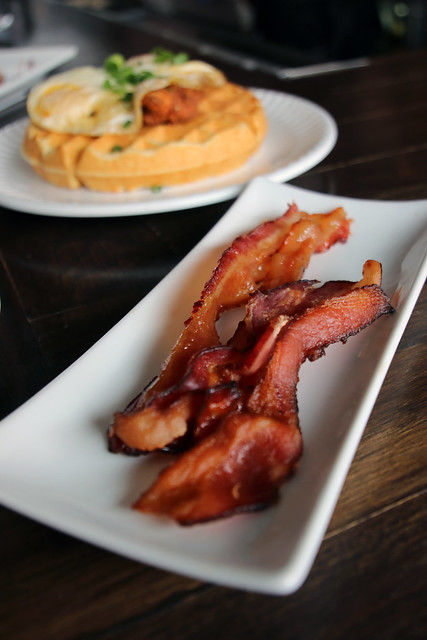 I may have been influenced by the great company and California coolness, but the Attic was one of my favorite brunches to date.

The Bitches say: A. A great ambiance with casual, friendly service and creative, delicious brunch fare.

The Attic on Broadway