Living in Boston, I admittedly don’t “cross the river” often. Cambridge feels like a distant country that requires you to get a passport, pack a bag, and wait in line at security to enter. But after being invited to try brunch at Temple Bar, located on the border of Harvard and Porter Square, I’ll be booking my trip to Cambridge much more frequently – and with companion passes. 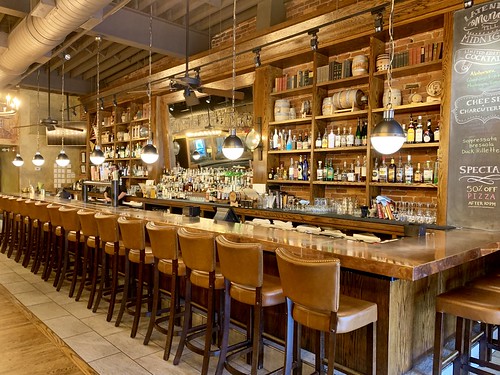 My sister Katie and I walked into Temple Bar and immediately felt welcomed by the cheery staff. The restaurant, named after the trendiest area in Dublin, fittingly had chic décor including a copper bar, long draped curtains, and leather booths. They also had an A+ music playlist in the background. We chose an indoor window seat overlooking Mass Ave., although the entire time Katie looked longingly out the windows at the patio seating filled with adorable dogs. 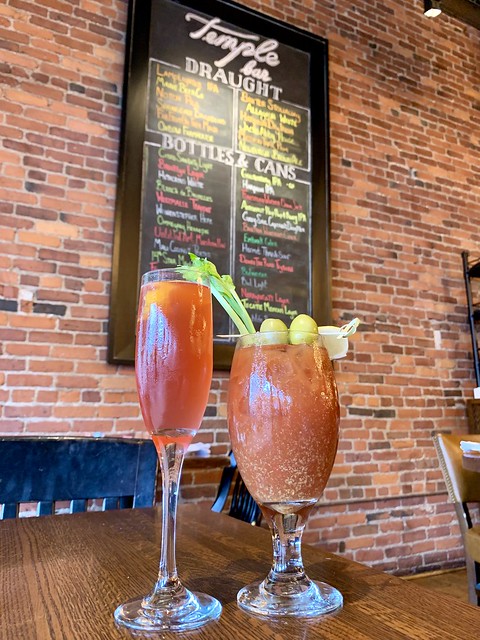 We requested two lattes and perused brunch menu for cocktails. The “buchamosa” stood out to me as the most unique, with gingerberry kombucha, orange liquor, and sparkling wine. The flavor combination proved to be one-of-a-kind with a touch of sweet, a dash of spicy, and a hint of citrus. Katie ordered the Bloody Mary, and it arrived on the milder side, garnished with two pimento stuffed green olives, crisp celery, and lemon and lime wedges. For those not looking to get tipsy at brunch, you can also check out their spirit-free cocktails. 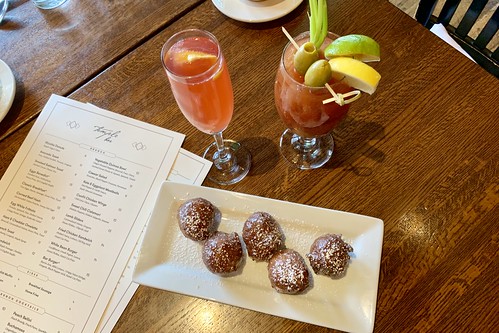 Five warm ricotta doughnut holes came out next, courtesy of the chef. Now, doughnut holes don’t usually excite me. They remind me of Dunkin’ munchkins that are plopped on meeting room tables at 8 a.m. and sit around until they’re borderline stale. But these doughnut holes actually made us speechless; Katie and I took a bite, locked eyes and just knew we both needed a moment. The airy texture and the light maple sugar glaze made them the most delectable balls of fried dough we had ever eaten. They must have been magical as well because they did a disappearing act within minutes. 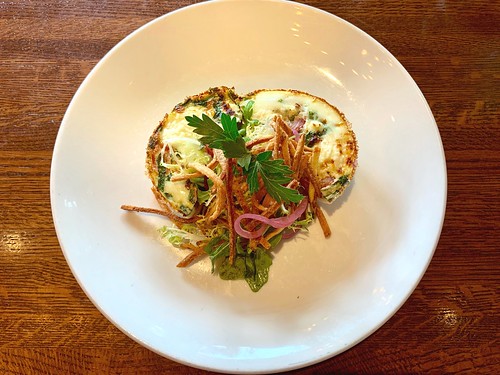 We ordered the tomato and spinach frittata next and it was served with a side of crispy potato strings and radicchio salad. This guilt-free dish was delightfully light and the potato strings were a fun, unique take on traditional breakfast potatoes. Complimentary house-made cornbread also arrived to the table, which I don’t usually see at brunch but it made a welcome impression. 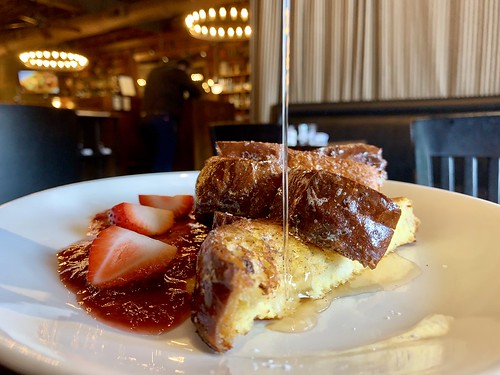 The French toast and the recommended corned beef hash came out last and we shared both. The French toast had the same fluffy texture as the ricotta doughnuts and the sweet strawberry compote and maple syrup on the side were delicious accompaniments. 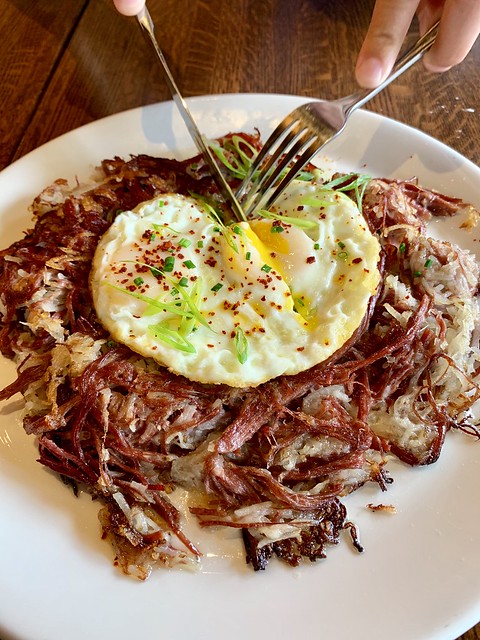 While the corned beef hash didn’t necessarily look like a work of art, it tasted like a masterpiece. The shredded brisket had been braised for six hours with potatoes and onions making it just melt in our mouths. It was served atop sauerkraut with horseradish crème fraiche and finished with a sunny side egg, making it a hearty dish that honored our Irish roots.

Temple Bar nailed their traditional and inventive brunch dishes so it’s no wonder they have been in the Cambridge culinary scene for over 20 years!