When I got word that Tess, our amazing D.C. Baby Bitch, was going to be in the city for a weekend and wanted to grab brunch, I couldn’t have been more excited. Even though we all work together on a daily basis, she had never met a number of us New York City Bitches, including me. 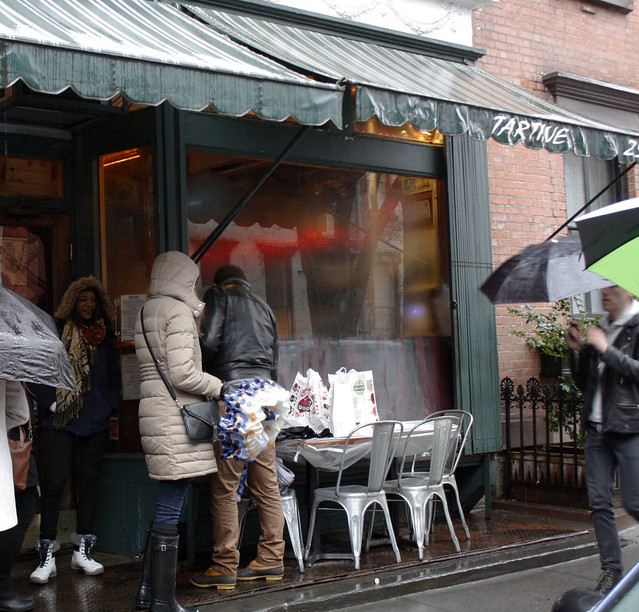 Only Britteny, our fab NYC Baby Bitch, and I were in town on this particular rainy weekend in Manhattan, but we were more than happy to meet Tess for brunch. Once we decided on a day and time, the big question arose–where should we go?

We all had a number of places on our to-brunch-list, but we decided on Tartine, a quaint French café in the West Village. I had heard great things and passed the striped green awning a number of times, but had never been. Luckily, I had read online that it was cash only, so we made sure to swing by an ATM on our way. 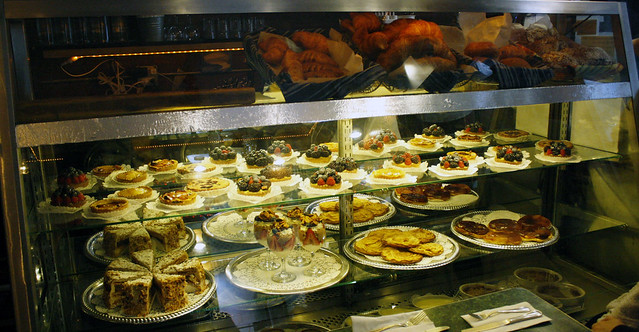 While Tartine doesn’t serve alcohol, they do have a BYOB policy. Plus, they offer a prix fixe option that can’t be beat–around $18 for a glass of orange juice, coffee, and one entree, with some upcharges here and there, depending on exactly which entree you order. We came fully prepared with a few bottles of bubbly for our group of four–this was a girl’s brunch, after all. May as well enjoy a glass— or five—of champs! We each used our glass of OJ as a mixer, and turned our champagne into mimosas. 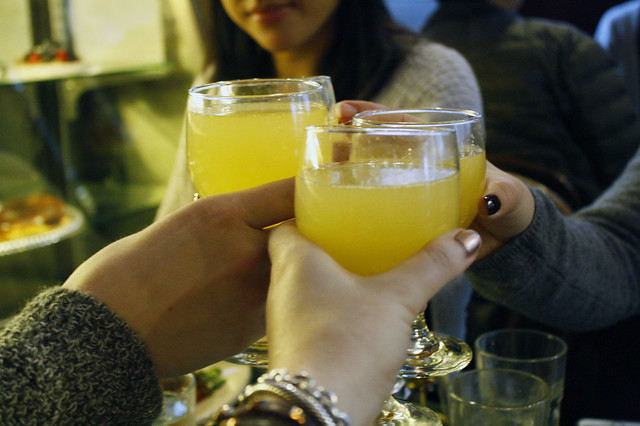 The brunch menu is more robust than you’d expect, considering how small the restaurant is–there are maybe eight or 10 tables in the entire space! I was craving smoked salmon, and decided to go with the Grey Goose-cured Scottish salmon dish. 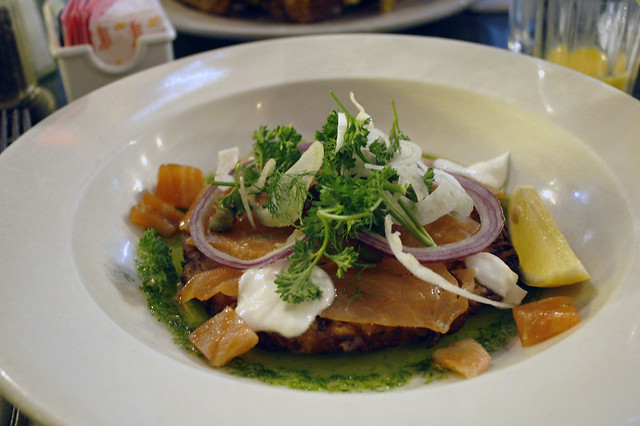 The sliced, smoked salmon was served atop  a warm potato pancake, and topped with red onions, capers, fromage blanc, plus a citrusy sauce and fresh dill. This dish was on the lighter side, and reminded me of a deconstructed lox bagel sandwich, if the bagel were replaced with a latke. But all of the flavors paired together perfectly, especially the citrus notes. 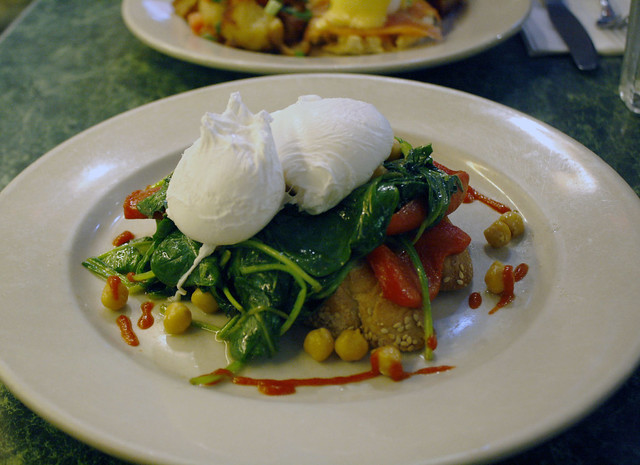 Britteny ordered the Tunisian Breakfast, which comprised two poached eggs, Semolina bread, chickpeas, wilted spinach, roasted red peppers, and Sriracha. The dish had some of Britteny’s favorite ingredients in it, but it fell somewhat short of her expectations. It wasn’t nearly as spicy as expected, and there was way too much spinach and not enough of the other ingredients. Overall, though, nothing was wrong with the dish. 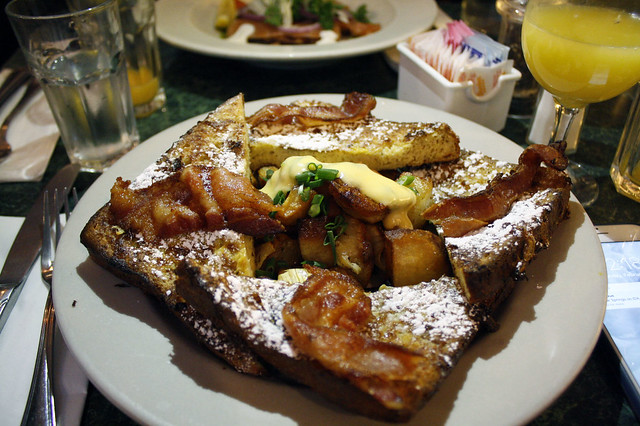 Tess ordered the French toast, which came with bacon and potatoes. The French toast was delicious–it was perfectly fried and toasty. The bacon was greasy in a good way. The potatoes were fine, but not super memorable. This is a dish you should order if you’re starving and need lots of carbs. 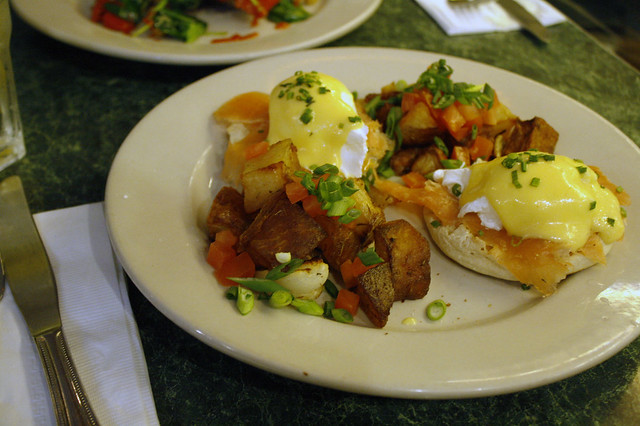 Tess’s friend, Alexis, ordered the Eggs Norvegienne, which included poached eggs, gravlax, and Hollandaise sauce atop an English muffin. Alexis says that she was full and satisfied from this meal. The dish was salty but not too salty, and it wasn’t drenched in Hollandaise so you could actually taste all of the ingredients. Her potatoes were chunky and crispy—perfectly executed breakfast potatoes.

True to its French roots, Tartine has the most adorable bakery counter where all of their fresh pastries and desserts are beautifully displayed. We all agree that we couldn’t leave without trying a homemade treat and opted to share the seasonal fresh berry tart for dessert. 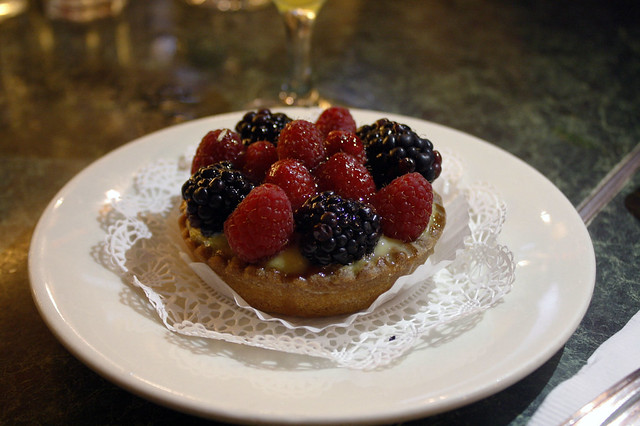 The crust of the tart was thicker and more shortbread-like than we were anticipating, but the berries were plump, sweet, and fresh, while the custard was slightly tart and perfectly creamy. While it was very pretty, the taste was underwhelming. 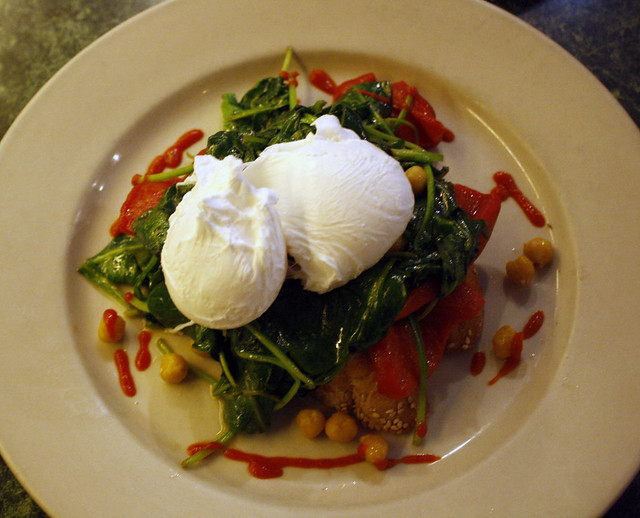 Our dessert got mixed reviews, so we debated sharing another. It was around that time our server came by to ask if we were done with our meal. We explained we were trying to determine if we wanted round two of dessert. She then proceeded to point to the line forming outside, asked if we had noticed there was a wait, then requested we “hurry and make a decision” so they could turn the table.

(We’ll add that our previous waiter was incredibly nice and helpful. Props to you, sir!)

The four of us looked at each other, flabbergasted, that we were essentially being made to rush out of the restaurant, rather than being encouraged to stay and spend more money on extra desserts and coffee. They then brought over our remaining bottles of champagne, as well as our check, without checking again to see if we wanted more baked goods. Maybe our server was just having a bad day, or maybe she was stressed, but whatever the reason–it left a sour note on what was originally a very enjoyable, tasty brunch.

The Bitches say: Three Flutes. If it weren’t for the terrible service towards the end of our meal, the quality of the food and the BYOB would have earned Tartine a B+. But unfortunately, the poor customer service totally soured our overall experience.