Sunday in Brooklyn had been on the top of my brunch “must list” since it opened last October. Knowing there would definitely be a wait if we just walked in on your average weekend, my friends and I made reservations a few weeks in advance. 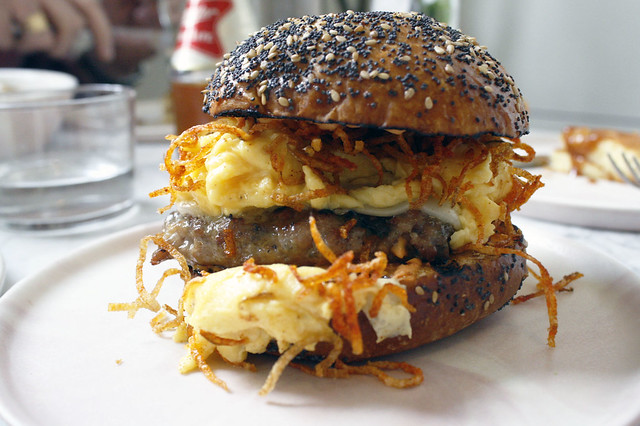 With a combination of exposed wood and whitewashed wood walls, the three-story restaurant has an industrial, yet light and airy feel. It’s almost as if you walked into your hip friend’s Williamsburg pad who has eccentric taste–and they just happened to have a ton of friends over. 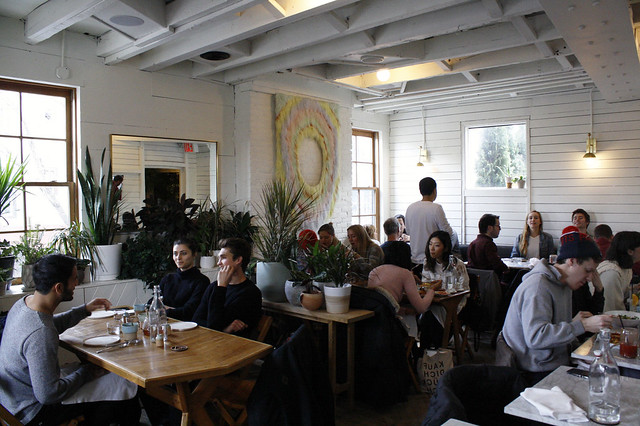 The place was packed; even with a reservation, we had to wait a few minutes to be seated and had to make our way through mobs of people to get to our table.

Always a sucker for a good Bloody, Mike and I ordered the Sunday, Bloody Sunday. Made with mezcal, a housemade Bloody Mary mix, sambal, and topped with pickled veggies, this was one killer cocktail. There was almost too much horseradish and what seemed like hot pepper seeds and skins which kept getting stuck in the straw, making it difficult to take big sips of the cocktail. But they definitely added to the overall flavor, so it wasn’t in vain. 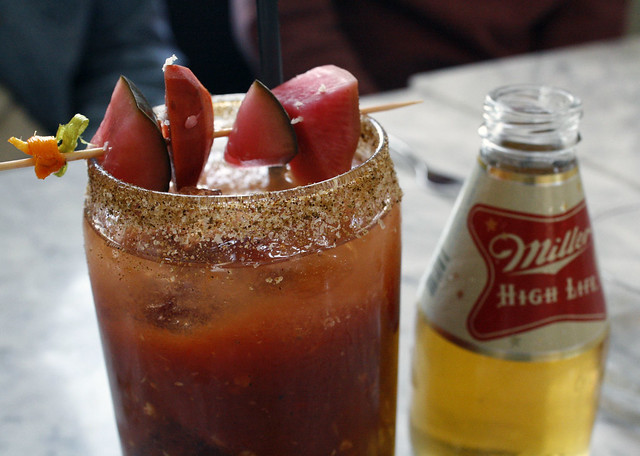 By the time we reached the bottom of our glass, we both had runny noses from the spices. While I enjoyed the flavorful concoction, it isn’t one of those Bloodys I would order more than one round of. We both opted to add on a High Life nip to our order for $2 more; this helped balance out the spice and was a refreshing complement. 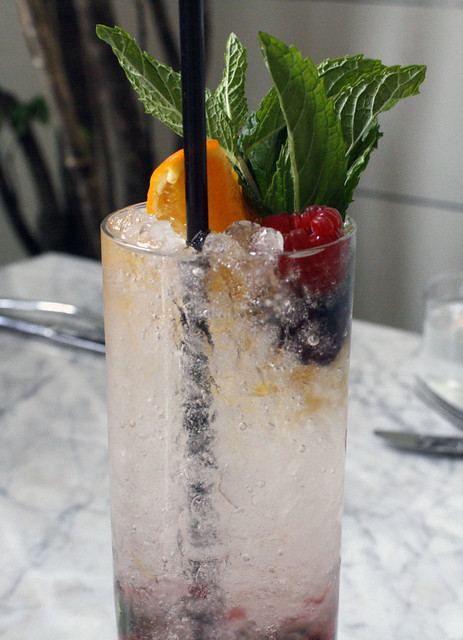 Shannon was in the mood for bubbly and opted for the Champagne Problems. Champs, orange juice, and mint were muddled with berries and served over ice. This bevvy was incredibly refreshing, not too sweet, and slightly tart. The perfect cocktail for a Saturday brunch! 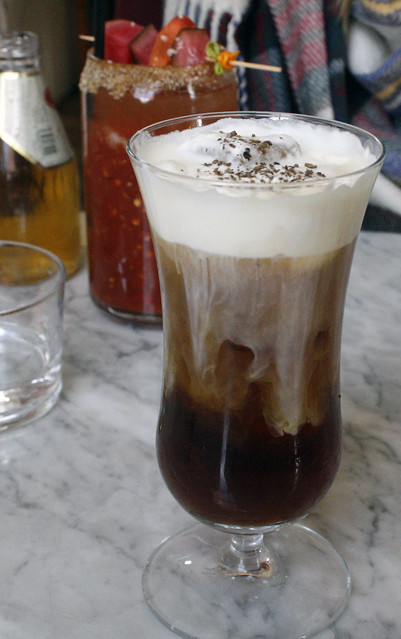 The Sundae Coffee caught John’s eye, as he was in need of some caffeine. Cold brewed coffee was mixed with aged rum and allspice dram, then topped with a healthy dollop of vanilla cream. This boozy coffee did just the trick–and it was so good that John opted for a second Sundae. 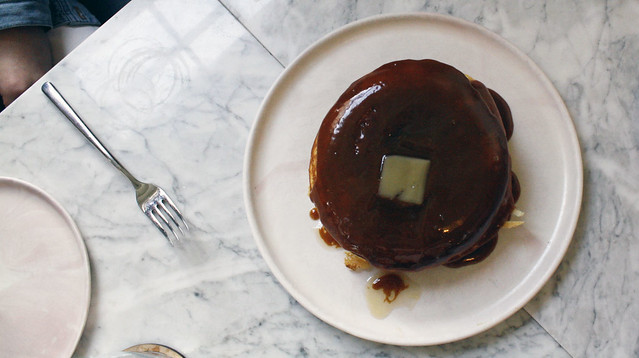 As we sipped on our cocktails, we scanned the menu and were tempted by a few of the pastries like the maple cheddar biscuit and the pecan sticky bun. But after seeing the malted pancakes all over Instagram–plus hearing rave reviews from Annie, one of our D.C. Bitches–I insisted we order those as our sweet dish to share. 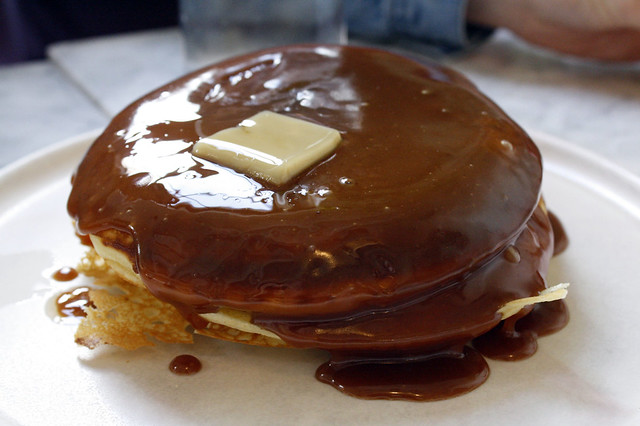 Just. Look. At. These. Pancakes. Served with a slice of brown butter on top, these flapjacks were fluffy and scoured in a slightly sweet, malted sauce, rather than your typical syrup. This dish was interesting, but in the best way. If you go to brunch at Sunday in Brooklyn and skip out on trying these pancakes, this Bitch will be disappointed in you. 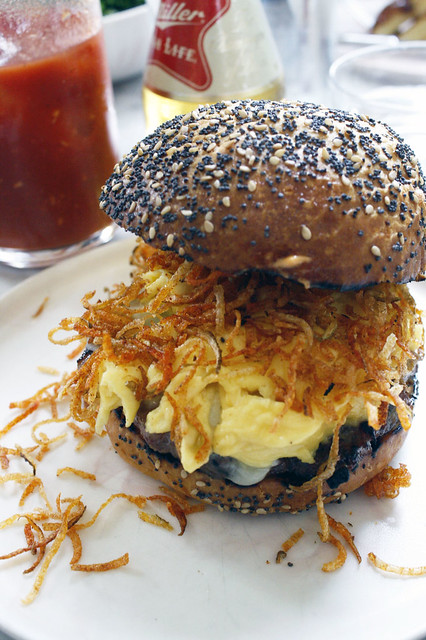 As far as entrees go, I was eyeing the spicy roast beef sandwich, but they were unfortunately sold out for the day. Shannon and I both went with my backup: the egg and sausage sandwich, topped with razor thin, crispy potatoes and Gochujang aioli, all squeezed into a brioche bun.

This was a near-perfect breakfast sandwich, in my opinion. The sausage was juicy, the eggs were perfectly cooked, the brioche was fresh, and the crispy potatoes added that needed crunch. I just wished there had been a tad more aioli. 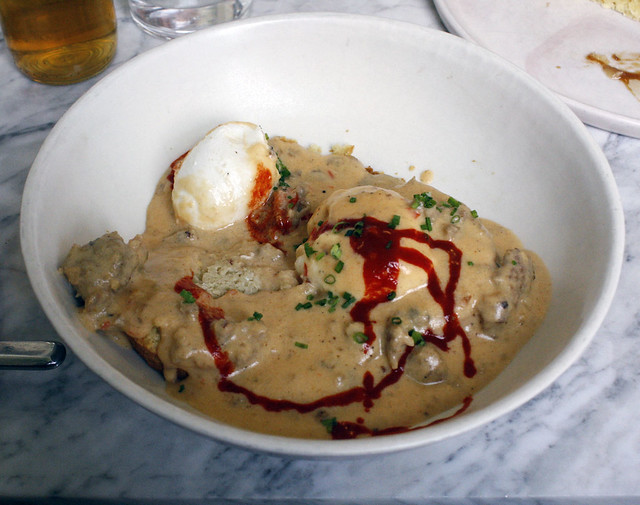 Mike had his sights set on the biscuits and gravy. This dish is only served during weekend brunch, so if this Southern staple is your thing, you can’t NOT order it! Homemade biscuits were topped with breakfast sausage gravy, hot sauce, and a poached egg. While this wasn’t the prettiest dish we’d ever seen, all that matters is how it tastes. And according to Mike, it tasted fantastic. 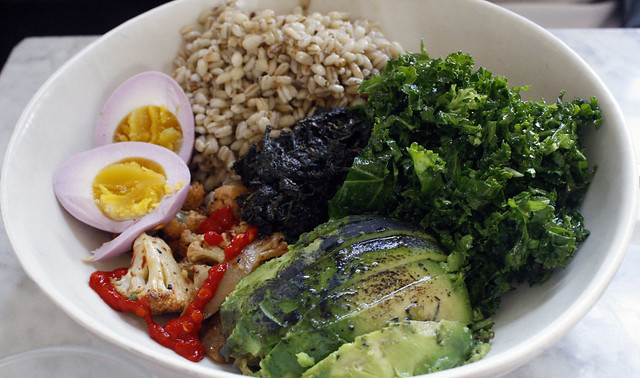 The “healthy” one at the table, John ordered the grain bowl which consisted of toasted barley, cauliflower, spicy kale, a hard-boiled egg, avocado, and sambal. The bowl looked beautiful–almost too pretty to eat–but John dove right in. 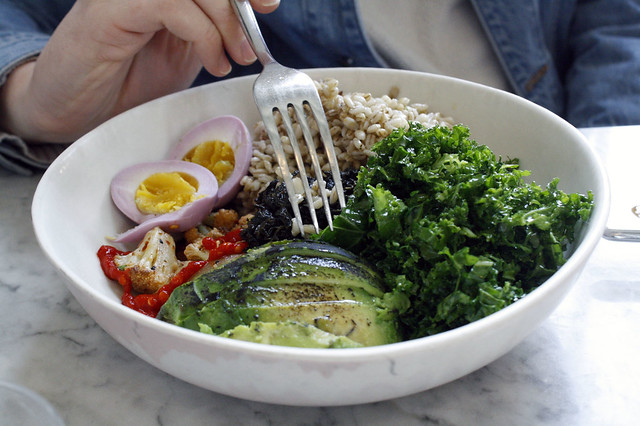 At first bite, he remarked “I’m not sure I ordered the right thing,” second guessing his choice. It seemed like this wasn’t any better than your average grain bowl. But after a few more bites, he changed his mind–this was definitely a few steps above just any healthy bowl. 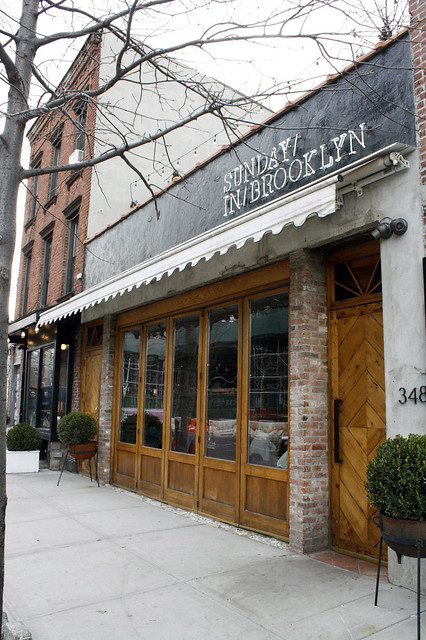 Once we wrapped up our meal, we left feeling full and satisfied, making our way to another Williamsburg establishment for a post-brunch beverage. I don’t know about the rest of my friends, but I went to bed that night with visions of our brunch dancing in my head.

The Bitches say: Five flutes. Spend your next Sunday (or Saturday…or any day) at Sunday in Brooklyn. If you don’t order the malted pancakes, you’re seriously missing out.