I don’t typically take myself too seriously here, but I’m about to let you in on a serious secret that is Stanton & Greene, a new craft cocktail bar in Capitol Hill. My husband and I had an experience on Friday night unlike any other date night.

It was a cold weeknight between Christmas and New Year’s, and the city was virtually a ghost town—just the way we like it. We stepped into the amber-lit Stanton & Greene and were immediately transported to a different era, thanks to the retro decor and the Etta James soundtrack. A couple was quietly enjoying cocktails in a cozy booth while Remy, the mastermind mixologist, greeted us from behind the bar. 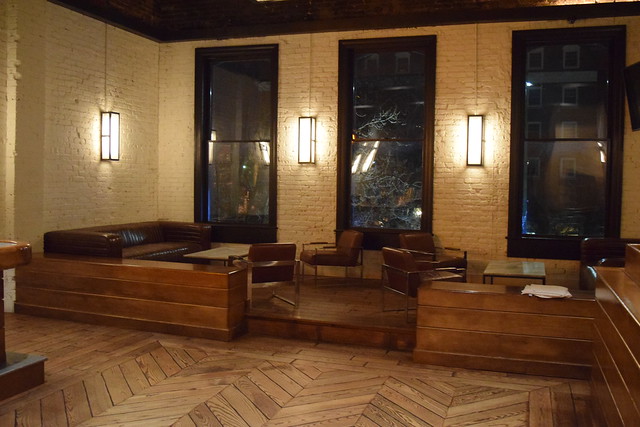 The Movers and Shakers

Before jumping into the cocktail menu, Remy gave us a tour of the space, which is a stunning second level with white washed brick walls, leather couches, and a gorgeous white marble bar adorned with Edison light bulbs. My wheels were spinning, as I tried to dream up events I could plan as an excuse to cocktail in this space. His enthusiasm for the details in the decor—like copies of the Declaration of Independence—was our first taste of his passion for his craft.

Despite Remy’s classical music background, there is no theater to the cocktails at Stanton & Greene. Nothing is lit on fire, there’s no dry ice. In fact, it’s a menu you can understand— there’s really nothing you haven’t heard of or can’t pronounce. What impresses us is the layers of flavors, and innovative methods for heightening all of your senses as you experience each drink. It’s familiar, but unique. 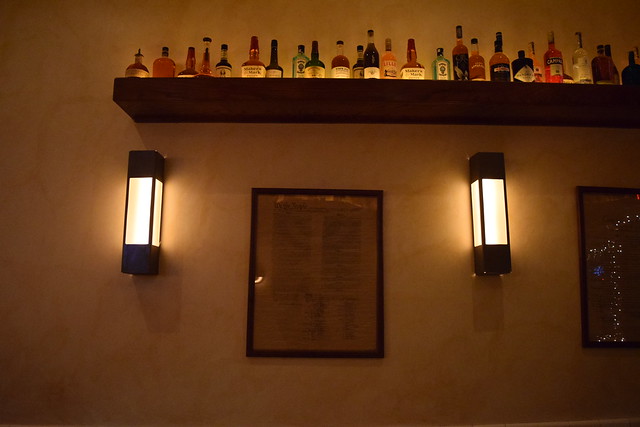 Before you roll your eyes and dismiss this as another played out concept that D.C. restaurateurs so desperately grasp onto, let me assure you, as resident Washingtonians for a combined ten years (and a former New Yorker) we could not be more turned off from said concepts. But this was different. There was an authenticity, a sexy appeal, an undeniable interest and art to the craft.

An opera singer, marketer, and mixologist, Remy clearly doesn’t waste time. So, we jumped right into the cocktail menu, starting with two historical recipes, which he found after researching in the Library of Congress. Benjamin Franklin’s clarified milk punch was crisp and refreshing, topped with a lemon peel and nutmeg. The Martha Washington’s Cherry Bounce was made with Brandy and Morello Cherry. It was a thicker consistency, but not bitter at all and surprisingly smooth. 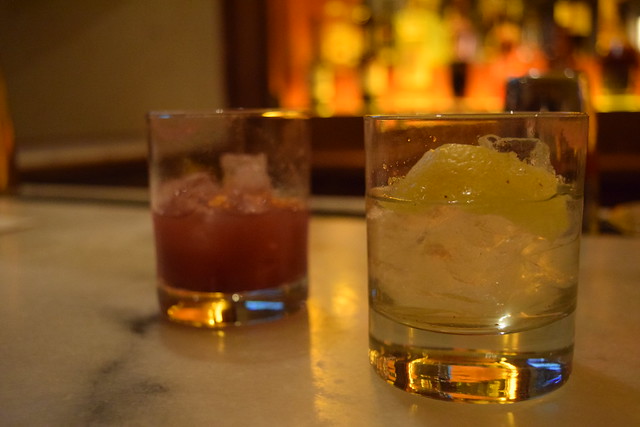 As homage to the neighborhood, the entire cocktail menu is inspired by the Bill of Rights. Not only did Remy memorize each amendment, thanks to hours of researching, he used them to concoct ingredients that make up each unique cocktail. His methodical approach includes making his own caramel that harmonizes with Applejack in the “Home Sweet Home” and sitting down with local artisans, like Calabash Tea & Tonic owner, to choose the exact version of blood orange ginger tea to incorporate into “The District,”  my favorite cocktail on the menu, which is sourced with all local ingredients, down to the honey produced in Reston, VA. 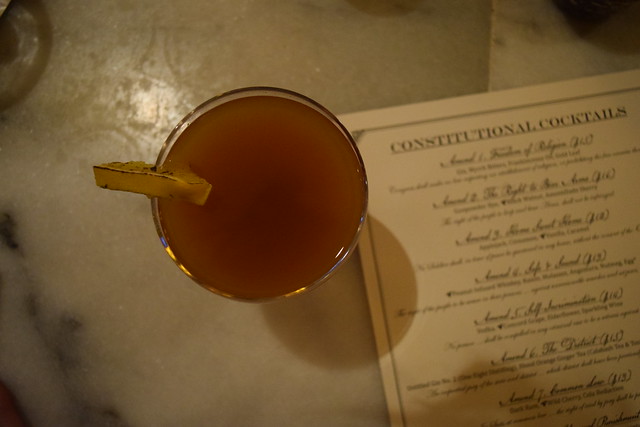 The first amendment, The Freedom of Religion, was made with gin, Myrrh bitters, Frankincense oil and gold flakes, as a nod to the biblical wise man gifts. Remy used stickers as a medium to deliver the Frankincense scent into the cocktail, an oil that doesn’t taste that good, but smells great. Chefs have been incorporating the scent tactic into their craft for some time, but we’ve yet to see a mixologist embrace the concept by using a sticker. It makes sense Remy would be one of the first because he “has an aversion to doing things that anyone else is doing.” We were off to a strong start and as a gin drinker I enjoyed it, but, like religion, it was not for everyone.

The Right to Bear Arms, otherwise known as the second amendment, used Gunpowder rye, a Maryland style rye with chocolate and coffee notes. The black walnut, which is native to North America, gave a nuttiness to the drink. It was smooth and we were encouraged to sip it before it was watered down by the ice. 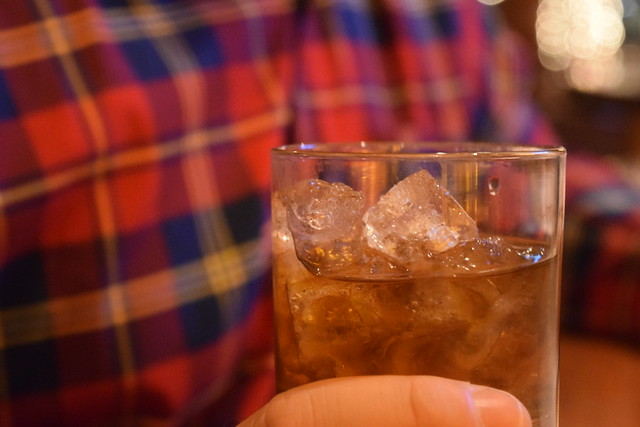 Perhaps one of the most impressive cocktails of the night was the Home Sweet Home, or the third amendment which states “No Soldier shall, in time of peace be quartered in any house, without the consent of the Owner.” Remy’s interpretation was reminiscent of an American home, and what’s more American than Apple Pie? Using Applejack, from the nation’s oldest distillery located in New Jersey, he crafted the smoothest apple cocktail, complete with his homemade caramel and dried apple slices. When I’m having a lazy day, I’m going to think of how Remy is an opera singer, makes caramel, and conceptualizes Constitutional cocktails, in between trips to the Library of Congress. Somebody get this guy his own bumper sticker. 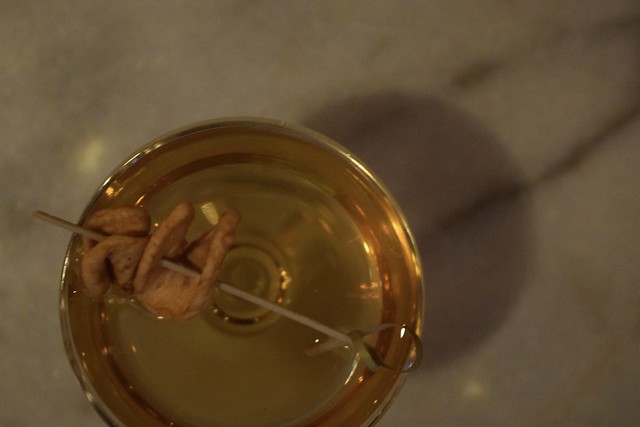 It was hard to pick a favorite, but the trifecta of whiskey, IPA, and Jalapeño Hops in the Cruel and Unusual Punishment spoke to me. The clean Jalapeño spice and layers of lemon were incredible and unlike any other cocktail on the menu. 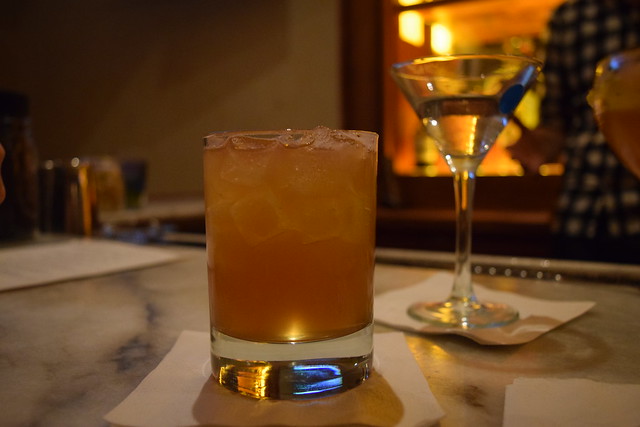 The fifth amendment, Self-Incrimination, is a crowd-pleaser with a great story. He wanted to come up with a red drink, to illicit sin and crime, but also use an ingredient indigenous to the U.S. like the concord grape, plus didn’t we all grow up drinking Welch’s? It was effervescent and feminine thanks to the sparkling wine, elderflower, and gorgeous coupe cocktail glass. It was topped with deliciously sweet candied grapes, which Remy whipped up himself. 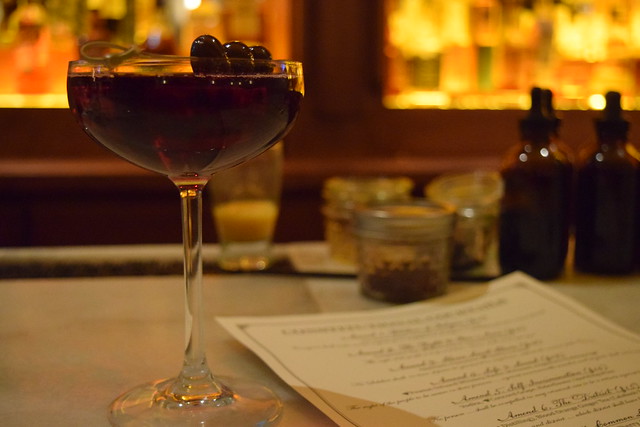 Whether you’re looking to brush up on your American history or your date, run don’t walk to Stanton & Greene for some of the best craft cocktails in town. It may have been empty the night we visited, but it won’t be for long.