Will it and it’ll happen. I had just been thinking that I haven’t explored LA as much as I’ve wanted and next thing I knew, I was presented with a last minute work trip out to the City of Angels. After wrapping up my business, my boyfriend Robert and I stayed through the weekend to visit friends and eat our way across the city.

As part of my intro to LA tour, I was excited to crash with our friends Marty and Noni at their Silver Lake pad. We hit all of the requisite spots, from the Thirsty Crow to Alfred Coffee, and decided to brave the line to brunch at Sqirl, a brunch that I’ve admired from afar and had been dying to try.

We called ahead and were quoted about a twenty-minute wait, which we were quite surprised about given that it was 11 a.m. on a Saturday. Once we arrived at the adorable corner restaurant, a line was already wrapping along the block and we quickly realized that realistically it would be upwards of an hour. However, we were already mentally committed to trying out this hotspot and resolutely dug our heels in.

To its credit, Sqirl really churns out food and turns around the tables quickly, which is fortunate as seating is quite limited. It’s a tiny neighborhood spot with lots of charm. The restaurant was filled with a mix of young families and Silver Lake hipsters so with our party’s mix of man buns, skinny jeans, and retro kicks, we fit right in. 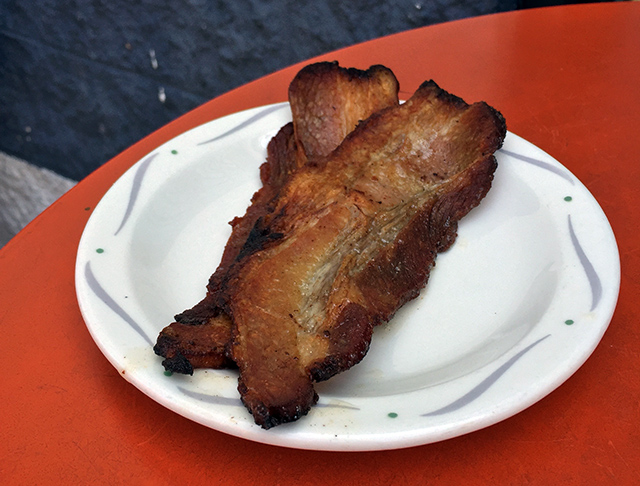 The four of us strategized as we studied the menu, aiming to try a diverse assortment of menu items. Sqirl is known for its baked goods, toast specifically, so we agreed that a few toast variations were in order. 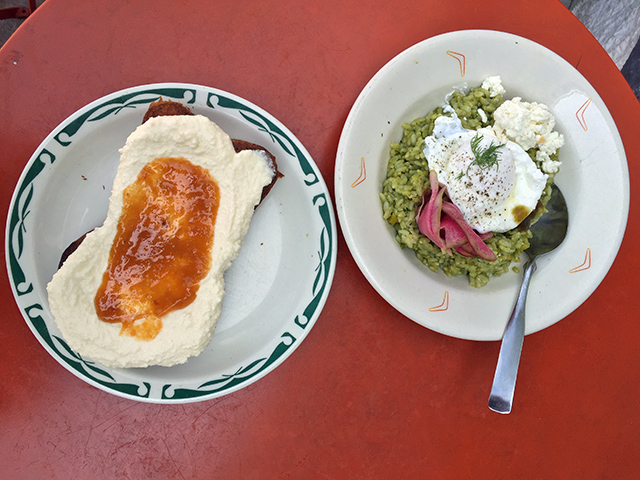 First up was the “famed” ricotta toast, which features burnt brioche toast, house ricotta, and a choice of seasonal jam—we went apricot. This is was worthy of the hype. We all agreed that this may be some of the best bread we’ve tasted in recent memory; it was thick cut, and perfectly soft in the middle with a crispy crust. I loved the contrast between the light savory ricotta and the sticky sweet jam. Noni and Marty even bought a few of the jams to have at their new home. 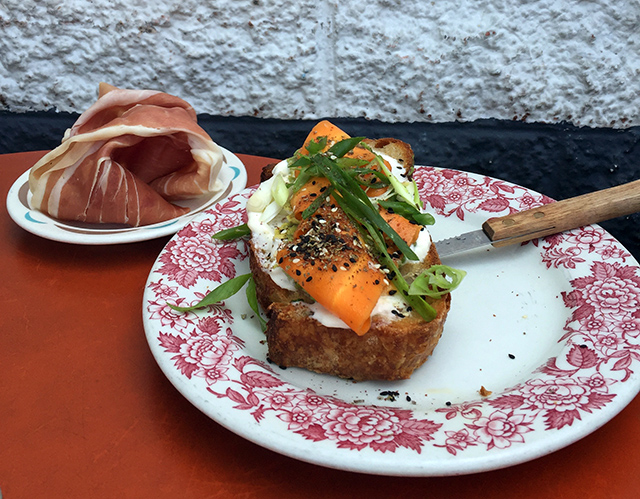 Noni ordered the avocado toast, which looked totally different than your typical basic avo toasts. This version was stacked high with veggies and garnished with unique toppings like green garlic crème fraiche and house za’atar. The house pickled carrots really brought the avocado toast to the next level and it was bursting with flavor and texture. 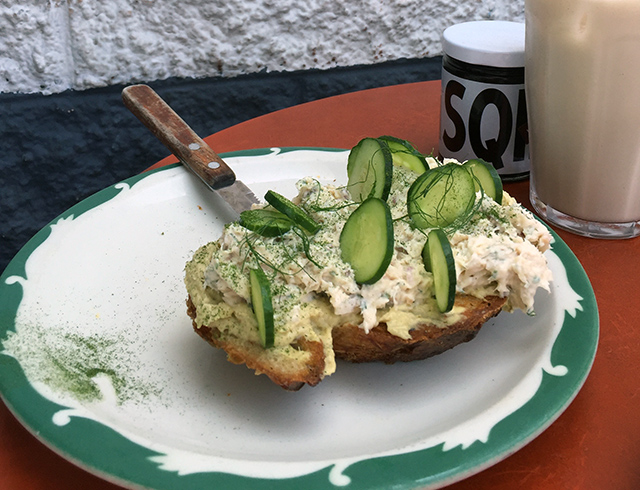 Marty remarked that he’s a sucker for any kind of breakfast fish like lox so the white fish tartine was his top choice on the menu. This opened face Sammy was topped with a carrot cumin mash, taco stand pickles, and fresh herbs. Although this looks like a smattering of foodie buzzwords, the dish stood for itself and he easily polished it off quickly. He appreciated the generous serving of fresh fish and the briny crunch of the pickles. 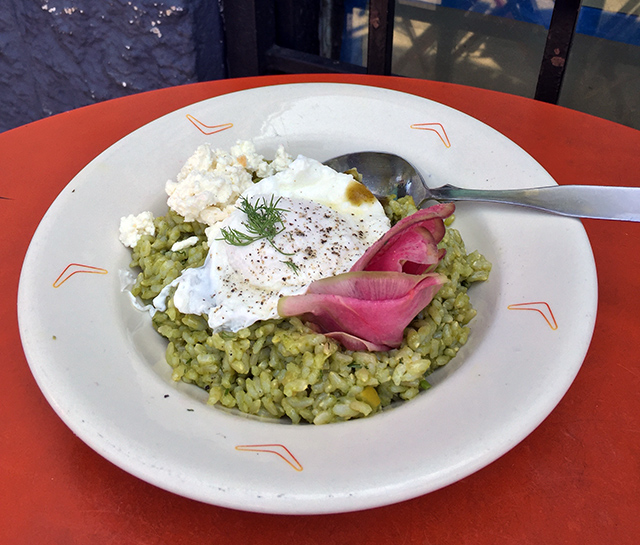 Besides the ricotta toast, Robert and I also split the Sorrel pesto rice bowl, a unique dish that I’ve never seen on a brunch menu. I normally wouldn’t order a rice bowl this early in the morning, but was swayed by stellar reviews for this dish. With additions like lacto-fermented hot sauce, French sheep feta, and Kokuko rose brown rice, we joked that this dish was “so LA.”

Cliché or not, this entrée was flavorful, interesting, and satisfying. The hint of citrus from the preserved Meyer lemon was genius and the inclusion of a poached egg kept it breakfasty. I found it a little salty, which I blamed on the pesto, but I can be sensitive to salt and Robert had no qualms with the sodium levels. 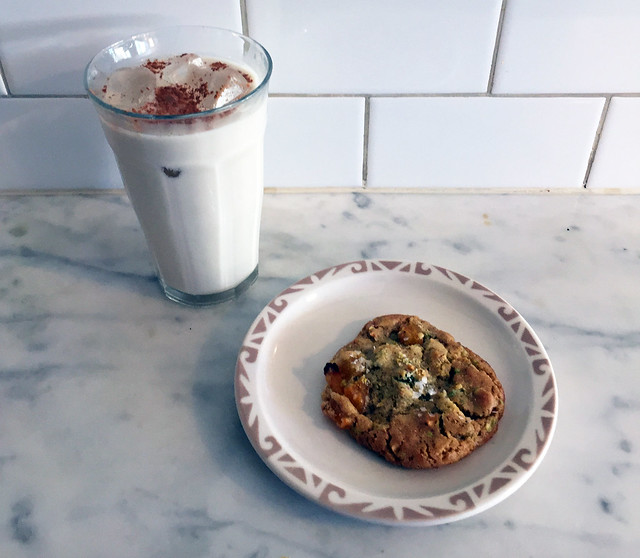 We also snagged a few cookies as a treat for braving the line, as well as a glass of vegan horchata to wash it all down. Noni and Marty opted for the classic chocolate chip with sea salt, while we tried the California cookie with local figs. Both cookies were deliciously chewy and obviously contained high quality ingredients. I commandeered the horchata, which was smooth and spicy. Combined with the gourmet baked goods, this felt like a fancy, adult version of cookies and milk. It was the perfect way to conclude our brunch on a sweet note.

The Bitches say: A. Brave the line at this funky LA eatery and get ready to carboload on some of the best toast on the Left Coast. Take the LA-isms with a grain of salt and be prepared to see and be seen at this buzzy local restaurant.

Sqirl is open for brunch on Saturdays and Sundays from 8 a.m. until 4 p.m.