Summer has, sadly, come to an end here in Chicago. Most Chicagoans are sad to see summer go and are prepared for the inevitably short fall season, followed by our notoriously harsh winters.

But, when there is a sudden and unexpected surge in the temperatures, which was the case last weekend, you can bet that locals are going to do everything they can to take advantage of the unseasonably nice weather, myself included.

I had packed away my summer clothes the previous weekend and was fully prepared to step out of the house in my favorite fall booties, but once I heard that the weather would be in the high 90s, I set aside a cute summer dress and arranged for Svetlana and I to brunch at the new Shore Club on North Avenue Beach.

I went to the opening media party for Shore Club a few weeks before to celebrate the restaurant finally being open to the public. Shore Club is an upscale bar and restaurant that is unparalleled to other beachfront dining in Chicago, so to speak.

Located right on North Avenue Beach facing Lake Michigan, Shore Club is a stone’s throw away from the popular summer party spot, Castaways, but it is a completely different experience.

I must say, I was surprised when the anticipated Shore Club finally opened in the middle of August: summer is pretty much over in August by Chicago standards. Still, the proposed private beach club with stunning views of Lake Michigan was an exciting place to check out, nonetheless.

After attending the opening party, I was anxiously awaiting the debut of brunch, and when it finally arrived I wanted to make sure I went one of the first weekends. So, on a gorgeous Sunday, Svetlana and headed to the beach! 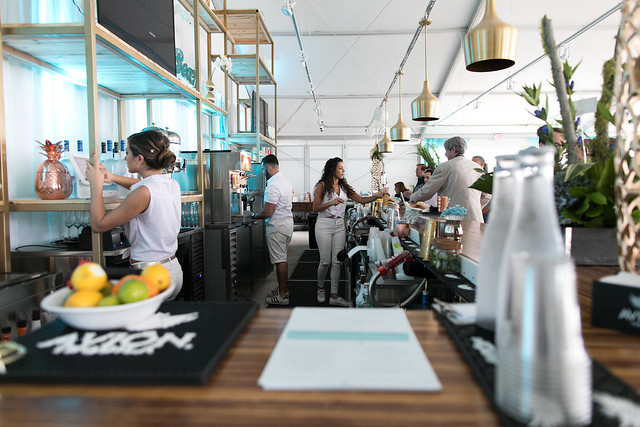 We arrived at Shore Club around 11 a.m. and while the restaurant wasn’t packed, there was a good number of people enjoying the gorgeous weather over brunch or cocktails. Shore Club’s décor is cute, but kitschy; it is trying to be a Miami South Beach club in the middle of North Avenue Beach.

Long curtains, gold pineapple accents, and picnic tables occupy the restaurant proper. Outside there is an outdoor bar to the right, and on the sandy beach to the left is a full beach area, complete with private cabanas and gazebos, giant checkers and cornhole, and bottle service, of course. 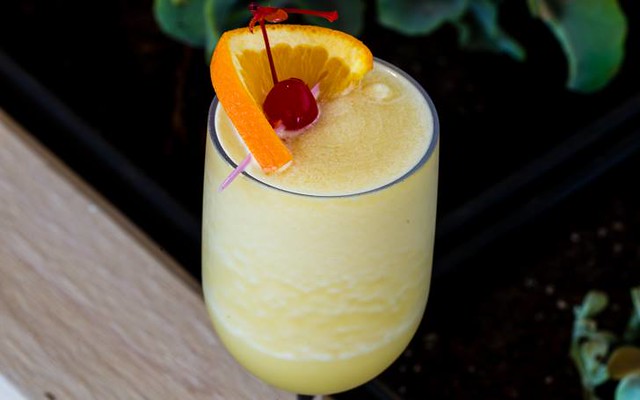 While it exudes a vibe promoting exclusivity and an upscale dining experience, Shore Club is just another beachfront restaurant, with some signature elements, and over-priced food and drinks.

I will say that Shore Club is not as expensive as I had anticipated, considering the restaurant’s location and unique dining experience, but the food was still pricey regardless. We ordered signature drinks, which were tropical and light; the perfect summer cool-off libations.

Now on to the food. Svetlana and I were in a sharing mood, and since she is mainly a vegetarian/pescatarian, I was excited that the majority of the items on the menu fit both of our respective dietary restrictions. Additionally, I had the jackfruit BBQ sandwiches at the opening party and raved to Svetlana about them. 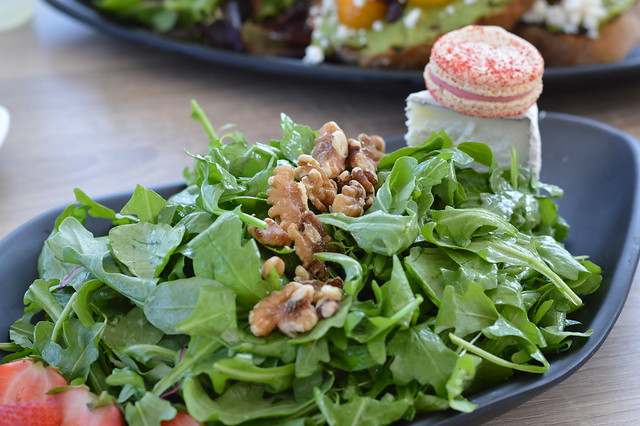 We started with a Strawberry Macaron Salad, which was salad of spinach and fresh berries that came with a wedge of Humboldt Fog cheese topped, interestingly enough, with a strawberry macaron on top. It was strange; the macaron was cold and chewy, unlike a nice light French macaron. The cheese was delicious (it is one of my favorites) but the salad was less than mediocre, and the dessert addition was just weird. 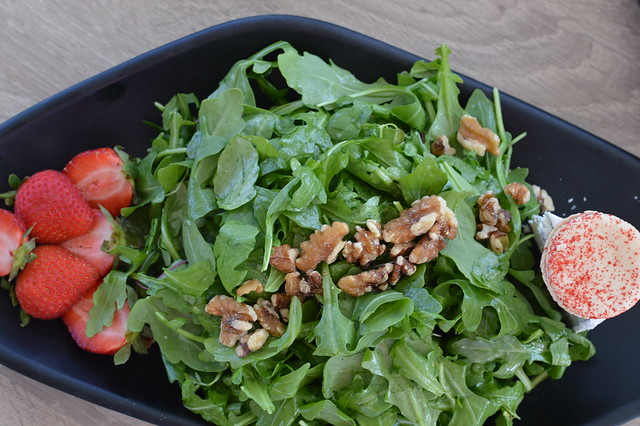 It was merely spinach and fresh strawberries with a dressing that tasted like any you could find at the grocery story. We ate it regardless, because spinach and strawberries are still yummy. 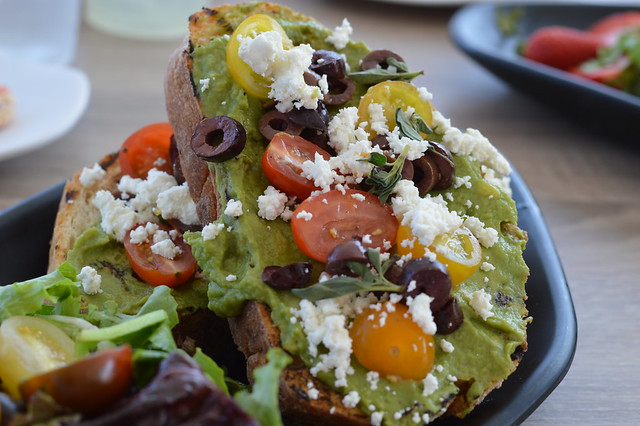 Additionally, we ordered the avocado toast. While Svetlana doesn’t get too excited about avo toast, I am always looking to try one on the menu if it’s different than ones I am used to. This one was topped with tomatoes, olives and feta cheese, and I really enjoyed it.

The olives added a salty flavor to the creamy avocado and was a perfect complement to the sharp feta. It was pretty unique and complex for an overpriced avocado toast, so it was worth the extra few bucks to me. 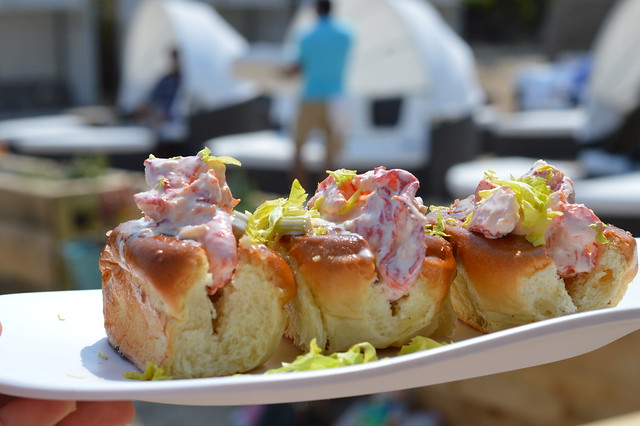 The lobster rolls were delicious, despite my initial hesitation. When they arrived on the plate and looked super small, I was worried that they most certainly weren’t worth the $24. Considering, though, that lobster rolls are always quite pricey, I will admit that these were not as underwhelming as I had assumed.

Although the lobster and sauce had been pre-mixed, unlike a normal lobster roll where the chunks of meat are scooped into the roll and then topped with sauce, they were still filling and I didn’t feel as if the cream-to-meat ratio was off.

They were creamy and packed with lobster, and the rolls were buttery. I only wished that the rolls had been warmed or toasted before the lobster mixture was stuffed in them. As the breeze from the lake rolled through the window, and seagulls chirped in the distance, for a brief moment I felt as if I were on the shores of Maine. 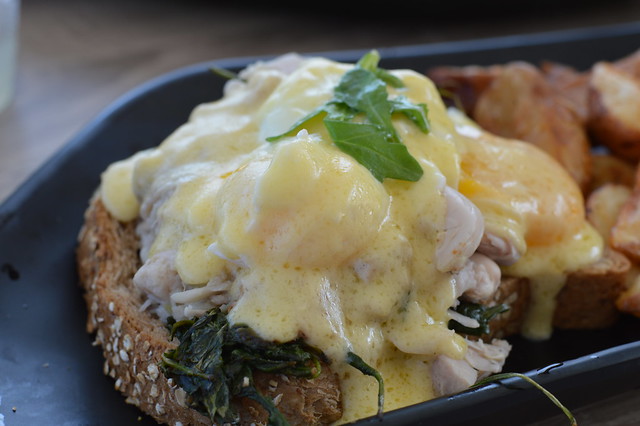 Our final dish was the jackfruit eggs Benedict, and I wish I had good things to say about it, but I don’t. We should have gone with our instincts and just ordered both the lobster and the BBQ jackfruit rolls, but we wanted to try something new.

Something you notice about the restaurant early on is how fast the food comes out. At times during our meal, food came faster than our drinks, despite how much earlier we ordered our libations. One can only assume the majority of the food is prepped way ahead of time, because despite how big the restaurant is, the space seems as if it is lacking a large kitchen area.

For our previous dishes, this was not an issue; everything was served cold so we really didn’t mind it. That was, until the Benedict arrived to the table. The presentation was sloppy at first glance, and we noticed how lackluster the dish looked. Not one to judge a book by its cover, we decided to try it and then pass a final judgement.

Unfortunately, the dish tasted about as good as it looked. The eggs were gross; while poached, they were still under cooked, with the whites of the eggs still runny. The Hollandaise sauce was greasy, it lacked flavor, and like the eggs, it was barely even lukewarm.

The jackfruit was underwhelming as well. Unlike the BBQ rolls where the jackfruit provided meatiness to an otherwise flavorful item, here it was flavorless and moist, not as condensed as I would have liked. All around the dish was an unappetizing mess. 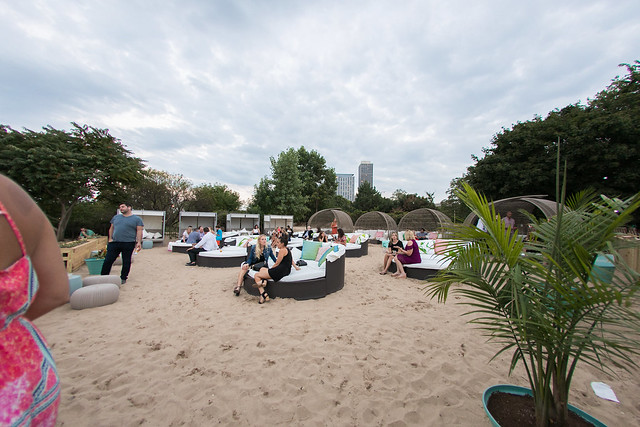 Going to Shore Club, I would assume one would know what to expect. Not the best dining, overpriced food and beverages, but still the amazing view and atmosphere is what you are ultimately paying for. Brunch, though pricey, is not terrible.

I would definitely recommend this as a nice place for a bachelorette or birthday brunch in the summer. It is a perfect place to celebrate special occasions with friends and enjoy the awesome atmosphere it provides.

The Bitches Say: C+. Come for a getaway from the crowded beaches of North Avenue, and stay for the drinks and fun atmosphere. The food is overpriced, but you are paying for a good time.