It was my first time to Portland this holiday break and I was forewarned to bring my appetite. That was definitely some sound advice as Portland is a gastronomist’s dream; acclaimed restaurants topped my ambitious to-do list.

I of course did my due diligence and researched the top brunch locales, as a Bitch is always on the clock. Across the board, Screen Door on the east side of town was named one of the best brunch spots in Rose City. 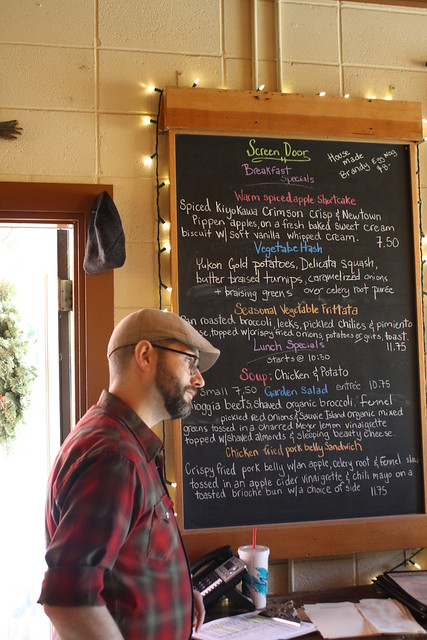 With an impressive “best brunch” title usually comes a wait, typically about 90 minutes or so during prime time at Screen Door. I was joined by my boyfriend Robert, his sister Jess and her boyfriend Paul, and Robert and Jess’ parents and we were all pleasantly surprised by our estimated 45 minute wait time. As a caveat, this was a weekday right before New Year’s, but we all happily killed some time sipping on some great Portland java at the coffee shop next door. 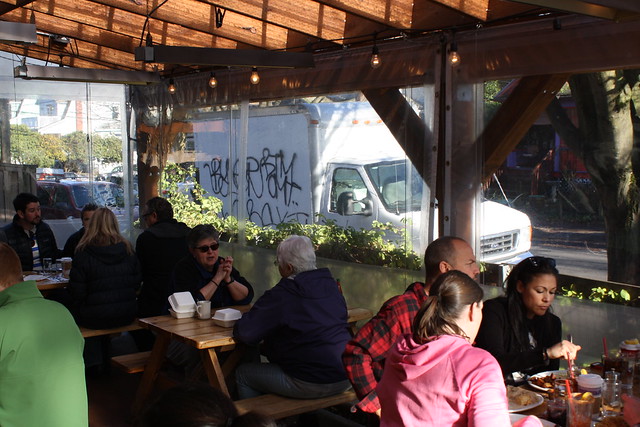 Once our name was called, we were lead through the warm, cheery dining room to the covered back patio. It was great to get some sunshine, although it was a bit drafty at times–it was December in the Pacific Northwest after all. The entire ambiance at Screen Door was inviting and jovial, which aligned well with the Southern charm featured on the hearty menu. 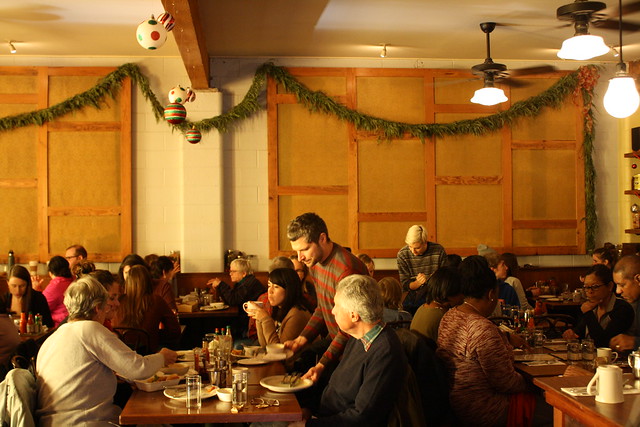 Screen Door’s menu is decidedly Southern with items such as po’ boys, grits, hushpuppies, and biscuit sandwiches. In general, I noticed Portland really has a thing with biscuits; they were everywhere. I’m not complaining. While we surveyed the expansive menu, we whet our palates with bottomless Stumptown coffee and a side of signature praline bacon. 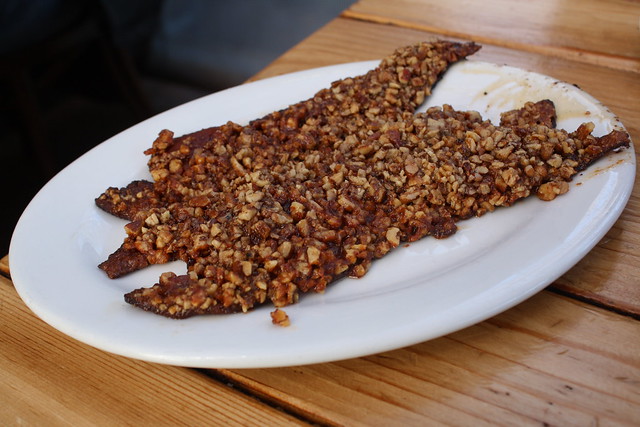 That bacon was insane…it was unlike anything I’ve ever tasted. It was the perfect balance of salty and sweet, completely smothered in caramelized goodness. It was easy to share as a group and started our meal on an excellent note. 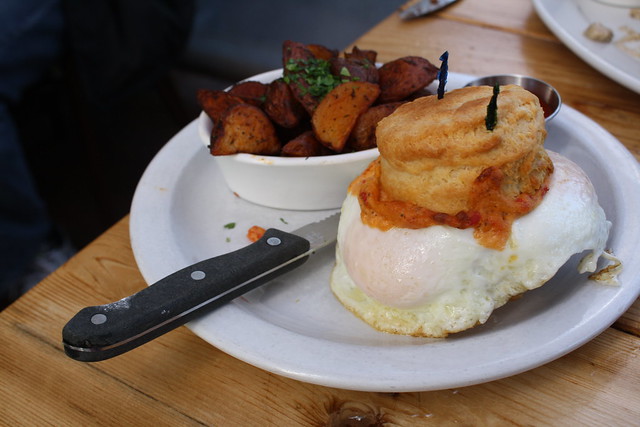 Robert and I were both eyeing the biscuits on the menu so we went halfsies on two sandwiches. I gasped when my monstrosity of a sandwich arrived to the table. I selected the pimento cheese and sausage biscuit sandwich because who can say no to pimento cheese? I could only muster about a third of this rich dish. The biscuit was perfectly flaky, the cheese gooey, and the savory housemade breakfast pork sausage was complemented by the runny egg yolk. 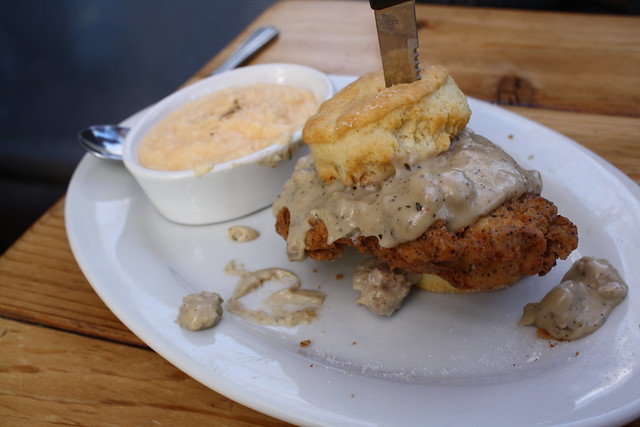 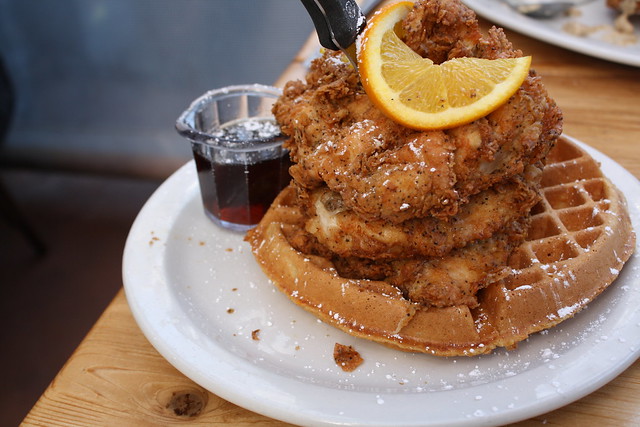 The chicken and waffles were stacked so high that they were held together by a steak knife. This dish was worthy of the hype and wait time for a table. I couldn’t get enough of the juicy fried chicken, which had a nice poultry to breading ratio, and the waffles held their own against the pool of syrup and generous pat of butter. This is a must-order at the restaurant. 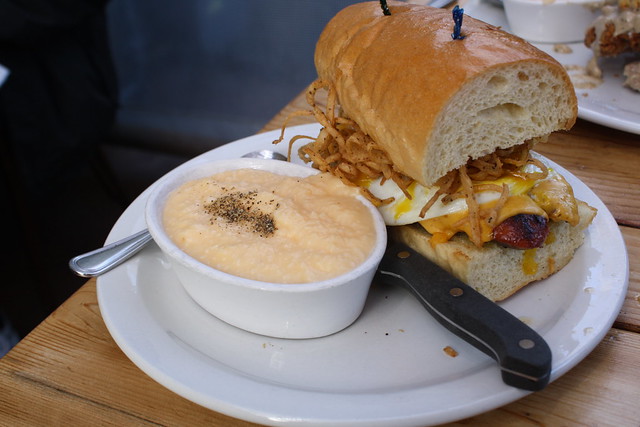 Jess went for the breakfast po’boy, which contained sausage, fried eggs, and fried onions. This was another huge portion so there was definitely enough for sharing. As a NOLA-lover, I appreciated that the bread was as it should be, crispy on the outside and soft on the inside, and the sandwich was bursting with Big Easy flavor. 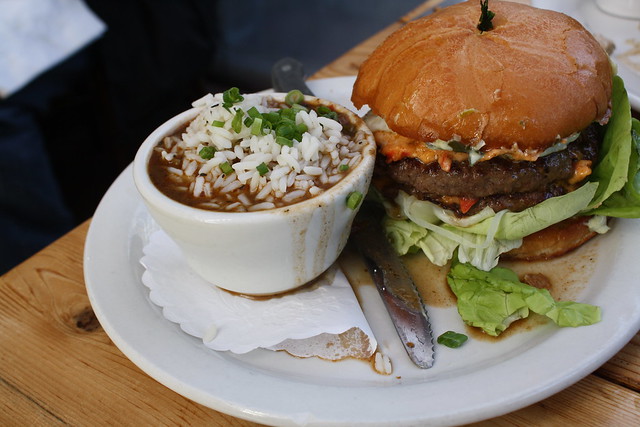 Robert’s dad, Bob, gravitated towards the lunch side of the menu and ordered the griddlestack burger. The meat was juicy and grassfed, this is Portland after all, and we appreciated the subtle twists on the classic American burger such as pimento cheese and smoked scallion mayo.

Robert’s mom was the smartest of us all and forwent from ordering an entree in anticipation that we’d have leftovers that she could munch on. She had the best of all worlds–she tried all of our dishes, but didn’t end up disgustingly full for the rest of the day like the remainder of the group. Mothers do always know best. 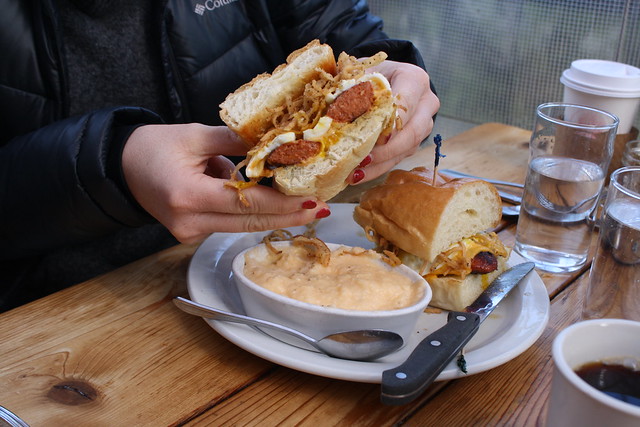 As a testament to the quality of the food and the outrageous portion sizes, we actually opted to cancel our dinner reservations before the Blazers game because we were all still stuffed from brunch. Rip City, Screen Door!

The Bitches say: A. Delicious Southern cuisine that’s worthy of the wait and the hype. Don’t sleep on the chicken and waffles.

Screen Door serves breakfast every day beginning at 8 a.m. and brunch on weekends from 9 a.m. until 2:30 p.m.