Salzburg, Austria – where the hills are alive with “The Sound of Music.” Its idyllic landscape – with the Alps to the south and rolling hills to the north – was in fact the filming location of the iconic 1965 film. Adding to its musical credentials: it was the birthplace of Mozart and is the home to a world-famous classical musical festival. But this Austrian city is also filled with delicious food, impressive architecture, and views for days. 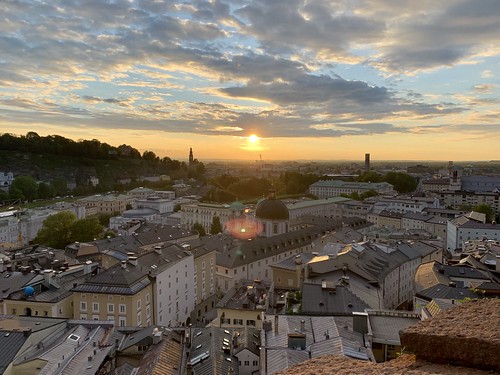 Within Austria, Vienna seems to be the most popular destination and Salzburg comes off as the forgotten middle child. But in reality, Salzburg is a breathtaking city that should not be ignored. It’s divided into a New Town and an Old Town, split by the Salzach River. 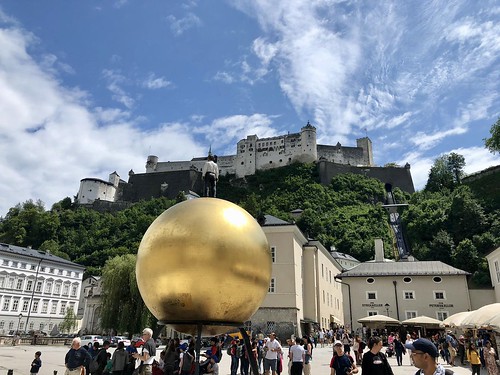 High above the Old Town sits the iconic Fortress Hohensalzburg, one of the largest medieval castles in Europe. The streets on this side buzz with activity, and I spent most of my time here along the medieval Getreidegasse Street, lined with boutiques, ornate doorways, and hidden beer gardens. 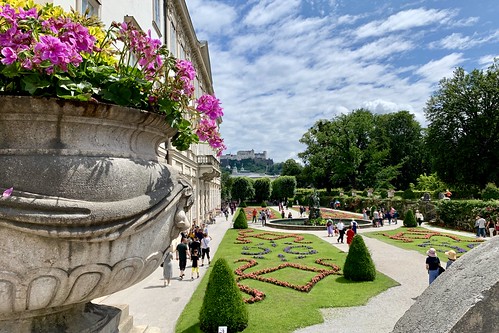 The New Town understandably has a more modern feel and my favorite attraction on that side of the river was the beautifully manicured Mirabell gardens. If you grew up watching The Sound of Music on TV on a yearly basis like many of us ’90s kids, these are the gardens that Maria and the Von Trapp children frolicked around singing “Do, Re, Mi.” 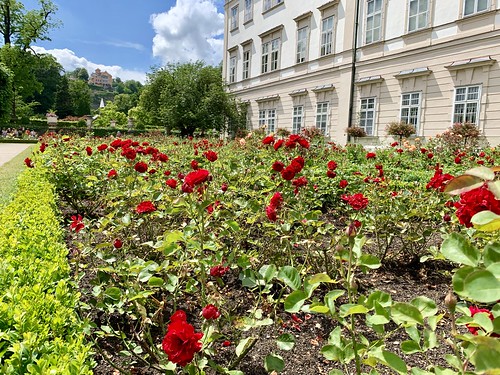 Walking between the two sides of the city was super easy and even though I have a pretty poor sense of direction, I was able to navigate without relying on Google Maps.

I visited Salzburg in late June, which – according to Rick Steves (of course) – is part of tourist season, which runs from May through September. The official language of Salzburg is German. I had some minor trouble communicating with a couple of taxi drivers and hotel staff, but I recommend downloading the TripLingo app for instant translations when you’re traveling internationally! The euro is the official currency of Austria so it’s a good idea to buy some in advance from your local bank. 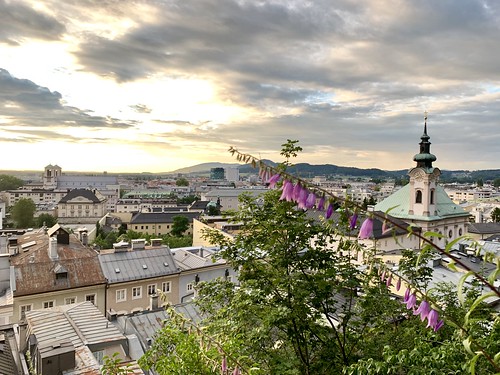 While there are no direct flights to Salzburg from anywhere in the United States, it’s just a short flight from Frankfurt, making Lufthansa the airline of choice. So get ready to score some serious Star Alliance airline points since you’ll be traveling for at least 10 and a half hours. Or if you’re part of the Oneworld alliance, British Airways is the option for you. Once you’ve landed, the city center is conveniently located about fifteen minutes from the airport, and it’s easy to find a taxi. For those who prefer ride shares, you’ll be happy to hear that UberX is available in Salzburg.

I stayed at the centrally located, reasonably priced IMLAUER Hotel Pitter Salzburg. It was recently renovated, making it feel clean and modern with much larger rooms than most European hotels. The front desk staff was friendly and wore traditional Austrian garb, which was a festive touch. With your stay, you receive access to the exclusive rooftop terrace with a bar and restaurant that have incredible panoramic views of the city, making for brag-worthy Instagram stories. They also have a fitness center that I took advantage of because running on a treadmill with a mountain view is miraculously more motivating. 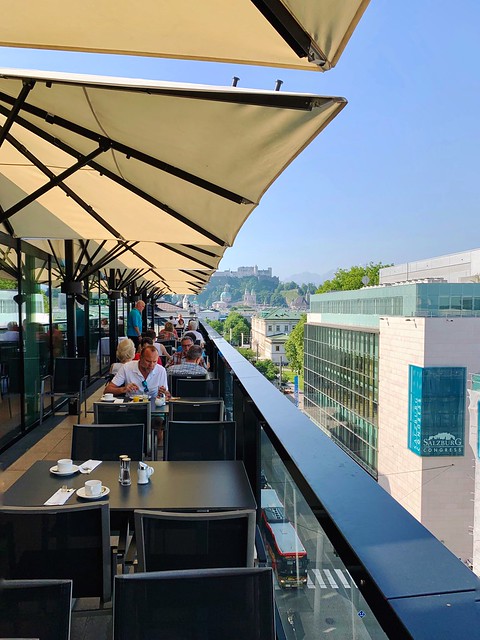 If you want to feel like a queen for a day, another hotel recommendation is the family-owned Hotel Sacher Salzburg. Its mirrored walls, chandeliers, and luxurious drapes make you feel as elegant as Kate Middleton, and to top it off it’s known for its world famous chocolate cake, the Sacher-Torte.

One of the top three restaurants I’ve ever been to in my entire life was St. Peter in the heart of the Old Town. This Michelin-star restaurant is the oldest restaurant in Europe (how crazy is that?) and set within the walls of St Peter’s Abbey. When I walked in, I felt like I was transported into a fairytale with a stone atrium open to the sky, whimsical palms, and greenery and romantic white linen table settings. 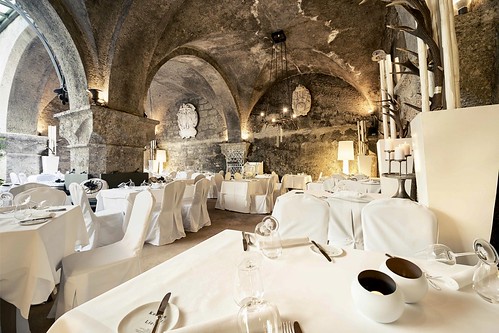 The food was upscale Austrian cuisine, and although I ventured outside of my comfort zone, it was well worth it. The foam parsnip soup with wild boar was chef-recommended, and although it sounded unusual and was served cold, it was refreshingly delicious. I’m not one to typically order venison because of its gamey taste, but the venison main course just melted in my mouth and the local wine was on point. For dessert I finished with the city’s famous light, baked soufflé called the Salzburger Nockerl. 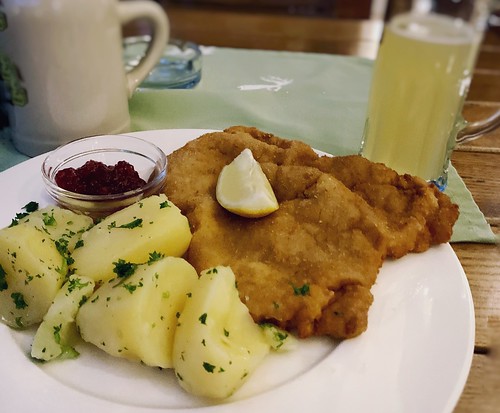 Other restaurants I dined at and would recommend are Wasserfall Restaurant, a Mediterranean kitchen ranked the number ten best restaurant in Salzburg by TripAdvisor, Sternbräu if you want to immerse yourself in Austrian culture and try wiener schnitzel in a beer garden, or L’Osteria Salzburg if you’re over Austrian food and just want some tasty late night pizza! For cocktails, the Amadeus Salzach-Insel-Bar is a fun floating bar on the river with a unique atmosphere that’s also worth checking out.

When I told people I was going to Salzburg, I unanimously heard “do ‘The Sound of Music’ tour.” It’s a four hour bus tour that leaves at 9:15 a.m.. or 2:00 p.m. and takes you to the original shooting locations from “The Sound of Music.” I was doubtful at first because bus tours aren’t my favorite; but I went for it and have to say it was a unique way to relive the memories of the movie. 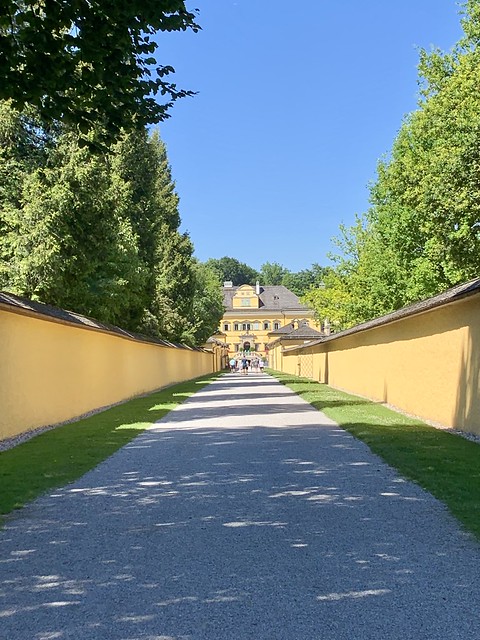 My favorite part of the tour was the scenic drive through the Austrian Lake District. We were able to stop and roam around this breathtaking area that I wouldn’t have been able to explore otherwise. 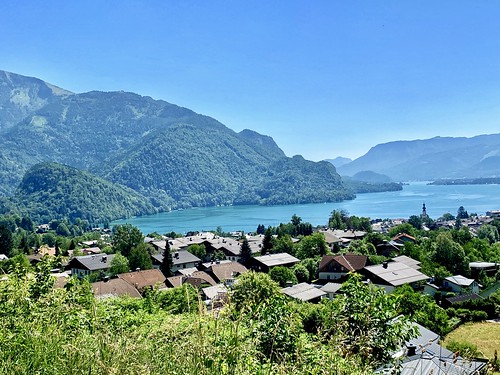 For a more active adventure, I’d recommend walking up to the Fortress Hohensalzburg. I was debating wearing my leggings and sneakers because it’s not a long walk, but I’m glad I did because it was like doing the stair stepper machine on level 15. Holy steep! It’s only €10.00 for a ticket to enter on the footpath, but for those who prefer reach the top without a face full of sweat, you can pay a tad more for the funicular, but the Aperol spritz at the end seemed more deserved after walking. 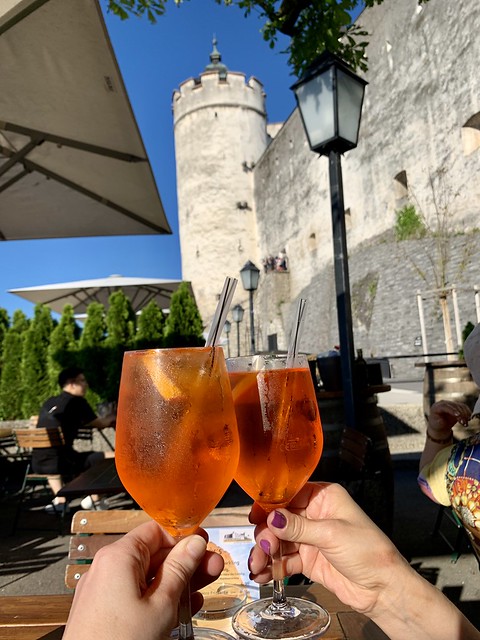 As my fourth trip to Austria and third city visited within the beautiful country, I found Salzburg to have a medieval charm that I would recommend over Vienna or Innsbruck for a true taste of Austrian culture!