We were in need of a catch-up Bitch brunch, so Shruti, Tess, and I decided to convene at Sakerum, to try the new Bento Box Brunch, which has been creating quite a buzz on social media. In a very rare turn of events, I was the first to arrive, so I made my way upstairs to the patio to wait for the rest of the bunch.

The space at Sakerum is stunning, with a dark, sleek, and sexy downstairs and a bright, playful upstairs deck that has tropical, Bohemian vibes, with a wall of succulents as you enter and Moroccan lights hanging from the ceiling. As you reach the top of the stairs, there’s a dark wooden bar, and to your right a long row of seating, with low benches with multicolored throw pillows and bright stools at table height. It’s creative and fun, just the type of rooftop where I’d like to enjoy cocktails.

Speaking of cocktails, once the girls arrived, we ordered a round. Sakerum offers an inventive, tropical variety of beverages, which left me beginning to fear for a sugar-induced headache later that afternoon. Tess chose a Greyhound, an appropriately pale pink cocktail, that was beautifully executed. Served in a low tumbler glass, the bright beverage was light and refreshing. That said, she later switched to mimosas. We all had several lychee mimosas, which were fortunately not as sweet as we had anticipated. The lychee is pretty pulpy, which makes for a messy cocktail and a not-so-lovely texture. We would have preferred a classic option, as well. 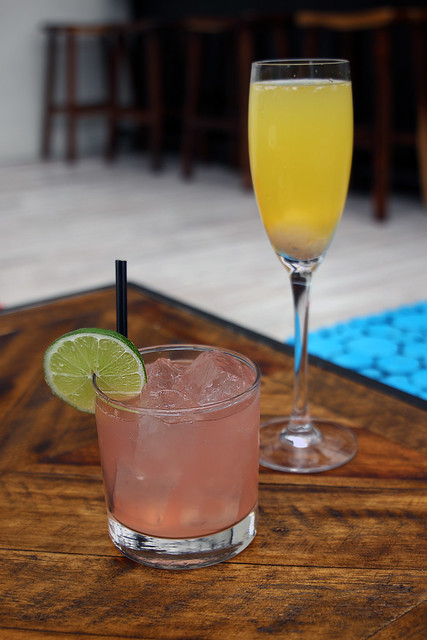 When I saw bao buns on the menu, I knew I needed to place that order, given that my dad used to make bao buns from scratch for me when I was a kid. Sadly, these were the 7-11 version of bao buns. First up, the bun was a shockingly white, fluffy, flavorless piece of carbohydrate that was definitely not made in-house. Inside the sandwich was a yummy fried egg, which was slathered in melted Velveeta cheese and topped with mini hot dogs. I think if I had known to expect an Americanized, processed version of a bao bun—perhaps as a deliberate, cheeky, redneck homage to American fare, then I might have appreciated this dish. Instead, I was just put off. 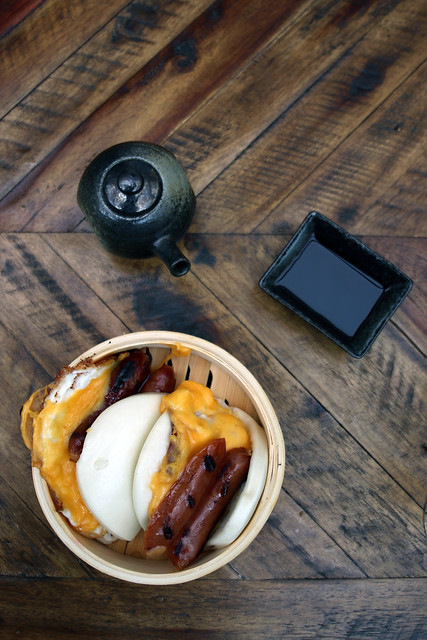 Aside from a few brunch sides, the brunch menu at Sakerum comprises five different bento boxes, each available for $29. There are fried chicken, grilled salmon, short rib, pancake, and sushi bento boxes.

The bento boxes are enormous, and each is served with fried plantains, a mixed green and seaweed salad, and bacon jalapeño home fries. I really enjoyed the plantains, which were enormous and roasted. Meanwhile, Shruti did not, but Tess definitely did. The salad was light and refreshing, but the home fries were lackluster. We barely tasted any bacon or jalapeño flavors.

Each bento box also had four pieces of maki roll, a Tamago Futomaki. We didn’t love this roll as it was made with krabstick, i.e. fake crab, rather than real crab. Though, we acknowledge that this is a common occurrence at sushi spots. The roll also contained tamago, which is a baked Japanese egg. They were certainly good rolls, but we would have preferred real crab. 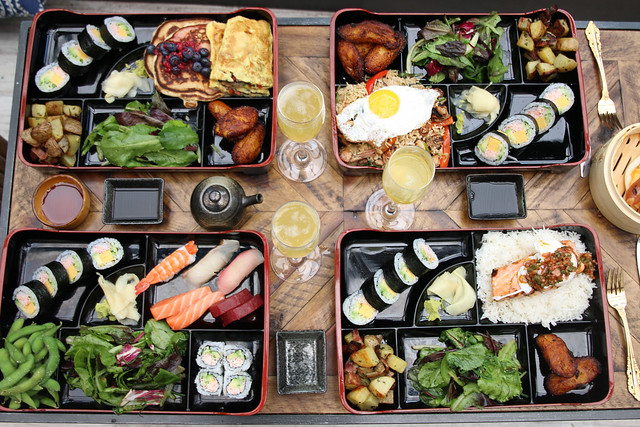 We opted to share all the Bento boxes, taking into account Shruti’s vegetarianism as we placed our orders.

They were out of the short rib option, so we took the waitress’ recommendation at the Yaki Sake, or grilled salmon. We ordered four between the three of us to share, which is too much for three people, but counts as good measure if you’re reviewing brunch.

Let’s begin with the Arroz Chaufa, which enticed me as I enjoy Peruvian-Asian fusion. The base of the dish was a pork and shrimp fried rice, accompanied by the seaweed salad, home fries, plantains, and sushi roll. Sadly, the rice lacked any flavor, and I really couldn’t muster more than a few bites. This was disappointing, as I am a hearty eater who subsists of a diet that’s based heavily on rice and meat. The rice was topped with a fried egg, which added some complexity, but, again, there was just little to no flavor in the colorful dish. 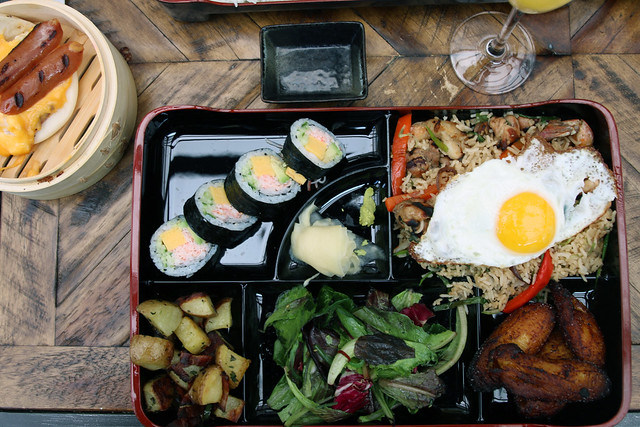 Next, the Yaki-Sake, which was one of the better bentos on the table. The salmon was moist and flaky, a beautifully grilled filet of fish. It was sitting atop a hearty helping of white Basmati rice, and topped with a poached egg and red mojo sauce. This is a great option if you prefer clean eating: as the salmon, rice, veggies, and plantains ensure all your nutritious food groups are covered. 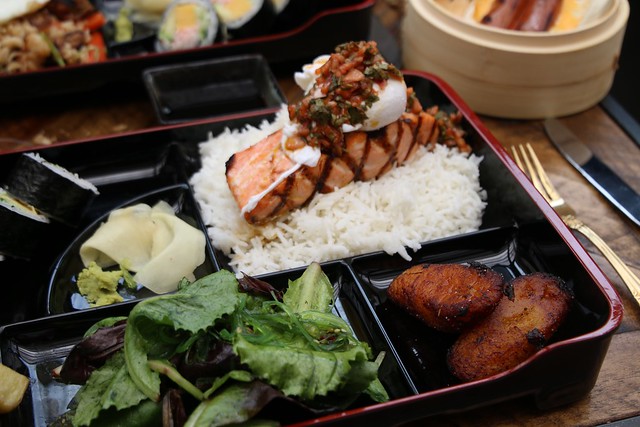 The best box on the table was the pancake and omelet bento box. You could choose from a meat or veggie omelet, and we selected veggie for Miss Shruti. The omelet was moist and packed with veggies, a well-done omelet. Nothing special, but there was also nothing wrong, either. The pancakes were an equally normal version of pancakes, but were pretty yummy. Thin, warm, and fluffy, the pancakes were topped with a blueberry compote. We enjoyed them topped with the accompanying flavored syrup. 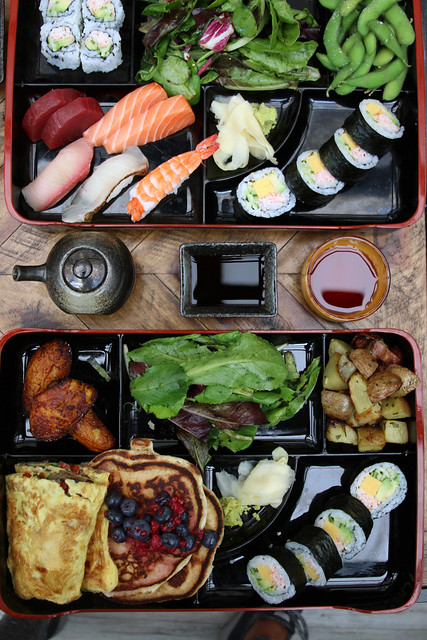 Last but not least, the sushi bento box, which featured the four side dishes, as well as a seven-piece assortment of sushi, chef’s choice. The chef selected classic options: a raw salmon sashimi, a raw tuna sashimi, a yellowtail sashimi and ebi, which were all delicious, high-quality, and fresh. Then, there was a California roll, with more fake crab. Bummer.  I’ve been to Sakerum for dinner, twice, and I’ve really enjoyed the sushi selection. I was just disappointed by the rest of brunch. 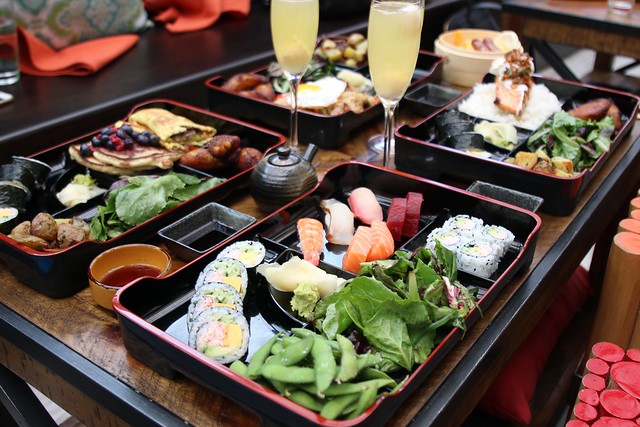 The Bitches say: B-. We love the playful decor and upbeat ambiance at Sakerum, and the inventive cocktails certainly make for a fun brunch. While there’s certainly a lot of food for the price point, the quality was lacking in the brunch fare. We really enjoyed our sushi on two visits, so we’d recommend sticking to sushi and drinks at Sakerum.