Your mission, should you choose to accept it, is to face bottomless mimosas, complete a scavenger hunt, and destroy gluttonous brunch foods. Good luck. 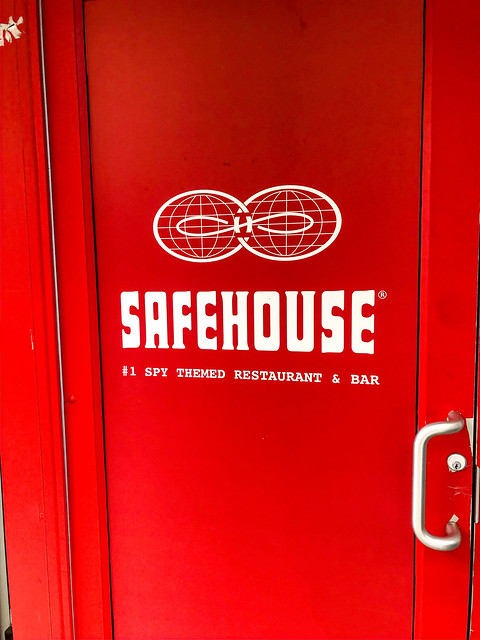 SafeHouse’s Bond-themed brunch is an amalgamation of Rainforest Cafe and Washington, D.C.’s International Spy Museum. Between activities, an extensive menu of brunch-y bar food, and the bottomless mimosa deal, it’s quite the experience. I was nervous but intrigued when they invited me in for a complimentary brunch. I brought my new friend, Leah, along for the ride. Because if you’re in the market for a new friend, an escape room and unlimited alcohol is the best way to see if they are true friend material.

We stood outside of the red door marked “Safehouse” and wondered what we were in for. As our group was ushered in to the Safehouse, an agent asked us for a password – which we did not have. The password allows you to bypass the intensive screening, issued to make sure you haven’t been compromised. Our screening required arm flapping, spinning, and general goofy tasks best enjoyed by children. We were cleared and told the password for our next visit. A door opened, and we descended a dark staircase to the bunker. 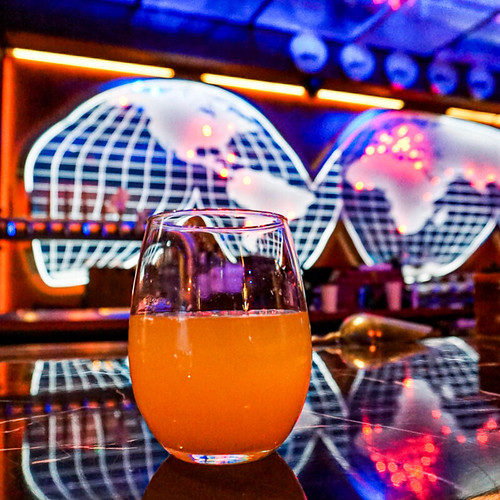 Downstairs, the restaurant is a series of Cold War-era spy gear, buttons that advise “do not touch,” which then trigger a loud noise and in some cases, flashing strobes. Safehouse is family-friendly, so dozens of children scurried around, trying to complete their activities. It is a noisy atmosphere and one I would not want to encounter hungover, but if you have a small niece or nephew in town, you’re going to be the coolest aunt. There is a magician, a bar stool that slowly sinks to the ground, two way mirrors – and perhaps, most hilariously, a large screen where you can watch newcomers try to pass their entry screening. All of that arm flapping, spinning, and dancing required to get in was broadcast to the entire restaurant below.

And with that bit of knowledge, Leah and I were ready to try to find the bottom of bottomless mimosas. At the table, we met Agent Happy, our friendly and knowledgeable waiter. We were given a marker and name tags to pick our spy names. Put on the spot, I opted to go with my dog’s name, Franklin, but other people had much more creative names. Brush up on some operative names before visiting. 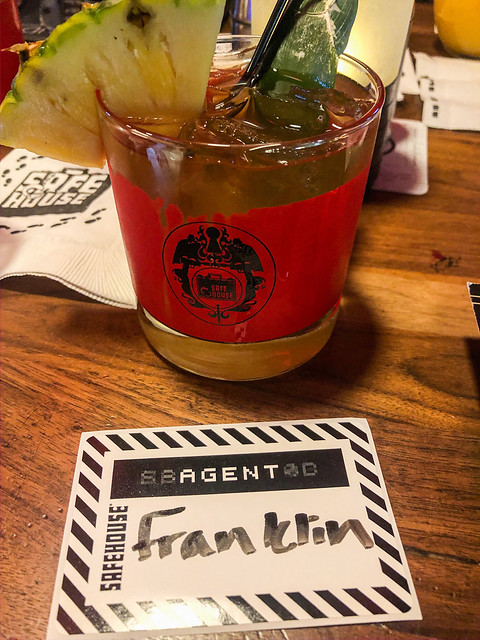 Safehouse makes a mean drink: they’re tangy and strong. We both had mimosas, and split a rum-based drink called “the spy’s demise.” It was tropical but ultimately too much rum before noon, and I switched back to mimosas. 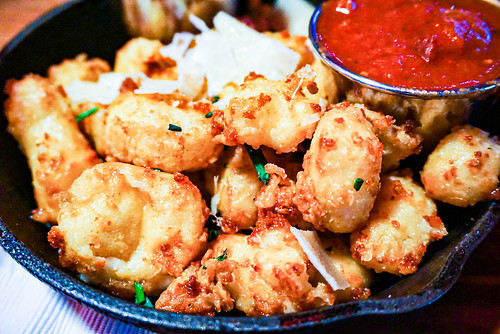 The kitchen brought out some of their favorite bar snacks, including fried pickles (yum), a giant pretzel (okay), and the C4 cheese curds (meh). After a few bites and a few more drinks, it was time to tackle our mission. We teamed up with some other foodies and worked our way through the riddles and scavenger hunt. From searching for a piece of the Berlin wall, to playing with the two-way mirror in the women’s restroom, these missions will get your whole table involved and out of their seats. There is even a magician on site. Safehouse regularly mixes up the mission, so you won’t have the same adventure twice. 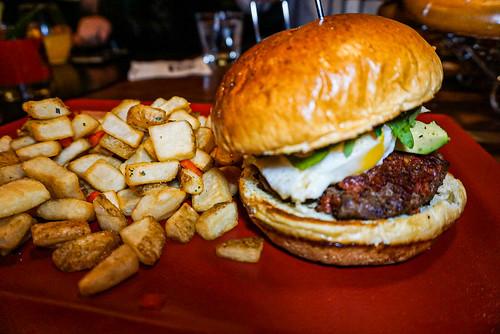 Back at the table, it was time to crack the case wide open. And by case, I mean SafeHouse’s American menu. The options tend toward indulgent and gluttonous like the burger served on a donut. It is sure to intrigue and delight your pickiest eater.

Leah got the Duquesne burger, named after an infamous spy ring. It was a beef and chorizo burger, topped with pepper jack cheese, fried egg, avocado, cilantro lime vinaigrette, and chipotle mayo. It came with a side of home fries. It is not the best brunch burger in Chicago, but it’s no slouch. Ultimately, you’re coming to Safehouse for the shtick and adventure and not the culinary genius. But you’ll be pleasantly surprised. The fries were bland, but it was such a heaping serving that there was no need to finish the whole plate. 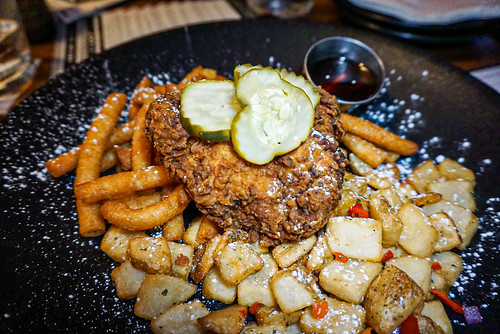 I ordered the B-1 bomber; a fried chicken dish served on top of funnel cake fries and home fries. The chicken needed the assistance of some hot sauce, but the funnel cake fries were great. They were crisp, sweet, and a really fun twist on one of my favorite dishes, chicken and waffles. 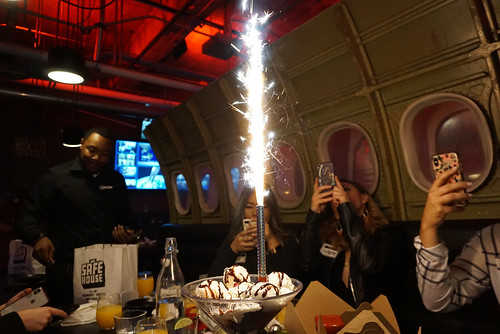 The table split a dessert, colorfully titled “fat bastard,” a sweet-lover’s dream of brownie bites, chocolate cake, and ice cream, topped with whipped cream and chocolate sauce. It was a classic brownies and ice cream, made even more sweet by the large sparkler on top. Have your phone and spoon on the ready for this dessert.

When it was time to go, we left through a secret exit, to preserve our identities. By this time (after the mimosas), we were leaning into the adventure and climbed and crawled our way through the dark hallway filled with laser lights.

If you love escape rooms, have young children brunching with you, or are looking to role play with your friends, you’ll have a good time at SafeHouse. The drinks are strong, the food is better than expected, and the missions are silly. Mission accomplished.