Hummus was a fad that never faded. But hummus is bigger than ever because now restaurants are making this beloved snack food the main event on their menus. Famous chefs across the country, and D.C., are making hummus trendier – and more delicious – than ever before. Sababa is an Israeli restaurant in N.W. D.C. and is bringing hummus to stardom. 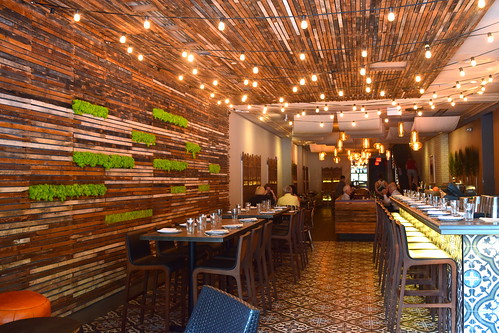 As part of Knightsbridge restaurant group, Sababa shares a space with its sister restaurant, Bindaas. And just like its other restaurants, it brings bold, spicy flavors to every dish. Sababa is a two-level restaurant with beaded pillows, whimsical carvings on wall tapestries, and artwork that resembles a souk in the desert. 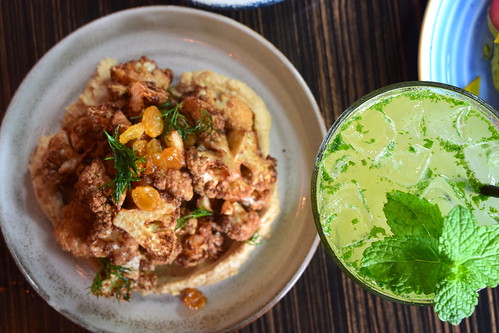 The brunch special gets you an appetizer and a large plate for $22. You can add on bottomless to that deal for $35. You can always order a la carte, and we encourage you to do so. We opted for a classic bloody, pomegranate mimosa, and a limonata with our appetizer and entrées. The mimosa was a little more fragrant than what we’re used to, in a good way. It had a seasoned rim and had some zippy lip-puckering qualities. The bloody was a bit too acidic and vodka heavy, making the drink watery and unenjoyable.

The beverage champion was the limonata, which is your choice of vodka or gin, lemon, apricot, and mint. This is what we wish our vodka sodas with lime or lemon would always taste like. It’s refreshing, light, and perfect for brunch with a serious dose of flavor overload. 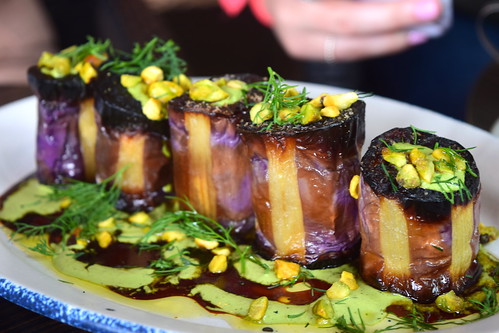 To begin what felt like a luxurious trip to the Middle East, we indulged with charred eggplant, roasted halloumi, fried cauliflower, and corn falafel. The eggplant looked like an exotic rollatini but was actually delicately shaved eggplant slow-roasted to optimal suppleness. It was served with pomegranate molasses, herbed labneh, and pistachios. The sweetness, silkiness, and crunch from all these components were different and delicious. 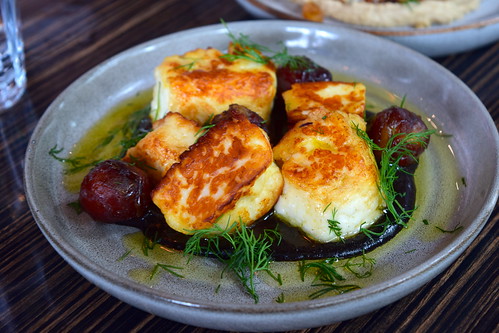 The roasted halloumi was a fan favorite. It’s best enjoyed in a complete bite with its accouterments of dates, herbs, and charred lemon, as it’s somewhat bitter when enjoyed deconstructed. 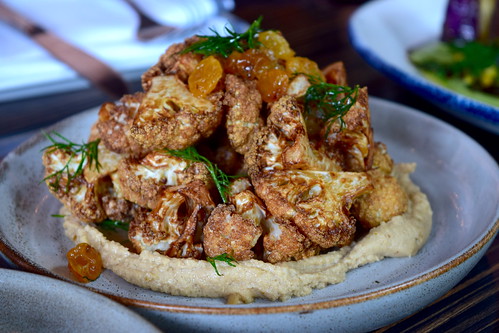 As with all things fried, this fried cauliflower was guiltily delicious. The crispy exterior was perfect for scooping up the tahini and swollen golden raisins. The dish was a salty, fatty, sweet situation. 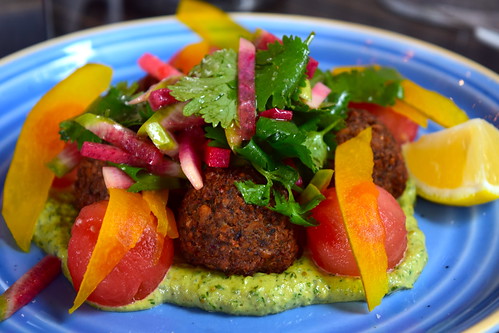 Corn falafel isn’t something we’d normally pounce on, but after tasting this with the a la carte falafel, it was love at first bite. The extra starchy, crispy balls of falafel were moist on the interior and a perfect appetizer-sized portion for sharing. 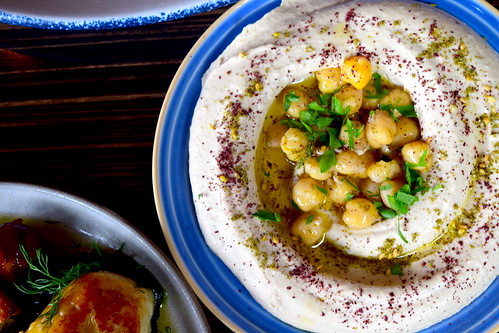 Let’s talk hummus. This hummus and tahini ratio is pretty much one to one, as boasted by the head chef. The creaminess and subtle garlic notes make it a clean, ladle-into-your-mouth type of endeavor. 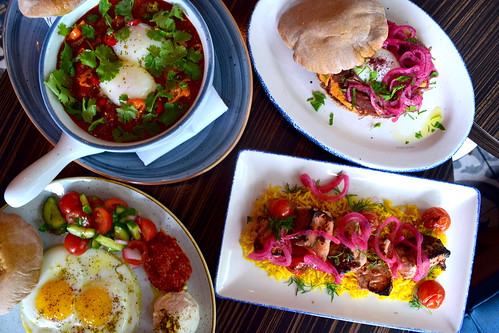 As for mains, we tried to taste a little bit of everything. We had the salmon kebab, shakshuka, lamb and egg pita, and the Israeli breakfast. The salmon was perfect, two-bite sized cubes over a mound of yellow rice. This was delicious, subtle, buttery, and something that I truly would eat for dinner seven nights a week. That said, amazing tastes all around, but the other dishes we sampled are worthier of your brunch bounty. 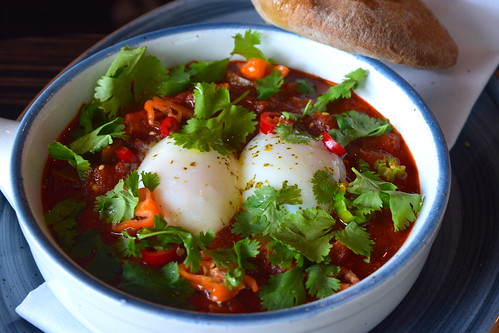 The shakshuka and Israeli breakfast are staples in middle eastern cuisine. Lightly poached eggs in a brothy tomato-chili broth with fresh parsley is comfort food we’ve searched our soul for only to be previously disappointed by an overcooked egg. Not this time: the dive-in-ready dish was dip-able, gulp-able, and absolutely lovable. 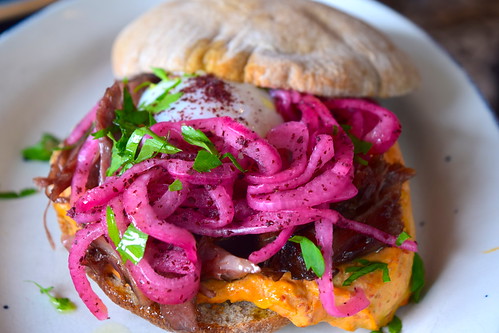 The lamb and egg pita is everything eggs Benedict isn’t but should be. The same perfect poached egg rests on a creamy harissa hummus that takes the position of hollandaise sauce. Accompanied by shredded lamb, this savory, salty sandwich of Mediterranean decadence is a type of delicious we have never experienced before. 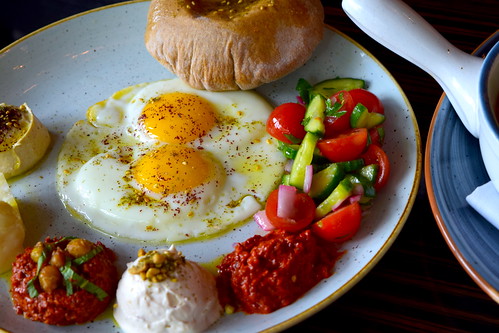 Israeli Breakfast: the mezze of your breakfast fantasies. Fried eggs, hummus, pita, Israeli salad, labneh, muhammara, and walnuts are stand-alone soloists of Sababa that make a melodic choir when combined together. Everything is right about this platter. 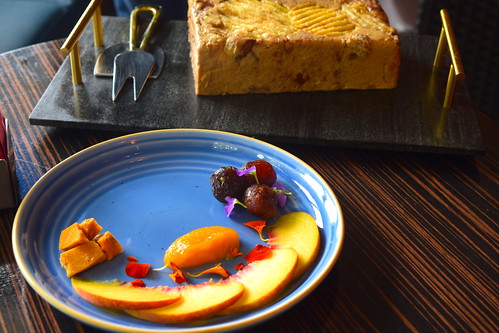 Though we swore we wouldn’t, we did. We had the famous Halvah, made more famous because the flavor changes regularly. Halvah is a dense, fudge-looking sweet that’s made of sesame and any other style of flavor chosen to add to it. It’s kind of like the inside of a butter finger, but softer. A big loaf-shaped form of Halvah is sliced tableside and placed on a plate with some fresh and dried fruits as well as some toffee. This encounter was new for us, but we’re never going back. We sought out retail Halvah immediately for our back pockets.

We wanted to go to Israel, but the best parts of Israel came to us! Sababa is worth the trek to Cleveland Park any time of day.

Sababa serves brunch Saturday and Sunday from 11 a.m. to 3 p.m.