Rumble Boxing with its cherry red bear has been at the center of the LA influencer scene all summer. Scrap the bear, add an Abe Lincoln with boxing gloves, and D.C. is ready to join the Rumble boxing cult alongside LA, San Francisco, NYC and Philadelphia! 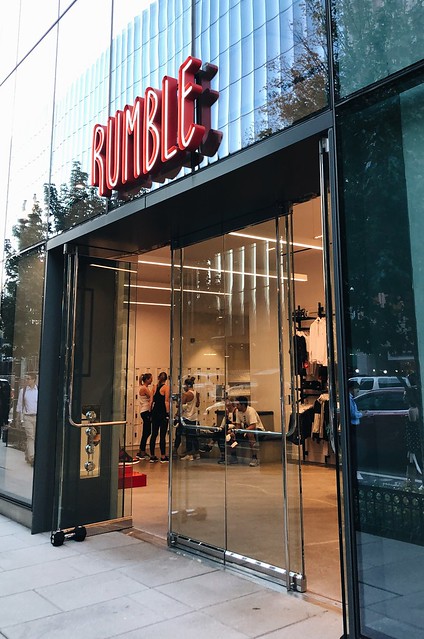 Rumble Boxing D.C. opened in April and is located on M street in the DuPont Circle neighborhood – a location perfectly suited for those working downtown. Conveniently, I happen to work right by Rumble Boxing, so after one long week I popped into Kareem’s 6:30 class to punch out the stress of the week. 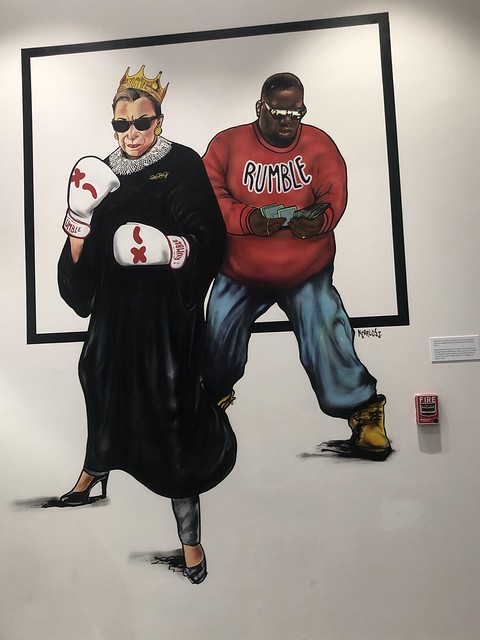 Rumble Boxing is an Instagram playground. Upon entering, you are greeted with a mural of Ruth Bader Ginsburg decked in boxing gloves sparring right next to Notorious B.I.G. Turn to the right and a statue of Abe Lincoln sporting boxing gloves provides the perfect backdrop for the pre-workout boomerang (trust me, don’t wait until the end- sweat will be pouring from every part of your body). The lobby is incredibly spacious by D.C. studio standards and has personal lockers with mirrors inside, perfect for more “ready for class” selfies. 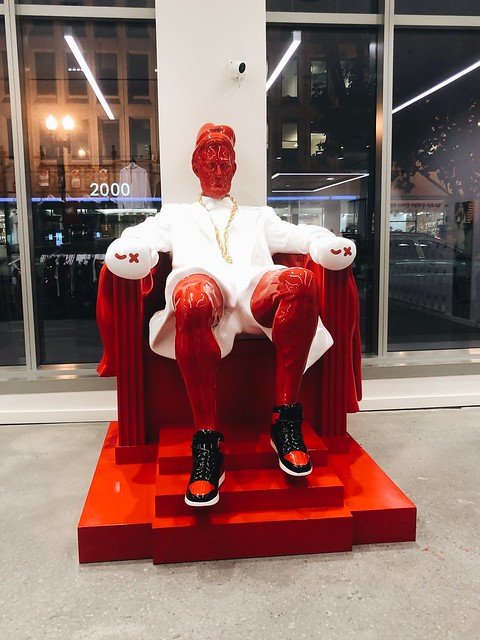 The check-in in desk cannot be missed, as it’s flanked with a wall of Rumble’s boxing gloves with the studio’s smiling, street-art inspired logo. Upon entering, one of the front desk staff will ask for a last name and chat through the studio amenities and remind you of your bag number. They will also ask if you need wraps, which are available for purchase for eight dollars if you need to rent boxing gloves, which are available to rent for three dollars. The rental for the first class is free.

After stowing your things, grabbing your gloves (don’t put them on until instructed), and wrapping your wrists, you can hang out on the stadium seating. It features murals of the boxing greats as well as some interesting and hilarious celebrity references. 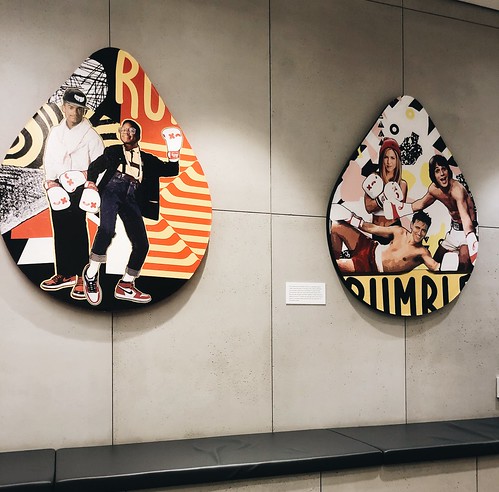 When it’s time for class a studio helper will make an announcement and guide you and your fellow boxers into the studio. The studio can only be described as a sexy, exercise club. The room is split into two sections- the bags and the floor, both of which have numbers prominently displayed so you can locate your station in the semi-darkness.

After we all filed into the studio, Kareem spent five minutes before class guiding us through the six punches we would be using: jabs, hooks, and uppercuts. Next, we were lead through a few combinations of the punches. We started with some ghost punching and practiced footwork and ducking, then it was time to actually start punching things… well almost. 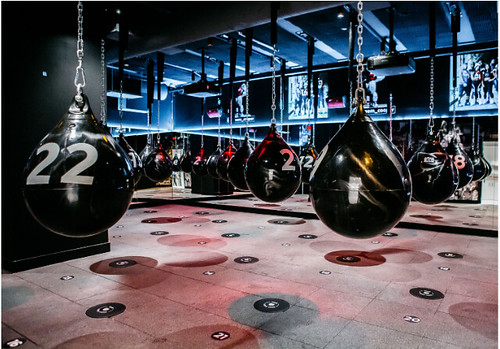 Kareem led us through a series of warm-up drills from jumping jacks to cherry pickers to mountain climbers. Then we were instructed to put on our gloves and get ready to begin class. The actual punching bags are teardrop-shaped, 180 pound water bags designed specifically for Rumble- different from the traditional long punching bag. There is also a digital display in the front of the room to remind the class of the punching/jabbing/upper cut sequence for that round as well as the time count for the exercises on the floor side. 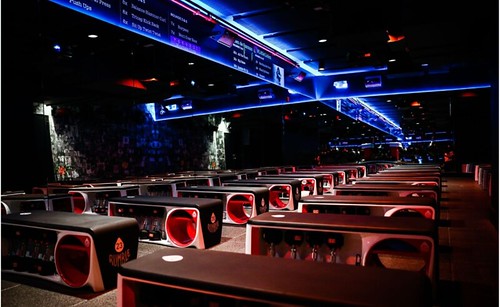 Once gloves were on, the music started and it was a killer playlist with new school and classic hip-hop. Kareem demonstrated each of the punching sequences then walked around the room correcting form and shouting words of encouragement. He came over and reminded me to keep my gloves up in front of my face when not punching, which I wasn’t even thinking about.

After three rounds of three minutes each executing sequences on the bag, we stripped off our gloves and moved over to the floor side with our benches. Each bench conveniently has all the weights and brass knuckles you will need for the exercise sequence underneath, which eliminates the awkward dash for the five-pound weights in the back of the room. I thought the bench exercises would be a bit of a break but wow I thought wrong. 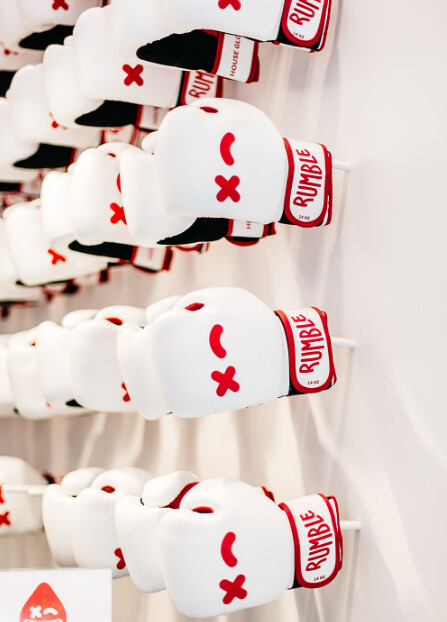 In our first sequence, Kareem led us through a series of arm curls, planks and speed squats, completing each sequence six times before cycling through for three minutes. In our next sequence, we did “batwing” lifts, lying down arm lifts, and speed squats in thirty-second intervals for three minutes. We moved into a third series of bench exercises completing reverse lunges, back rows, and squat jumps for thirty seconds each for the 3 minutes. Once we finished these two sequences, we went back to our bags and strapped our gloves back on for boxing round two.

Back at the bag we ran through some more complicated sequences, and in between each round we completed boxers sit-ups, which are normal sit-ups but you make a punching motion at the top of the sit-up. During round two, we also got to do a “freestyle” round where we could do any combination of punches that we wanted. It was empowering to be able to hit the bag in any sequence!

After round two, it was back to the bench where we grabbed weighted brass knuckles for the next sequence of full-body exercise. We moved through a sequence of bicycle kicks, slow leg raises, and butterfly crunches for six reps each for three minutes. We then did a series of push-ups, quick jab punches, cherry pickers and mountain climbers for thirty seconds on rotation for three minutes. Just as I thought I would turn into a puddle of sweat – class was over! Kareem led us a through a series of basic stretches, and then we were free.

After class I went to the bathroom to freshen up, and it’s not something to be missed. The immaculate bathroom has three showers outfitted with Dry Bar hair products as well as six vanity stations complete with Dry Bar blowdryers. But the real stars are the two infrared saunas tucked into the back of the bathroom. This is the type of bathroom that is a luxury to get ready in! 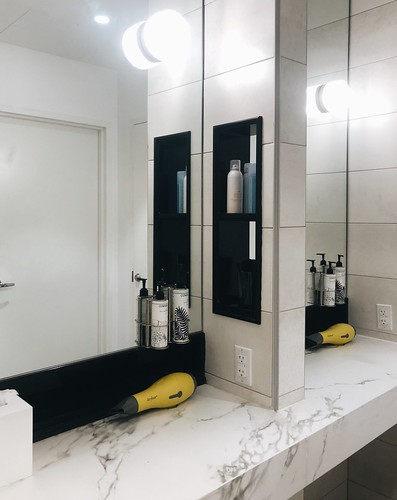 We haven’t been this obsessed with a workout in a long time, Rumble brings an edgy energy along with a killer calorie burn. Oh – and the perfect backdrop for an Instagram humble brag!