During my recent visit to North Carolina, I was excited for a day to myself with Sarah, my beautiful, hilarious friend and sorority sister who lives in Raleigh. Sarah’s a nurse—saving lives on the regular—but still makes time to teach Pure Barre, practice her hobbies of art and cooking, and be a great friend. She’s an excellent example of a gal who keeps it together and supports her friends. She also has her pulse on Raleigh’s burgeoning food and beverage scene, having made excellent recommendations—Raleigh Raw and Brewery Bhavana among them.

For brunch, Sarah suggested Royale, a charming French bistro in the heart of downtown. Built into a cozy corner with floor-to-ceiling windows, Royale exudes casual, chic French vibes, with exposed brick, vintage velvet couches, and Carrara marble tables with classic Thonet bistro chairs. I wanted to move in immediately—or just speed off with all the furniture.

When I arrived, Sarah was seated at a window-side table for two with a grapefruit mimosa in hand. I was impressed with her choice in cocktail and seating arrangement—gotta have that beautiful morning light for beautiful pictures. I placed the same beverage order—grapefruit mimosa, light on the grapefruit—and the friendly waiter whisked it out shortly. 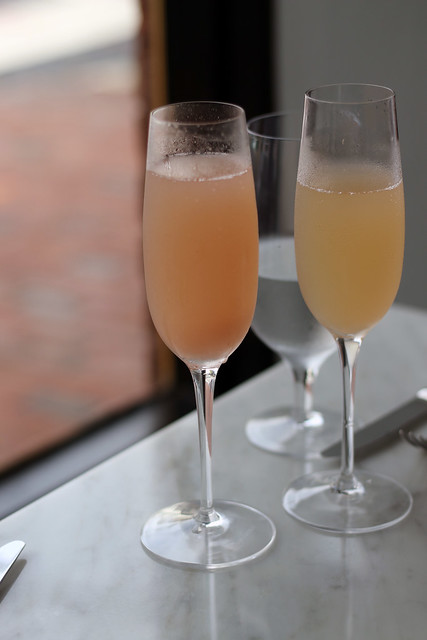 Our server was attentive but not overly so, affording us the time and space to catch up without interruption. Following the rules of brunch, we ordered the beignets, though the French toast casserole looked incredible. Sadly, the beignets looked beautiful but they were just sort of bland. They were hot and fluffy and sprinkled with powdered sugar, but the dough lacked any taste or flavor. The easy fix would be some caramel or chocolate dipping sauce. 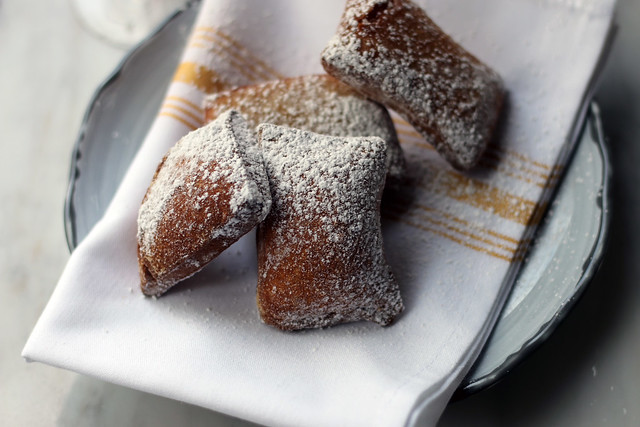 Royale rotates its eggs Benedicts seasonally, and today the choice was pork belly. This was a no-brainer, and I ordered it immediately, requesting my eggs poached a bit more solidly. 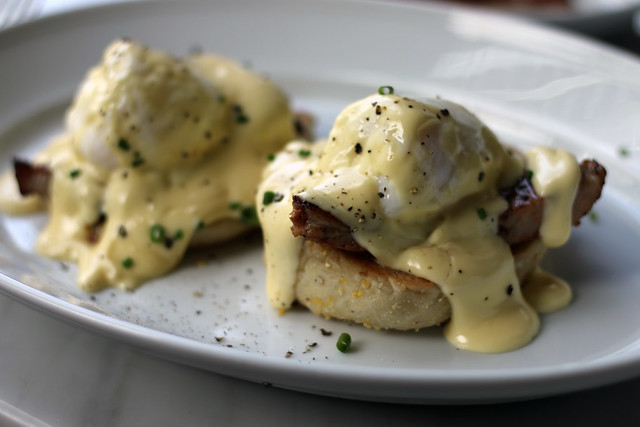 When my eggs Benny arrived, it was absolutely beautiful. The dish was presented atop two fluffy English muffins, which are baked by a local woman around our age. The muffins were dense, fluffy, and fresh. The pork belly was plentiful and not too fatty, which I appreciated. The eggs were poached to my liking. However, the dish was utterly drenched in Béarnaise, which is a problem even when the sauce is good. For the record, the Béarnaise was delicious, but there was simply too much of it. I ended up scraping half of it off the eggs and pork and pushing it to the side.

We’d both had long booze-filled Saturday nights, so Sarah was looking to eat healthy as a result of her fiancé ordering a gigantic pizza from Benny’s to their doorstep around 2 a.m. the night prior. I can’t say that I blame her. She was persuaded by the waiter to switch her order from a side of scrambled eggs and a side salad to the soft scrambled entrée, which was a wise choice. The soft-scrambled eggs were divine, light, and fluffy and crafted with Gruyère and chives. The side salad was fresh and perfectly dressed. She made the right order. 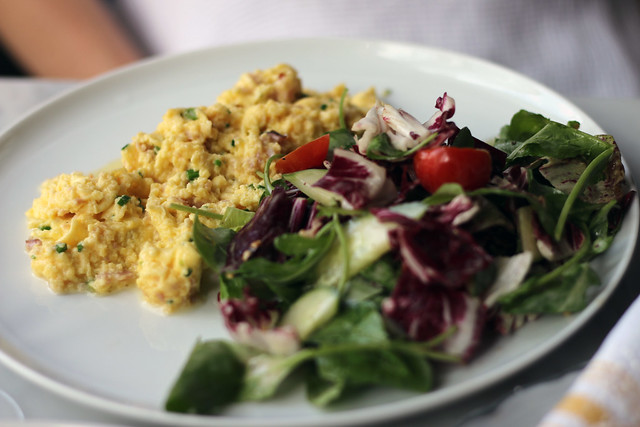 Our side of thick slab maple peppercorn bacon was indeed thick and oh-so-fatty. While I understand slab bacon to be a bit fattier, this particular plate could have been cooked a bit more thoroughly. We like a good balance between fatty and crispy—and two of the three slices were nearly all fat. 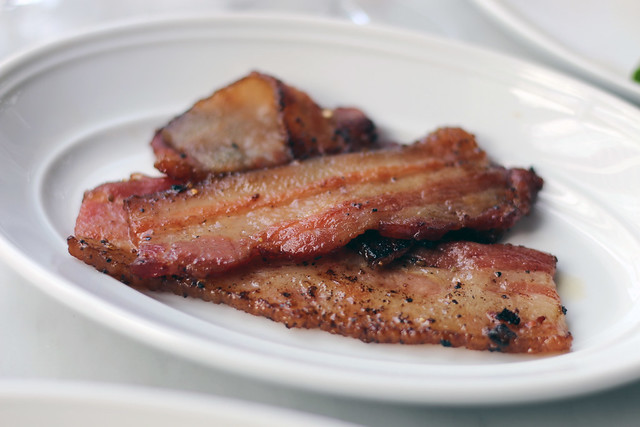 The Bitches say: B+. A charming French bistro in the heart of Raleigh with chic vibes, great cocktails, and solid food. There could be some slight tweaks, such as better beignets, bacon, and less Bearnaise, but we’ll still keep it high on our list of brunch spots down South.