Specialty foods are taking over our restaurant mood vernacular. We find ourselves suggesting “want to go for pasta?” rather than “Italian” – or “burgers” rather than “American food.” Concept restaurants are bringing a more specialized approach to the D.C. food scene. Whether its bagels, tacos, or steak frites, it’s evident brunch establishments are creating more and more specific cravings to differentiate themselves. 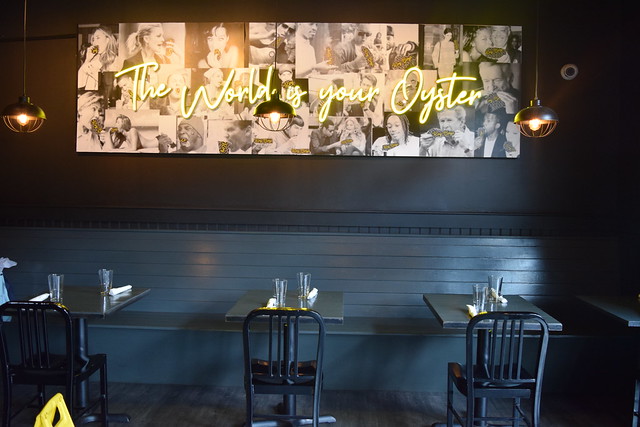 Roy Boys is no exception. The open-concept restaurant is known for its fried chicken and oyster dishes while also combining hip-hop street style with southern fare. The experience created is one decadent– slightly over the top– food, drink, and vibey position. 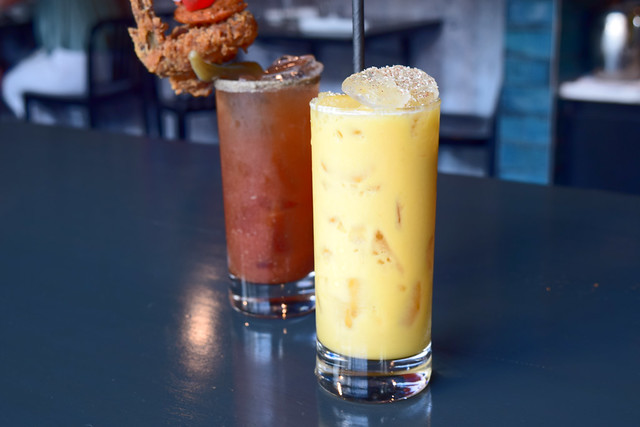 The entire menu is available during brunch, so you won’t miss a beat on any of the daily offerings. We began with a “power-up” cocktail, which consisted of Bacardi Ocho, coconut, spiced mango puree, passionfruit syrup, and orange juice. This drink was kind of like an unblended pina colada, making it seem less sweet despite all of its sugary mix-ins. We also ordered a bloody Maria (made with tequila) and oyster shooters, because when oysters are on the menu, you order said oyster shooters. The shooters came in the same well-spiced bloody mix, but with more vodka.  These went down as expected, painful but satisfying. 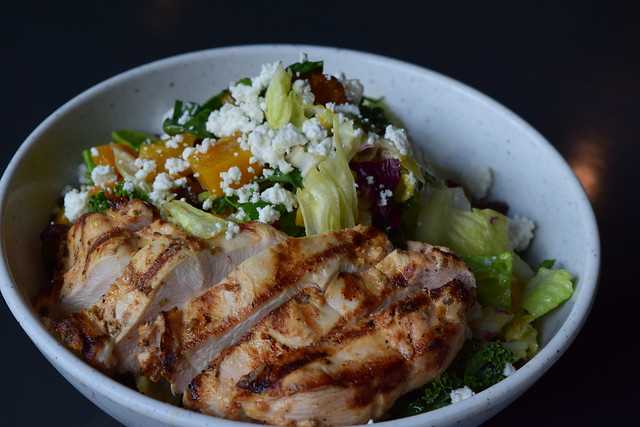 To eat we ordered their seasonal salad, because health is important to us sometimes, the Big Boi breakfast sandwich, and the oyster Eggs Benedict. The salad was delicious and massive. It’s hard to find a hearty salad beyond your basic ice berg-carrot string-cabbage situation, and Roy Boys nailed it. 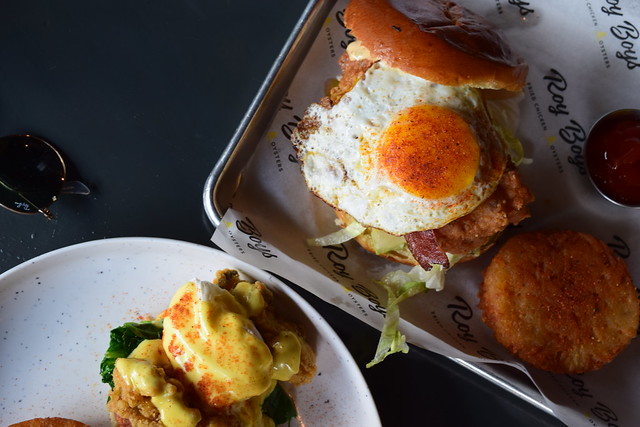 The big boi is everything you love about a fast-food burger but smacked into a freshly fried chicken breast, fancy sauce, a fried egg, and a potato bun. This sandwich is one mess of a creation, but we’d be certifiably insane to claim it not delicious. The chicken remained crispy, but not overly battered and was complimented by the crunchy, saucy toppings. 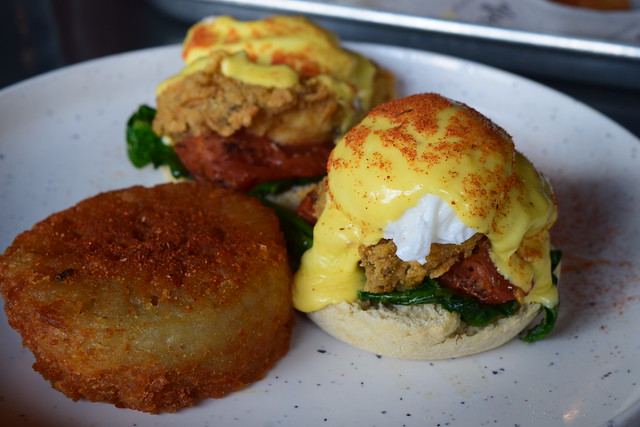 We were a bit frightened by the thought of hollandaise and oysters married into one dish. The oyster eggs benedict removed that fear, the subtle, juicy, brininess of the oyster beneath a creamy, yolky sauce and perfectly poached egg proved us wrong– we definitely see a future for this arrangement. Both the Big Boi and the Eggs Benedict were served with a large hockey puck-sized hash brown that was warm, crispy, and well-seasoned with paprika.

We had to order the legendary ice cream taco we’d seen all over social media. They have three tacos, and one rotates weekly. This week, the chef’s choice was a peach cobbler. There weren’t any real peach flavors in this besides that from a candy peach ring. The other two tacos were the dutch chocolate and a peanut butter cup version. Essentially, all three of these tacos were the same with a bit of a different topping on top. We liked the refreshing soft serve after a spice-forward, fried meal, but the waffle exterior was chewy and the toppings were too overly dismembered. We would have loved to see more unique flavors mixed into the ice cream so each bite was full of flavor.

It’s not the most refined, or healthiest brunch we’ve seen to date, but it has something for everyone and is a super fun place to kick back in the most happening part of town.