Row Republic opened in the North End a couple of weeks ago, and I could not wait to experience something new and unique to Boston’s fitness scene. A rowing studio that focuses on a full body burn is not your average spin or barre class, and this concept requires the use of every body part. The workout keeps the heart rate high by using intervals to split up strength and cardio workouts. I could not wait to get into “the deep blue” but was a little hesitant because rowing has never been part of my workout routine. 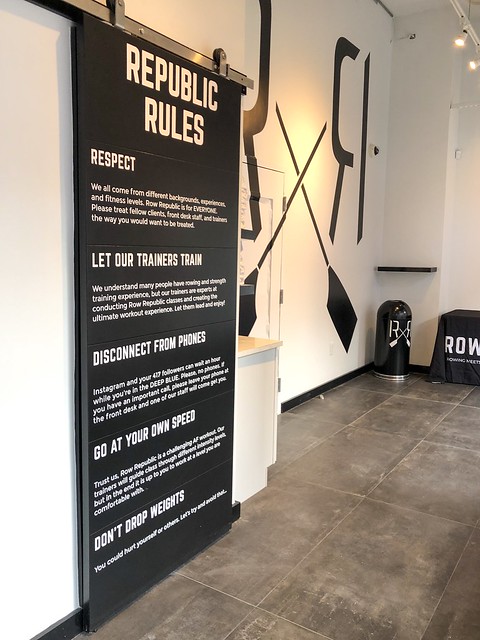 I was welcomed by Joey, a co-owner of Row Republic who directed me to the lockers, bathrooms, and pointed out where the class would take place. He let me know that an orientation would start 15 minutes prior to class for anyone who was new. I was thrilled to see self-serve lockers, the ones where you can program your own code. They are the best and put me at ease when I’m heading to a workout straight from the office. I explored a bit before orientation started and was shocked to see not only an abundance of hair care but Drybar haircare, I had to pinch myself. I imagined getting ready after a morning workout and strolling to work with freshly washed and blow dried hair styled with Drybar products vs. my usual slicked back bun. 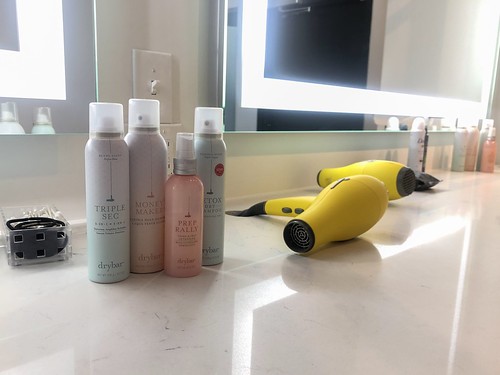 After obsessing over the hair products, I reminded myself that I was here for a workout. I made small talk with a couple of women who were also trying Row Republic for the first time but enjoyed rowing as their cardio activity. The group waiting for class to start were all young professionals and there was a good mix of fitness levels. There was a healthy female to male ratio and I could see this studio as a great place to workout with my boyfriend. 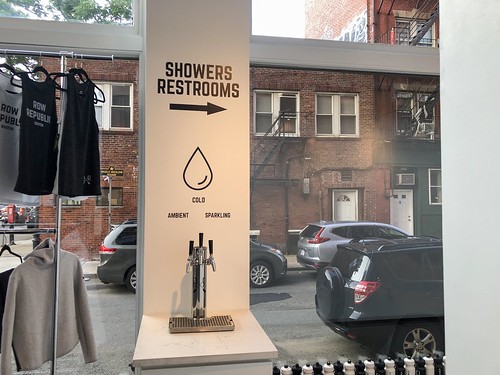 The studio itself is set up with rowers against two walls and the rest of the space was filled with FITBENCH stations. The introduction to Row Republic started with a demonstration about proper row form followed by some time to practice, the group was then walked over to the strength area and given a quick tutorial on the set up of each station. The rowers are self-explanatory machines, but I want to take a moment to highlight the FITBENCH. This was the station used for the entire strength portion of class. Row Republic is the first studio in Boston to utilize the FITBENCH and after using it in class, I am adding it to the list of things I will have in my dream home gym. The FITBENCH is a compact functional bench that holds six sets of dumbbells, six resistance bands, two kettlebells, and a slam ball in one adjustable bench. The FITBENCH reduces the time it takes for set up, transitions, and clean up because everything is stored in one place at each station. I was thrilled that I was not going to have to line up and guess what weight I was going to use for each move. 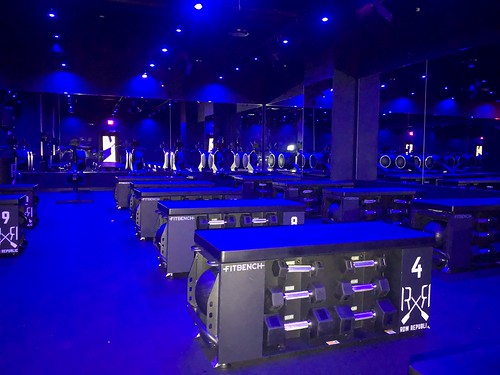 Class started with half of us on rowers and the other half on the FITBENCH. If you have ever been to Barry’s Bootcamp, the class is set up in a similar way except rowers replace the treadmills. Kristina was the instructor for my class, and I later found out that she is the other co-owner of the studio! Kristina demonstrated the strength work while half of the class warmed up on the rowers. While the strength workout was working on their first circuit, she bounced around calling out cues to everyone rowing. The class switched from rowing to strength three times and each switch became more challenging. The rowing intervals were easy to follow and the strength work consisted of bicep curls, squats, burpees, lunges, overhead presses, and med ball slams just to name a few. 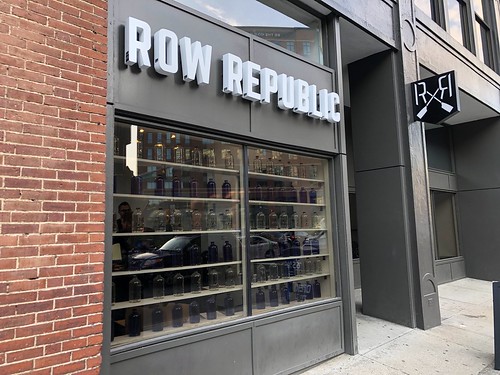 If you are someone who enjoys a good sweat then this class is for you. The lights are down creating an atmosphere where you can focus on your workout without feeling distracted. The music is motivating, there is a focus on form, and you are encouraged to move at your own speed. After class, wash off and give your hair some love with an assortment of Drybar products. I want to thank Joey for inviting me in to try out a class and Kristina for the amazing energy. I will be fitting Row Republic in to my schedule ASAP.

Row Republic is making waves in the Boston area, this state of the art studio will give you the full body workout you have been looking for using rowers and FITBENCH for a healthy mix of cardio and strength.