It was a rare summer weekend spent in the city so I made sure that plenty of brunches were scheduled. We received an invite to check out the brunch at Rossopomodoro and after seeing that it was affiliated with Eataly’s pizza operations, jumped at the chance to sample the menu. 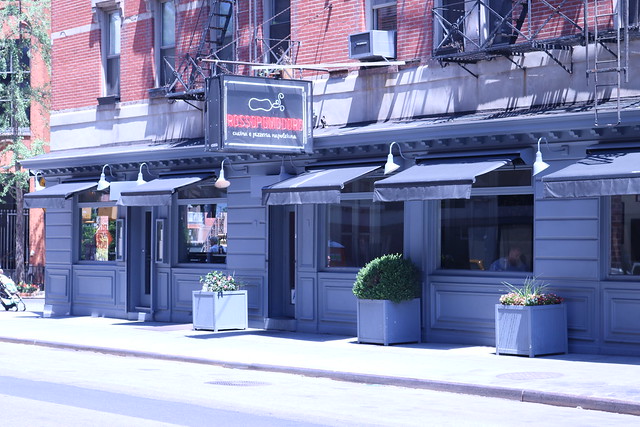 I was joined by my friend Sam, of the amazing yoga & wellness blog Catching Dragonfly, for an afternoon of some much-needed catch up time over copious amounts of carbs. We both have a love for fitness and wellness, but also are not one to turn down delicious Neapolitan-style pizza. It’s all about balance, right? 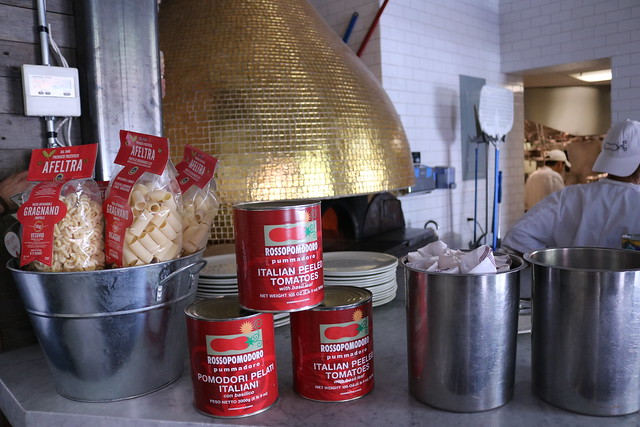 I arrived a few minutes early and received a tour around the airy West Village restaurant from the manager. The restaurant is located on a sharp corner so the narrow bar area opens to a larger dining room full of light. A highlight was checking out the gold-plated wood-fired pizza oven in the back of the shop. 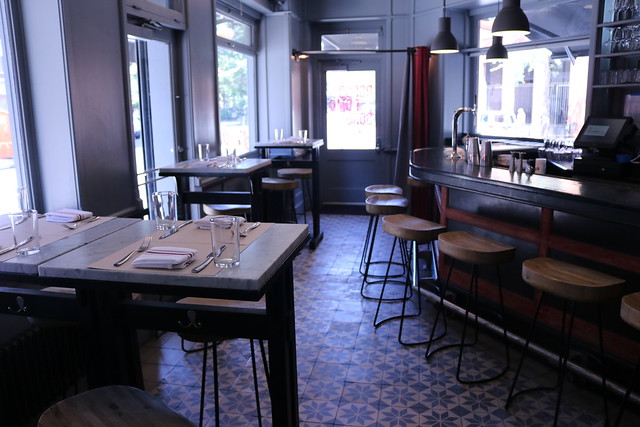 Brunch wasn’t too busy at the restaurant this particular afternoon, which I attributed to the slower summer season in the city and also that Rossopomodoro is likely better known as a romantic dinner spot. I made a mental note that this under-the-radar brunch spot is great to have in the back pocket when in the neighborhood. 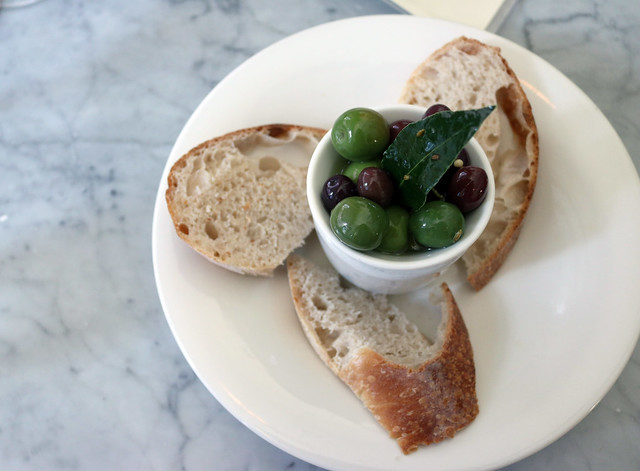 While I waited for Sam, our server brought out an antipasti of olives and housemade bread. I typically wouldn’t touch olives with a ten-foot pole, but I’ve recently developed a taste for only the bright green variety. Baby steps. I enjoyed whetting my palate with the salty veggies and the fresh bread was perfect for dipping in the leftover oil. 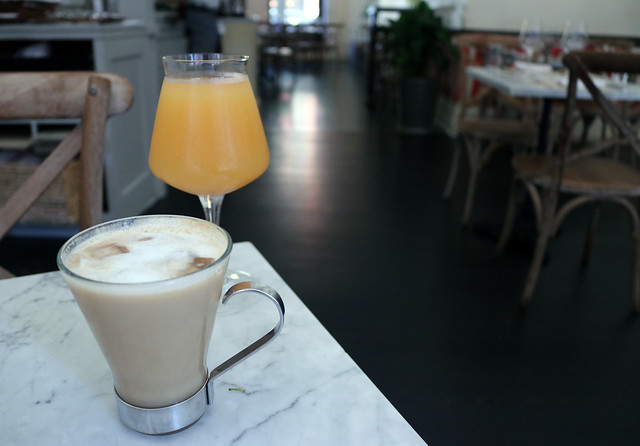 Once Sam made her way over from Astoria, we dove right into the menu. Neither of us felt like drinking so I stuck with a latte, while she ordered a fresh grapefruit juice. The latte contained strong espresso, which was much appreciated. Sam remarked that her juice was obviously fresh squeezed and quite refreshing. 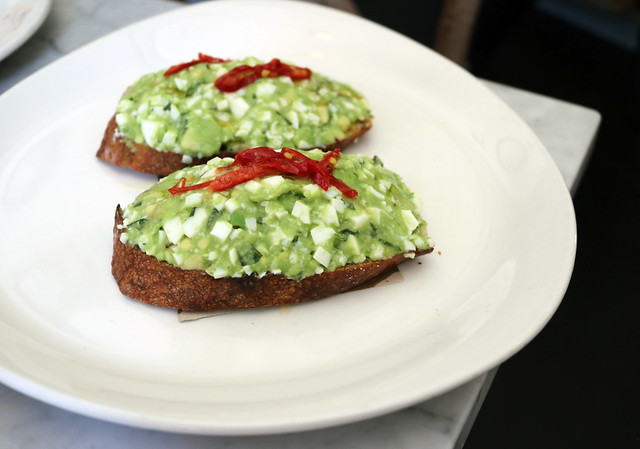 The brunch menu features traditional antipasti and verdure starters, a pizza and pasta menu, and finally more breakfast-oriented items. Our eyes were a bit larger than our stomachs and we ordered an assortment of items to work our way through together.

First on deck was the bruschetta d’avocado, basically the Italian version of avocado toast. Smashed avocado was mixed with bits of egg white and topped with peperoncino. The dish had great bursts of citrus and the egg white provided some hearty sustenance. This definitely wasn’t your ordinary avo toast. 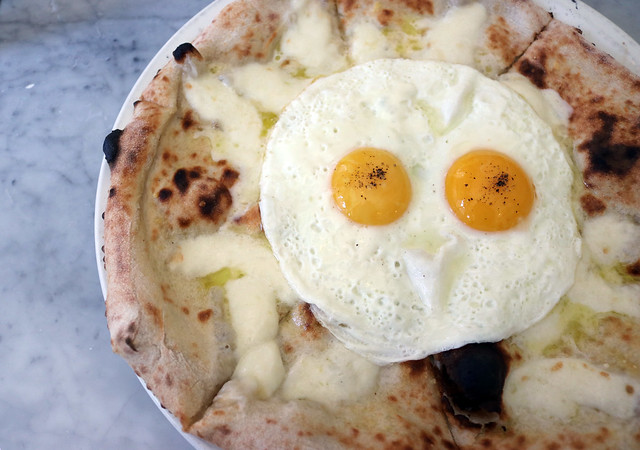 After seeing the impressive oven, we knew at least one pizza order was a must. My first inquiry to our server was if any pizzas were topped with an egg. Although there aren’t any brunch pizzas currently on the menu, the chefs spoiled us with an off-menu egg-topped pie. 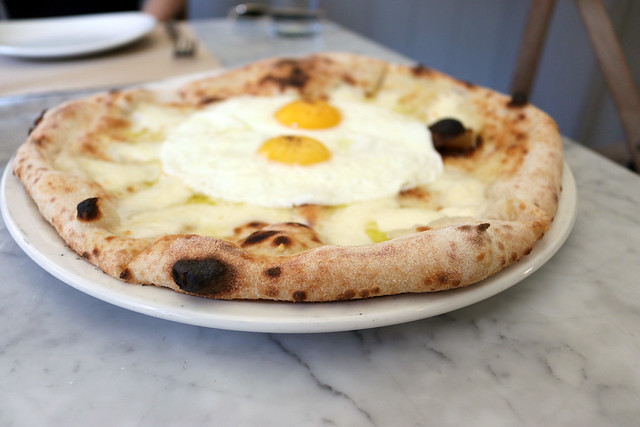 I love a good breakfast pizza and this version did not disappoint. The cheese on the white pizza was incredible and the eggs were deliciously runny, perfect for dipping the blistered crusts. 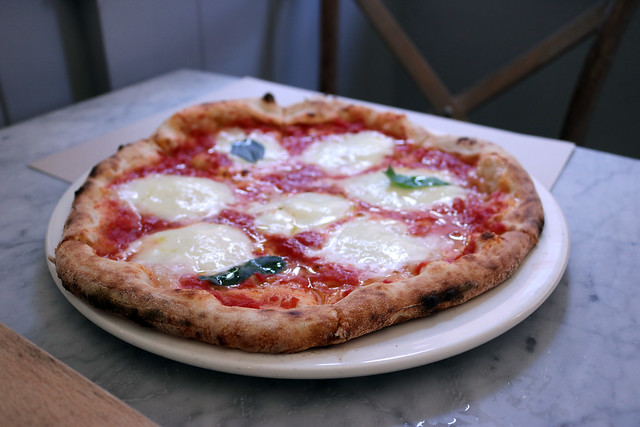 After spending a semester studying in Italy, I can’t resist bufala mozzarella on a menu. As such, we opted for the La Verace pizza, a traditional Margherita pie with bufala and fancy olive oil straight from the motherland.

This pizza is a classic, but one not to be missed. You could really tell that Rossopomodoro sources high-quality ingredients and the result were some seriously authentic eats. Sam was torn between the two pizzas and couldn’t declare a winner. We’ll call it a draw. 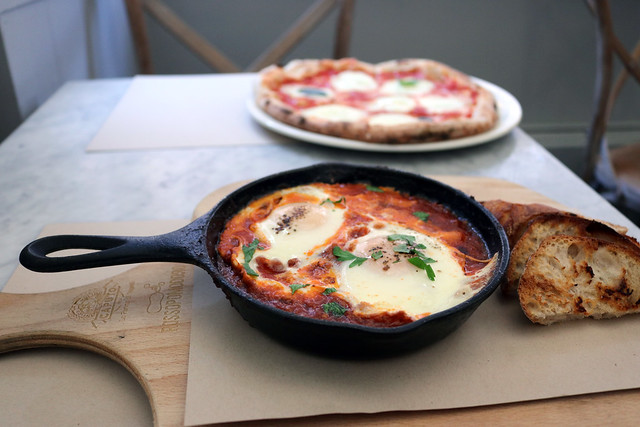 Finally, at our servers insistence, we rounded off our meal with uova in purgatorio, or eggs in purgatory. Two baked eggs were cooked in a steaming hot skillet with bolognese and topped with a heaping serving of Parmesan.

The eggs were a little too cooked for my liking, but that’s a personal preference. What really mattered was that bolognese sauce; it tasted like a recipe passed down from generations and with flavors that had been simmering for hours. It was quite rich and satisfying, definitely the heartiest and boldest of everything we tried. 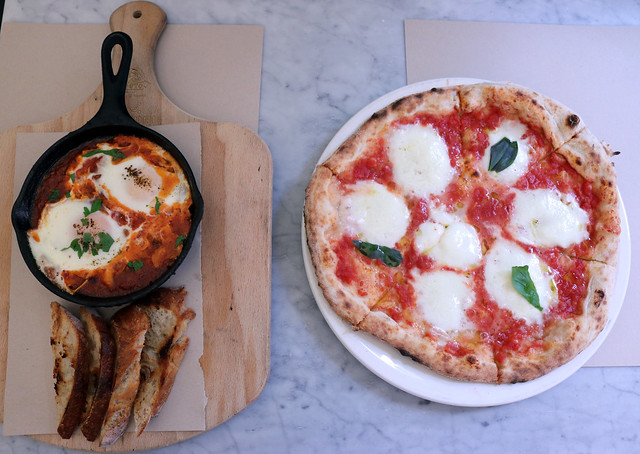 The Bitches say: A-. Quality Italian fare in a charming West Village cafe. A great way to get Eataly-quality food without the crazy lines.

Rossopomodoro serves brunch on Saturdays and Sundays from 12 until 4 p.m.