Rootstock is one of my favorite spots in Chicago. Not only is the restaurant and wine bar located right around the corner from where I live in Ukrainian Village, but it also just a fantastic place to stop in for a bit or a glass of wine, or gather with friends over dinner.

The menu is diverse and ever-changing with seasonal items. And when it comes to wine, Rootstock simply cannot be beat. 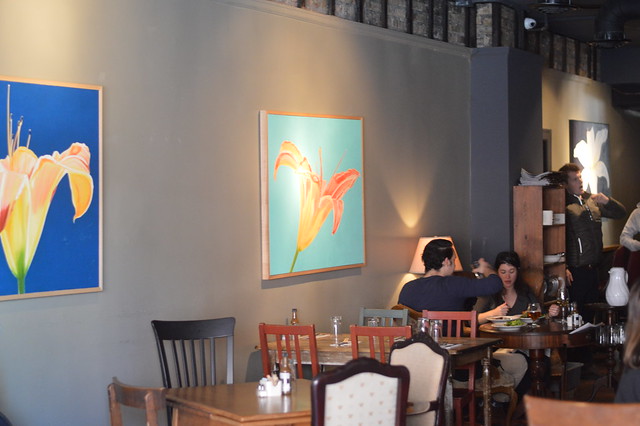 So if you haven’t been to Rootstock yet, those accolades alone should have you rushing to the West Side to check it out. 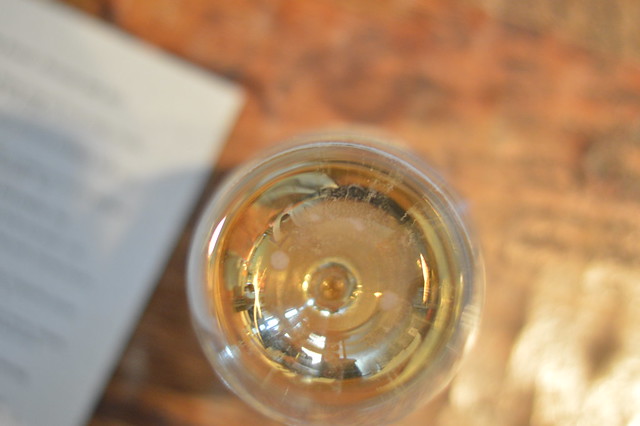 Rootstock only recently debuted brunch, and Svetlana and I had been talking about checking it out, so we headed there with our husbands on a recent gorgeous Sunday afternoon.

Rootstock is small and quaint, with unique art work on the walls, and a variety of mismatched tables and chairs. Its minimalist decor adds to the charm of the restaurant. The four of us settled on a long table towards the front of the restaurant. 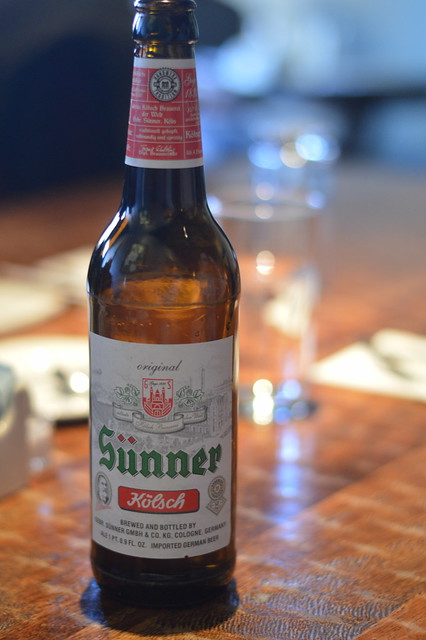 We each ordered drinks; I opted for a glass of sparkling wine recommended by our resident wannabe sommelier, Steve, while he and Chris decided on coffees and beers. As our drinks arrived to the table we took a look and the small but enticing menu.

The menu, while somewhat limited, also does not offer many of your typical breakfast and brunch items, but for foodies like us, we were excited to order a variety of dishes and try them all. Steve and Svetlana are primarily pescetarians, so they opted for some of the seafood dishes off the menu, while Chris and I went for more breakfast-like dishes. 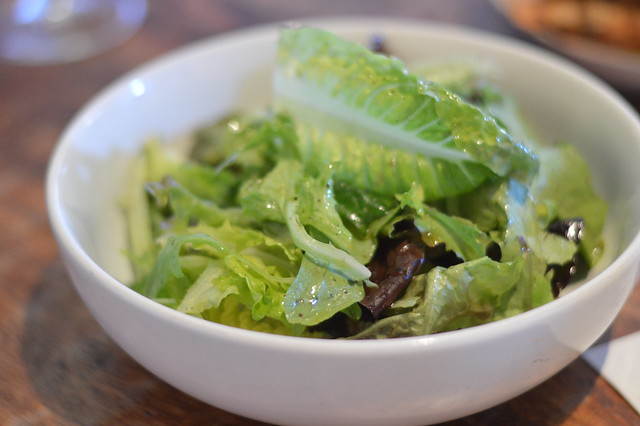 We were interested in the Werp green salad, made with nicoise olive vinaigrette, rye cracker, pickled shallot, fines herbs, and Parmesan, but when we realized that one of our dishes had a side of the salad, we decided against ordering the big one.

Nonetheless, the first to arrive at the table was the larger Werp green salad, and although it wasn’t what we had ordered, our server insisted we go ahead and eat it. It was crunchy and light; we enjoyed it. 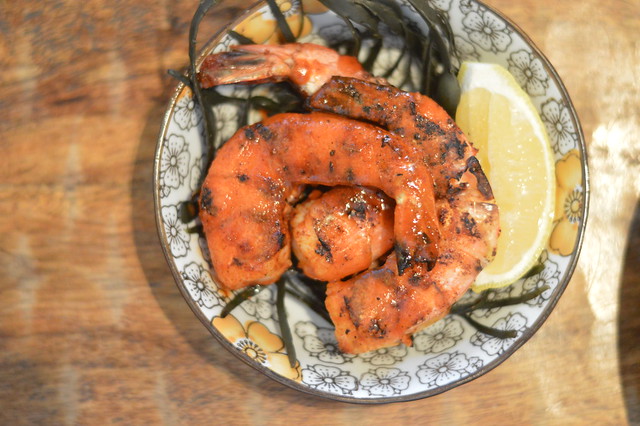 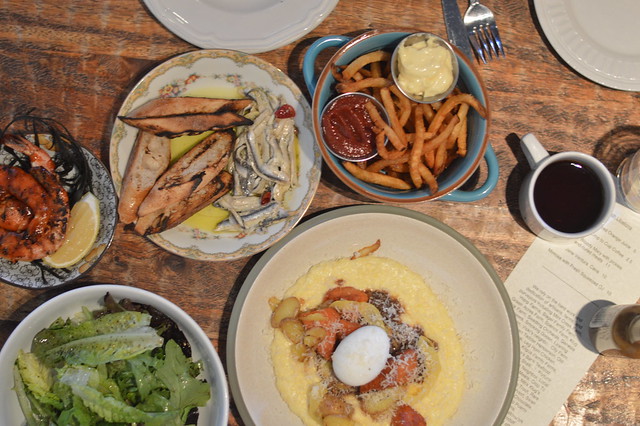 The boquerones (anchovies) were sitting in a pool of olive oil. Svetlana noted that they weren’t too salty, and had the perfect acidity. The bread was tasty, but she said that the dish could have used more of the toasts because the boquerones portion was generous. She said that a hint of sea salt flakes would have really set the dish over the edge. 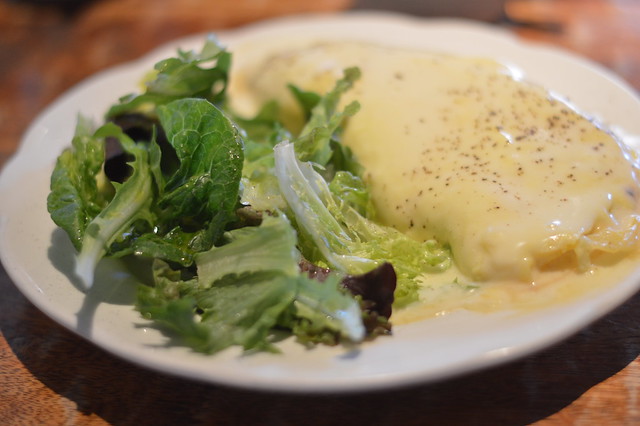 Chris went with the Rootstock omelet made with MontAmore cheddar, charred broccoli, country ham with a side of Werp lettuces. Chris liked the omelet, although it was a little too cheesy for him and made the dish richer than he had expected. 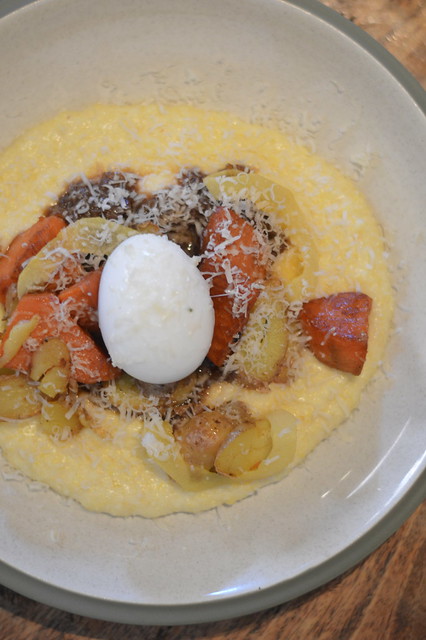 I decided upon the cheesy yellow corn grits with Brussels sprouts, roasted sweet potatoes, sweet onions, and a soft boiled egg on top. I really did enjoy this! It was hearty, savory, and with the perfect portion it wasn’t too filling. 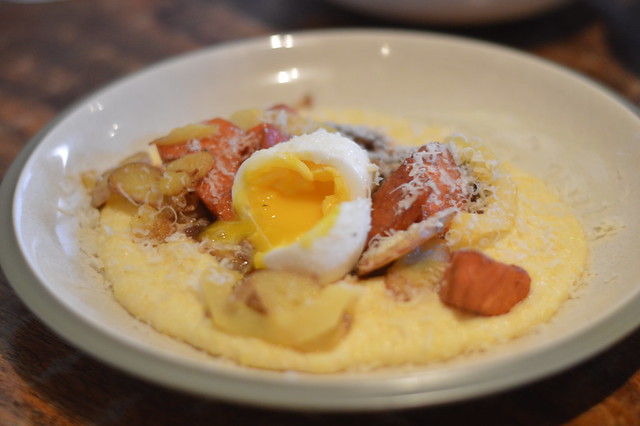 Steve and Svetlana had to get going, but with the weather being so nice, Chris and I decided to linger a bit longer. We headed to the bar to order two glasses of wine, and finish off brunch with a chocolate croissant, something I had been craving all along. 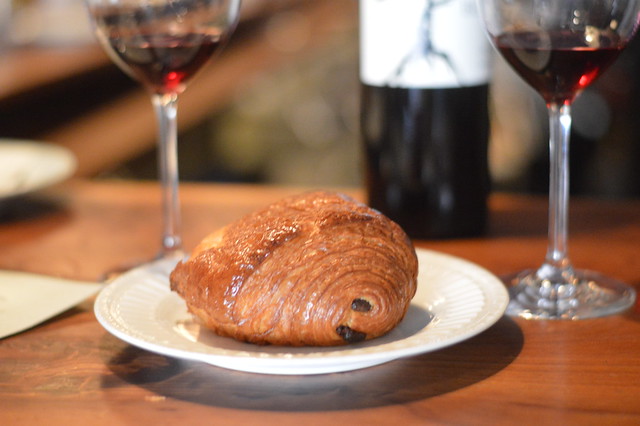 The Bitches Say: B. Rootstock is a solid contender for one of the best brunches in the area, but it isn’t for everyone. With a limited and ever-changing menu, this spot is not for brunch-goers looking to get the works. Come for a relaxed brunch with an awesome wine program and enjoy a glass or two!

Rootstock serves brunch on Sundays from 11 a.m. until 4 p.m.