Between work, events, and city life shenanigans, it can be hard to to find the time for a date night with the beau. So when Oso, a relaxing and eccentric spot in Hamilton Heights, reached out to see if we’d like to come in and taste their dinner menu, I jumped at the chance. 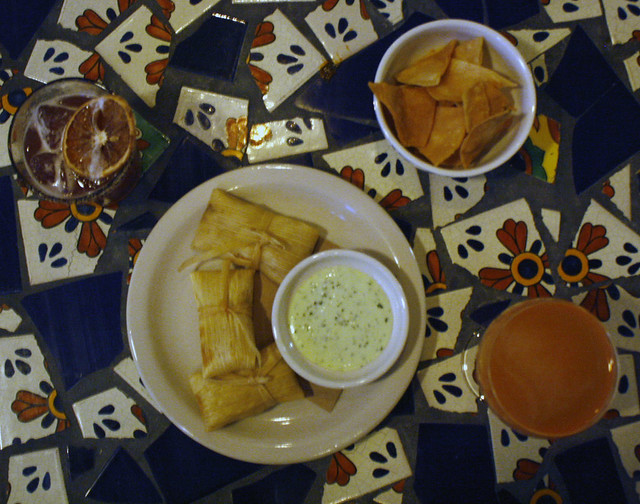 Nestled along Amsterdam Avenue in a quiet section of Harlem, directly across from The City College of New York, Oso serves up classic Mexican street food dishes with a modern twist. The restaurant is quaint with a modern decor that stays true to its roots. The large-scale mural immediately caught my eye as soon as we walked in and I found myself imagining the story it could be telling. 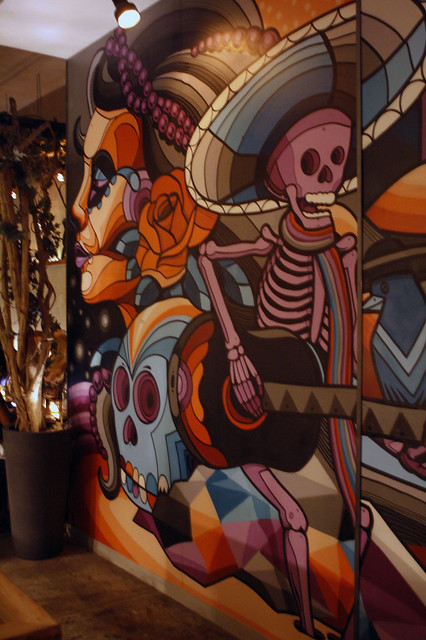 We were greeted by Matt, one of the owners, upon our arrival. He walked through the menu with us, dish-by-dish, and explained that he and his head chef had taken a trip to Mexico, where they were so inspired by the delicious street food that they decided to open Oso. It was clear how passionate he was about the cuisine, which made us even more excited to sample the menu. 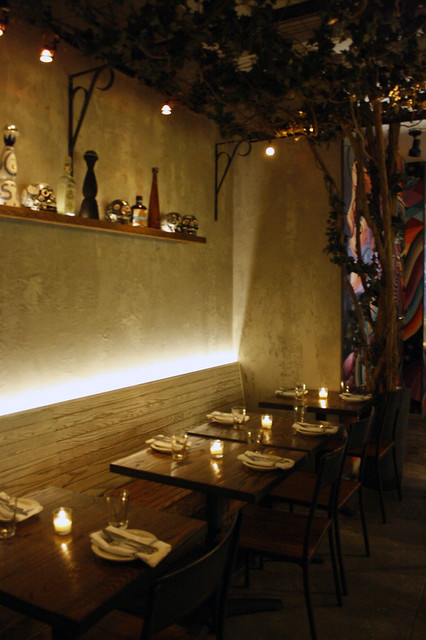 We kicked off our meal with some of Oso’s handcrafted cocktails. I started with a blood orange margarita on the rocks, one of the specials of the evening, while Fields ordered the Coup De Khan.

My margarita was so refreshing, and I loved that it was rimmed with chili salt to give it a bit of a kick. Fields’ bevvie consisted of Vida Mezcal, Aperol, Dolin Genepy, lime, and pineapple. This cocktail was definitely booze-forward, and the lime and pineapple were both lost in the sea of liquor, but we both loved the smokiness of the mezcal! 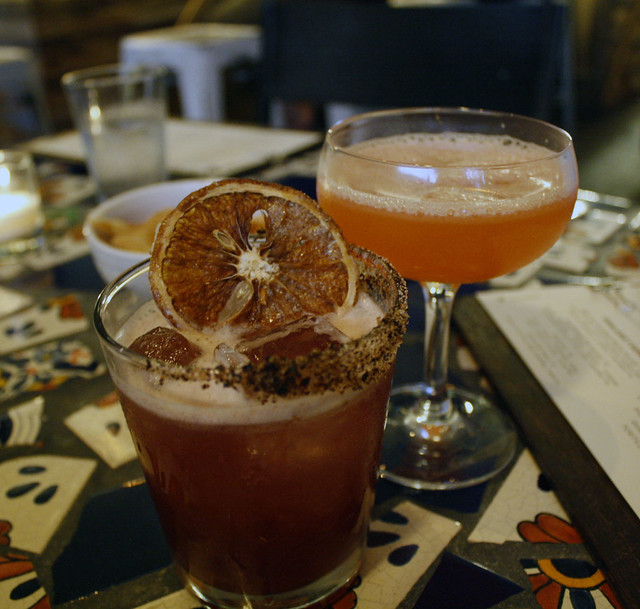 The chips and salsa were so delicious and it was very obvious both were made in-house. The chips were thick cut, freshly fried tortillas while the salsa was an orange red and not chunky at all; it had an almost creamy consistency. We enjoyed that it wasn’t too spicy, but wasn’t mild either and found ourselves munching on it throughout our meal. I’ve found myself thinking of these chips and salsa on a weekly basis since this dinner. 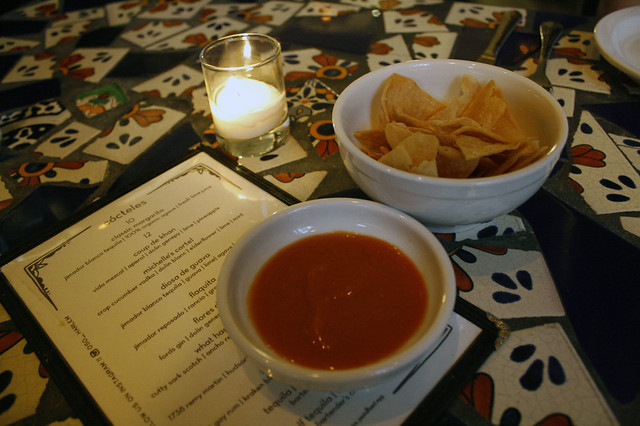 As an appetizer, we shared both the queso oaxaca and roja pepper tamales, plus the charred bean and beet salad. The tamales were miniature versions, but they were a perfect size. We loved that they were tied with a bow, almost as if they were little presents waiting to be unwrapped and devoured. I can’t remember for the life of me what kind of sauce was served on the side, but I do remember that it was so amazing I could have licked the bowl. 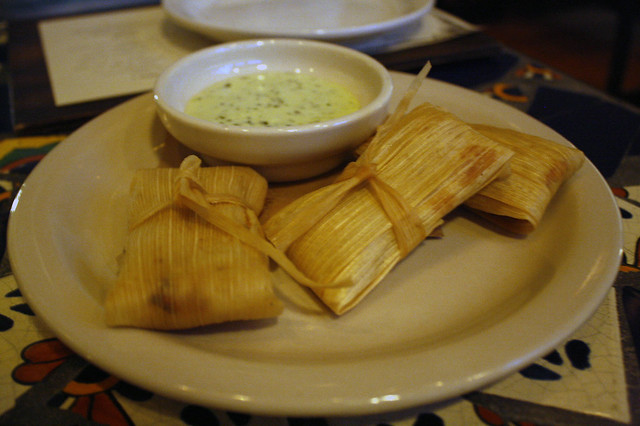 The salad had an argula base and was topped with charred hericot verts, candy cane beets, golden beets, smoked pepitas, toasted sesame, and a sherry vinaigrette. While we didn’t think this necessarily fit in with the rest of the menu, it was delicious nonetheless. The charred beans and smoked and toasted seed gave it an earthy flavor, while the beets provided a hint of sweetness and the arugula was slightly bitter. 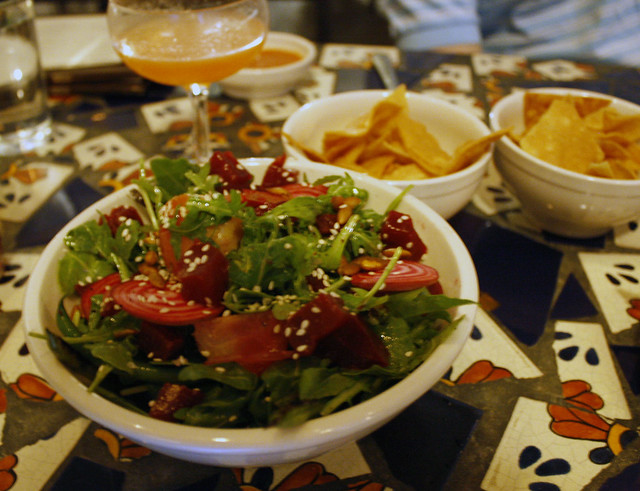 We also shared a few tacos, all of which were Matt’s favorites. The al pastor taco was stuffed with spit-fired pork and pineapple. This was a classic dish, and you can’t go wrong with any taco topped with pineapple in my opinion. However, the pork was a tad dry–a dollop of aioli or guac would have been key.

The carnitas taco consisted of  braised pork, cooked in a soda pop marinade. The meat was tender, juicy, and flavorful. Same with the mole taco–braised chicken was topped with a housemade mole, which was made just the day prior. This was packed with flavor! 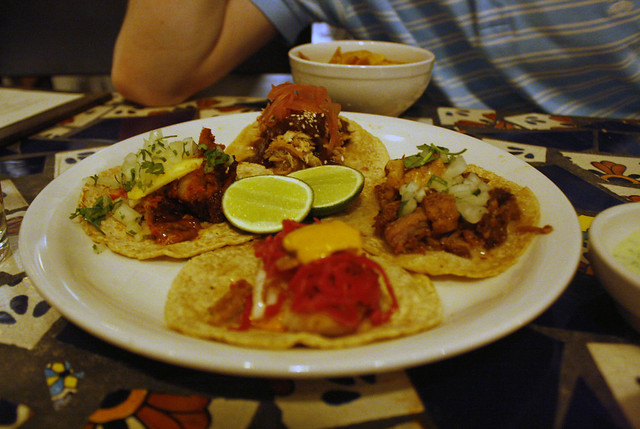 My favorite of the tacos was actually the pescado del dia, or the fish of the day. The freshly cooked fish was topped with a tangy cabbage slaw and a chipotle aioli. We loved that the fish was grilled instead of fried, as it made the taco much lighter. The slaw provided a needed crunch, while the aioli added the perfect amount of spice. 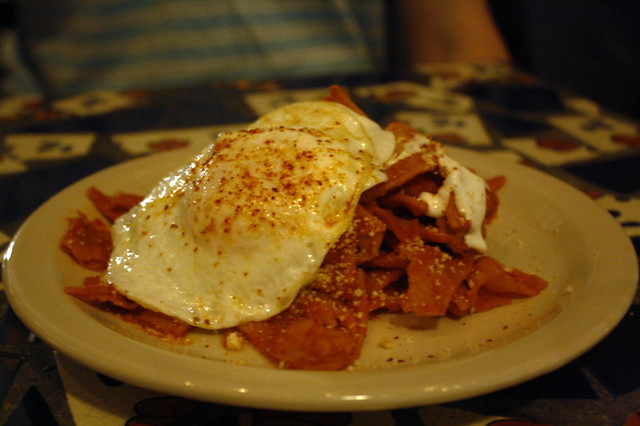 Of course, we couldn’t leave without sampling a dish from Oso’s recently launched brunch menu. Matt suggested the chilaquiles roja, fried tortillas sautéed in a guajillo chile salsa and topped with cojoita cheese, fried egg, and crema. Sometimes I’m not the biggest fan of chilaquiles, as the chips tend to get soggy, but these retained their crunch due to the fact that they were thick and freshly made. I also loved the flavor packed within each bite, which could be attributed to the chips being cooked in the salsa. 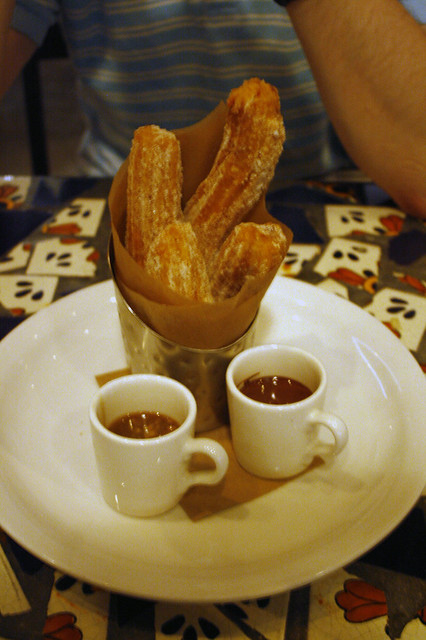 We ended the night on a sweet note with an order of churros, served with melted bittersweet chocolate and a cinnamon caramel sauce. The chocolate sauce was a little too bitter for my liking, but I found the cinnamon caramel to be much more up my alley. You can’t go wrong with fried dough pastries, rolled in cinnamon sugar! 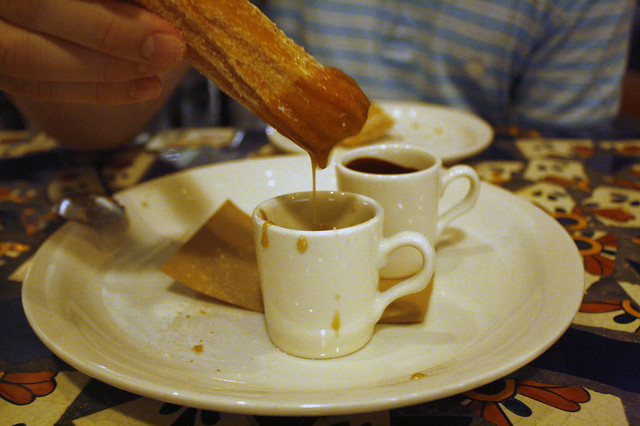 It’s clear that Matt and his crew love what they do, and want nothing more than to bring the true flavors of Mexico to their adorable space in Harlem. It doesn’t hurt that the prices are pretty affordable, which is hard to find when it comes to Mexican food in Manhattan–take it from the Bitch who’s tried a few overpriced places. 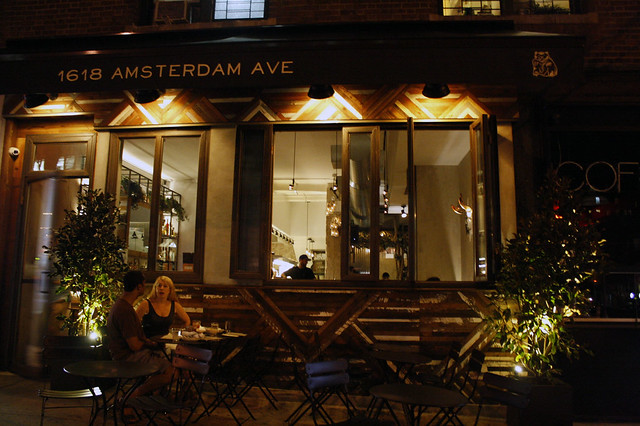 The Bitches say: A. We loved the authenticity that shined through in each of the dishes we tasted. Dinner and cocktails at Oso are Bitch-approved, and we can’t wait to head back soon to try their full brunch menu!

One thought on “Review: Dinner at Oso”