About an inch of snow had accumulated by 10 a.m. on President’s Day, so naturally Washington was a ghost town. Nonetheless, we were determined to find brunch, because it’s rare to have a Monday to yourself nowadays.

I was meeting up with Nicole, my friend from college who has seen me at my worst—early mornings on the soccer field on cold February days; and at my best, which is basically any other time since then. She’s since married and become a new mom, so we sometimes go months without seeing each other. But, when our schedules do sync, we pick up exactly where we left off.

Despite the snow, the brunch gods were in our favor. As we pulled up to Red, White, and Basil, a restaurant located on the corner of the complicated Adams Morgan intersection of Florida and 18th Street, our odds of dining at the vacant restaurant didn’t look promising. Nonetheless, we parked and trekked through the snow, determined to try our luck. There was a gentleman smoking outside of the restaurant, so I eagerly asked him if they were open, to which he exclaimed, “We sure are, come on in!” Yahtzee. 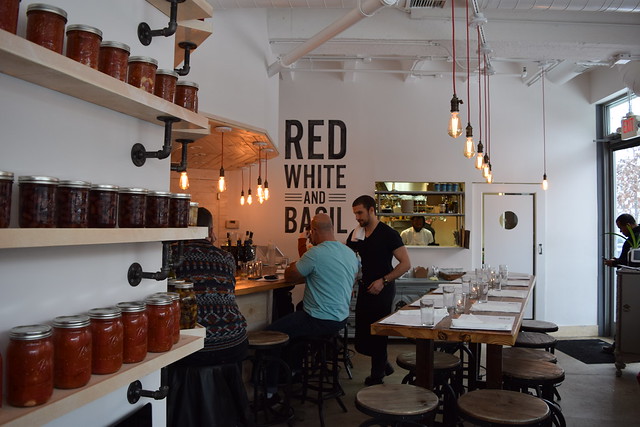 Clearly, we were the first customers of the day, so we had our pick of tables. We chose a highboy table furthest from the door in an attempt to stay warm.

The café is small, but charming, with white tiles and a row of wood highboy tables along the window. The exposed Edison light bulbs, and mason jars filled with pasta sauce adorning the walls, gave the space a chic, industrial vibe. 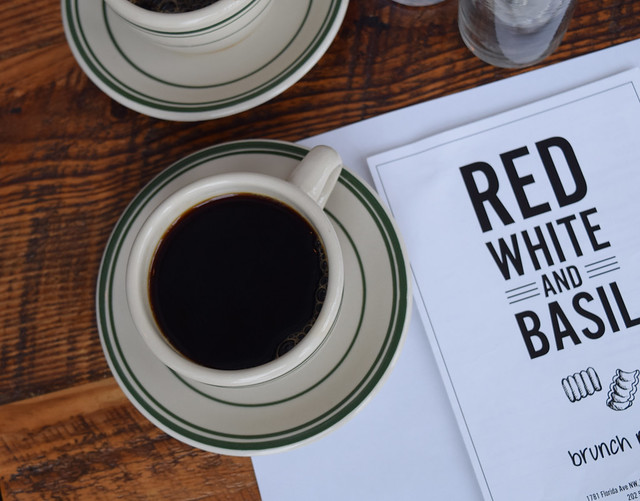 The dining concept is a fast-casual, wine-bar with a menu touting homemade pasta, allowing guests to build-your-own bowl. The dinner service offers a three-course pre-fix for $16.  Although, they were serving lunch in addition to the brunch, we decided to hold off on pasta at 11 a.m.

The service was off to a shaky start, as our waiter was unclear of certain ingredients and unsure of their skim milk inventory for Nicole’s coffee. This initial impression made us skeptical of what was to come.

In the mood for soup, I decided on the carbonara sandwich, with a cup of tomato bisque. Nicole opted to build her own omelet, a similar concept to the restaurant’s noteworthy pasta, and also ordered a side salad.

About 25 minutes passed, which felt like a lifetime given that we were the only diners. I didn’t mind though, because catching up with Nicole is like getting a CliffNotes, stand-up comedy, version of all the realities to come in life: marriage, childbirth, breastfeeding, what to do when someone breaks into your house. She braces me for these events while I stare at her wide eyed, with my jaw hanging on the table.

When our dishes arrived, we were pleasantly surprised! Nicole’s omelet was massive and cooked perfectly. The omelet was made with deliciously fluffy eggs that were stuffed with cheese, spinach, peppers, and onions—and topped with diced tomatoes and pine nuts. 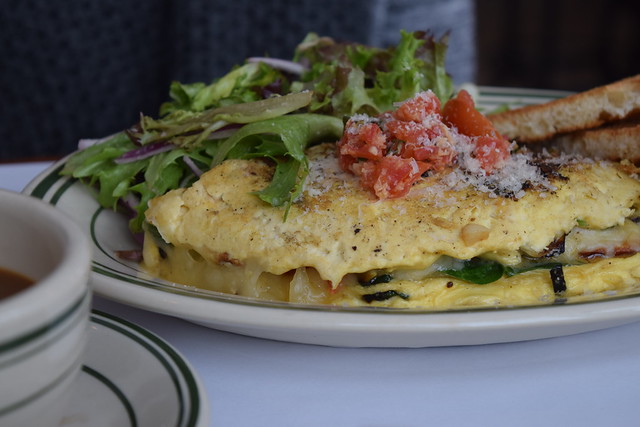 My tomato soup hit the spot. It was creamy and flavorful, the perfect start to a snowy afternoon. I chose the carbonara sandwich because it came with a fried egg, but I wasn’t sure how the Gorgonzola flavor was going to play out. As suspected, the flavor was a bit too strong for the sandwich and in my opinion, didn’t pair well with the egg and pancetta. I was hungry though, so I finished three quarters of the sandwich, although I probably wouldn’t order it again. We enjoyed our side salads, but both agreed that they were dry and could have used some dressing. 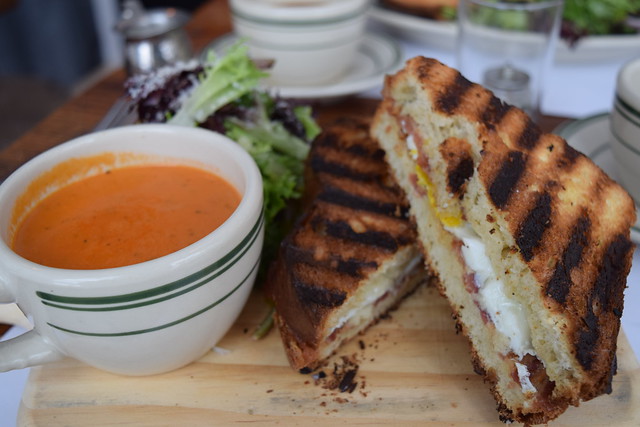 After another round of coffee, the place was filling up. Nicole imparted her last piece of wedding advice, we assembled our layers, and attempted to survive the two inches of snow that had accumulated while we were brunching.

The Bitches say: B-. We love the space, but the service could be better and the food was nothing to write home about. It’s a decent fast-casual option, if you live in the neighborhood.