April 2nd in Chicago was Mother Nature’s April Fools Day. Let me explain: throughout the day, there were scattered snow flurries that would last minutes, even seconds, at a time, and then magically it would clear up and be sunny and beautiful.

The temperamental weather was only escalating my annoyance and disdain for winter, so I decided that brunch was going to be the only thing that was going to brighten my spirits. I decided to go to a spot that I had only been once for dinner and that I had thoroughly enjoyed: Range. 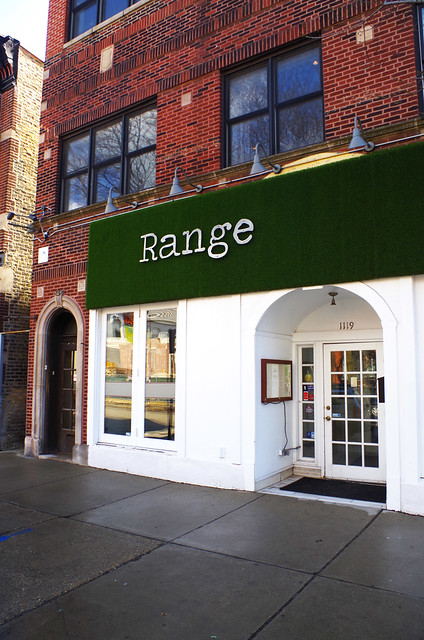 Range is a small, cute, farm-to-table restaurant in Lincoln Park, close-ish to where I live. I had been there for dinner the previous winter, and had been meaning to go back.

Cameron and I decided to go to brunch and got to Range around 11:00 a.m. I was a bit surprised that the restaurant wasn’t brimming with people, but perhaps everyone was staying home for fear of what Mother Nature was going throw at Chicago next.

Cam and I were seated by the bar at a high-top table with a few other couples who were quietly brunching and also remarking on mixture snow and sunshine—I know I keep harping on it, but it was bizarre. 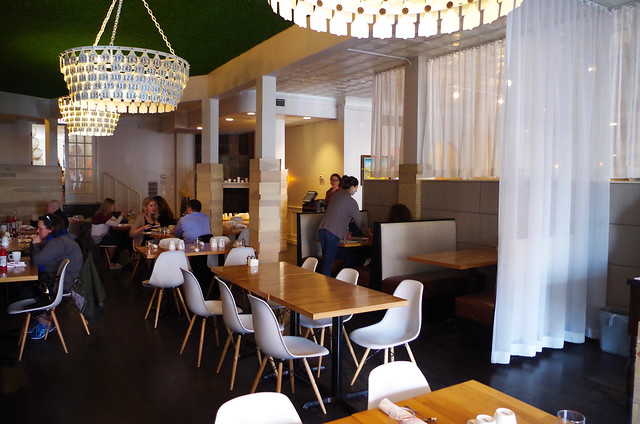 Range is an adorably decorated restaurant—turf on the ceiling, white suede and brown plush leather booths, light oak table tops with white chairs. I love the look, and it makes for a great, casual brunch spot.

One aspect of Range that I really enjoy is that the menus change seasonally, depending on what produce is available. Today just so happened to be the first day of the spring brunch menu, so we were some of the first to try it—lucky us! After my first visit to Range, I was excited for the prospects of what brunch would bring. 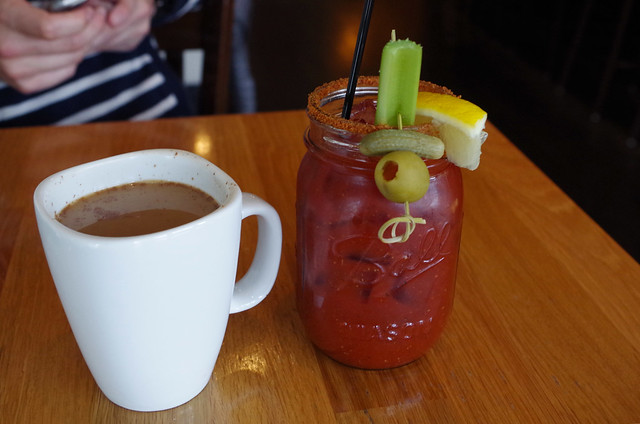 To start, we decided to get some cocktails. Typically for my first beverage, even before I get to cocktails, I normally get a hot coffee. However, on the cocktail menu there was a libation that both a coffee and a cocktail: the spiked mug. I was intrigued and decided to kill two birds with one stone and get my caffeine fix with this—genius right? Well, I was disappointed. The drink came out in a mug, that looked like nothing more than just coffee, sprinkled with cinnamon, and liqueur mixed in.

With something like this, I was expecting something funky—a better presentation for one (perhaps in a mason jar, and topped with whipped cream), and two, something that made the drink worth its price. In reality, I should have gone with the $3 coffee and gotten a standard mimosa for my cocktail. 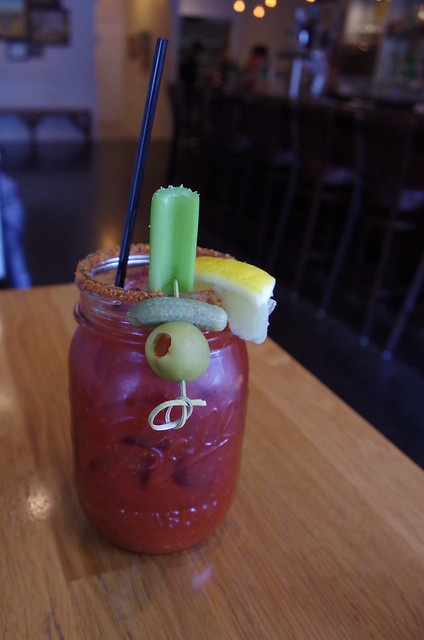 Cameron went with the Bloody Mary. It came in a Mason jar and had the standard adornments of olives, a pickle, and cheese. The mix was delicious and it was just strong enough—it was just right.

Along with having a lackluster start with cocktails, the wait staff was uncommonly tardy and lagged for a long time between delivering our cocktails and asking us if we were ready to order our entrees. By the time the waiter came to see if we were able to ready to order our entrees, I had begrudgingly finished my spiked mug and ordered a mimosa, in the hopes that the second cocktail would redeem Range’s cocktail menu.

When it came to entrees, Cameron decided to try something a bit out of the ordinary, while I decided to try a dish that would be a more “standard” dish—that way we could see a bit of the variety. 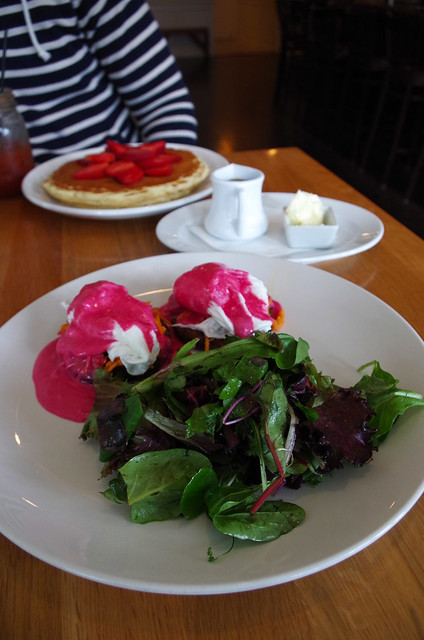 Cameron went with the beet Benedict, which was a very unique take on an eggs Benedict. The dish had carrots, radish, mixed with black garlic, atop a whole grain toasted English muffin. Two perfectly poached eggs were covered in a vibrant beet Hollandaise and a side of mixed greens with a cherry dill vinaigrette.

The dish was well-balanced with all of its adornments and Cameron really liked it stating it was fresh, crisp, and was a creative take on a Benedict. 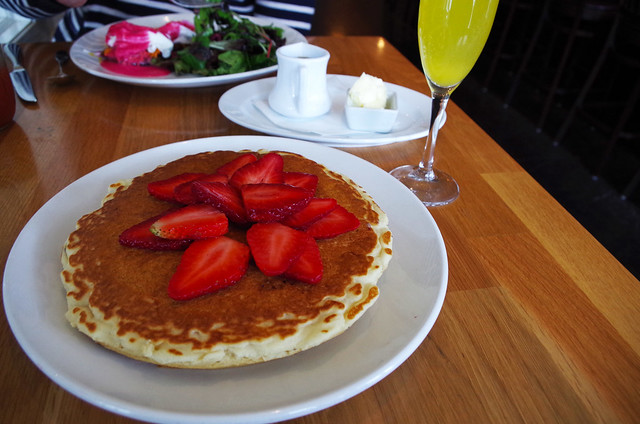 The pancakes were delicious, light and fluffy, and the strawberries were perfectly ripe and added such a great pop of color to the dish. 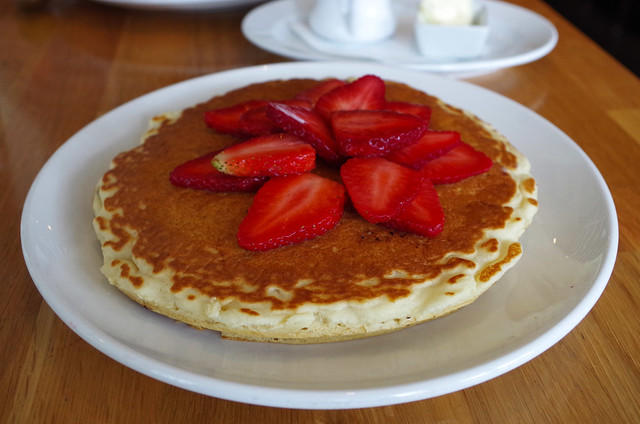 Brunch at Range started out with some hiccups, like the spiked mug and the slow service, but the entrees were delicious. I really enjoy the fact that the menu is constantly evolving so that getting something new and different is always an option.

The Bitches say: C+. Above average farm-to-table food with creative twists that add a culinary mystique. If the service had been quicker, and if the spiked mug cocktail wasn’t such a letdown, I would have awarded them a higher grade.

Range serves brunch Saturday and Sunday from 9 a.m. to 3 p.m.