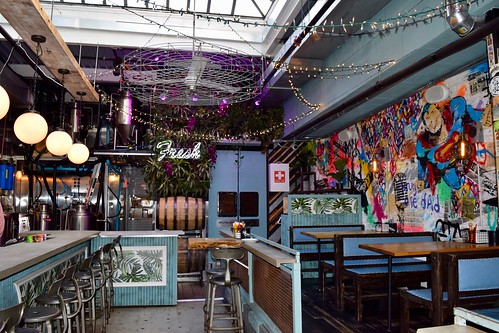 The space itself can only be described as Instagrammable. There are plants on one wall, a neon sign, graffiti, shuffleboards, and banana leaf print as far as the eye can see. We saw more than a few brunchers post up at the bar for a mini-photoshoot. 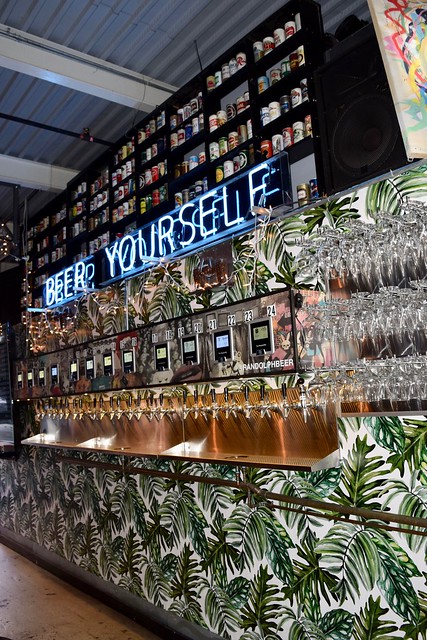 But, this being a nanobrewery and all, my boyfriend and I skipped the 90 minute drinks special and headed right to the serve yourself wall of beer taps. The helpful “charge card” tracks how many ounces you pour and automatically charges your credit card tab. I ordered a (pink!) Graft Cloud City Amber City cider, which was sour and delicious. My boyfriend went for the Mexican Sunglasses, which our waitress described as “like a corona but better.” I immediately realized this would be the perfect place to host a birthday brunch – you don’t have to worry about splitting bar bills at the end!

Randolph Beer’s version of a bread basket includes a pound cake that is so sweet and delicious. I honestly could have stopped there! But that would’ve been a shame since the appetizers are where Randolph Beer really shines. 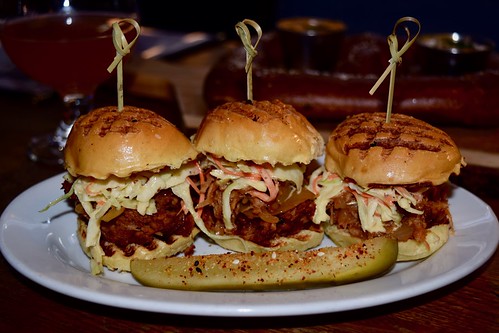 On the advice of our waitress, we began with the BBQ jackfruit sliders. These were modeled after a pulled pork sandwich but were vegan. Normally that’s a turn-off for me, but they were so good and the sauce was so tangy, that if you didn’t tell me it wasn’t pork I wouldn’t have known the difference. 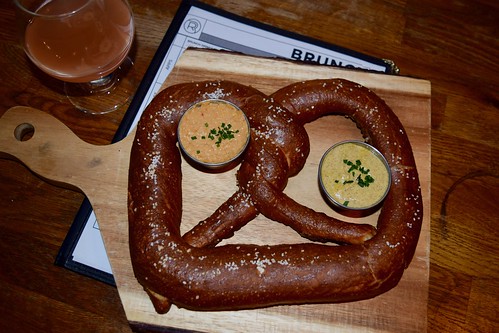 And what would a day at a beer hall be without a big ass pretzel (that’s actually what it’s called on the menu). Crunchy on the outside, soft on the inside, served with mustard and spicy beer cheese… I was in heaven. The portions here are enormous, but this plate was nearly empty when we left. 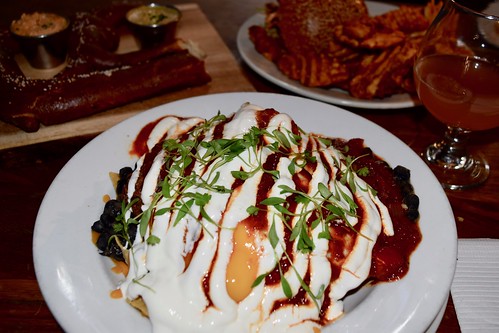 For an entrée, I ordered the “bkfast nachos” with pulled pork. Again, the portion was huge and though too much for me to finish, but this would be great to share with a group. They also came served with (runny!) eggs, which made it feel slightly more like breakfast, though also a bit messier than a traditional plate of nachos. All that said, the pork was too salty for my taste. Next time I would go classic. 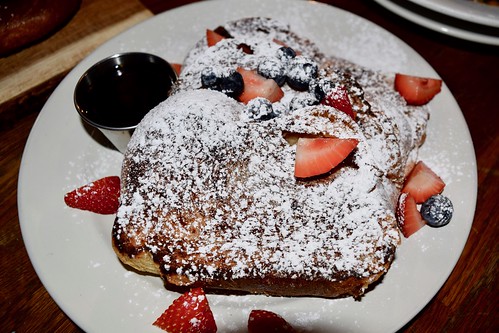 Randolph kindly brought us a plate of their Challah French toast, too. It was very sweet and something in the combination of spices (cinnamon? nutmeg?) made it feel like a Christmas morning meal. It came served with fresh berries, as all French toast should be, which were delicious and easily the healthiest thing on our table. 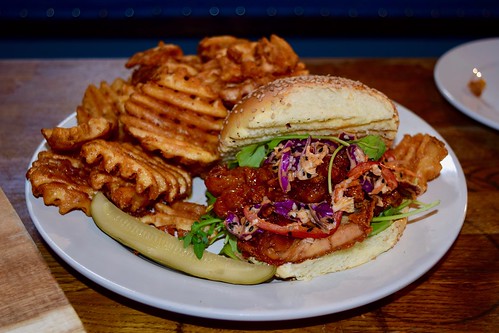 As usual, my boyfriend ordered the best dish of the meal — the Korean fried chicken sandwich came served with a ginger and jalapeño slaw that gives it a kick, but the chicken was juicy and had a crispy fry. The combination of soft bun and crunchy chicken/slaw made for a good bite. This also came with a generous serving of delicious waffle fries. 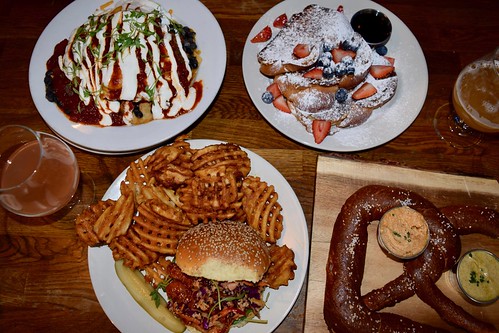 The theme of the day was largesse at Randolph Williamsburg, and it really made me want to throw a birthday party. Apparently I wasn’t the only one with that idea because when we left at 1 p.m., Randolph Beer was already crowded. I wasn’t surprised at all.

With a serve-yourself beer station, massive portions, and a 90-minute drinks special, Randolph Beer WBURG is the perfect place for friends to gather.
Randolph Beer WBURG serves brunch Friday through Sunday, from 11 a.m. to 4 p.m.