Patios and rooftops are always a priority when it comes to brunching in the summer. So, when you’re invited to brunch at a new rooftop, with panoramic views of the Chicago River, the hardest part is waiting for Sunday to come around.

I went to the opening of Raised in late spring/early summer and it was love at first sight. Raised considers itself an urban rooftop bar that sits atop the third floor of the Renaissance hotel on Wacker Drive. I know, you’re probably thinking, “but it’s not on the roof, so how can they call it a rooftop bar”, and you make a valid point, but being on the third floor has its perks. 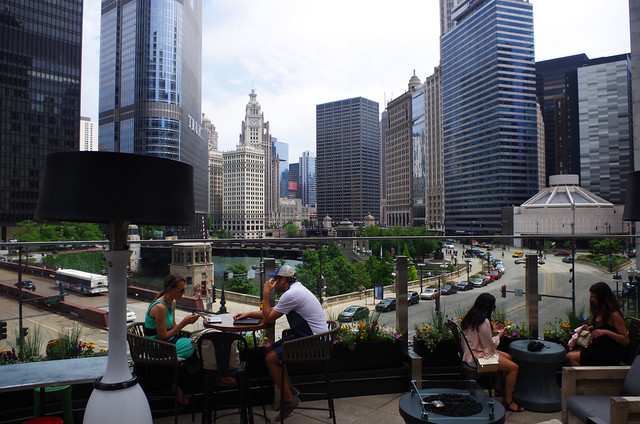 With the placement of Raised on the third floor, it offers patrons the opportunity to take in the view of the Chicago river, and the skyline of the city all in one—you’re not too high or too low, it’s just right! Plus, as opposed to being part of the skyline, you’re in the skyline.

At the official opening extravaganza, I met the manager of the hotel who promptly extended a brunch invitation, once the brunch officially launched in early June. After a couple email exchanges, we found a date and I waited patiently for that Sunday to roll around. 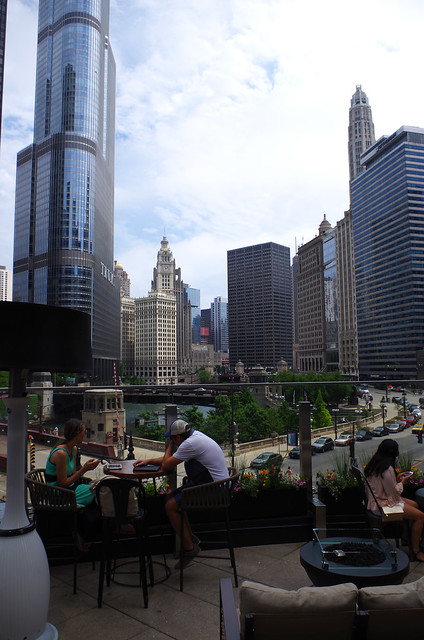 Cameron and I arrived at 11 a.m. on the dot and we were led to a table with the perfect view of the river—the view truly is spectacular. The Chicago river was bustling with boats, the streets were filled with people, and you could see the entire skyline no matter where you turned. Raised has ‘raised’ the bar for rooftop views—pun intended!

As we browsed the menu, we saw a variety of cocktails, entrees, and two fun additions: the Bloody Mary Tool Box and the Mimosa Tool Box. The idea behind the tool boxes is that you get bottles of champagne or vodka, and juices to create your own cocktails table-side. Now, I loved this idea, but unfortunately had to be productive after brunch, so I opted out, but there will be plenty more chances to indulge at a later date. 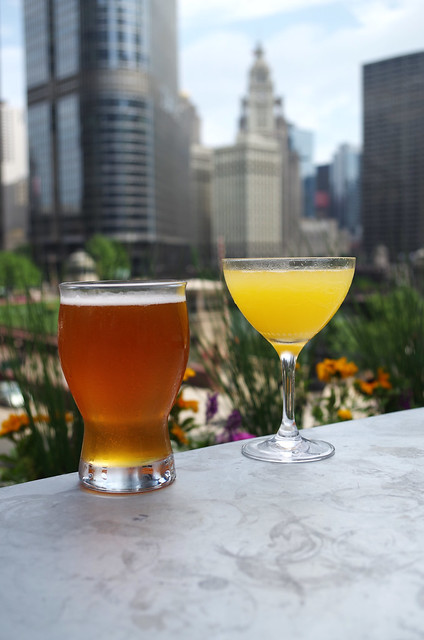 For my first beverage, I ordered a mimosa. It was delicious, fresh, and a nice ratio of bubbles to orange juice. Cameron ordered a locally made beer, the Apex Predator, and he enjoyed it very much—I took his word for it.

As I was looking at the menu to try and figure out what to order, I peered around to see what dishes other patrons ordered. All the entrees looked appetizing, and are great for sharing—perfect for a rooftop, day-drinking brunch atmosphere!

Cam and I put in our order for a few shareable dishes. It seemed as if we waited for quite a long time for our food—thankfully, we had the beautiful view to keep us occupied. 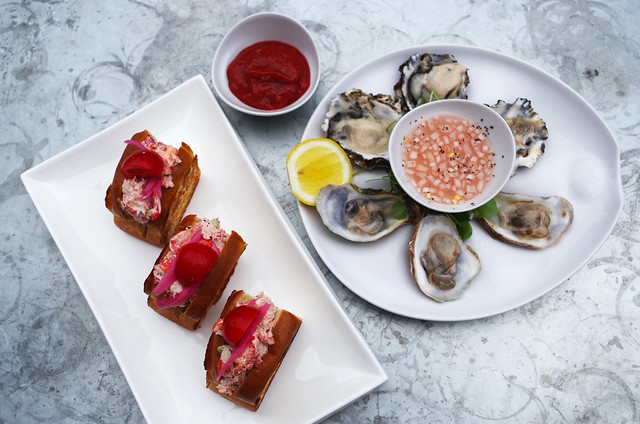 The first two entrees arrived, and we chose the lobster rolls and oysters on the half shell. 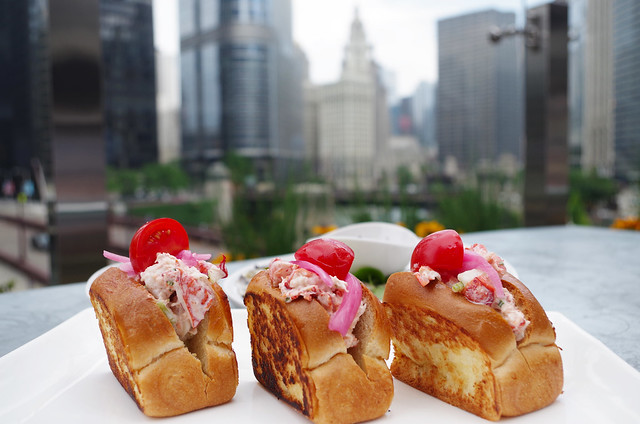 The lobster rolls were adorable and delicious! The rolls were buttery, and there was quite a bit of lobster in each of the mini rolls. This was the favorite of the dishes we ended up ordering, and the three mini rolls might probably be enough food to be considered a meal for one person.

The oysters on the half shell were good, but not the best. The six oysters (three east coast, three west coast) came with cocktail sauce, champagne mignonette, and fresh lemon wedges. I am accustomed to a bit more information as the oysters are presented, i.e. having the varieties pointed out, but we didn’t receive that from our server. If you’re an oyster expert, I recommend passing on the oysters.

Next up was another round of cocktails and two more dishes! 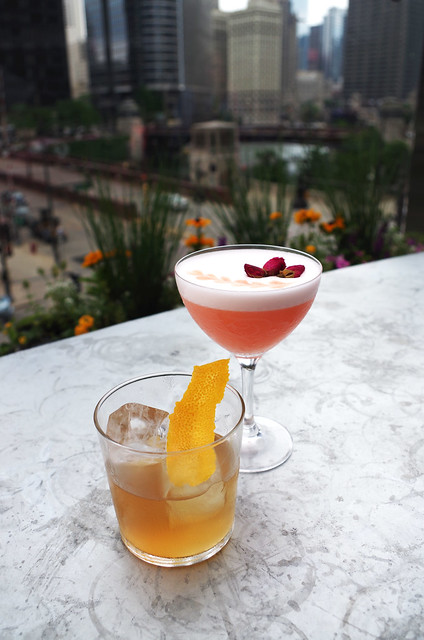 Both of our cocktails were delicious but we were left wondering, after 30 minutes, why our food wasn’t served yet. While the drinks from the bar were swift, the food from the kitchen was not.

For dishes three and four, we ordered the bagel chips topped with lox and the egg scramble. 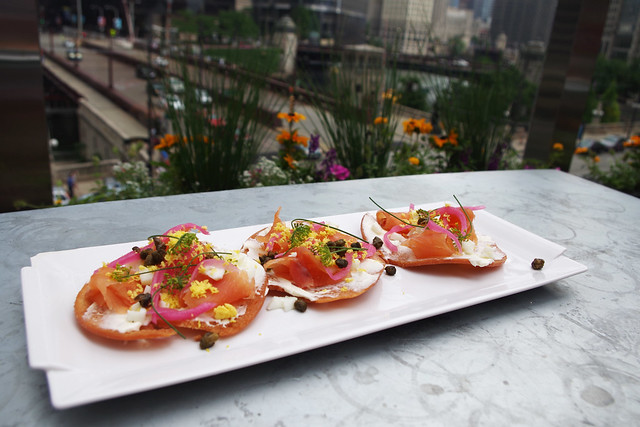 The bagel chips and lox were delicious, a fun twist on the classic. It was large bagel chips with diced hard boiled egg, red onion, capers, dill, cream cheese, and lox. The dish was light and delicious. This was easily our second favorite shareable entree of the brunch. 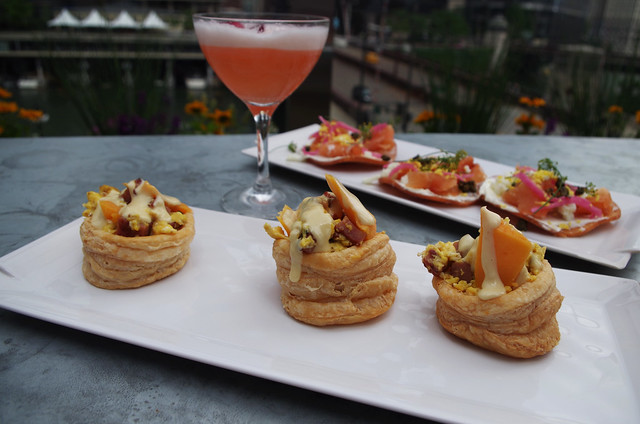 Next up were the egg scrambles, which had eggs, fried mortadella, aged cheddar, dijonnaise, all within a warm and flaky puff pastry. 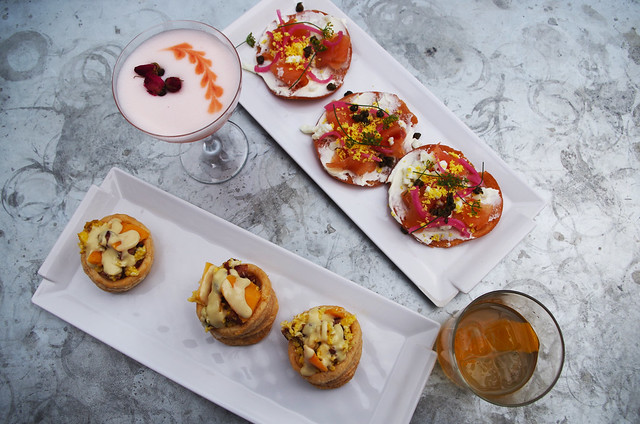 All in all, barring the slow service for our food, Raised is a great spot to take in a beautiful view with cocktails in hand. I would absolutely recommend going for happy hour, cocktails, and even for brunch, so long as you’re really hoping for a “liquid brunch”. The Bloody Mary Tool Box and Mimosa Tool Box will be next on my list of things to try at Raised!

The Bitches say: B. The view is really what you’re paying for at Raised, and it’s completely worth it!