There’s nothing like a little friendly competition during brunch. Unfortunately, we’re not referring to your ability to put away double-digit glasses of mimosas each weekend. I’m talking about old-school competition, the kind where you’re allowed to continuously boast your ability to bowl a turkey or achieve the highest score in pinball for years to come. 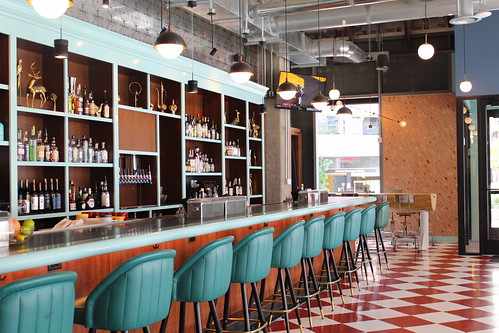 Punch Bowl Social can fulfill those needs, and also provide delicious food and drink to snack on in the process. The restaurant-arcade hybrid invited us for brunch at their Arlington location, and now a part of me knows I’ll be struggling to sit through any future brunches without the promise of skee-ball afterwards.

My friends Justice and Mary Ellen were my company in tow for the afternoon, and we all arrived excited to see what the hype was about. Our server, Bre, was a Punch Bowl Social encyclopedia, and so we gave her free range on steering our brunch and cocktail order. One thing Punch Bowl Social prides itself on is their appeal to the non-drinking crowd as well. Mocktails have always been around, but as of late the trend has steadily become more popular. Whether you’re a fan of liquor-based beverages or not, take heed of Punch Bowl Social’s diverse menu. 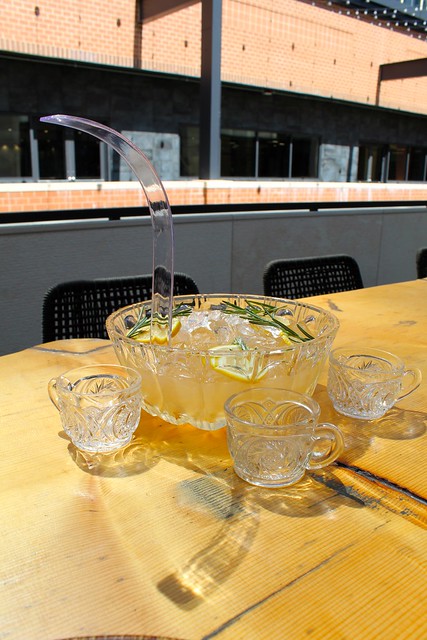 You obviously can’t dine here without having a bowl, so Bre insisted we start with the “connoisseur’s cup.” A combination of gin, Teakoe Kodiak Mountain’s mint tea, house-made lavender syrup, Dolin Blanc and fresh lemon juice, we especially loved how there were sprigs of fresh rosemary and lime in the drink itself, contributing to overall flavor. While we appreciated their efforts to keep the drinks cool in the sweltering Indian Summer heat, we decided the excessive amount of ice cubes in the bowl watered the drink down too much. 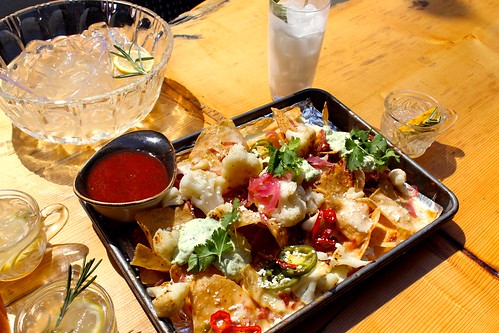 If you haven’t already gathered from my previous reviews, nachos are one of my favorite foods. I’ve never met a plate of nachos I didn’t like, and the cauliflower nachos at Punch Bowl Social took my breath away. Topped with jack queso, jalapeños, cauliflower, pickled onions, and jalapeño lime crema, the corn chips are crisp with each bite, and the cheese was evenly distributed. What really steals the show are the pickled onions, which I would never think to include as a topping. Don’t be put off by the cauliflower. It actually added another depth of texture to the plate, and if you’re an optimist like yours truly – you know they are part of a balanced diet! 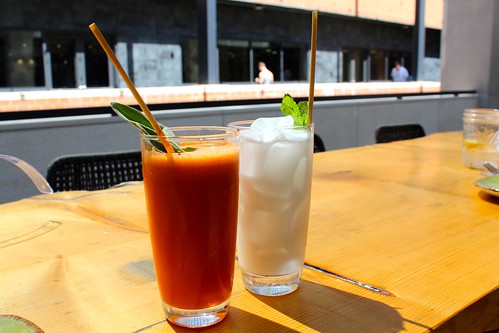 Bre noted that one of her favorite non-alcoholic juices on the menu is the Jessica Rabbit, which is a blend of carrot, ginger and apple. Another one that caught Justice and Mary Ellen’s eye was the Coco Fresca, a mix of coconut milk, coconut water, simple syrup, sparkling water, and fresh lime juice. In between our appetizer and entrée, we decided to sip on those, and we all agreed it was the right way to jump-start our metabolism for the remainder of our experience. Carrot is the main ingredient in a Jessica Rabbit, but given how watery the vegetable can often taste, the ginger really brings it to life. With each sip came a delightful sigh and an urge to ask for the recipe. 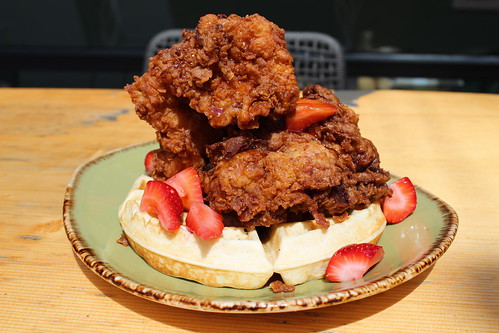 Choosing a main course was tough. With a plethora of plates that cater to different palates, the decision was not easy. Thankfully, Bre was able to alleviate some of that pressure by suggesting her favorites. We went with the chicken & waffles to share and then we all ordered individual entrée. I selected the roasted chicken tacos while Justice and Mary Ellen, respectively, settled on the shrimp burger and the mushroom biscuits and gravy. 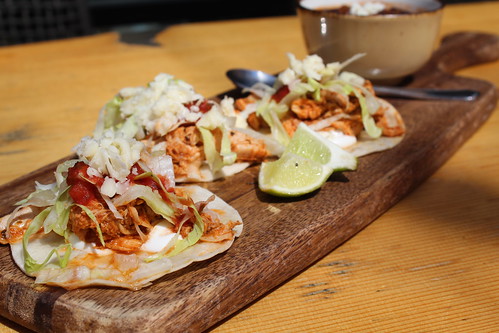 The tacos, to start, were fantastic. The portions are substantial and the toppings cohesive. There was a minor element of heat and I couldn’t determine the source, but it wasn’t so aggressive that it overpowered the chicken, crema, and Monterey jack cheese. 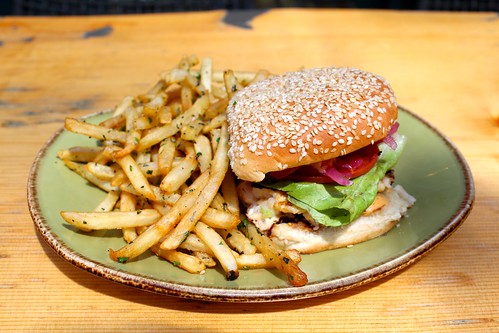 One bite into her burger and Justice was hooked. Imagine your favorite crab cake sandwich but with shrimp. Although messy to eat, the patty was moist and the Old Bay mayonnaise gave it a local, coastal feel. We remarked that surf shops in California or Hawaii would carry this exact item. The rosemary fries were a smart touch. Thin, crispy sticks of carbs generously sprinkled with fresh herbs and flaky sea salt were just fine on their own without the addition of condiments. 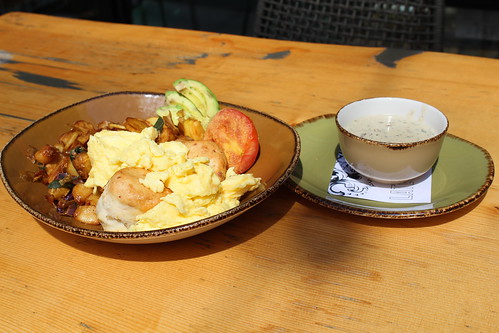 Mary Ellen couldn’t get enough of her biscuits and gravy. The real star was the sauce, which is loaded with chunks of white mushroom so it renders an earthy aftertaste. It’s a hearty platter that encompasses various cravings. Eggs for the protein-conscious and crispy potatoes for those looking for something to soak up the alcohol. The buttermilk biscuits crumbled with ease but still maintained their structure once we poured the gravy. As we powered through our meals, we were treated to another cocktail, this time some personal favorites from our bartender. 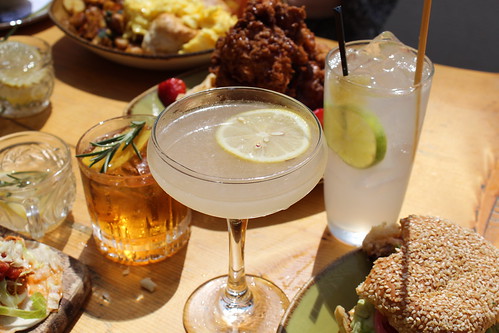 El Diablo is a blend of El Jimador Reposado tequila, Giffard cassis, fresh lime juice, and ginger beer. Imagine having a Moscow mule but with tequila and you get the “el diablo.” The intense black currant that makes up the cassis is more than just a liquor. It forms the backbone of this cocktail and delivers a memorable, tangy aftertaste. The poignant floral notes in the lavender sour can only be attributed to the house-made syrup. But, the pairing of dry gin was strategic, nonetheless. Finally came the Boulevardier; Old Overholt rye whiskey, Campari, and Punt e Mes vermouth. It’s a complete shift from your typical brunch libation, but if you want to drink like you’re spending the afternoon in a speakeasy, this is perhaps the cocktail for you. 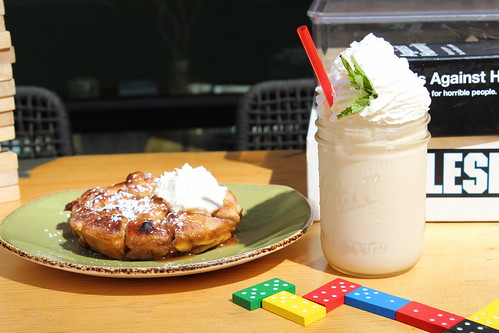 We were satisfied, but never too stuffed for dessert. We all concluded the monkey bread was in our future, and Bre casually suggested a final cocktail to go with our dessert. I ordered a vanilla milkshake spiked with liquor and Justice asked for an espresso martini. 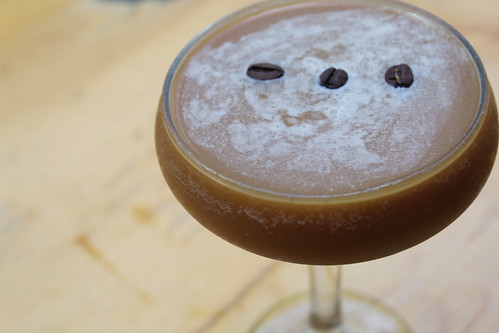 It was an unanimous decision: the espresso martini was the best we’ve ever had. We couldn’t get over how naturally frothy it was but surprisingly didn’t have a drop of dairy. It wasn’t overly sweet and served as the perfect energizer to set us up for a busy afternoon.

A spread of options for the health-conscious, sober friend, or seasoned bruncher, Punch Bowl Social Arlington is the newest spot to see and be seen. D.C. diners take note: they’re opening a second location in Navy Yard at the end of this year.