I love visiting Chicago. Whenever I make it to the city, I always try to have brunch with my sorority sisters; a few of them made the move from Missouri to Illinois after college.

This time, we wanted greasy comfort food in River North, as one of my girlfriends had spent the evening prior dancing the night away at the Lady Gaga concert. I wanted to check out the Murakami exhibit immediately afterwards (it’s incredible, by the way).

Public House seemed to be a good option—centrally located, and with plenty of spacious booths for us to spend a few hours in, catching up over Bloody Marys and burgers. The girls took various trains or cabs, and we all converged on State Street. 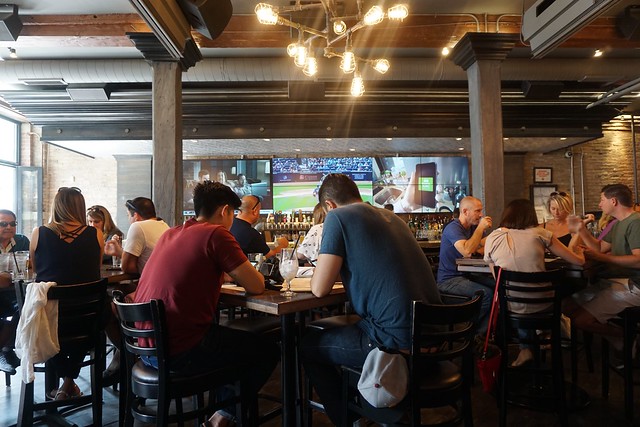 The restaurant is a big sports bar, with one side of the restaurant blasting giant screens from above the bar. It has a lovely patio outside, with tables facing the busy street. And there’s even a DJ in a booth at brunch—you can tell this place becomes quite crowded in the evenings.

We snagged a large U-shaped booth next to the DJ. The table had a set of taps installed into it, making it ideal for beer-guzzling sports watching. Instead of beer, though, we dove into the brunch cocktails menu. 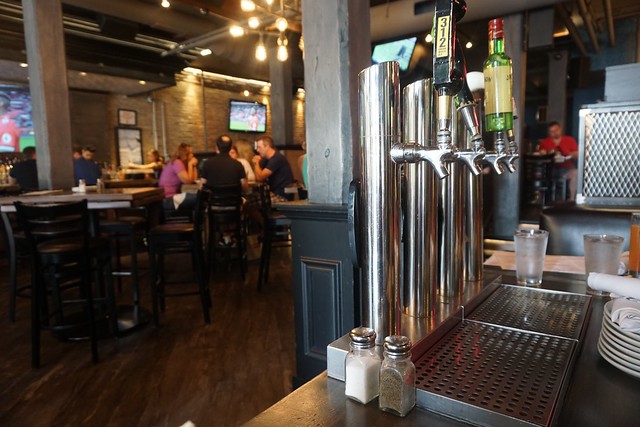 Public House has a “pick and pour” mimosa option, which gives a table plenty of variety: bubbles, orange juice, three flavors of puree (you pick two), and skewers. You simply pay for the bottle of bubbles (Veuve for $150, a more modest prosecco for $50).

I was dying for a Bloody Mary, though. Public offered a nice one, served ice cold and with a massive skewer. The drink was good, and the skewer served as a pre-appetizer appetizer unto itself—all that mozzarella, bacon, a pickle, even an entire chicken wing and bourbon-glazed jump shrimp. 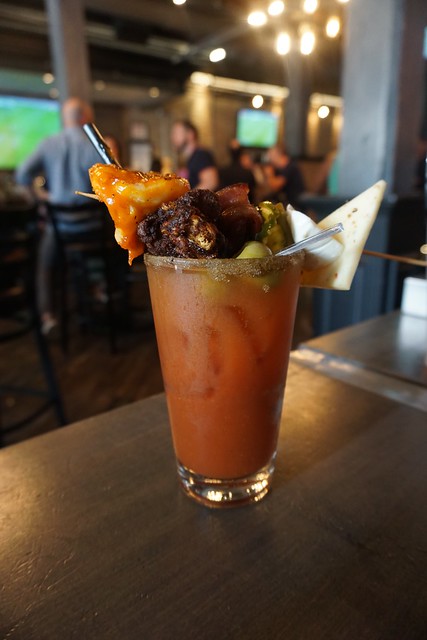 She of the Lady Gaga hangover appreciated the “Revival Shots” that were on the menu. Weekend warriors are encouraged to get all three, but we stuck with one, the Pick Me Up, made with vanilla vodka, Kahlua, and a house espresso foam. That’s one way to get brunch started. 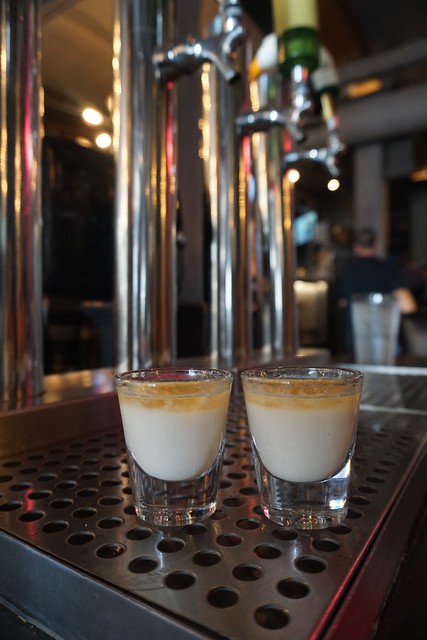 Our adventurous friend ordered the tuna poke. It was ahi tuna with avocado, scallion, jalapeños, and a mango sesame glaze. She said it was decent, and finished the dish, but I wouldn’t venture to eat poke at a sports bar. It looked a bit off-color. 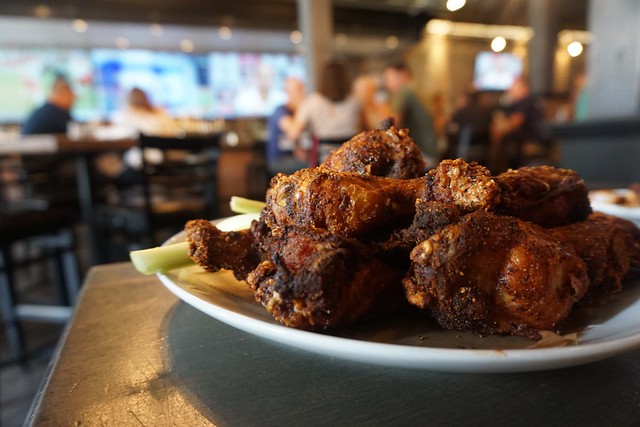 The brunch menu is enormous, and there’s definitely something for everyone: savory eggs dishes, barbecue options, tacos, flatbreads, sweet brunch dishes and, of course, soups and salads. It was almost too overwhelming to decide.

I was craving barbecue, per usual, and asked our server for her recommendation. She steered me to the Wagyu brisket sandwich with dip. It sounded amazing, but was ultimately a bad call. I wanted juicy brisket that would pull apart; instead I got a dry sandwich roll stuffed with fatty brisket covered in melted Swiss cheese. It was too fatty, too cheesy, and not meaty enough. 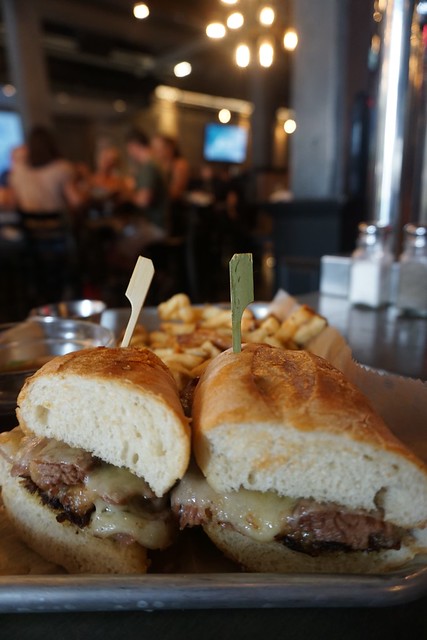 The taco menu serves up your choice of skirt steak carnitas, Baja fish, or braised chicken. We went with the carnitas, which arrived open and covered in onion, cilantro, Oaxaca, and salsa verde. They certainly weren’t very pretty, but they were consumed with approval.

The fried fish sandwich arrived looking like a juicy burger. It was whitefish on a sesame seed bun. This was definitely the heartiest of the dishes. The fries were spilled out onto the trays next to the sandwiches, and arrived slightly cold. 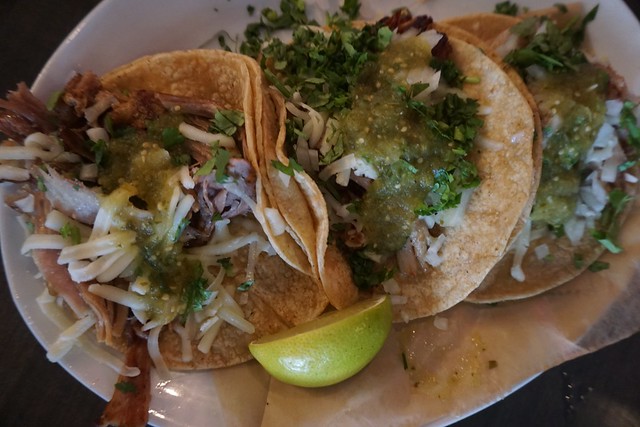 The savory brunch menu had a few great options. The queso fundido egg burrito was packed with ingredients—everything from chorizo to cheeses to eggs to peppers—but arrived a little soggy, leaking its juices everywhere.

The crab cake benedict had garlic spinach and a tasty hollandaise, but there wasn’t a ton of crab to be had. We caught up over these dishes, and continued to try all of the various mimosa and Mary options as we chatted.

During our catch-up, we kept noticing huge, colorful milkshakes being brought out of the kitchen. We had to have one, if only to take a photo of the monstrosity. So we ordered both the chocolate and vanilla options. 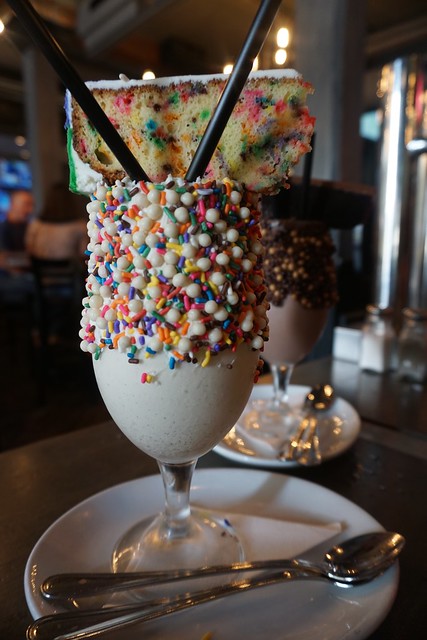 The ‘cake shakes’ are gargantuan, and served with both spoons and straws. Inside, a creamy milkshake, and on top the glass was glazed with colorful candy and topped with a thick slice of cake. It was quite the dessert, and the dryness of the cake was fixed by dipping it into the milkshake.

Overall, the brunch was fine. We were too busy chit-chatting to focus on the greasy food. But grease, after all, is what we came for.

It was the service that was really lacking at this spot. Busy sports bar or no (and let’s be real, football season hadn’t started by this brunch), it was hard to snag a server’s attention, even though we were sitting in a prime booth. 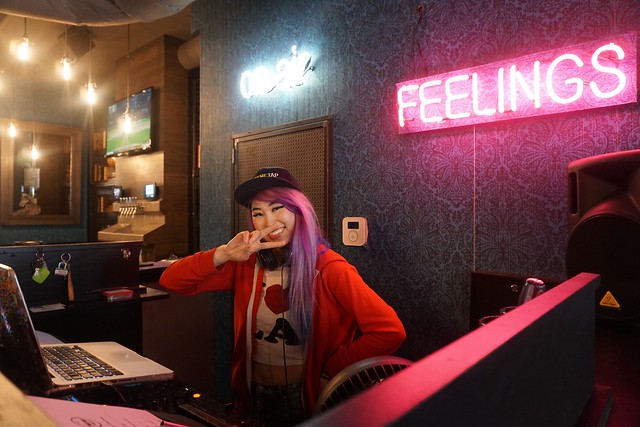 The service cherry came when a busser dropped a huge tray of glassware next to our table, leaving a few of us injured. The service scattered and it took me howling for a manager for them to even acknowledge what had happened, never mind get us some Band-Aids.

It was a rough end to a mediocre brunch, and we all left limping, our tummies hurting from all the greasy food and bubbles.

Public House Chicago is open for brunch at 10 a.m. Saturdays and Sundays.