To be completely honest, I frequent the EatWell DC restaurants—Commissary, Logan Tavern, and the Pig—out of convenience, as they each lie within a few blocks of my home.

I don’t visit Logan Tavern nearly as often, but I’m regularly at Commissary. The expansive menu with healthy and not so healthy options, plenty of seating, a casual atmosphere, and affordable prices make it my go-to for happy hour, lunches, and takeout. And as I’m a terrible cook, I’d probably starve if not for Commissary. (They know my takeout order by the sound of my voice. And I like it.)

The restaurant group’s values of sourcing local, because it’s better for the environment and better for you, also align with my ethics. Bet you didn’t know that much of the restaurants’ produce, meat, cheeses, and dairy all come from local farms and purveyors, including their own farm in Maryland. And, they work to do it at prices far lower than many other restaurants that do the same. This is less important to me—as I’m frivolous with funds—but something I think we can all appreciate.

The Pig focuses on seasonal, local fare—and using the whole animal (from nose to tail!) as both a culinary experience and effort at increased sustainability. (As the population and consumption of meat increases, we could all do well to eat other parts of the animal and fish to ensure things don’t go to waste.) We’ve enjoyed the Pig’s Nose-to-Tail dinners in the past, and we saddled up once again the bar to grab a drink before embarking on a Pig’s Tale.

A Pig’s Tale is the Chef Michael Bonk’s latest exploration into the different parts of the pig.  The five-course meal takes the diner through the different cuts and textures of pork, for $38 per person.

I was with my girlfriend Lauren, and we both love to dine and try everything. So we had our share of wine and whiskey cocktails, and a few of the regular menu items, before we continued on to the Pig’s Tale menu.

When dining at the Pig previously, I’ve been impressed with the “Big Pig” cheese and charcuterie board, and the burger, which was part pork and part beef patty. Both dishes were hearty, delicious, and incredibly well done comfort food. 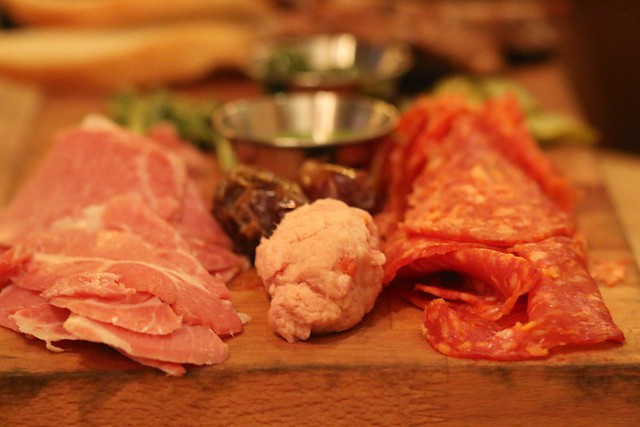 This time around, we shared the local heirloom tomatoes and burrata salad, topped with Balsamic vinegar and olive oil. It was incredibly fresh and the perfect summer salad to enjoy out on the patio. 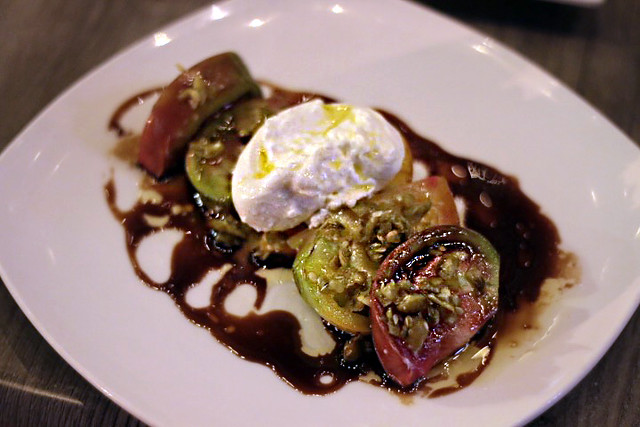 Next up, the pork belly tacos, which were just as spectacular. The pork belly was crispy on the outside, fatty and moist on the inside—and just perfect. It was prepared Asian style, with cucumbers, cilantro, and on a dense, hearty bread roll. 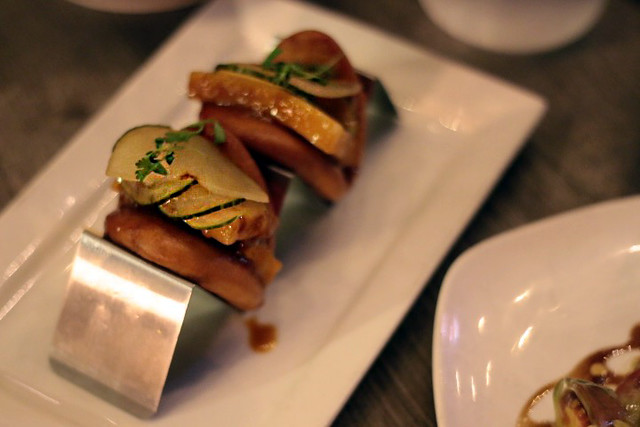 We also loved the gnocchi, a creamy ricotta and potato gnocchi served with fresh wild mushrooms—pretty much my favorite decadent dish, and this was a heavenly variation. I’m a sucker for wild mushrooms and cheese, so this was my heaven.

We were incredibly pleased with the standing menu items, and we still had to work our way through the Pig’s Tale, which was arriving in waves. We opted to share the portion for one and try everything and the kitchen staff was A-OK with that plan.

The first course of the Pig’s Tale was an amuse bouche of watermelon jerky, with a small square of proscuitto, nestled atop a cherry tomato. The next course was a cured foie gras served atop a beet spread with a sesame seed crisp. The foie gras was decadent, and I appreciated that it was served in a fashion apart from the normal foie gras you spread atop bread, French style. This was great, and far more light. 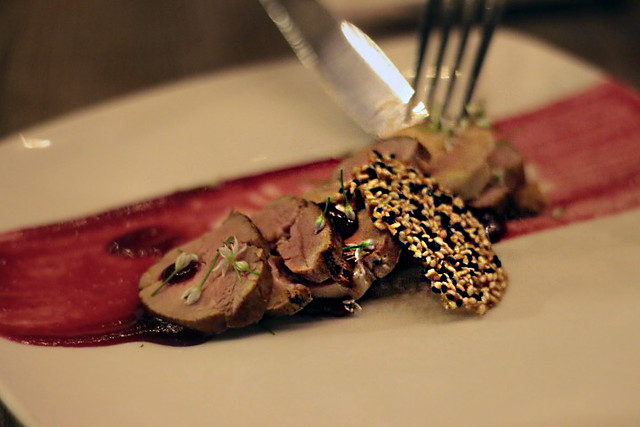 Our favorite course of the Pig’s Tale was the pork and veal polpettes, which were meatballs topped with a smoked tomato sauce atop of Anson Mills grits. It was hearty, decadent and heavenly. This was a great dish, begun with beautiful ingredients and executed perfectly. 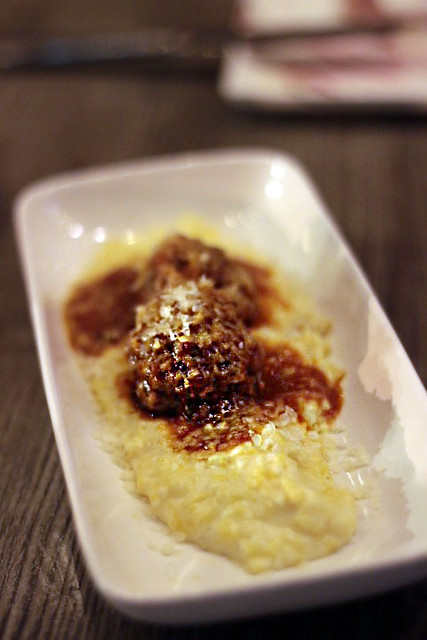 The final course of the Pig’s Tale was the poached pear, which was a half of a bear with vanilla ice cream ricotta, and topped with crumbled nuts.

We also ordered the sticky toffee sundae, because the only way to make a sundae better in my book is by adding whiskey and toffee. This sundae, which was more of a milkshake, did just that. The milkshake was vanilla ice cream, toffee sauce and overholt rye cream. I appreciated that it was in a milkshake glass, making it difficult to share and enabling me to oink down the whole damn thing. 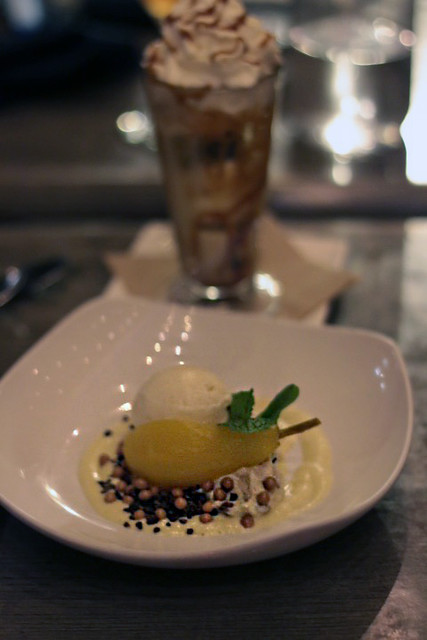 All in all, we enjoyed the Pig’s Tale but preferred the classic menu items at the Pig, and will be bound to return either way. Last but not least, it’s worth noting the EatWellDC team are opening up another, similar premise: The Bird, which focuses on untraditional fowl, such as guinea, hen, and using unconventional parts of the chicken. They’ll be doing a pop up of the Bird at the Pig on September 17 and 18—in case you prefer chicken to pork!

The Pig is open for dinner daily and serves brunch on Saturdays and Sundays.