Quality late-night food joints can be hard to come by in the District, if you’re not in the mood for fast-casual. So, naturally, I was excited when I was invited in to try 10 Tavern, the new sports bar across the street from the Verizon Center, in the space that used to be occupied by RedLine.

10 Tavern is a modern sports bar, with plenty of high-definition TVs, and a ticker board with event scores, betting lines, and upcoming game times. Upon arrival, my friend and I were greeted by the super friendly staff and took our seats at a high-top table at the center of space with a great view of the big screen and the bar. 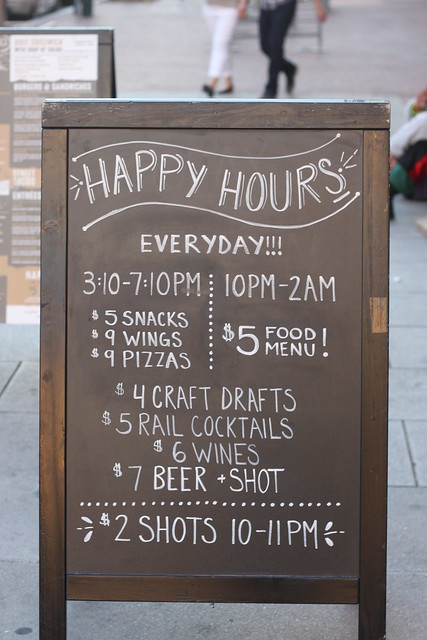 The first things on the menu that caught my attention were the happy hour specials. Everyday, 10 Tavern has happy hour from 3:10-7:10 p.m., featuring deals like $4 craft draft and domestic beers, $5 select cocktails, $6 glasses of wine, and $7 for a beer and a shot. Snacks are $5 and wings and pizza are both $9. 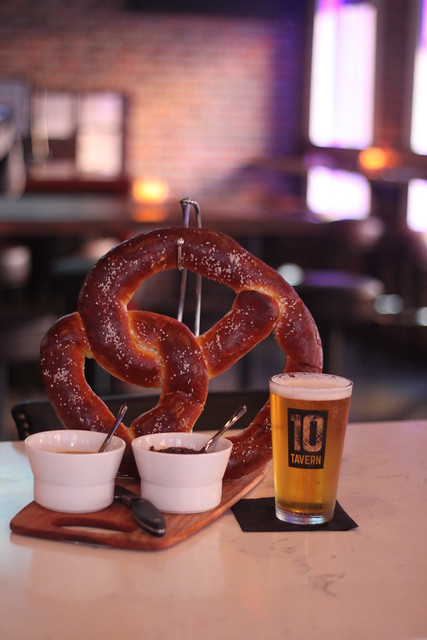 The late night menu runs from 10 p.m. to 2 a.m., kicking off the first hour with $2 shots. You can get the same drink specials, plus $5 burgers and sandwiches. So if you need to find me late night on a Saturday, I’ll be chowing down at the bar.

We kicked it off with the house draft, the 10 Tavern pils, which is brewed in Maryland special for the bar. It’s a light pilsner, was easy to drink and went well with our appetizers, especially the pretzel. I love a big pretzel, so I had imagined a ballpark-size soft pretzel. Turns out, the “twisted giant Bavarian pretzel” should really be called the “big ass pretzel,” as one waiter described it to us. Thicker than most pretzels you’d find in a German beer hall, it’s large enough for 3-4 people to share. The homemade peppercorn maple mustard and bacon onion jam for dipping were fantastic. We actually took both of the sauces home to put on other leftovers.

I was intrigued by the Buffalo chicken deviled eggs, although they ended up being exactly what you’d expect. It’s a buffalo chicken tender stuffed into a deviled egg. The creamy filling neutralized the hot Buffalo sauce nicely.

We also tried the mushroom potstickers. The Sriracha on top was a little overpowering, but we appreciated the veggie dumpling all the same. 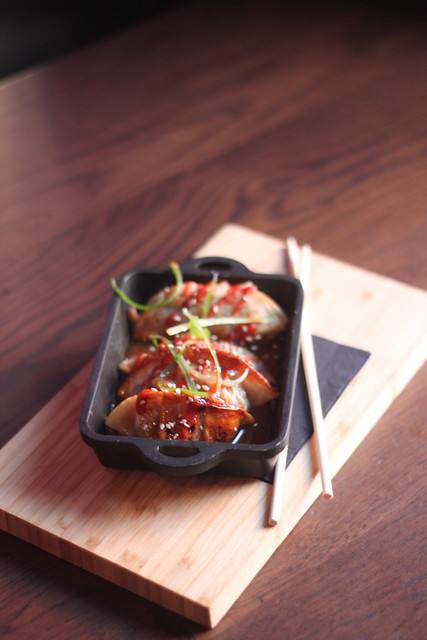 In need of another round, we switched to cocktails. I tried the Spy Who Left Me, made with Bulleit bourbon, pineapple sage simple syrup, pineapple, and club soda. It was strong but delicious. I would definitely order this cocktail again. 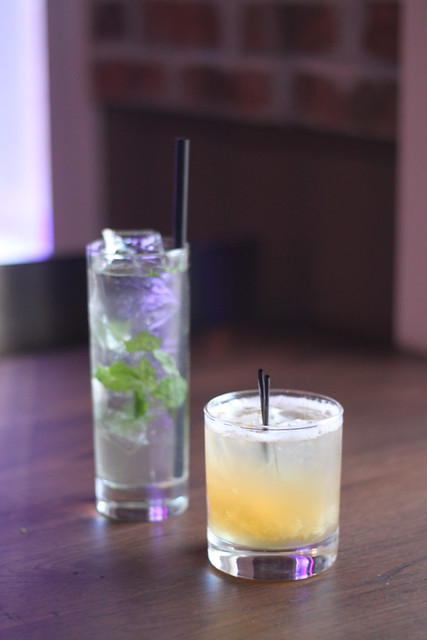 We also ordered the Lavender Blossom, made with lavender-infused rum, lemon honey simple syrup, mint, and club soda. It tasted like a lavender mojito, but was a tad too sweet for my taste. We appreciated that the simple syrups were made in house and had different variations for each cocktail.

Next, the kitchen fired us up some red curry chicken meatballs. Seasoned with lemongrass, ginger, and red curry cream, they packed quite a bit of flavor and were appropriately moist. This was the heaviest of apps and we had a tough time finishing them after the other dishes. 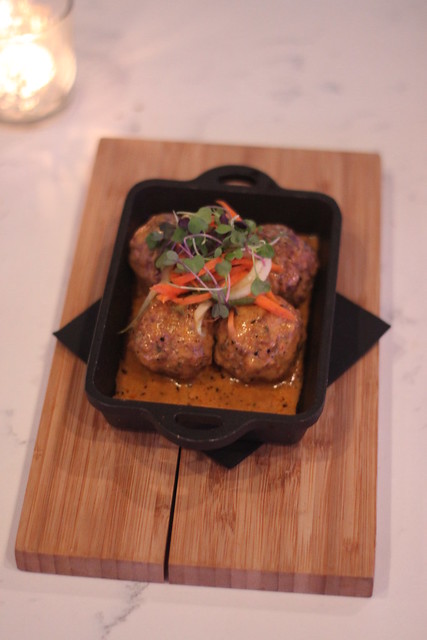 For entrees, we went with the classics. The 10 Tavern burger was made with an Angus chuck and short rib patty, double provolone, fried egg, lettuce, tomato, red onion, garlic pickles, and mayo on a brioche bun. It was a stacked, juicy burger and it really hit the spot.

10 Tavern is owned by the same parent company as Phillips Seafood restaurants. The brand sources its seafood from A.E. Phillips on Hoopers Island, Maryland. Knowing it was local, we had to try the Maryland crab cake sandwich. It was an enormous all lump crab meat patty, with lettuce, tomato, tartar sauce, wilted slaw, on pretzel bun. I really enjoyed the slaw in particular for its tangy taste using non-traditional slaw ingredients like Brussels sprouts. 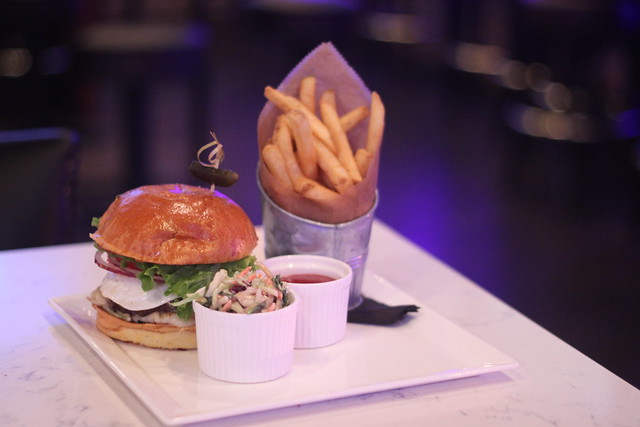 As if we weren’t full enough, the cinnamon bread pudding rounded out our meal.  This dessert is to die for. These bite-sized bread pudding pieces made with cinnamon chips and drizzled with white chocolate glaze were doughy and delicious. They are presented in a fake Chinese carryout box, a cute nod to the restaurant’s Chinatown location.

Whether you’re looking for a good drink before a game or concert, or in need of nightcap, 10 Tavern is a solid option. Chef Rashad Edwards fires up an inventive bar menu that we’ll definitely frequent for happy hour.