This year’s new restaurants have demanded our attention. From swanky hotel concepts like Brothers and Sisters and American Son, to specialty extensions of our favorite spots like Rose Previte’s Maydan or Dani Moreira’s Call Your Mother, we’ve had our hands—and our mouths—full. 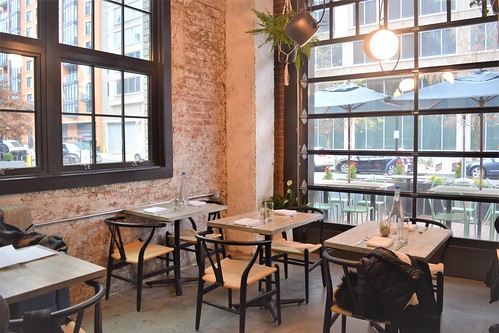 The new-ish Prather’s On The Alley borders a few of our go-to brunch locations like A Baked Joint and Busboys and Poets. The recent development of this area has caused an influx of foot traffic, so we gladly welcome another eatery to divide up the long lines and diversify the options.

The exterior is discreet, but welcoming with a large patio out front. The interior has the atmosphere of a New York City loft complimented by hanging plants and exposed brick. The space feels upscale without being actually fancy, which is nice for a special occasion or brunch with family members. 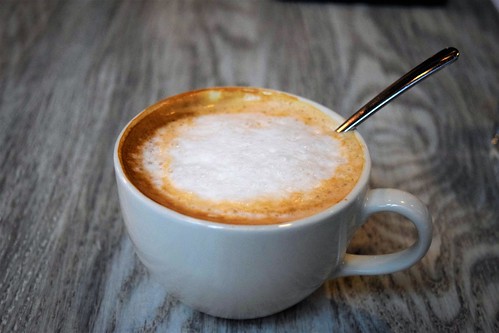 The space is bright due to tall windows, so finding a photo-friendly seat wasn’t an issue. Nothing  could distract our gaze at the large French press at the table next to us, so coffees and cappuccinos were ordered before anything else. The cocktail menu was unique and separated into sections titled Booze and Juice, Market Bloodys, and Bubbles. We ordered the Bittersweet, the Maria, and the Bellini.

The Bittersweet was a well-executed cocktail with gin, honey, Aperol, grapefruit, and cinnamon. The herbaceousness of the gin was balanced, but not suffocated, by the juices and sweet liquors added. The Bloody Maria was spicy, and adorned with salt and chili rim. It wasn’t overly watery or tequila-forward, making it was easy to drink. 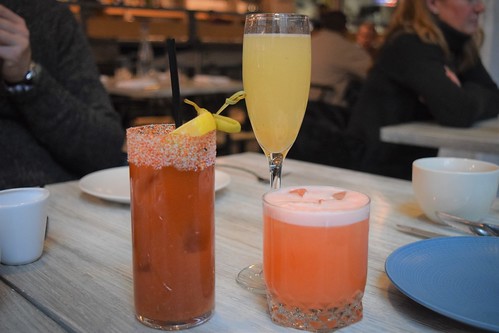 The Bellini was an interesting winter version of our beloved mimosa. Instead of orange juice, a pear puree was added. While delightful, the puree sunk to the bottom and didn’t saturate the entirety of the beverage; the dry Champagne overpowered the drink. This drink could be a winner if ratios and consistencies were modified, though.

At first glance, the food menu seemed like a paradox of standard brunch items and items off the beaten path, like a salmon dish with blinis, a mini Russian-style pancake.

Intrigued, we bit the bullet by ordering a good variety of dishes, including the said smoked salmon with blinis, the steak and eggs, the Caesar salad, and as you should know by now, the French toast. 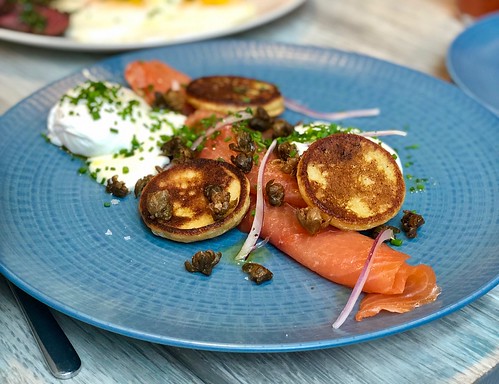 Although we were skeptical about this dish, the smoked salmon hit the nail on the head. The fish was salty, but not pungently fishy, and dissolved in our mouths like warm butter. The salmon was served with poached eggs, crème fraîche, and the blinis. All the pieces of this dish worked harmoniously to make a bite that hit all the tastes and textures you want out of savory brunch entree. Atop this unique salmon dish were fried capers, which was a nice touch of tanginess and crunchiness to the alternatively supple, pickled ones. 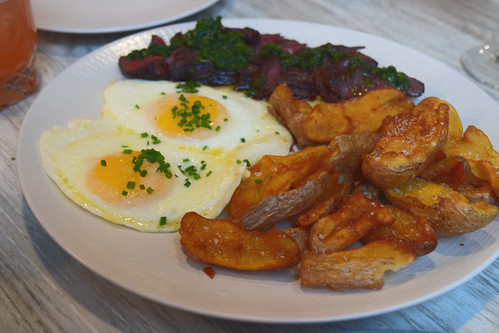 Though a staple, I find that steak and eggs is actually a risky dish to put on a brunch menu, since the bar is high and there is ample room for error. This was a solid rendition. The steak was cooked perfectly and the salsa verde was a palatable mesh of mixed herbs and oil. The steak itself wasn’t the most flavorful piece of meat, but it was a solid brunch steak. The smashed, flash-fried potatoes were an incredible crunchy starch compared to classic French frites. Thick, misshapen, and perfectly conducive for dipping in the accompanied egg or hot sauce, this fry was a special one. 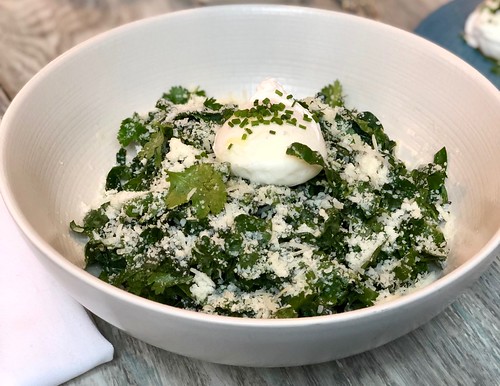 I honestly couldn’t tell you what convinced me to order a salad for brunch other than the fact that it was at the top of the menu and I was slightly hungover— what, you don’t crave fresh lettuce? They advise that this Caesar be topped by grilled chicken, but I went a full 180 and ordered a poached egg on top—which the restaurant may want to permanently add to the menu. This was one of the better Caesar salads I have enjoyed. The big bowl was kale based, but heavily chopped to be more soft and chewable. It had tons of fresh herbs within the leaves, making it really fragrant, fresh, and strong enough to hold up the layer of parmesan cheese. The poached egg added an additional layer of dressing from the punctured yolk. Who knew a salad could create such a droolworthy experience?

All the main dishes were delightful, but my whole table agreed some of the mains were a bit on the colder side. I like my food piping hot. After all, no legitimate French fry indulgence is complete unless you burn the roof of your mouth. 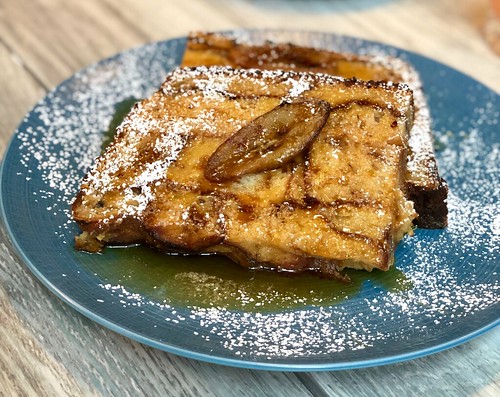 Sometimes I say “I’m not going to order dessert.” On those occasions, I’m a complete liar and order French toast,  exclaim it’s a brunch staple and not actually dessert at all. Whether or not you listen to the angel or devil sitting on your shoulder, the Prather’s French toast must be on your table.

This French toast comes with two giant brioche baked French toast slices. There are dramatic swirls of cinnamon throughout the toast as well as warm, swollen, golden raisins. It’s smothered in syrup and topped with bananas. The gooey inside didn’t compromise a crusty exterior, and after just one bite, we couldn’t help but become slightly emotional. This is the best French toast I have had in Washington, D.C. this year. My only complaint with the French toast is that there was a bit too much syrup and I would have liked more banana slices to be part of the dish rather than an a single ornament.

The Bitches say: Four Champagne flutes for Prather’s. The space is charming and trendy, food is scrumptious and appropriate, and cocktails are worth the post-night-out splurge—your liver will understand.

Prather’s On The Alley serves brunch Saturday and Sunday starting at 10 a.m.

Prather's On The Alley