I’m a snob, so I was immediately turned off upon entering Plan B Burger Bar. Located alongside the Navy Memorial and National Archives metro, the casual burger chain was swarming with tourists on this Sunday in the height of cherry blossom season. I was already low on patience with tourists after several hours in traffic the day prior. So, I was particularly peeved by the large groups of obnoxious middle schoolers and elderly people dropping their smart cards out of their fanny packs on this slightly chilly Sunday morning. We had taken in a SoulCycle class in Mt. Vernon and then bopped down to Penn Quarter for a “burgers, bourbon, beer brunch,” as it was described in the press release.

Atop my loathe of the tourists that swarmed the restaurant, the space’s decor was the exact style I loathe most: overtly modern with lots of red and that terrible lighting that casts yellow undertones on everything. On the other hand, my brunch date, Lauren, likes modern decor, and commented that she thought it was fun. Different strokes.

The burger chain, which recently opened the Penn Quarter location, has faux red leather booths around the edges, faux leather chairs at white oak tables, and funky red bulbs and metallic fixtures hanging from the ceiling. We entered through the side door, where there’s a back-lit bar focused on bourbon and—you guessed it—more faux leather in the stools. 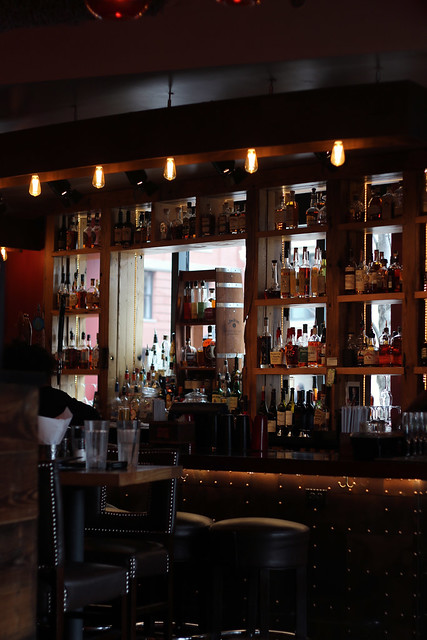 We made our way to the hostess stand, where the staff was friendly and welcoming. They cleaned off an enormous booth by the front window and in we settled. We’d just enjoyed a great SoulCycle class at Mt. Vernon with Wayne. (Also, hi, Wayne, you’re a babe.) So, we were ready to eat.

I ordered my usual round of water, black coffee, and a mimosa. Lauren ordered black coffee and water. She maybe should have ordered a mimosa as I was tipsy in about two minutes, thanks to SoulCycle.

As we unrolled the paper napkins to place them on our laps, we noticed both sets of silverware were dirty. Foul. They did swap them out quickly, but this was the first time I’ve experienced dirty silverware at a restaurant in quite a long time. 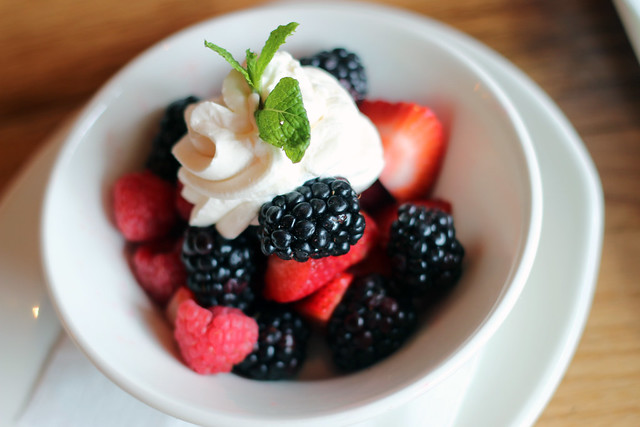 We planned our order and opted to share everything, as we usually do. First, a sweet start with the fresh berries with whipped cream and the bourbon pecan sticky buns. The bowl of berries—blackberry, strawberry, and raspberry—were fresh and topped with a sweet, thick whipped cream and a sprig of mint. Served warm, the bourbon pecan buns were dense and covered in a thick, sticky caramel. They were topped with sliced fresh strawberries and powdered sugar and more pecans. 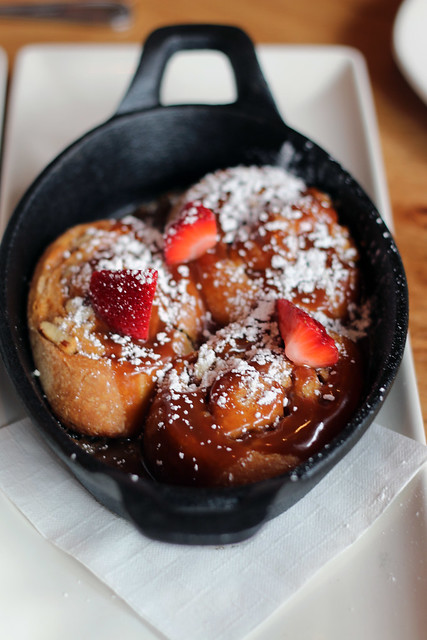 It goes without saying we ordered the brunch burger, which came with a fried egg, cheese, and bacon on a croissant, to share. It was enormous and served with truffle fries.

According to the menu, the meat at Plan B Burger Bar is free of hormones and antibiotics, and served fresh, ground in-house, never frozen. You can choose from “pink” or “not pink” at this burger joint—so there are no juicy, bloody, rare burgers in your future, you carnivores. Of course, we ordered ours pink. 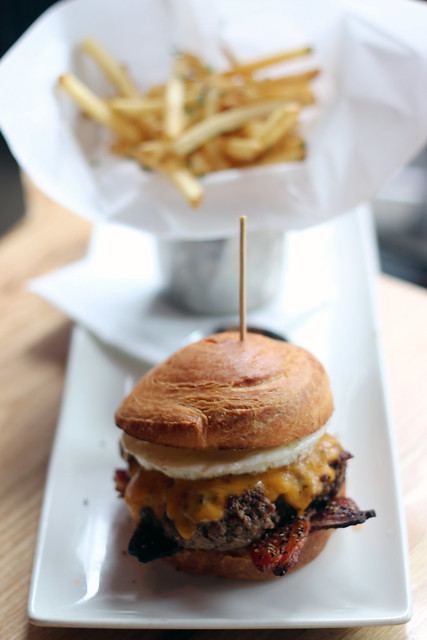 When it arrived, the bun looked nothing like a croissant and frankly didn’t look that yummy. I’m pleased to report that it tasted far better than it looked—moist and buttery. The enormous burger was an inch-and-a-half thick atop thick slices of pepper-cured bacon, and topped with a cheesy, fried egg. It was all things good: moist burger, bacon, egg, cheese, bread. It was definitely not the best burger I’ve had—but it was good. You’d expect the burgers to be good at a burger bar. 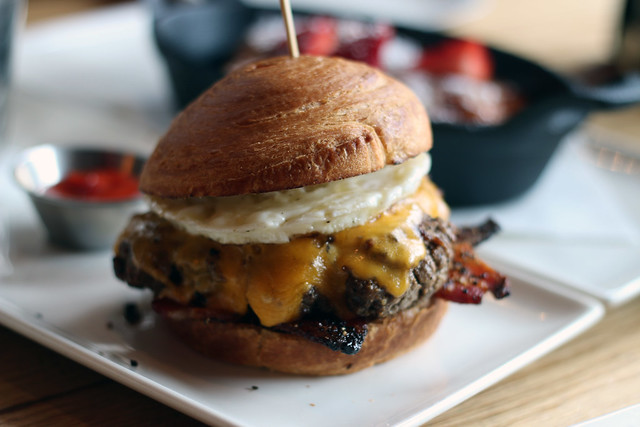 The omelet, which you may expect to not be that good at a burger bar, was not that good at this burger bar. The crab cake omelet was literally a crab cake atop an omelet, which was filled with melted Monterrey Jack cheese and avocado. The crab cake lacked any flavor at all—it didn’t taste like crab, seasoning, or much of anything. The omelet was a big eggy monstrosity you would expect at a standard restaurant. I was looking forward to some avocado, which was inside the omelet and brown, making me squeamish. 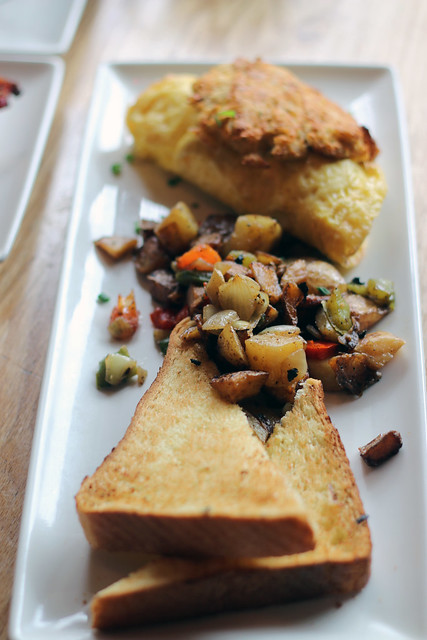 It was a lot of food (four dishes, coffees, and a mimosa) for $55, which is a good deal for brunch in D.C. That said, this brunch was on the house as Plan B invited us in.

The Bitches say: C+. Decent burgers and American fare at a burger chain. It would be a good, budget-friendly spot to take visiting guests before or after braving the swarms of tourists on the National Mall.