Portland really does have a thing with biscuits. I noted it during my last trip to Rose City when brunching at Screen Door and next on my PDX comfort food tour was Pine State Biscuits, an acclaimed, casual restaurant with a few locations throughout the city. (PS, Check out our entire city guide to Portland here.) 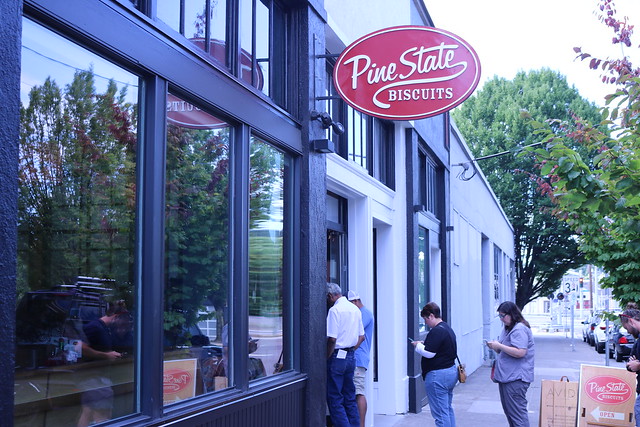 When recently in town for the 4th of July long weekend, I was joined by my boyfriend Robert and his sister Jess at the SE Division location. I knew the eatery was popular, but I was surprised to see a long line out the door at 11 a.m. on a weekday. To its credit, the line moved quickly. 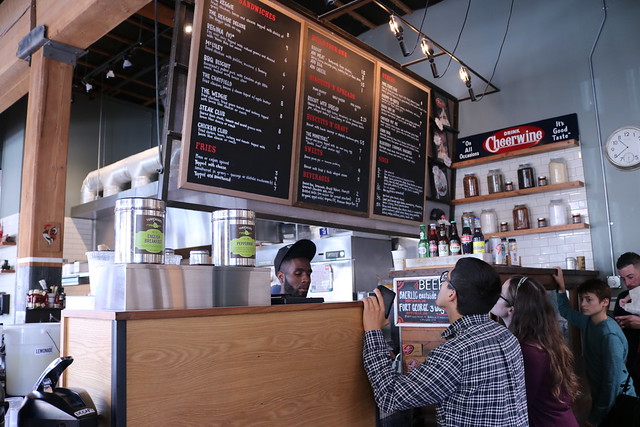 At Pine State Biscuits, or this location at least, you order at the counter and your food is brought out shortly. During the our wait, which ultimately was about twenty minutes or so, we had plenty of time to study the menu. 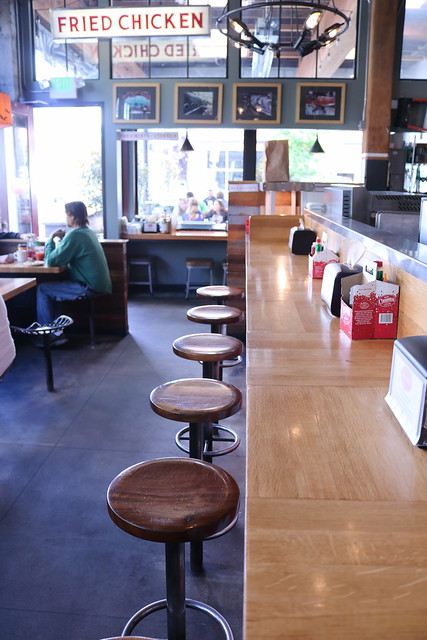 The offerings are obviously biscuit-centric, ranging from biscuit sandwiches, biscuits & gravy, and the option to build your own biscuit. There’s also the choice of standard brunch fare like pancakes and shrimp-n-grits, and some more interesting items like corn dogs, but who wouldn’t go straight for the biscuits at a biscuit joint? 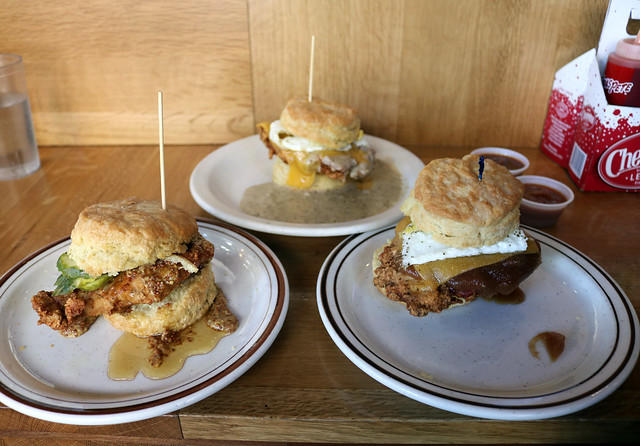 Robert went full-hog and ordered the Reggie Deluxe, one of Pine State Biscuits’ signature dishes. The impressively expansive biscuit is filled with a large slab of fried chicken, bacon, and cheese, topped with gravy. The “deluxe” factor is the inclusion of a fried egg. 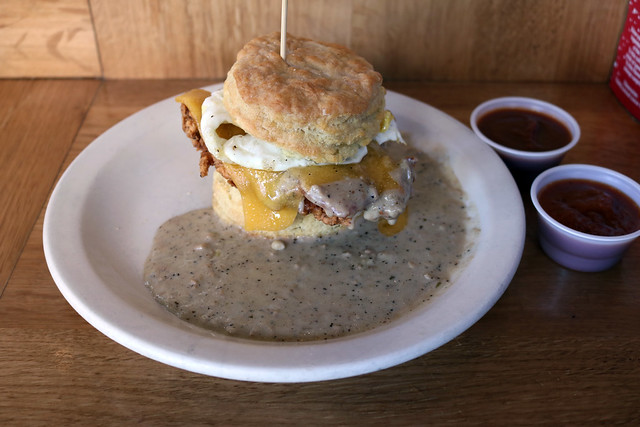 This felt like a heart attack waiting to happen, in the best way. The flavorful gravy really tied the dish together, although I could only muster a few bites since it was so rich. The fried chicken was also a star; it was tender, juicy, and wasn’t overpowered by too much breading, a common fault among fried chicken dishes. 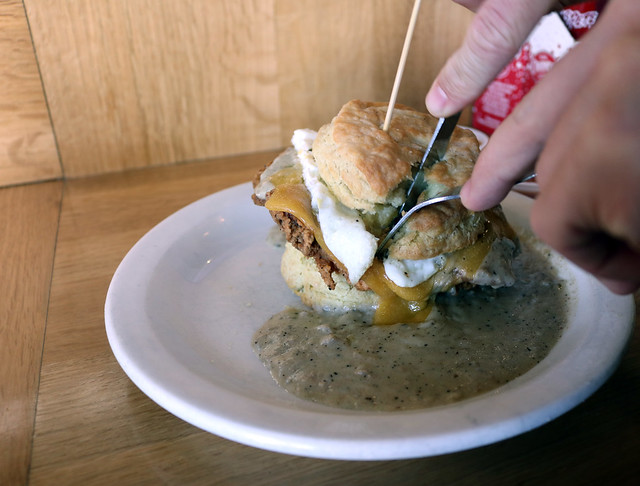 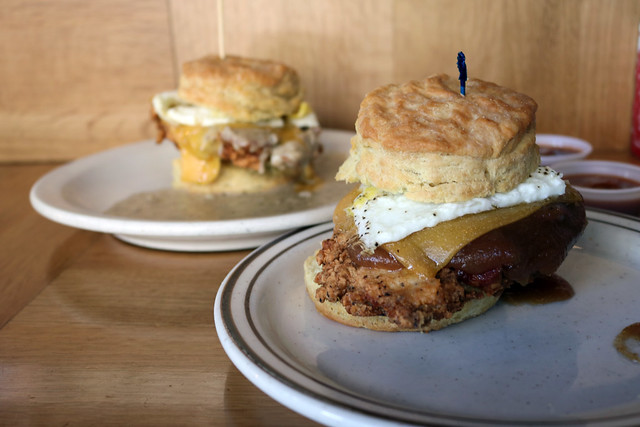 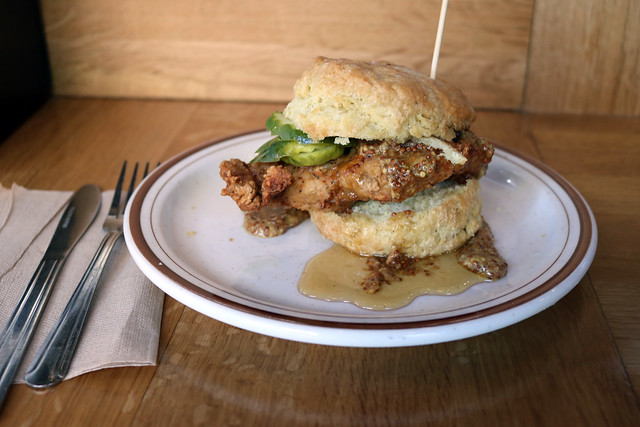 I was torn between the Regina, a vegetarian option with eggs, braised greens, and hot sauce, and the McIsley, with fried chicken, pickles, mustard, and honey, but was ultimately swayed to the McIsley. The cashier gushed about the housemade pickles and I was drawn to the combination of honey and chicken.

Similar to the other sammys, the chicken was delectable and I particularly loved all of the toppings. The pickles added a great crunch and a tangly element to each bite. 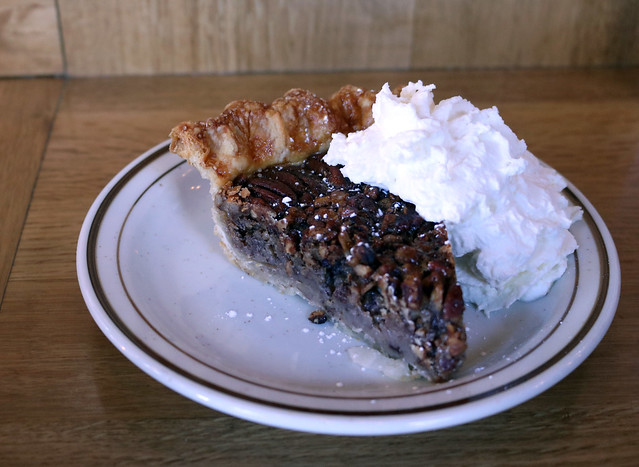 Just because we hadn’t consumed enough carbs, Robert insisted on a slice of the pecan pie. Pine State Biscuits sure does bread right; I couldn’t get enough of the flaky crust. The pie was well-constructed and perfectly gooey, ending our meal on a sweet high note. 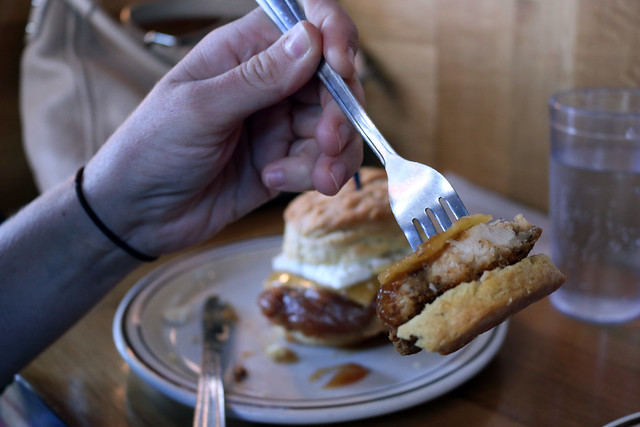 The Bitches say: A. Don’t be deterred by a line. Pine State Biscuits is worth the hype, we loved every biscuit sandwich we sampled.

One thought on “Pine State Biscuits Brunch in Portland, OR”