Logan Square’s newest addition is un-beer-levably trendy. Pilot Project Brewery Incubator and Tasting Room is a coffee shop/bakery/beer incubator/co-working space (though the beer is always flowing, it becomes more of a “bar scene” after 4 p.m. when they stop serving coffee). 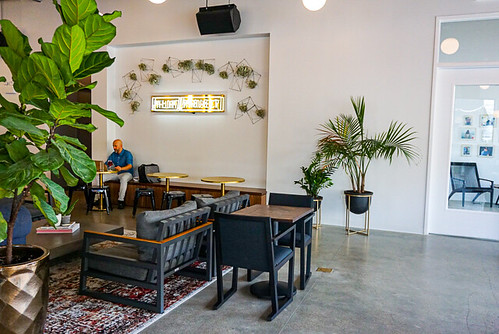 The aesthetic is trendy and minimal. There is a lot of concrete and glass, made cozier with wood accents, rugs, large leather couches, and plants. It has the vibe of a WeWork, without the expensive subscription. Honestly, the only thing more impressive than the beer selection is their Fiddle Leaf Figs. 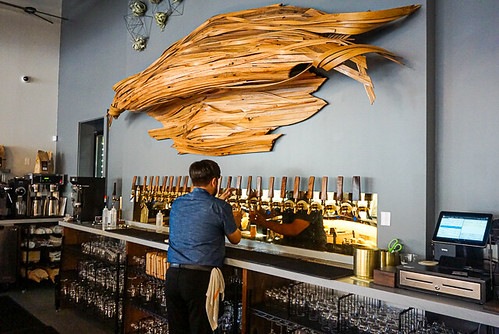 Pilot Project, a conglomeration of multiple breweries, opened to great acclaim last month. In fact, they almost completely sold out of beer in the first three weeks. They invited us in for a complimentary visit. My trusty beer loving companion and partner, Cam, came with me. Pilot Project has a small selection of charcuterie boards, waffles, and bakery items. On weekends, there are food trucks on the dog-friendly patio. 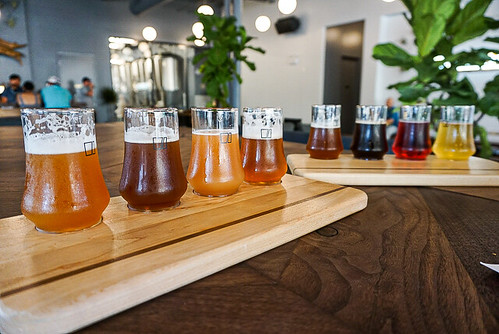 Dan Abel, co-founder and CEO of Pilot Project, set us up with a flight each to start. Abel and his partner, Jordan Radke, opened Pilot Project to work with small-scale brewers and provide them a place to use large tanks and bring things up to scale. Flights at Pilot Project cost $14 for four samples. Dan walked us through the global-themed selection, featuring the house IPA; a hazy double IPA; the popular Manana de Mallorca, a Spanish tea IPA; and Little Idiom, a sour. On the second flight, we had The Original, a dark Mexican lager; the Après Cafe, a coffee ale; a red cider and Spanish cider.

I definitely recommend sampling the menu through a flight. Pilot Project is doing some interesting, innovative small batches of beer. My favorite was the Spanish tea IPA, which is fruit-heavy and made from a sangria tea (yum). 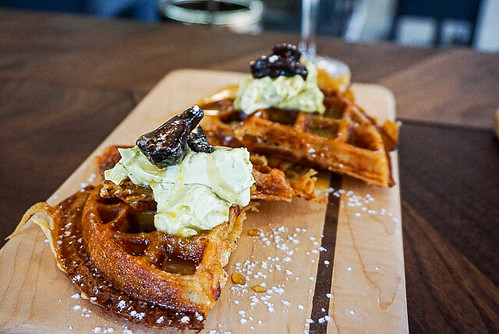 For food, we decided to split the matcha fig waffle with matcha whipped cream, caramelized figs, maple syrup, and a lemon honey drizzle. I was a big fan of the matcha whipped cream, which was especially… well… creamy! This was on the small side, and a better serving size for one person, but we wanted to try other things, so it was a good appetizer. 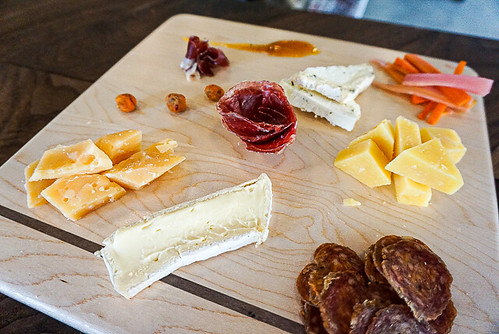 Next, Dan had us try the charcuterie and cheese boards. I will never say no to a cheese plate. While it’s not considered a traditional brunch dish, it really should be. The board was an artful arrangement of local meats and cheeses. It came along with some fresh bread for serving. Sometimes at breweries, the menu is an afterthought. We were pleased to see that Pilot Project is bringing the same enthusiasm and care to the food menu that they do to the beers. 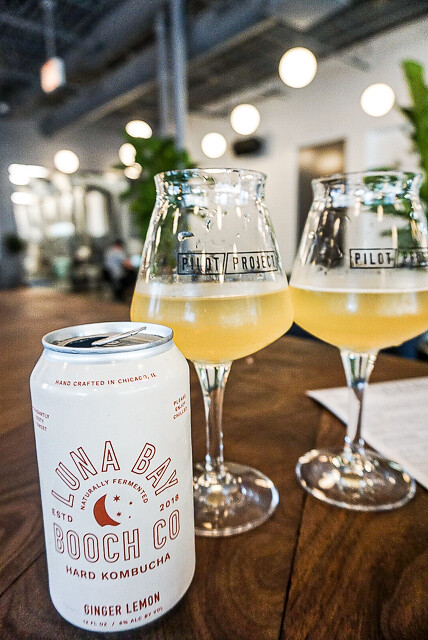 We ended with a glass of Luna Bay’s hard kombucha, made to have a higher ABV than regular kombucha, which boasts 0.5 percent. This is done by adding Champagne yeast to the popular “health” drink, making it less healthy but more fun. Luna Bay’s hard kombuchas are another incredibly popular menu item, and Cam and I shared one of the last cans of the ginger lemon flavor. It was light and fresh, and reminiscent of Champagne. I am a big fan and formally vote for hard kombucha to be the summer drink of 2020. Sorry, spiked seltzer.

Pilot Project is the perfect spot for a casual brunch, working lunch, group project, or date. With a great selection of beers, bites, and reliable Wi-Fi, we want to move in. Please forward our mail!