It’s no surprise that I have quite an affinity for Spain. I could easily survive off sangria and patatas bravas. I recently traveled to Mallorca for a post-wedding vacation with my family. The island is breathtaking, serene, and utterly picturesque: especially as the clouds meet the Mediterranean. A visit to Pamplona, a Spanish restaurant in Arlington, only seemed appropriate upon my return—I thought it might help dull the pain.

My darling roommate, Kara, and I decided to try MADabolic, a high intensity workout class, before hitting up brunch since they’re both conveniently located next to each other. If you’ve never tried MADabolic before: we’re warning you it’s a very challenging workout—we just barely survived. That said, you certainly won’t feel guilty for indulging at brunch afterwards. 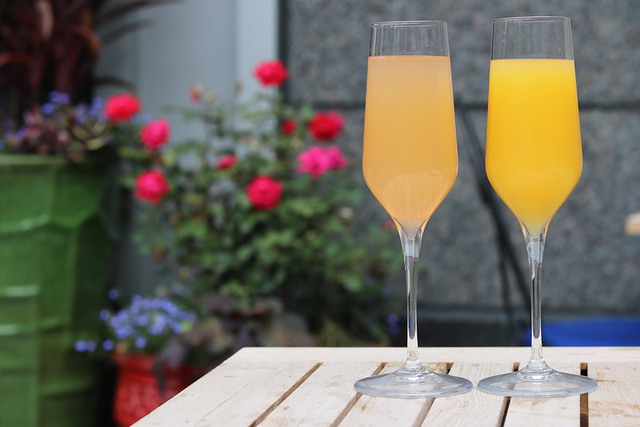 After that workout, we ordered mimosas immediately upon being seated on the outdoor patio at Pamplona. Kara wanted to keep it simple and went with a classic mimosa with orange juice. Meanwhile, I was feeling emboldened after our workout and ordered a grapefruit apple mimosa. The grapefruit apple mimosa was sweet and strong, with just a hint of mint that I really enjoyed. Pamplona has a fairly extensive menu with an inexpensive bottomless brunch deal for $35, which includes both tapas and mimosas.

As luck would have it, it became overcast and raindrops began to fall as soon as we placed our orders. The hostess had let us know they were expected to be fully booked for tables but we could move to the bar area.

What’s a Bitch to do at a rainy patio brunch? Flee inside before your hair gets ruined, that’s what. The inside is exquisite and sexy, equipped with electric blue velvet booths, edgy prints, artwork and bulls of course as it’s inspired bythe running of the bulls in Pamplona.

The chef sent out a plate of smoked salmon with housemade ricotta. This was clearly for Kara as I’m a vegetarian. She especially liked the pickled asparagus with the thinly sliced salmon—noting that they blended together nicely with the creamy texture of the ricotta. 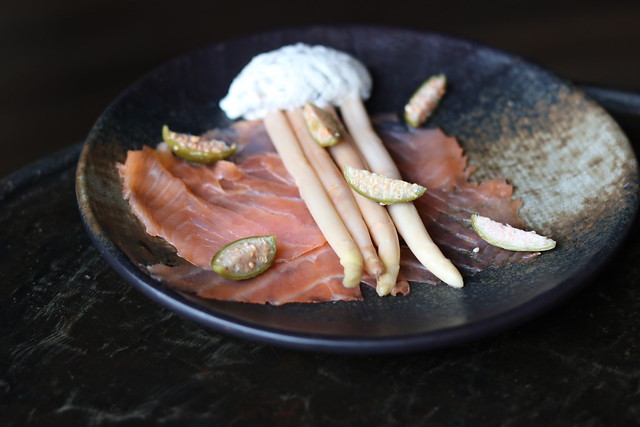 The chickpea frites were calling my name. The golden stacks were adorned with blistered shishito peppers, smoked sea salt, and topped with a savory Romesco sauce. The combination of the flavors was delightful and I was excited to see what else was in store. 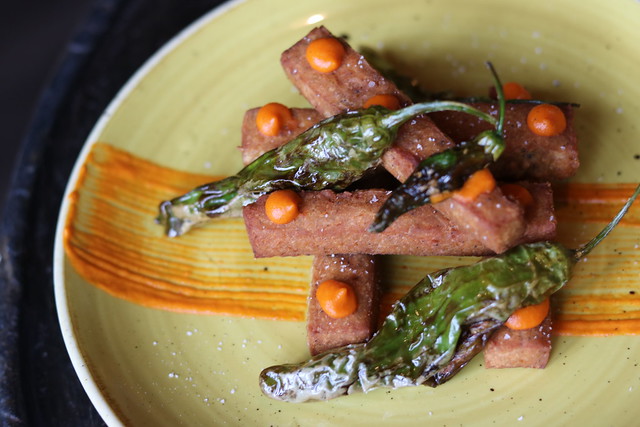 Kara had warned me she would need to have the Spanish grilled cheese. The steaming sandwich was stacked with Serrano ham and Mahon cheese. The grilled cheese was drizzled with honey which paired the sweet and salty flavors together well. She had to stop herself from finishing all of it. 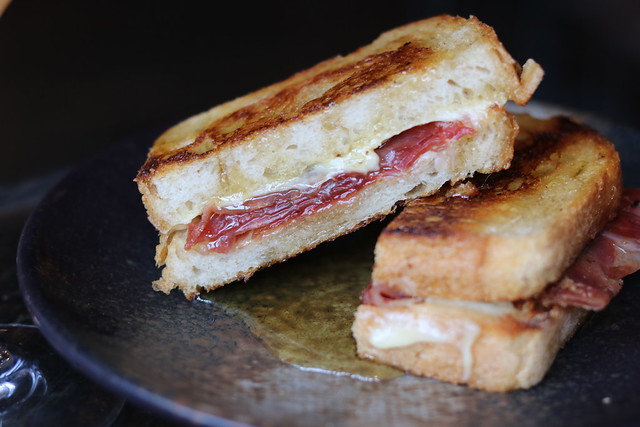 At this point, it was downpouring outside. Our handsome server, Matt, replenished our mimosas constantly throughout our leisure brunch. I finally taste tested the patatas bravas. The steaming potatoes sat on a bed of smoked tomato sauce with pepper aioli. While these weren’t the best I’ve ever had, the patatas were tasty, and thankfully not dry or bland.

The Migas came out next. Chorizo, bread cubes, and Rapini were topped with sunny side egg. This wasn’t among Kara’s favorite items during our meal but she did find it to be a decent option if you’re into chorizo. She especially liked the incorporation of bread cubes into the dish. 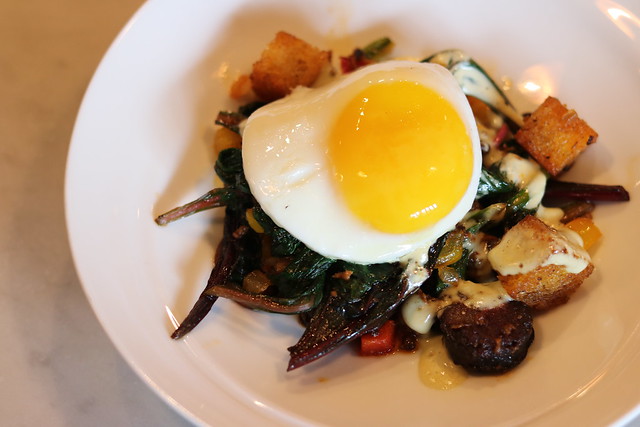 Kara had to make some space for a picture perfect Serrano Benedict. Sliced ham wraps around a beautifully poached egg with olive oil Hollandaise on a bread base. The egg yolk was gooey and delicious as it mixed with the spinach. This was a must-try for Kara as it’s certainly not your ordinary Benedict. 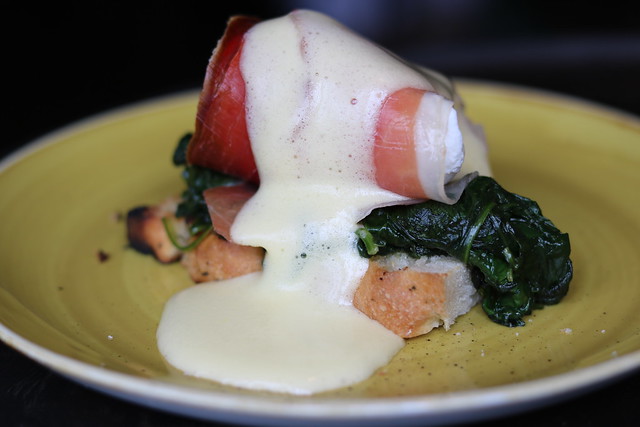 Despite being stuffed, I tried the spinach, mushroom, and Manchego scramble. Manchego is by far one of my favorite cheeses so I especially appreciated that. While the scramble is prepared well and generous in portion size, it needed a little kick. It was just a bit too bland for my taste buds. 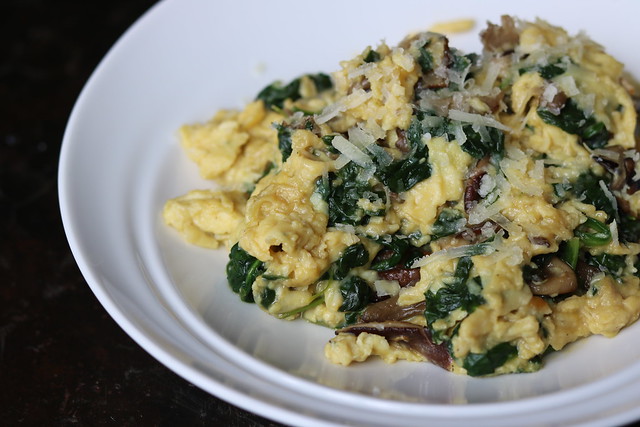 For a sweet surprise to end our meal, Matt brought out two trays lined with an assortment of sangria flavors and blends for a tasting. Considering it was still raining outside, Kara and I decided we were more than game to continue day-drinking at Pamplona. At this point, the music was louder and it was completely filled. The sampler contained a variety beginning with a sangria rosé along with blanca, roja, sparkling white, sparkling rosé, and a cider sangria. The sparking rosé and roja were my top choices. 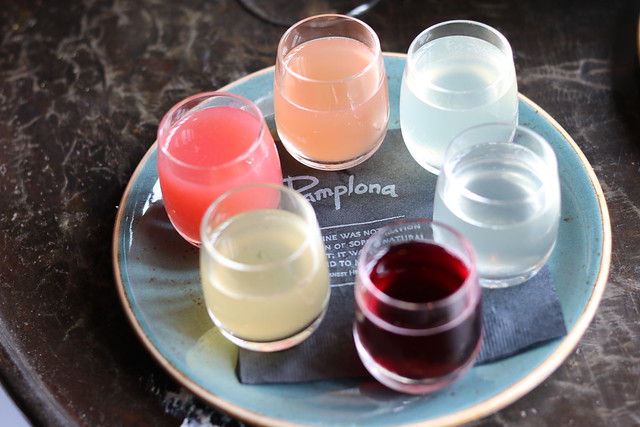 We couldn’t leave without dessert. The churros was warm and fluffy, appropriate for a rainy afternoon. The cinnamon-spiced churros were just the perfect size for sharing and served with a delicious chocolate sauce for dipping. 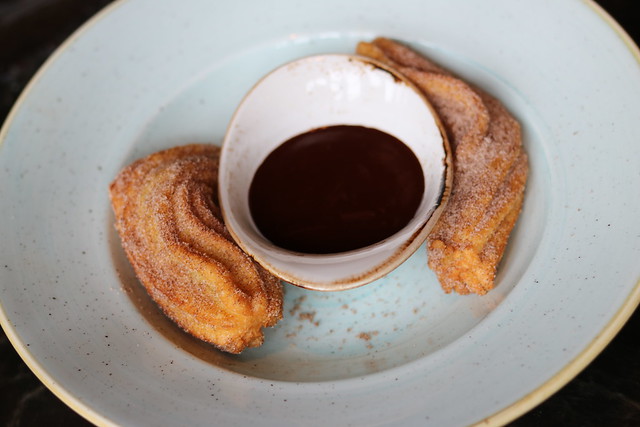 The Bitches say: A. For an innovative and affordable bottomless brunch that encompasses both modern and authentic Spanish flavors, channeling sexy vibes coupled with killer libations.