I have a tendency of scheduling nearly every detail of my life. You can blame it on my Type-A personality, but this is how I function. My scheduling even consists of tentative time slots for informal plans. For instance, I had blocked off quality couch time on a recent Saturday morning prior to visiting a winery. So much for that, as my roommate Haley was about to embark on a strict new diet and asked us to have one last gluttonous meal with her beforehand. My other roommate, Kara, and I were in dire straits after seeing Tritonal the previous night, so we agreed to this much-needed brunch on the fly. 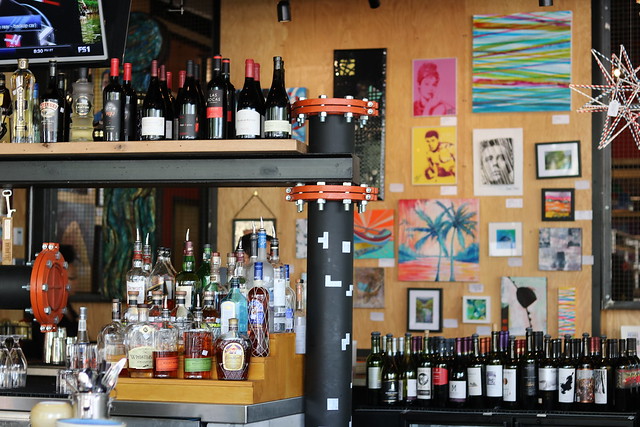 Being an resident of Virginia for over five years, there are certain neighborhoods that I don’t frequent. Shirlington is sadly one of the neighborhoods I often avoid, despite its charm. But, in the spirit of brunch and exploration, off we went to Palette 22. We arrived at the restaurant, sans reservation, and were pleasantly surprised to be seated right away.

It’s impossible to miss the live painters on premise and artwork covering every inch of the restaurant, ranging from photographs and paintings to murals and drawings. Palette 22 is not just a globally inspired restaurant, but also an art gallery situated in the heart of Shirlington. The restaurant showcases pieces available for purchase from a changing variety of local artists. 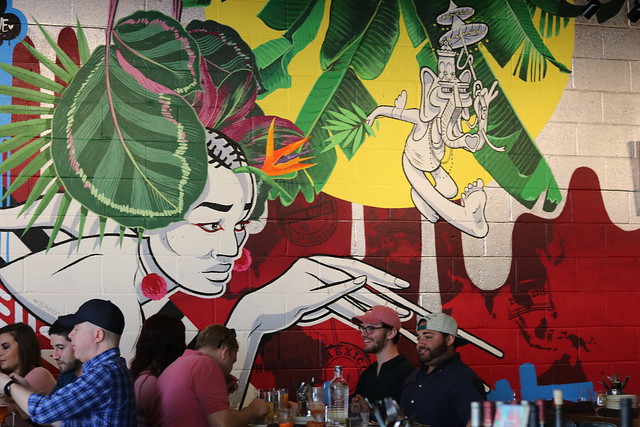 We were enamored by the graffiti-style amazon love letter mural painted by Miss Chelove. I’ve seen her work throughout the city and recognized her signature immediately.

For beverages, we decided to go with the $25 bottomless option for tapas. The restaurant’s brunch cocktails are difficult to resist at just $2.22 each, since bottomless beverages are banned in Virginia.

If Bellinis are an option, I will always order one. The passion fruit Bellini looked beautiful, but was much tangier than I had expected. Kara was in no condition to handle anything stronger than apple cider, which absolutely satiated her need. After one Bellini, I decided to switch to the blood orange mimosa, which was a smart and refreshing choice.

Haley scouted out the Bloody Mary bar, which was slightly underwhelming. The house mix contained enough horseradish to make the drink unpalatable and the garnishes did not appear very fresh. However, the 20-plus hot sauces and various salt combinations added a nice touch. Haley switched to the hibiscus mimosa and did not regret that decision as it was light, floral, and just sweet enough.

Kara and Haley immediately fought over the shrimp and grits. They noted the flavors came together wonderfully and had to order more. This was Kara’s favorite dish of the meal. The grits were hearty and creamy, while the shrimp was incredibly fresh. 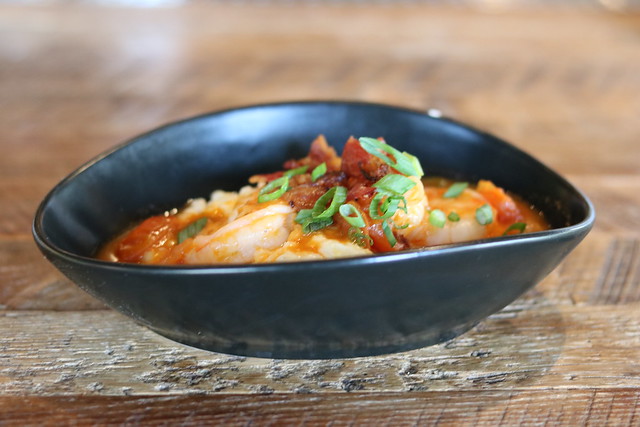 I started with the patatas bravas, which as a vegetarian, are always a must for me when spotted on a menu. The Harissa-spiced fried potatoes were served steaming hot and well seasoned. We wished that there was a tad more of the garlic aioli for the potatoes.

The garden frittata was presented beautifully and served in an adorable cast iron skillet. The seasonal vegetables were an excellent touch with the Parmesan-egg custard. While the frittata was cooked well, it lacked flavor. 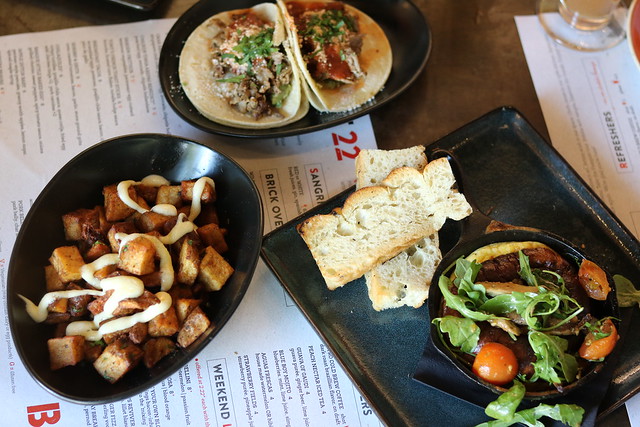 A true dessert girl, Haley didn’t shy away from the sweeter items. The corn flake encrusted French toast sticks were one of the best brunch items she’s had in quite some time. The brioche sticks were crunchy, but perfectly textured inside and not at all chewy. The Nutella fudge sauce added to the dish’s appeal. 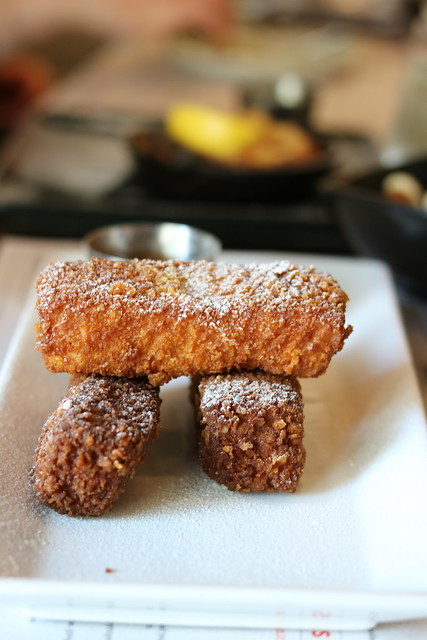 While we appreciated that our items came out staggered, we weren’t able to keep up with the pace. Between the three of us, we tried a number of small plates from various cuisines and made use of the extra plates and basket of silverware on our table between courses. 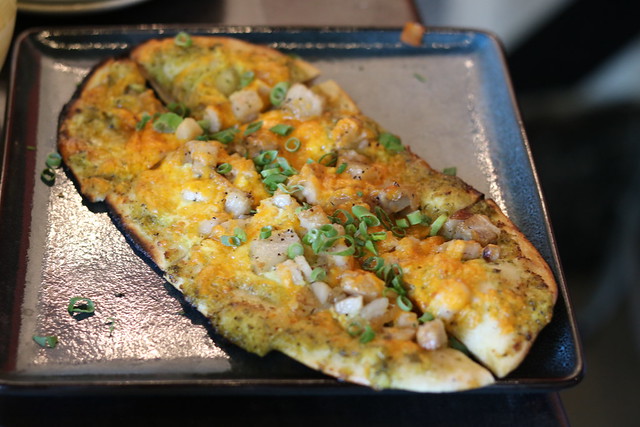 I refer to Kara as your classic bae, a.k.a. the bacon-and-eggs girl from Buffalo. With that said, the bacon and eggs flatbread was a natural choice for her as she was in need of carbs. The flatbread was a bit deceiving at first since she couldn’t detect any bacon. At a glance it was hard to see the meat, but as soon as she took a bite, the bacon flavor was apparent. It was an innovative twist on a classic breakfast item. The caramelized onion and smoked cheddar was a nice accompaniment on the flatbread. 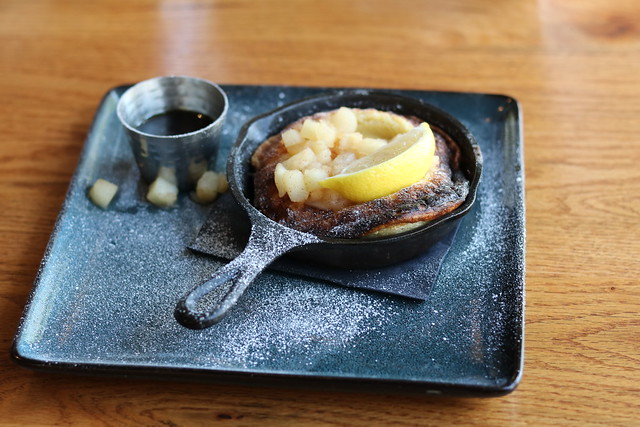 I was ready for something sweet on my palette and tried the apple dutch baby. As you can imagine, the German style pancake is best devoured while served warm. I made the mistake of waiting too long to try it and struggled with cutting into it. Despite trying it cold, the lemon, sugar, and spiced maple syrup on the baked Granny Smith apples was delicious.

As far as Haley was concerned, the tacos vampiros stole the show. The two tacos, though seemingly tiny, were filling and packed a punch. The ribeye was seasoned well and tender; it paired with the poblano and chipotle salsa deliciously. Haley had some difficulty sharing. 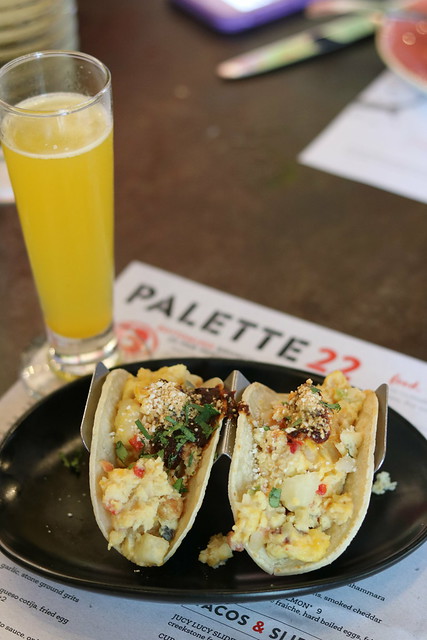 As if Kara wasn’t stuffed already, she wanted to try the breakfast tacos which consisted of scrambled eggs, potatoes, bacon, and pico de gallo and drizzled with a guajillo chile sauce. While not a fan of the corn tortilla, she was pleased with how authentic the tacos tasted and felt like as if she had traveled to Mexico for breakfast.

While I couldn’t manage to eat any more, I had to explore the fried eggplant flatbread. As a vegetarian, I can’t resist beautifully cooked vegetables.  The flatbread was slightly overwhelming to eat as eggplant, roasted garlic, mozzarella, tomato, and olives slid off. Aside from the messy experience, the flatbread didn’t miss a beat. 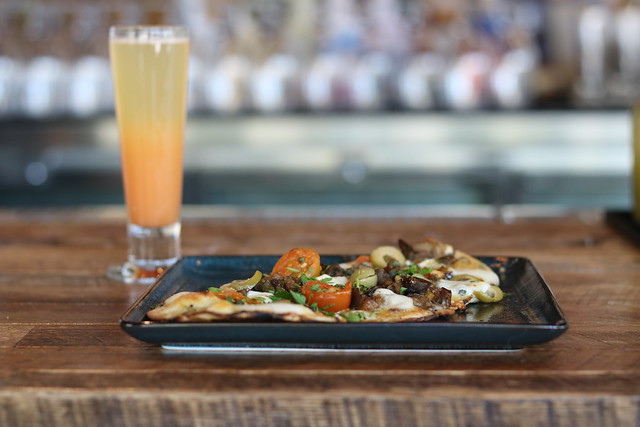 The beignets were an exceptional finish to a quirky brunch. Bite-sized and fried to perfection, this French tradition was well executed by Palette 22. We especially enjoyed the mango curd lying beneath the beignets. The tartness of the mango offset the sweetness of the dough and powdered sugar incredibly well. 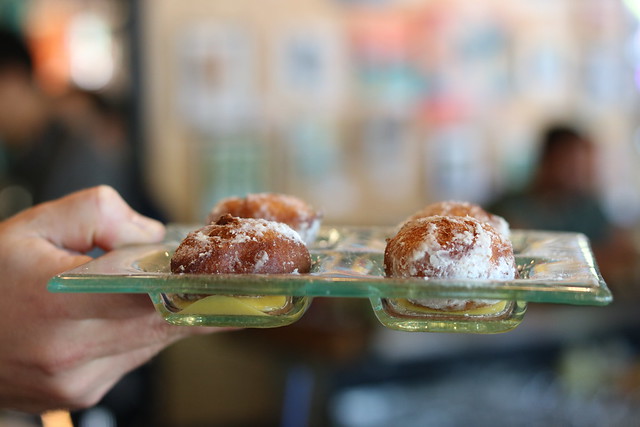 The Bitches say: B+. For an unexpected and truly creative dining experience in Shirlington. While the Bloody Mary bar needs work, the food is promising. Enjoy artful dining through a culinary trip around the world combined with live artists and stunning murals.