It’s only once or twice a year I get to Tampa, where I grew up. It’s an interesting place to return to, coming from hectic and exhausting city life in Washington and now New York.

Tampa is not so much a city as it is a mass suburbia, impossible to traverse without an enormous vehicle and plenty of gas. Indeed, my dad’s house is nearly 45 minutes up an expressway to anything that’s not an Olive Garden or Outback Steakhouse.

So when I landed in T-Town for the holidays and the family announced that we were having brunch at Oxford Exchange in South Tampa, I was delighted. It’s a trek from home, but I was so enamored after reading about Cori Sue’s visit a few years back that I had been wishing to visit for quite some time. 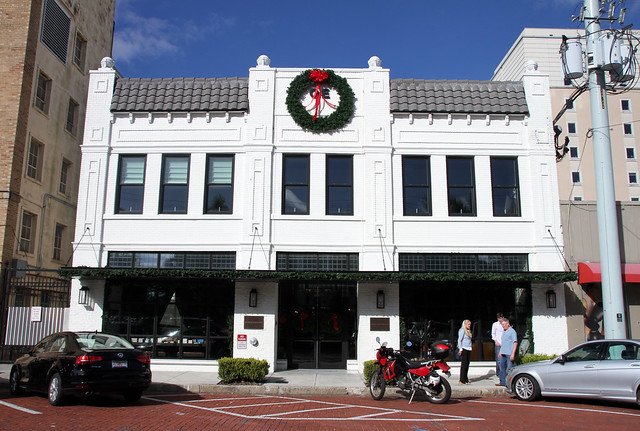 The restaurant is tucked nicely next to the University of Tampa, nearly downtown, in that bit of the city that residents like to call their “SoHo,” as in, “South of Howard Avenue.” At night, the neighborhood turns into a collegetown party strip, but on a lazy Sunday afternoon, it’s mostly just tourists visiting the beautiful Henry. B. Plant Museum across the street.

The good thing about the wait at Oxford Exchange is that there’s plenty to do while you’re there. The space is huge—almost four restaurants and shops in one—with a front bookstore, a separate coffee and tea shop with plush leather couches, a sunny terrarium with tables and a fountain, a front shop with heavily curated and gorgeous knick-knacks, and then, of course, the bustling restaurant itself. 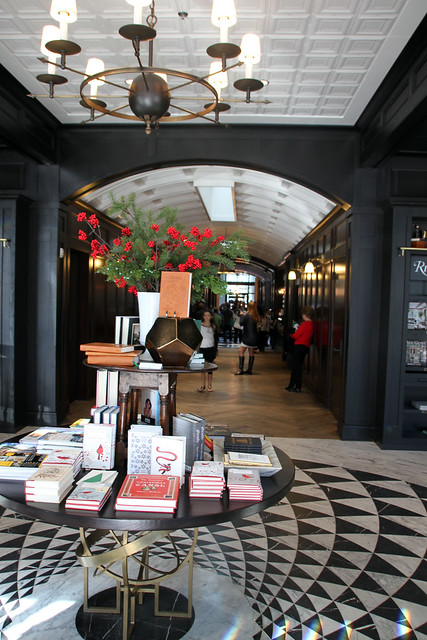 For this New Yorker, who is used to squeezing into teeny railroad cafes with a hundred other hungry brunchers, all of this open space was just delightful. In fact, I was so amused pouring over the beautiful selection of fashionable coffee table books and homewares for hours—I barely noticed the wait. 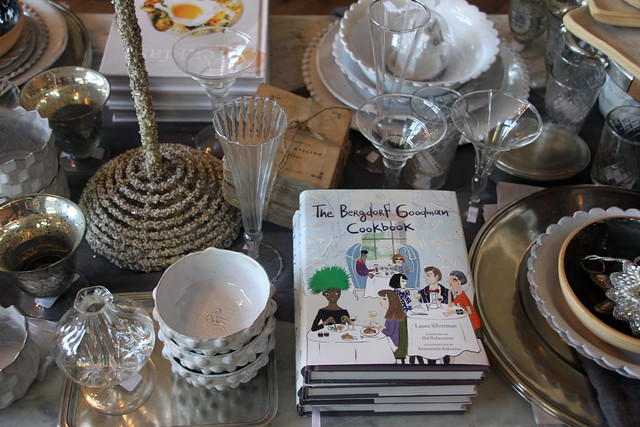 The space itself is stunning. It’s filled with light, thanks to the glass-roof in the conservatory and the many skylights and large windows. It’s also filled with beautiful details that bring to mind its London inspiration—a large, wooden staircase, exposed brick walls, and beautiful black-and-white tiled floors. It is, perhaps, one of the rare places in Tampa that is chic and charming all at once. 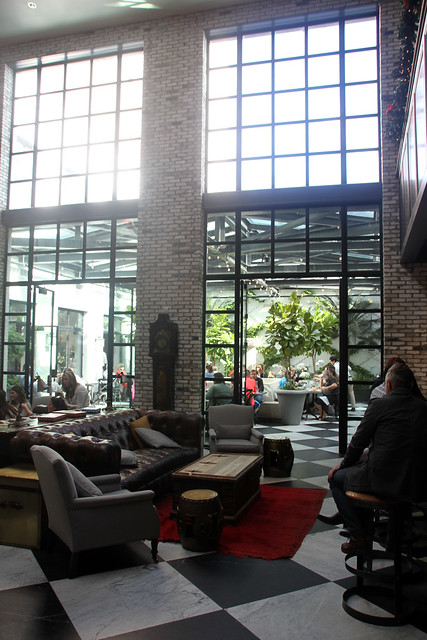 When we finally got to our table, a very cushy leather booth complete with amazing people-watching, we were ready to relax. The waitress explained that there are a few menus. There is the coffee and tea menu, of which the tea selection is quite large, hot or cold. The beverage and cocktail menu, which was chock full of wines and cocktails.

And then, finally, there was the brunch menu, which was more of a Florida lunch menu, with mostly sandwiches, salads and flatbreads, with only a few egg dishes. I was marginally disappointed, but my brother explained that brunching isn’t such serious business in the Sunshine State. And we should focus on the good things that were being offered, instead.

Like the crispy fried Brussels sprouts, which we ordered to share as a starter. The dish sounds amazing—I love Brussels sprouts and have a weakness for fried things, so why not? They arrived large and piping hot, but while they were cooked nicely, they didn’t have a ton of flavor. 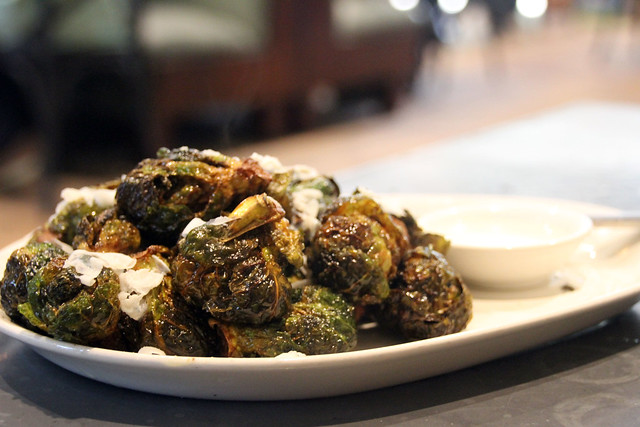 Our cocktails took ages to arrive. The Bloody Marys came with “caprese” bits (read: mozarella, a plum tomato, and an olive on a stick). They were good but not grand, lacking a spicy kick. The iced coffees and teas, however, were very tasty and were served practically in boats—enormous glasses, which is just how I prefer my coffee (if an IV is not readily available). 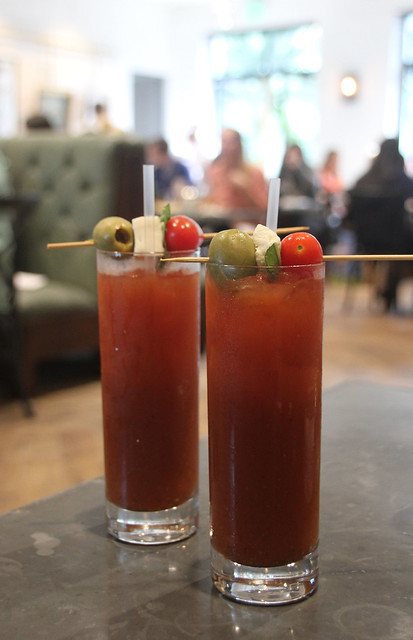 The entrees arrived with much more haste than our cocktails, almost immediately after the Brussels sprouts and Marys, which lead to a rather rushed brunch. I like a cocktail and an app to start, take my time and relax, and then get to the main course. Instead, the table felt crowded and we felt rushed, the waitress bustling about and barely checking on us after our meals arrived.

Everyone at the table loved their brunch entrees. My Dad had the mahi mahi tacos, which were not only gorgeous on the plate, but perfectly spiced and fresh. My brother practically inhaled the brunch burger, which he wisely ordered with avocado. The fried egg was perfectly cooked for a burger, and the meat tasted delicious. 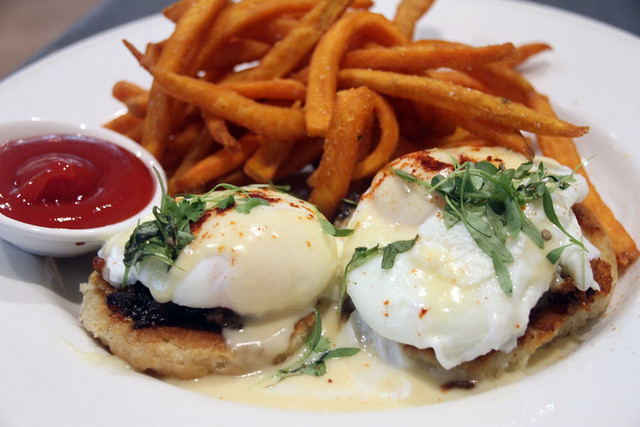 The omelet was nicely filled with vegetables and came with a mound of potatoes on the side. I ordered the Egg Benedict, which came not with ham or any substantial protein, but rather with bacon jam, which was bits of caramelized bacon. Honestly, it wasn’t enough meat for the big poached eggs, and the biscuit was falling to pieces. Sadly, I was disappointed by the entire dish. 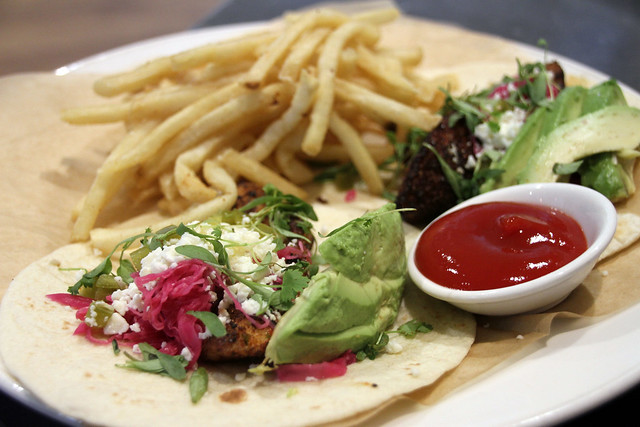 The entire experience was sunny and relaxing. Compared to New York, anyway. The place was bustling with tables of girlfriends giving each other holiday presents—this is clearly the place to see and be seen at brunch o’clock in Tampa. The only problem is, this New Yorker wasn’t so enamored with the quality of the food itself.

The Bitches say: B-. One of the best brunch spots in Tampa, by far, but the menu could use a bit of work, and the flavor of certain dishes and cocktails needs a good punch.