It’s hard to picture brunch in a hotel without thinking of high tea and tiny triangle shaped sandwiches. It’s also hard to picture hotel food nowadays without hoping to be surrounded by the ultra chic, minimalistic concepts we’ve seen at The Line Hotel and Eaton Workshop. However, Opaline fits into neither of these categories. Opaline is an upscale brasserie where service is just as important as food—and they make it their mission display just that.

Rightfully located amongst other downtown fancy spots like the Hamilton and the Jefferson, Opaline sets itself apart with its new world Parisian flare. Retro, mustard yellow suede fabric lines the seats, while royal blue accents and silver metallics adorn the walls and fixtures. The space is sterile but comfortable. After being greeted by staff seriously trained in hospitality, we know we would be well taken care of. 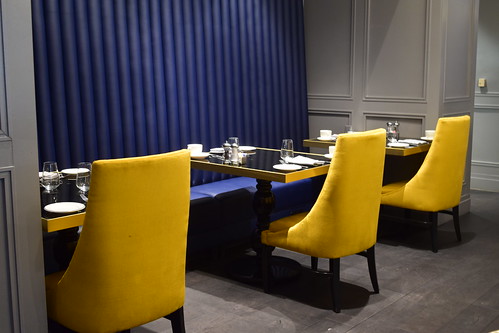 The waiter provided some guidance to my group about the cocktail menu and suggested we order the D.C. Old Fashioned, the Seasonal G&T, and, their signature, the French Daiquiri.

If we learned one thing from this fancy brunch endeavor, it’s that a luxe hotel carries fantastic liquor. The classic Old Fashioned and Seasonal G&T became more floral and aromatic when made of the top shelf stuff. While this may be obvious, you know very well your standard brunch is using the middle or bottom shelf liquor. That said, these drinks were perfectly concocted and lovely to sip on for a Sunday morning. The French Daiquiri was a cocktail with some paired entertainment, as a spritz of absinthe was sprayed from an ornate perfume-like bottle. 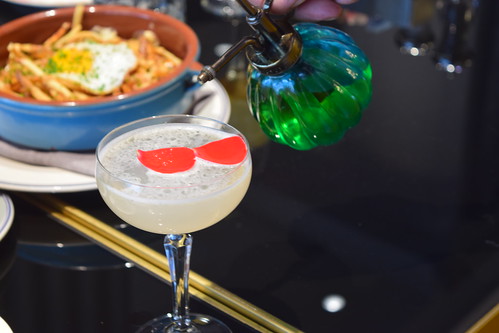 For the table, we started with poutine, a dish that hails from the Canadian province of Quebec, which consisted of fries, gravy, and cheese curds. The gravy was rich, salty, and brunchified with an egg. The dish was piping hot and had an upscale presentation in a clay oven, making the greasy fried mess slightly more glorified. 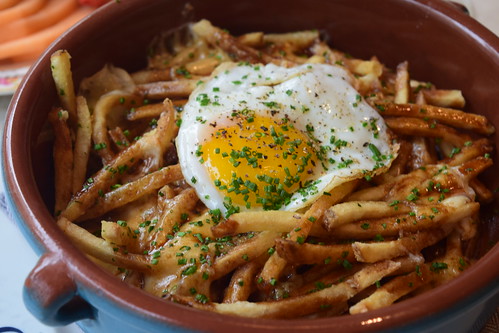 The entrees were equally as delicious and well-presented. We ordered a traditional steak frites, pork belly skillet, and the salmon avocado toast. The steak frites was a high quality, simply prepared, prime NY strip. The medium rare slices of meat and crispy fries soaked up an imperative herb butter drizzled over the plate.

Skillet eggs are better with bacon, but skillet eggs are exponentially better with pork belly. With sautéed veggies and oozing cheese, this dish was highly satisfactory in achieving that perfect bite with all the various savory components. 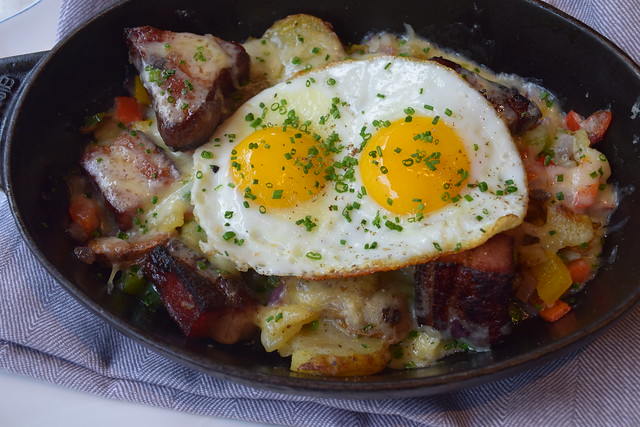 The avocado toast was beautiful and tasteful with crunchy, sour, pickled red onions, but it was nothing to write home about. We’d probably stick to the French foods at Opaline. 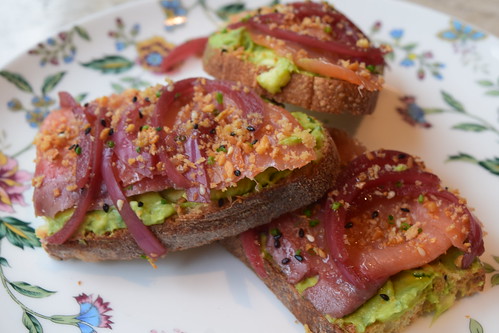 You can’t claim to have balled out on brunch without a dessert of sorts. We ordered the monkey bread cinnamon roll and were pretty impressed. You couldn’t have just one bite of this. The pastry was a mixture of a phyllo dough baklava and a caramelized cinnamon roll. The two essences came together as one in an elegant swirl formation. 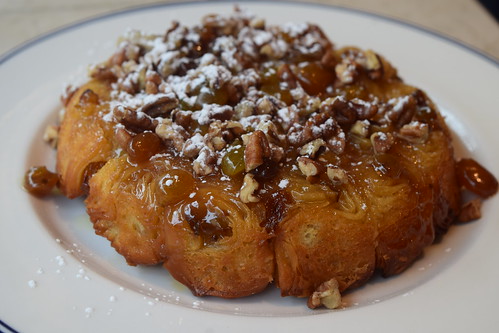 The Bitches say: four Champagne flutes. The service, aesthetic, and flavors are amazing. While nothing blew us away, this brunch is perfect for a large special event, or a delicious meal with the family.